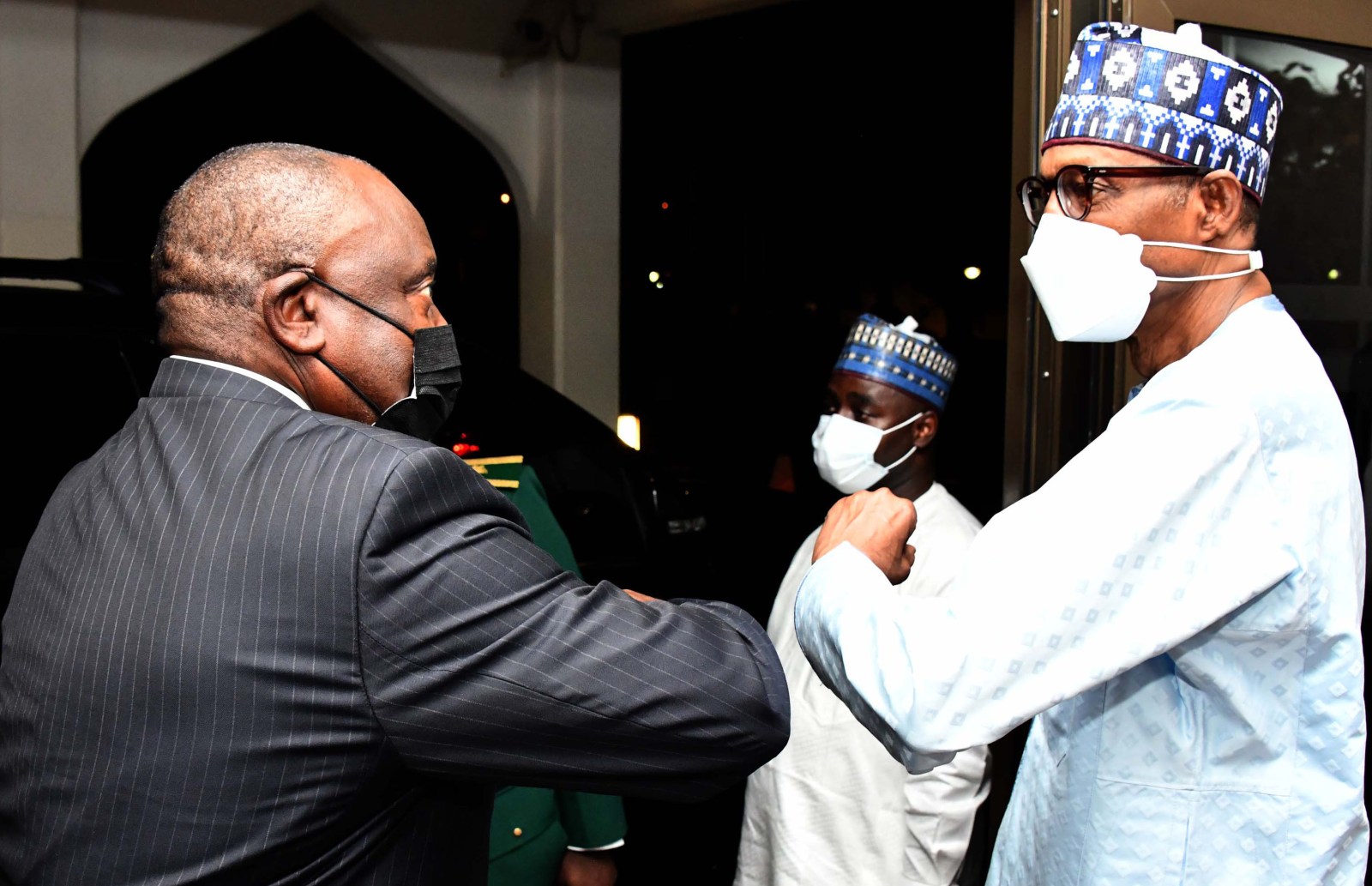 ‘We cannot run away from this [Nigerian] market. It’s far too important a market, the largest economy on our continent, and we are also a big economy,’ said President Cyril Ramaphosa during a trip to Nigeria on Wednesday as part of his tour of West Africa.

The presidents of Africa’s two largest economies spent four hours behind closed doors at the presidential residence, Aso Villa in Abuja, on Wednesday to talk about mutual cooperation and trade. Underlying it all were the deals that President Cyril Ramaphosa said he was in West Africa this week to make.

Although he called Ramaphosa his “brother”, Nigeria’s President Muhammadu Buhari did not lay on much pomp and ceremony – there were no flags lining Abuja’s streets, and the number of delegates in meetings was trimmed due to Omicron fears – but there were “fruitful engagements and measurable outcomes”, including conversations over dinner between the presidents on Tuesday night, as Ramaphosa arrived.

It was a meeting low on emotions but high on expectations. The 10th Session of the Nigeria-South Africa Bi-National Commission added three agreements to the 32 previously signed between the two countries, speaking to youth development, audiovisual cooperation and the field of arts and culture. Existing agreements include those on military cooperation and mineral processing, Buhari said.

It’s not clear whether the discussions between the two countries in previous years on preventing xenophobic attacks on Nigerians in South Africa, for example, were resumed, because Police Minister Bheki Cele is said to have left early to attend to unrelated matters back home.

Even the business forum, held on the sidelines in the Transcorp Hilton Hotel, one of the most imposing of Abuja’s many imposing buildings, saw a number of speakers cancelling or simply failing to turn up due to travel bans related to the Covid-19 Omicron variant.

On the sidelines, Trade and Industry Minister Ebrahim Patel told Daily Maverick that the visits by Ramaphosa and his delegation this week to Nigeria, Côte d’Ivoire, Ghana and Senegal were about trade and the African Continental Free Trade Area (AfCFTA) agreement and “planting the relationship seeds that can enable the legal agreements [related to the agreement] to kick in”.

“In the last number of years we have been trying to get a new legal regime through the African Continental Free Trade Area. What this visit is, is consolidating the presence of southern Africa’s most industrialised economy with some significantly industrialised economies in West Africa,” Patel said, referring to Ramaphosa’s four-country tour this week.

Although the legal regime was necessary, it wasn’t as significant as “getting the political relationships strengthened”, which is what Ramaphosa was aiming to do.

The trip also follows a state visit to South Africa along the same trade lines by Kenya’s President Uhuru Kenyatta last week, representing the most industrialised economy in East Africa.

The AfCFTA was operationalised on the first day of 2021, but it has been off to a slow start due to a number of other practical and logistical difficulties. Trade also decreased in 2020 due to Covid-19 restrictions. Talks are still ongoing around some of the details of the agreement.

Patel said the initial hesitance of Nigeria in April 2018 to sign the agreement, due to fears by manufacturers that their industry would be disadvantaged, have waned.

“Nigeria is very keen to industrialise,” he said, adding that the country believes its sector could grow.

Nigeria’s repeated concerns about the AfCFTA have mainly been around three areas: rules of origin, customs administration and complementarity of trade.

“Nigerians tend to favour a higher rule of origin, and South Africa and Nigeria have common cause on this,” Patel said.

In terms of customs administration, both South Africa and Nigeria had experience of goods smuggled in from outside the continent, especially Asia, “so both recognise this as a gap that will need to be addressed as part of the AfCFTA, but we have technical teams to address that”.

Nigeria’s concerns about complementarity of trade centred on growth opportunities. “When you have such a large domestic market [as Nigeria], the scope is for the Nigerian market to grow through just the opportunities here.”

Nigeria, with a population of 206 million, is currently the largest single market on the continent with just more than 1.2 billion people.

Trade between Nigeria and South Africa in 2020 totalled R41,8-billion, but Patel said the countries want to push it back up to R60-billion, where it was headed in 2019 before the Covid-19 pandemic.

South Africa’s imports from Nigeria far exceed the value of its exports due to the oil it buys from that country.

During an unscheduled stop first thing on Wednesday morning, Ramaphosa told the 17-year-old Nigeria-South Africa Business Chamber that he was aware of businesses facing challenges. A number of retail businesses, such as Woolworths in 2013 and, more recently, Shoprite and Mr Price, left Nigeria, with Tiger Brands joining the fray in recent months.

The MTN Group, which was fined millions after the Nigerian government complained that it was failing to comply with regulations such as the registration of SIM cards, remains in the country and remains profitable.

Ramaphosa, who was a board member at MTN when it set up shop in Nigeria in 2001, said: “I know that there is a maze of challenges, regulatory and arbitrary.”

These had to be addressed. “We cannot run away from this market. It’s far too important a market, the largest economy on our continent, and we are also a big economy,” he said.

There still are fundamental differences in approach by both countries. The issue of Buhari’s five-month-old, indefinite Twitter ban, for example, which speaks to freedom of speech and the ability of people to do business, was “a matter of four eyes”, a minister said, meaning any discussions about this would have been confined to talks between the presidents.

Whereas Ramaphosa went out of his way to thank the media for their presence and their “valuable role in communicating the work that is being done”, Buhari, at the same press conference, made a joke about the media delegation that was slashed after a last-minute request from his office.

Out of the nine journalists travelling with Ramaphosa, only a cameraman and a radio journalist were allowed, ostensibly due to Omicron fears. The single question that was allowed, on the underlying reasons for the hurdles and constraints that remained for business, was referred to the “press release” by Buhari and diplomatically responded to by Ramaphosa.

Ramaphosa’s departure to his next stop, Abidjan, from Abuja’s Nnamdi Azikiwe International Airport was delayed by more than an hour as officials said Buhari was also due to take off for Dubai to attend Expo 2020. DM