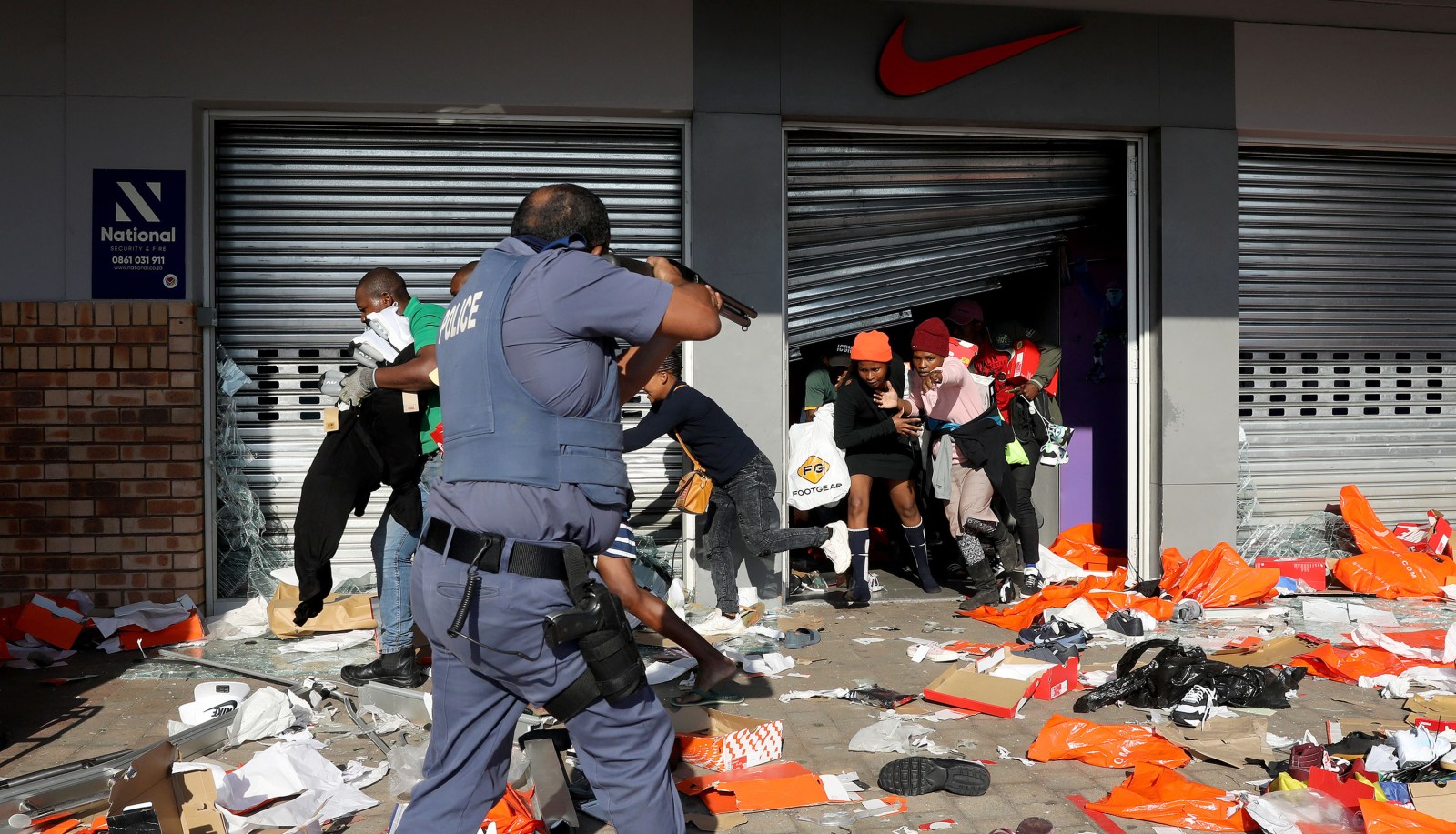 A member of the South African Police Service tries to control looting in Durban on 12 July 2021. (Photo: EPA-EFE / STR)

‘When the defence force arrived [in KZN] there was no cooperation whatsoever from the people responsible here… the provincial commissioner,’ said Nosiviwe Mapisa-Nqakula.

The speaker further told commissioners Andre Gaum, Chris Nissen and Philile Ntuli that Lieutenant-General Nhlanhla Mkhwanazi had frustrated the efforts of the SA National Defence Force (SANDF), which had been deployed to the province to support the SA Police Service (SAPS) as the riots could not be brought under control.

The police were wholly unprepared, outnumbered and in most cases absent as thousands of criminals took to the streets — some by foot, some via car, many armed — to loot malls, pharmacies, warehouses, businesses, ATMs and industries.

A letter sent to the SAHRC by Police Minister Bheki Cele and referred to by evidence leaders on Monday said Cele had not received any early warning intelligence reports from the national commissioner, General Khehla John Sitole, about the unrest, which cost the province R20-billion in losses, terrified investors and residents and left more than 300 people dead.

According to Cele’s letter: “The office of the minister, and the minister himself… did not receive any such early warning intelligence [as previously reported] from the South African Police Service [ahead of the unrest]. The office has subsequently learned that this report was seemingly distributed to, inter alia, the national commissioner, General Sitole, Lieutenant-General [Fannie] Masemola [the deputy national commissioner for policing], and senior managers within the division Crime Intelligence.”

Cele also stated in his letter that “Since December 2020 the minister had not received any intelligence report briefing from the SAPS on any matter.” Nor had the State Security Agency furnished him with a report or a briefing, said Cele.

One of the SAHRC’s evidence leaders, advocate Smanga Sethene, had asked Mapisa-Nqakula to read parts of Cele’s letter into the record.

Cele was expected to testify at the commission on Monday, but had to be excused as he was out of the country on police business. National Commissioner Sitole, however, had testified earlier in the day via a video link. He was also out of the country, attending an Interpol conference in Turkey.

The acrimonious relationship between Cele and Sitole has been well documented and has been punted as a possible reason by commentators and political parties as to why the July unrest was not sooner and much better handled by the men and women in blue.

Fanning the flames was the Supreme Court of Appeal earlier this month upholding a high court ruling that found Sitole, with two subordinates, in breach of duties relating to the procurement of a R45-million “grabber” surveillance device before the ANC’s Nasrec elective conference in December 2017.

The unrest started with the jailing of former president Jacob Zuma on a contempt of court charge. (Zuma has since been released on medical parole.) Supporters of Zuma had gathered at his Nkandla homestead to ensure that he was not jailed, and from that venue, and via social media platforms, threats were expressed freely about how the country would pay the price in the form of protests if Zuma was incarcerated.

After hours of “negotiations”, Zuma handed himself over to the police at his homestead and was rushed to the Estcourt Correctional Centre in the early hours of 8 July. That night, sporadic reports of unrest and trucks being looted and torched — not uncommon in KwaZulu-Natal — were received by journalists, and presumably by the police.

Mapisa-Nqakula told the commission that on Saturday, 10 July, she received a phone call from President Cyril Ramaphosa where the two agreed that it was “not yet necessary” to deploy SANDF troops to support the SAPS. She said there was no indication at this stage from police that they were overwhelmed by the unrest.

By Sunday, 11 July, Mapisa-Nqakula said Ramaphosa had phoned asking for the deployment of the SANDF.

She said she “picked up the phone and spoke to the minister of police. And he said, ‘Ja it’s actually about time.’ [Cele] then sent the request in writing, [I co-signed it as requested by legislation] and sent it to the president.”

This was done without any intelligence reports, according to Mapisa-Nqakula, which was confirmed by Cele’s letter to the SAHRC.

“The first [priority] after the deployment of SANDF was to take care of national key points, because at the time the police said they could still manage the crowds and looting. In KZN, the starting point was the oil refineries in Richards Bay, and the trade route between KZN and Johannesburg (N3), which was taken over by looters.”

Asked to explain the change in numbers, Mapisa-Nqakula said it was not up to the president to determine troop numbers. This was the realm of those in Operations. “[At first] they decided 2,500 would be enough as the soldiers were to be employed at national key points, with police doing crowd control and protection at malls.”

When the number was increased to 10,000 on 13 July, the feeling was, “it can’t just be about protection of national key points. You needed soldiers to move in and assist police with crowd control.

“On Wednesday, 14 July, in the morning, the president, key ministers and political parties all met. The politicians had to be informed as parliamentarians. They said, ‘Thanks for increasing numbers’, and said, ‘Because we don’t know how far this will go, we need to increase the number to 25,000.’ It was a pure political decision.”

The SANDF was deployed in townships in KZN where there was looting, said Mapisa-Nqakula, such as Umlazi, Phoenix and others that were determined by the police.

Referring to the written statement she had submitted to the SAHRC regarding the unrest, advocate Sethene said it painted a picture of non-compliance by the SAPS.

“When the defence force arrived [in KZN] there was no cooperation whatsoever from the people responsible here… the provincial commissioner,” said Mapisa-Nqakula.

Sethene said: “You go to the extent of saying the provincial commissioner, during the process while [troops] were deployed here, he went on paternity leave. And he was also reluctant in furnishing you and your colleagues in the executive with information. And you say assistance was only provided by an acting provincial commissioner whose name you say you can’t remember in your affidavit.”

Mapisa-Nqakula agreed. She said that before the SANDF had arrived in KZN, she had been informed that there was “a problem” with an SANDF colonel deployed to KZN to understand what was happening on the ground.

Moving on to the killings that took place around the province that were allegedly racially motivated, Sethene said that according to Cele’s letter to the SAHRC, the SANDF generals were ready to move in, but that there was “no coordination from SAPS”.

In other words, the army could have been on the ground in the areas where alleged racial and other violence had taken place, and possibly quelled it.

“I confirm [that],” said Mapisa-Nqakula of Cele’s assertions in his letter. She said the SAPS not cooperating “ought to have frustrated all of the ministers responsible for security”.

Mapisa-Nqakula said when she arrived in KZN and met other ministers, Lieutenant-General Mkhwanazi and others, thinking it would be about the unrest that was taking place, the meeting was stopped “and digressed and was diverted into discussing other concerns that had nothing to do with what we were [in KZN] about”.

Mkhwanazi had shown “signs of disrespect” on the first day the ministers and others met, she said. It would have been Cele’s job to address this, she added.

“The issues [Mkhwanazi] raised with us had to do with other issues that we as the JCPS [justice, crime prevention and security] cluster had not approved, they had nothing to do with what was happening at the time. He was like pushing our backs against the wall, [saying] that if you [JCPS] had approved… the grabbers for the police, we wouldn’t be in this situation now.

“But the people who are responsible for collecting, for intercepting communication, it is the mandate of State Security, and then State Security shares the information with the police. I think for me, that’s what was frustrating. I didn’t think that was the appropriate forum and time [to raise those issues].”

Mkhwanazi is expected to testify within the coming days. DM