Drawn out: Zapiro’s latest annual book reflects the political climate — where the ‘wheels of justice are grinding slowly’ 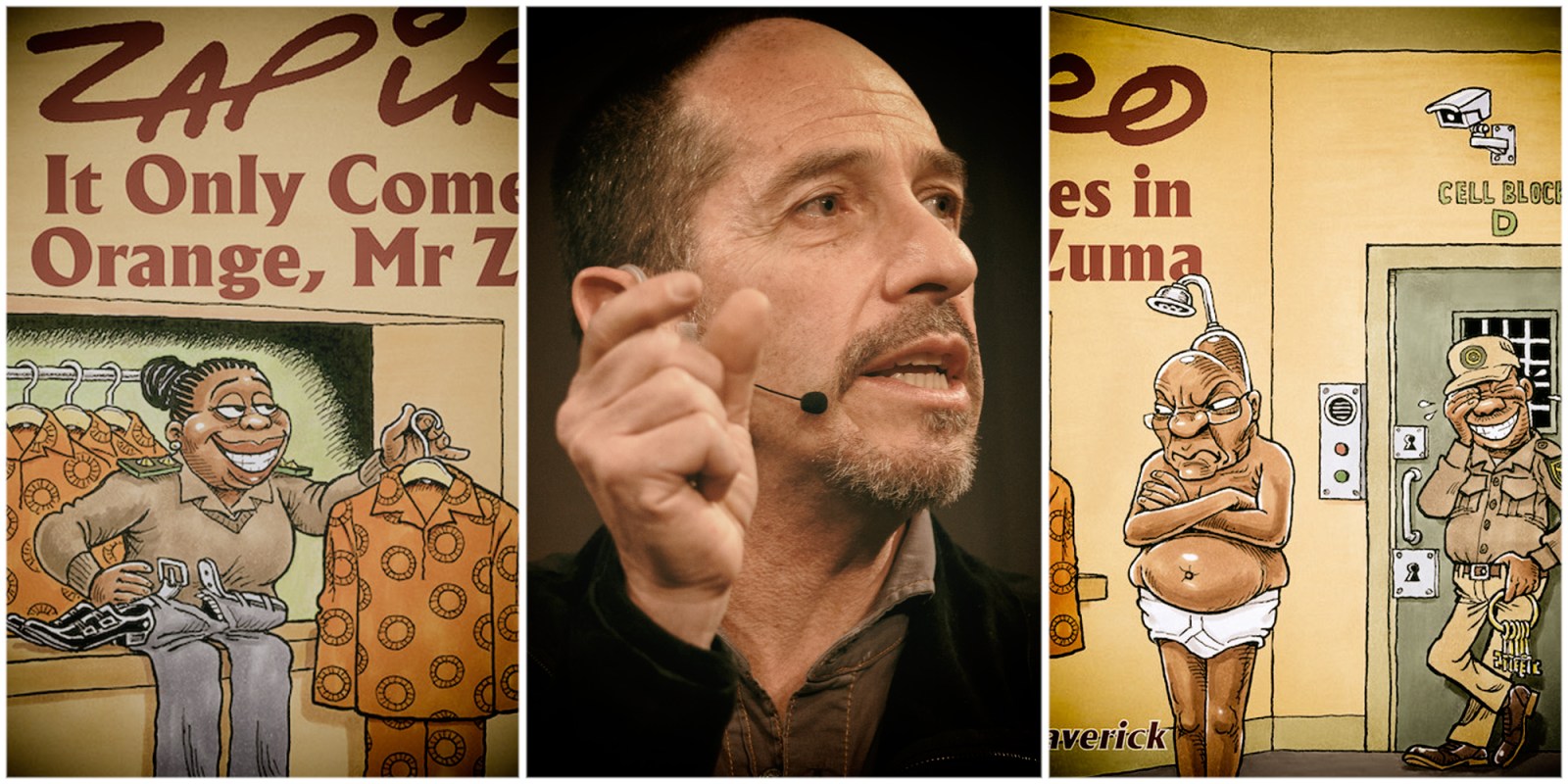 On Tuesday evening, at a Daily Maverick webinar, cartoonist Jonathan Shapiro shared his creative process and discussed what he aims to do with his work.

In Zapiro’s 2021 Annual: It Only Comes in Orange, Mr Zuma, the award-winning political cartoonist captures the current socio-political climate where it feels like the “wheels of justice are grinding, [albeit] slowly”, said Jonathan Shapiro, aka Zapiro, on Tuesday evening at a Daily Maverick webinar.

“[The book] is a bit hopeful because there are processes that are in motion,” said Shapiro.

These “processes in motion”, include the trials of suspended ANC Secretary-General Ace Magashule and former president Jacob Zuma.

During the webinar, Shapiro showed the viewers a 30-minute presentation of some of the cartoons included in the 112-page book.

Explaining the context of one of his cartoons, of President Cyril Ramaphosa appearing at the Zondo Commission, Shapiro said: “Whenever he was asked a question either by [the Deputy Chief Justice, Raymond] Zondo or the evidence leader, he’d say something like, ‘In hindsight, we could’ve done it differently.’ ”

This led to Shapiro drawing Ramaphosa at the Zondo Commission, sitting on a chair but looking back — “because hindsight means he can’t see forward” — while his spine is hung on a coat-hanger.

One of the “sombre” cartoons Shapiro showed attendees was the discrepancy when it comes to the protection of whistle-blowers and those involved in corruption.

In the cartoon, titled High Risk, the corrupt get security guards and multiple cars to ensure their safety, while those exposing corruption are left to fend for themselves. At the bottom right of the cartoon, Shapiro writes: “RIP Babita Deokaran and an undetermined number of whistleblowers who’ve paid with their lives.”

It speaks to the “absolute isolation whistle-blowers face”, said Shapiro.

Daily Maverick’s Marianne Thamm, who hosted the webinar, asked Shapiro how he’s able to take complex issues and make them easier to understand through his cartoons.

By listening to the radio and reading newspapers, answered Shapiro. “There are interesting discussions [on the radio]. It’s interesting to hear what people are thinking; we all know the politicians are out of touch.”

When asked by an attendee how he strikes a balance between political commentary and humour, Shapiro said that as a political cartoonist, his primary aim is to communicate.

“Many of us believe in advocacy and it’s not always for entertainment. Many of the South African cartoonists, especially the ones who emerged from the 1980s, often go in on the [political] issues.”

As to his process of drawing a cartoon, Shapiro said he kept a notebook in which he would make notes of topics, then start sketching the cartoon.

He’d also play around with words for titles. For instance, when he drew a cartoon where Magashule, former SAA chairperson Dudu Myeni, Zuma and former Social Development Minister Bathabile Dlamini are in a jail cell, Shapiro said he initially wanted to title it Friends: The Reunion after he’d heard that the US sitcom would be having a reunion episode.

He admitted that as much as he aims to push boundaries with his work, he has “a degree of caution around punching down”.

“If I feel that people will think that the cartoon is stereotyping, then I hold back.” DM