The final word: When an IEC result centre goes into security mode for a presidential visit… or the securocratisation continues 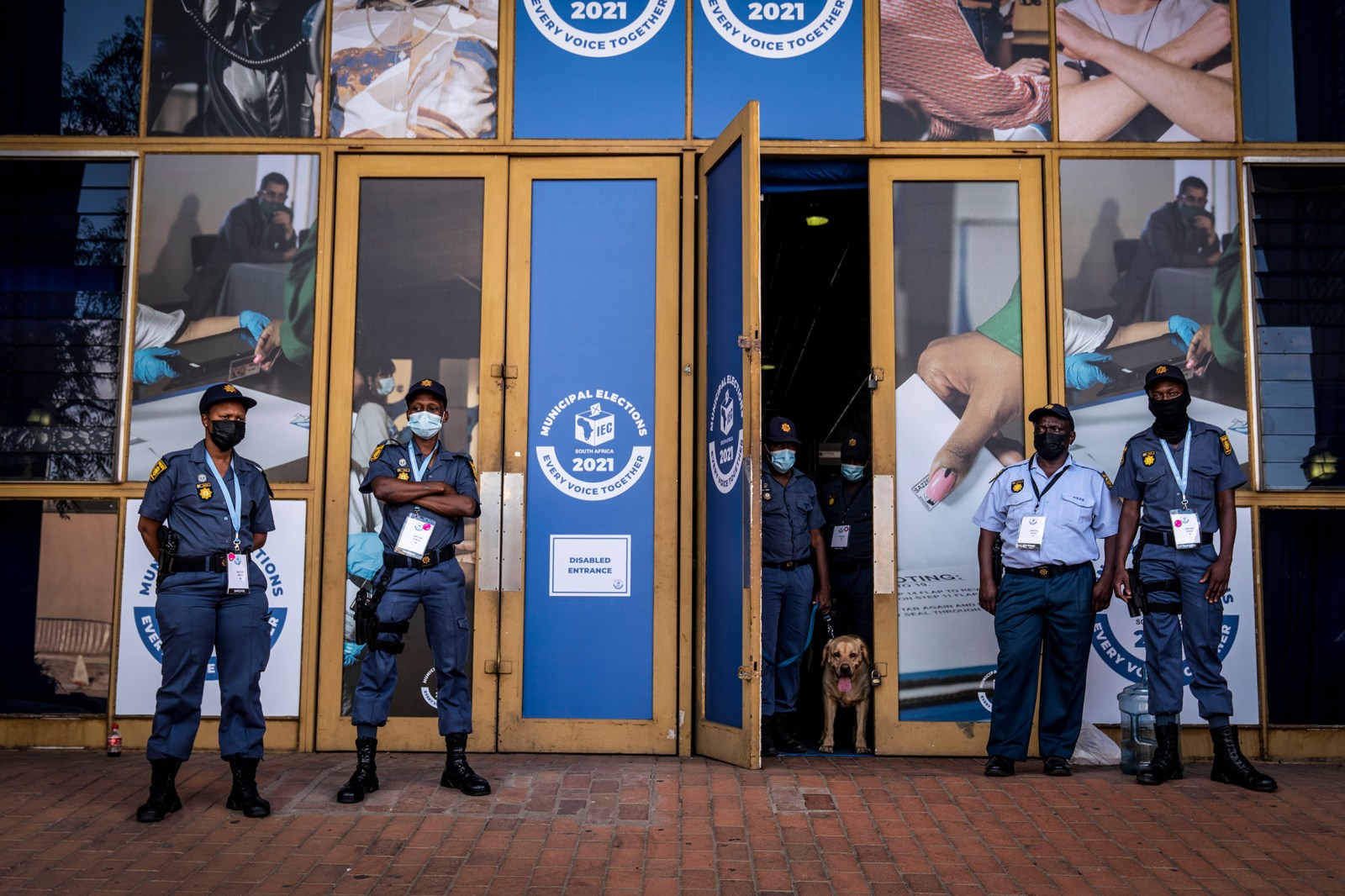 That something was up, became clear late on Wednesday evening when groups of uniformed police popped up outside and inside the IEC Tshwane national results centre. On Thursday, the show of security was on full display — while election business was still in process.

At least 10 hours before the scheduled visit by President Cyril Ramaphosa for the closing official results announcement ceremony, the crackdown started. At least visibly, at the Electoral Commission of South Africa (IEC) Tshwane national Results Operations Centre, aka ROC.

The security services, uniformed and in civilian clothes, arrived while the election processes were still under way, with vote capture yet to be finalised and council seats determined. The security presence is a securocrat creep into the domain of the IEC, established in the Constitution as one of the institutions to support democracy.

“These institutions are independent, and subject only to the Constitution and the law, and they must be impartial and must exercise their powers and perform their functions without fear, favour or prejudice,” according to Section 181(2) of the Constitution. “No person or organ of state may interfere with the functioning of these institutions.”

For at least three days, the Tshwane ROC was a hub of election commission officials, political party representatives at their desks on the floor, and journalists — all interacting alongside the regular formal IEC briefings. Police were visible, keeping watch in the background. Access was regulated and movement monitored by cameras, but also by scanning the accreditation tag barcode on exit and entry.

After Wednesday’s increased police presence at the ROC, Thursday’s security clampdown started on Pretoria Street, where high visibility security cones for the first time in days marked Gate 9, or the entrance. A few more metal fences seemed to have popped up.

By 8.30am a phalanx of security services staffers dressed in dark suits — their and the spooks’ tags state: “SAPS/VOC” — swarmed off from the VIP entrance. Labelled as such, the red carpet and potted greenery have, over the past days, greeted all the IEC commissioners dropped off there.

But the final indicator that the ROC was no longer the IEC’s was when the friendly thumbs-up stickers that had been handed out every morning after the Covid-19 health check were replaced by pink strips.

Those stickers are a favourite for police access control. It’s easy — set the colour for the day, and whoever doesn’t have it can be removed from premises, events, wherever. Maybe clinch an arrest.

The uniformed police patrolled inside and out as the handful of men in black suits and lapel badges exploded into a presence of plenty. Aside from walking purposefully up and down, their jobs included sitting guard at the entrances to the dining hall, which closed down at 2pm, causing some hungry diners to hastily gobble their food.

The prep work for all this security stuff would have started earlier, in late-night and early-morning meetings of the joint operations centre and the NATJoints — the structure that brings together cops, spooks and soldiers, but is not publicly accountable to Parliament, or anyone else for that matter.

The show of security, and the show for the VIPs like the president, included fancy temperature-reading gadgets being installed at the entrances. Up until Thursday afternoon, a handheld thermometer and declaration had been sufficient.

The show of security also meant that everyone, despite having passed the Covid-19 health protocols earlier in the day, had to redo the whole health check. Fancy computerised stations were rolled out to capture personal details.

The purpose? Acquiring the coloured wristbands that became mandatory for access for the evening ceremony where the 2021 local government results were declared.

Green for political parties and some diplomats, gold for the VIP VIPs, including other diplomats and ANC officials like Treasurer Paul Mashatile and Police Minister Bheki Cele. Blue wristbands were for the media, service providers, security and pretty much everybody else. The gala dinner was only for those with gold and green wristbands.

A strict “No wristband, No access!” rule applied at the gala dinner, but also to allow journalists, service providers and others back into the ROC after the 2pm K9 security sweep in anticipation of the presidential arrival.

The police officer who took the lead once the doors to the ROC reopened made sure his teams knew — no wristband, no access. The presidential protection types quickly melted away after having corralled everyone from the centre entrance; it seems the bedraggled flower pots were in need of sweeping for bugs.

That sweep meant everyone had to leave the results centre — interrupting live broadcasts and bringing the election results, now at the stage of finalising council seats, to the South African public. Elections, after all, are about the voters, aka The People.

If all this is required for a presidential appearance at a closing ceremony, then perhaps it’s no wonder Ramaphosa was the first president not to do the traditional meet and greet of IEC staff on the floor to thank them for days of ceaseless work to get election results done with integrity.

That the IEC has allowed this level of securocratisation of its ROC is astounding. The business of elections was still under way when security services took over the premises. (Note: For this reporter, who has covered elections since 1994, what unfolded from Wednesday was heavy-handed, to say the least.)

Asked for a quick comment, the commission said security arrangements were “normal”. And as to any possible tensions on the floor, including between media and commissioners, that would be human fallibility. The media and everyone else were guests of the IEC and treated as such, was the response.

But at times it seemed that the IEC was distracted, perhaps under pressure. The body language displayed on stage when the commissioners briefed the media and others at the ROC was awkward at best.

When asked whether a political party announcing it had won a ward was a contravention of the code of conduct, IEC Vice-Chairperson Janet Love took a sho’t left, answering by quoting the rule on exit polls.

Exit polls cannot be published during voting hours, according to Section 109 of the 1998 Electoral Act. But a political party saying it won a ward, while definitely not an official result, does not amount to an exit poll.

IEC commissioner Dr Nomsa Masuku picked up the thread, saying how from the May 2019 elections the odd practice had crept in of political parties talking about results on the floor. It would have to be considered whether such “unlawfulness” should be allowed, she added.

It was one of those curious moments, because interaction on the floor between politicians, journalists, diplomats and others is a feature of the ROC. And curiouser because the ROC is the IEC’s house.

So the president arrived, as did the guests, some of whom were waved through. And confetti and drums heralded the declaration of the 2021 local government elections.

The biggest so-called security incident was when the wind that came with the late afternoon downpour blew plastic panels into the X-ray machine. The loud noise triggered a rush of people in black suits — police, spooks, presidential security personnel, a group of uniformed SAPS members, including a senior officer (going by the gold on his cap), medics and private security.

With little kerfuffle the iron roller doors at that entrance were closed.

Five years ago at the 2016 municipal elections results announcements, four young women held #RememberKwezi placards before then president Jacob Zuma. A handful of presidential protectors handled that protest, whisking the women away.

If the aim of the heavy-handed 2021 security was to prevent any embarrassment to Ramaphosa, that’s tantamount to misusing state funds and state power to stop what is any politician’s lot — potential public embarrassment and criticism.

The impact of the 2021 securocratisation of the IEC and its constitutional business of running elections remains to be seen.

But South Africa needs a strong, resilient, courageous and independent IEC — with the ending of one-party political dominance, future elections are set to be more acrimonious, more intense and more testing. DM