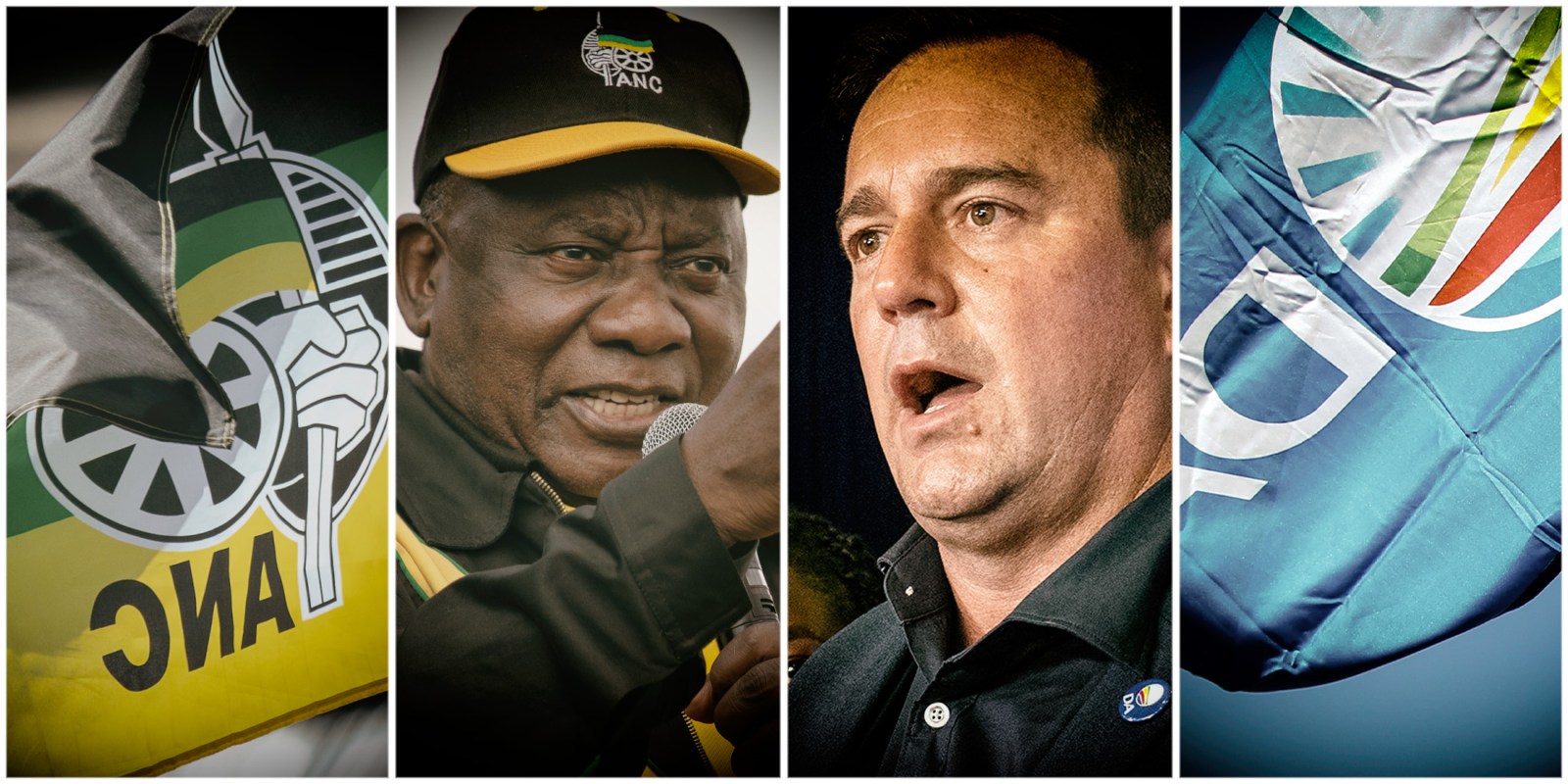 The 2021 local government elections results show coalitions are part of South Africa’s political setup. The poser is how to do it. Indications from the ANC and DA on Wednesday were that they both want to call the shots.

The 1 November 2021 local government elections was one of those moments that define South Africa. Coalitions emerged as a key feature of South Africa’s political setup — as they should, given the proportional representation vote on the back of a clear caution from voters who withheld their votes out of disenchantment and dissatisfaction.

By 8pm on Wednesday night, the number of councils in which no political party had a clear majority had increased to 52, including at least four metros — that’s effectively one in five of South Africa’s 257 municipalities. And it’s almost double the 27 such hung municipalities in the last election of 2016.

“We are moving from dominant political party politics to one of pluralistic politics. We are going to have to think about elections and politics not as a zero-sum game or winner take all, but rather as consensus building,” Apolitical Academy programme director Dr Sithembile Mbete told Daily Maverick.

But, hours earlier on Wednesday, neither the ANC nor the DA seemed attuned to the political moment. Both claimed that strength at the hustings meant the right to lead coalition brokering, after an election marked by an all-time low voter turnout of below 50%.

But, despite the spin, the numbers on Wednesday evening showed the ANC had slipped to 46% polling support — a historic low — and the DA to around 21%, some 3.5 percentage points lower than its 2016 municipal poll showing, alongside reduced seats even in those municipalities it retained.

“The ANC will consider an approach with like-minded parties, including affirming the principle accepted in many countries that the party that received the most votes in a given election be afforded the first opportunity to form a coalition government,” said ANC Deputy Secretary-General Jessie Duarte in a media briefing at the Electoral Commission (IEC) Tshwane national results centre.

Less than two hours earlier, DA leader John Steenhuisen, in a briefing, said that as the strongest party in a council the DA should take the lead in coalition-making.

Those discussions would start as early as Thursday, on a municipality by municipality basis with parties of a similar mindset — and only the EFF was ruled out.

“We are not going to rush into a knee-jerk reaction. It needs to be a deliberate decision that will last the distance,” Steenhuisen said.

The DA’s lawyers have already drafted coalition agreements for others to sign, after negotiations and potential inputs. These agreements would be made public; they include red lines on corruption, interference in tenders and cadre deployment, said Steenhuisen.

If no coalition were possible, the DA would be happy to be a “strong, determined opposition”.

The spectre of a difficult and unstable Tshwane coalition, and the letdown of the one in Johannesburg, have clearly left the DA with a bad taste.

Ditto the ANC. Duarte described a number of recent opposition-led coalitions as “untidy, messy and premised on gaining power as an end in itself”.

The ANC, she said, would do better. An extended National Working Committee would conclude the approach to coalitions and cooperation.

Such decisions will also be taken at the DA’s top national level, with a national team under Steenhuisen leading discussions and talks.

Informally, coalition talks have been under way since late Tuesday. ActionSA has made a good showing in Johannesburg and Ekurhuleni. The EFF had boosted its numbers — to just over 10% of the vote by late Wednesday — to be a kingmaker in a number of councils. So had the Freedom Front Plus, which more than doubled its councillor numbers to 155 — and it seems to be playing the long game of assessing where to make the most impact, like in Oudtshoorn, Western Cape, where it now has a potentially decisive three councillors. The Patriotic Alliance clinched 52 council seats, the Good party 35.

The permutations of council governance will depend on who decides to go where.

It will be a time crunch. Once the IEC declares the election — this is still scheduled for Thursday — a 14-day window kicks in for the councils to hold their first meeting, according to the 1998 Local Government: Municipal Structures Act.

The Speaker, once elected in the first order of council, oversees the election of the mayor. All this requires coalition agreements to be in place.

But those arrangements are what will expose whether politicians have heard the warning that voters sent by withholding their crosses on ballots.

While the DA talked about improved performance compared with the May 2019 national and provincial levels — in the 2016 municipal poll the DA obtained 24.5%, or some two percentage points better than in 2021 — the ANC took to spin, promising to do and to be better.

“Looking at the overall picture that is emerging from results completed, the ANC maintains its national footprint across the country. We remain the leading party nationally and in the majority of districts and municipalities,” said Duarte.

“People are happy with the renewal of the ANC and therefore our nation’s mission in building a better life for all.”

By Wednesday evening it looked as if the ANC may lose outright control of eThekwini, the largest ANC region. The ANC polled at 45% late on Wednesday evening. However, election results capturing had been slow in eThekwini.

But as IEC Chief Electoral Officer Sy Mamabolo said in Wednesday’s evening briefing, like elsewhere, “by daybreak there’ll be an election result”.

While the DA retained Cape Town, it lost its overall majority in several other councils in the DA-controlled Western Cape, including Worcester, Beaufort West and George. It retained Stellenbosch at the cost of two seats; in Drakenstein (Paarl) it retained control, but with seven seats less.

It’s easier to spin these losses, perhaps, than the ANC’s continued flailing performance in the key metros it lost in the 2016 municipal poll — the economic heartland of Johannesburg, the administrative capital of Tshwane, Ekurhuleni, and the Eastern Cape economic hub of Nelson Mandela Bay Metro.

In 2016, voters gave the governing party its first thumping after the Nkandla saga — and an election campaign trail to “explain ourselves”, as the ANC put it. That thumping continued in 2021 with the ANC dropping to 32% in Johannesburg.

The next two weeks of negotiations will show whether humble pie must be shared — in some councils it may not be possible to put coalitions together without the cooperation of a party eschewed on the election campaign trail.

South Africa’s dominant party outlook, at least until now, is that coalitions are “vat en sit”, a colloquialism to describe people living together without being married.

But the proportional representation aspect of South Africa’s electoral democracy naturally lends itself to coalitions. Local government is about local issues and services, after all.

Terry Tselane, the Institute of Election Management Services in Africa executive chairperson, who is also an ex-IEC commissioner, has argued for the regulation of coalitions through an entity akin to the Commission for Conciliation, Mediation and Arbitration.

The reason coalitions are unstable is because no framework exists that would put on the table what is agreed, including service delivery standards and such — and how to resolve differences, he says.

Coalitions may leave many politicians uncomfortable. On top of managing their own party’s factions and fights, such joint governance agreements require management across the party political divide. And compromise.

The next few days will show how politicians will go about honouring the voters’ ballot decisions. And whether South Africans can find a new language of politics to move from dominance to cooperation. DM