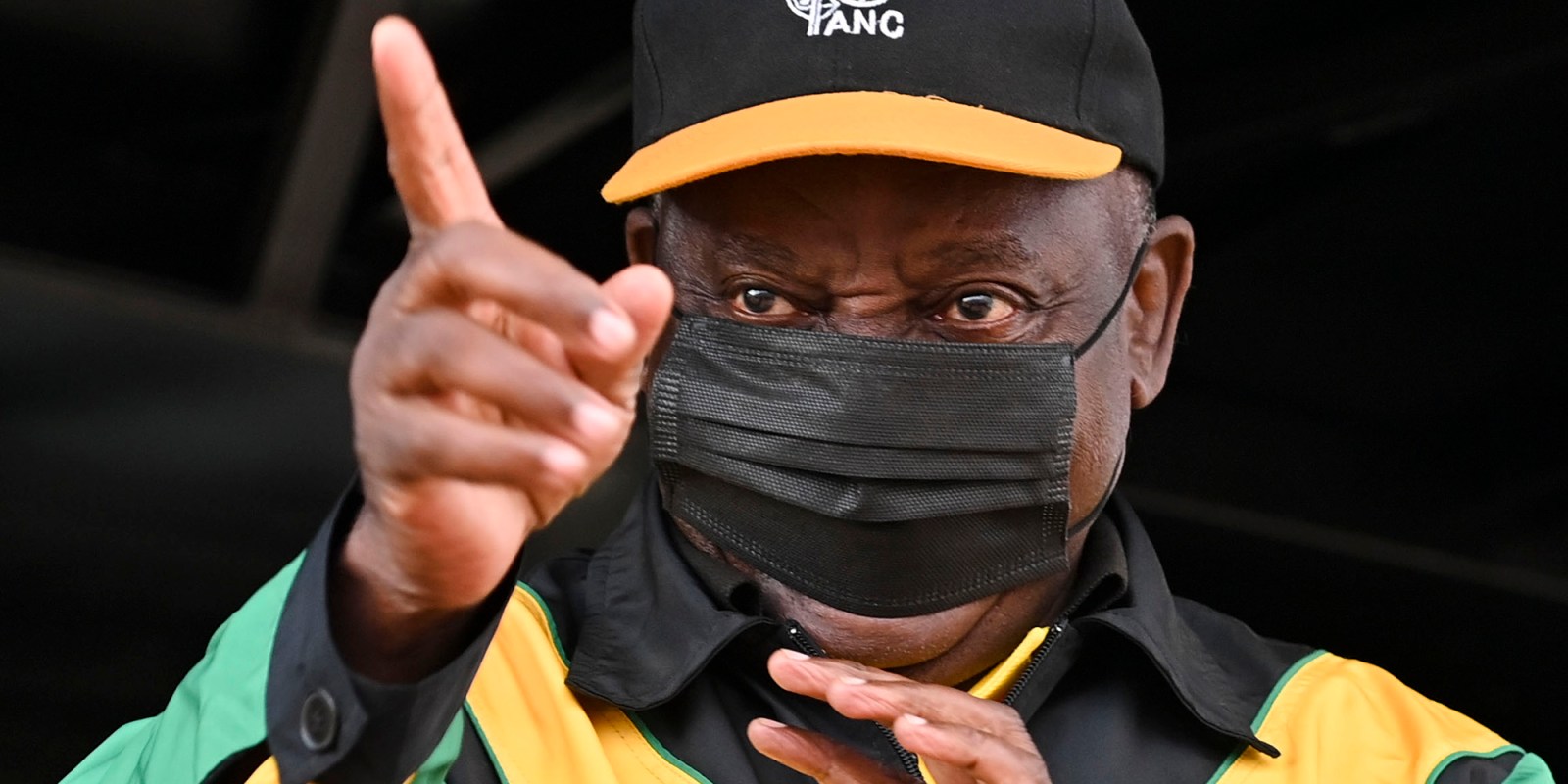 ANC president Cyril Ramaphosa gestures at the audience during his election campaign on 17 October 2021 at the Makwane Sports Ground in Phuthaditjhaba in the Free State. (Photo: Lehlomelo Toyane)

South Africa’s governing party may be heading for its worst showing at the polls since the end of apartheid.

Initial results from Monday’s municipal polls suggest the African National Congress will garner 46.6% of the vote, the CSIR said in a forecast posted on its website. That would be its lowest share since South Africa’s first nonracial elections a quarter century ago, and compares with 54% in the last local government elections in 2016.

A report by News24’s Election Forecaster also forecast on Tuesday that the ANC looks set to dip below 50 percent in national support for the first time in history.

Monday’s vote was the first municipal ballot since President Cyril Ramaphosa won control of the ANC in 2017 and set about trying to rebuild support for the party, which plummeted during his predecessor Jacob Zuma’s scandal-marred rule. The ANC has fallen out of favour because of voter dissatisfaction with poor service delivery, crumbling infrastructure within towns and cities, record unemployment and frequent power outages.

Its performance is also likely to be dented by fewer people casting their ballots, with electoral commission data showing less than 50% of registered voters showed up at the polls. The weak turnout is “an urgent call for the acceleration of reform”, said Razia Khan, head of research for Africa and the Middle East at Standard Chartered plc.

“Much of the focus in South Africa’s local elections will be on whether the ruling ANC manages to get 50% of the vote,” she said. “However, amid reports of the lowest election turnout of any vote since 1994, voter apathy – and what it signals about the degree of political engagement – now looks likely to be the key issue emerging from South Africa’s election.”

The rand was little changed at 15.47 to the dollar by 1.13pm in Johannesburg, while the yield on South Africa’s 10-year bonds fell four basis points. Investors may be more focused on next week’s medium-term budget.

The opposition Democratic Alliance’s share of the vote is expected to decline to 24.8% from 27% five years ago, while the populist Economic Freedom Fighters party is projected to win 9.2%, from 8.2%, the CSIR said.

Newcomer ActionSA, led by former Johannesburg mayor Herman Mashaba, is set to get 1% and the conservative Freedom Front Plus may improve to 3.5% from 0.8%, it said.

With about 27% of the vote counted, the results also show that the ANC will have to rely on smaller parties to form coalition governments in key urban centers including Johannesburg, the nation’s commercial hub.

Opposition coalitions took charge of Johannesburg, the capital Pretoria and other metropolitan areas after the last vote five years ago, gaining control of more than R130-billion in budgets. Those coalitions have proved unstable, with power changing hands several times in some cities.

South Africa’s electoral commission said it expects to complete 90% of the vote counting by the end of Tuesday.  Additional Reporting by Staff Reporter. Bloomberg/DM

For the latest 2021 elections results across provinces, click here.