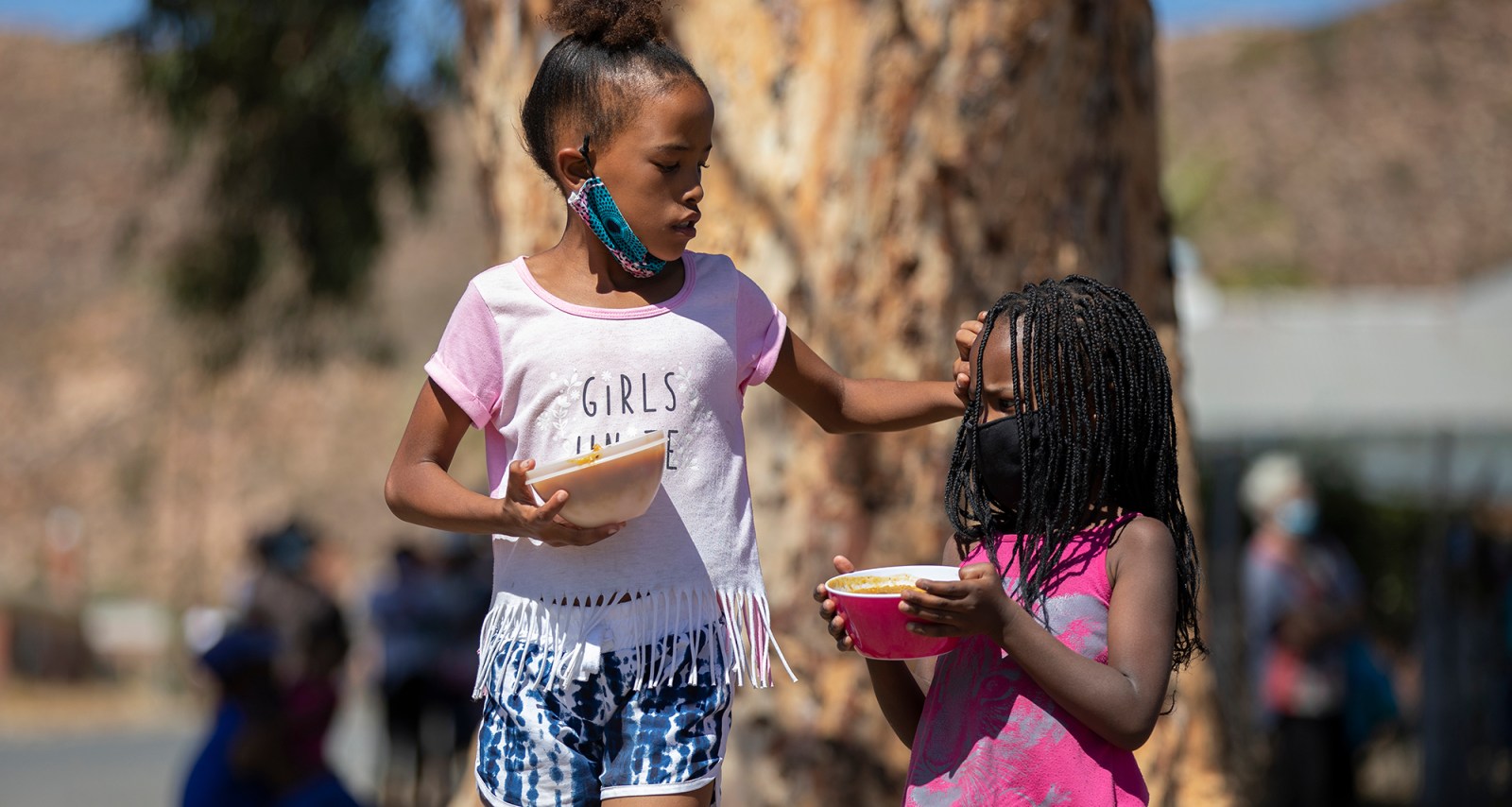 A girl helps her friend after receiving food from the Compassionate Hearts soup kitchen in Touws River on 9 February 2021. Touws River, an old railway town known as the gateway to the Karoo, is on the R62 wine route in the Western Cape. (Photo: EPA-EFE/Nic Bothma)

We rate the manifestos of five political parties on how they have prioritised food security.

South Africa faces an ongoing challenge of hunger as a result of vast disparities that compromise nutrition.

At least 11.8 million people in South Africa are hungry, and among those 2.5 million experience hunger every day.

With the Covid-19 pandemic, inflation, food prices increases, unemployment, a lack of understanding of factors that cause hunger and a lack of a comprehensive body to manage the entire food system and regulate the food environment, South Africa can expect the number of hungry people to double. This will be catastrophic for those who are already vulnerable.

Professor Dirk Kotzé, a political analyst in the Faculty of Political Science at the University of South Africa, told Daily Maverick agriculture should be at the centre of the local government elections as a means to reliable access to food. “It is most important at a local level in South Africa that the agriculture sector is supported by providing the necessary infrastructure and services.”

Kotzé says this will in turn determine how well the food network can function, not just in metropolitan but in national and provincial governments as well.

Awande Buthelezi, a researcher and organiser at the Co-operative and Policy Alternative Centre and an activist with the Climate Justice Charter Movement, told Daily Maverick: “Despite the Covid-19 pandemic, hunger is an ongoing crisis that has exacerbated all the other issues. Political parties have instead opted to sell old wine in new skins by carrying out the same tired promises of better service delivery and governance than rival parties. This is an indication of the degree to which electoral politics in South Africa is, sadly, far removed from the reality of the conditions that many in our country are living through.” 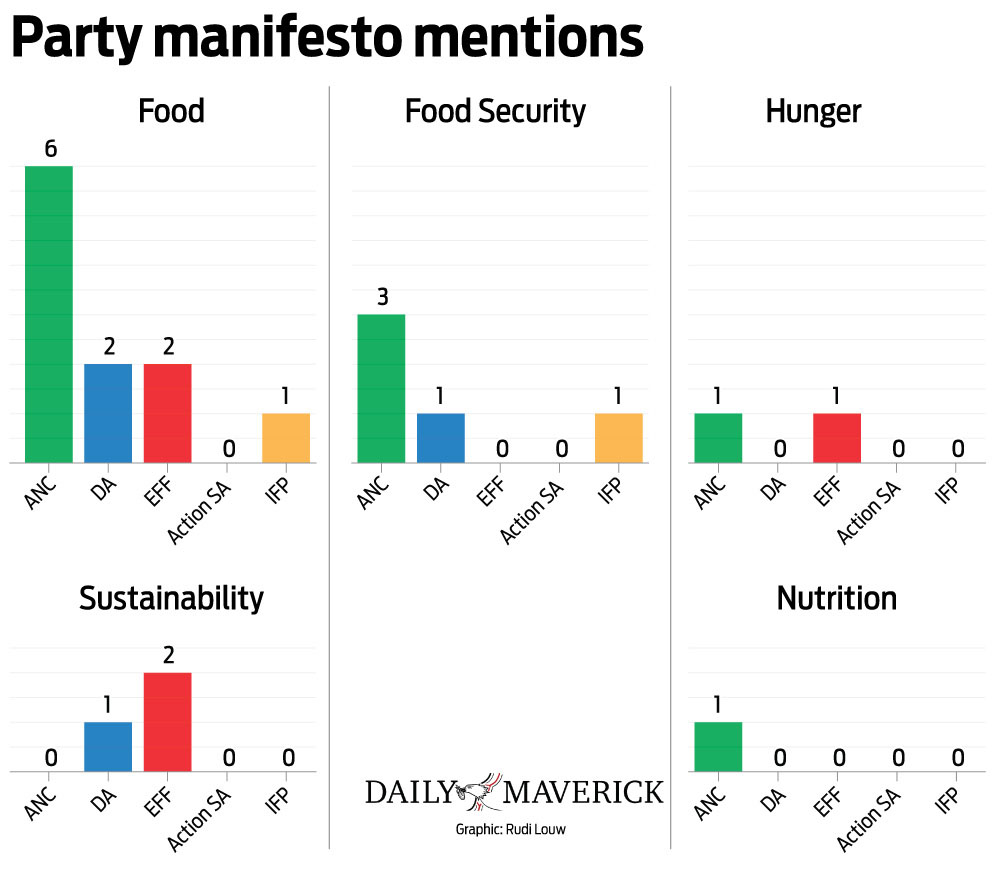 The ruling party has made an effort to mention food in its manifesto – food security appears three times on two pages.

The DA mentions food security once in its manifesto. Even then its plans to remedy food insecurity are vague, although in an email to Daily Maverick, Gwen Ngwenya, the party’s head of policy, says: “Food security is a priority for the DA and is not independent of the issues raised in the manifesto. Local government infrastructure plays a critical role in ensuring food security, especially in rural towns and villages. Without basics such as clean running water, reliable electricity supply and well-maintained roads, food production and transport will come to a complete standstill. Effective local government is cardinal in ensuring food security in South Africa.”

Ngwenya says that in addition to “getting the basics right” they are adopting a holistic approach to keeping communities in good health by minimising food security risks that can lead to poor health in urban and rural areas.

The EFF prides itself on a mandate of creating job opportunities and land with its mantra, “Jobs and land Manje!” But it says very little about improving food security. The party mentions food twice in its manifesto saying: “We will ensure that each household is food secure and participates actively in the local economy, building and supporting a fresh produce market for small-scale food producers, with a minimum of 50% access by women and the youth.”

Daily Maverick attempted to obtain an interview and comment from the EFF, but there was no response by the time of publishing.

The IFP works hard to integrate traditional leadership into the system of governance by recognising traditional communities as models of societal organisation.

In its manifesto the party acknowledges the need to create food-secure environments. Food security is mentioned once.

The IFP’s manifesto says: “We create food security by supporting subsistence farmers, developing cooperatives and assisting emerging farmers, in particular women- and youth-led projects. We will prioritise the rights and needs of farmworkers and support the sustainable use of land.”

Party spokesperson Mkhuleko Hlengwa adds: “The IFP knows that every night millions of South Africans go to bed hungry. The ruling party has failed to prioritise food security, instead making our people dependent on social grants that are far from sufficient to provide proper nutrition. Where the IFP governs we support subsistence farmers by providing materials and equipment to promote local economic development. We support and promote the sustainable use of land, and ensure the necessary access to land. The IFP commits to keep ploughing into agriculture and land development wherever we govern.”

ActionSA does not have a section in its manifesto dedicated to food security. In fact it doesn’t mention the word food at all.

Daily Maverick followed up with ActionSA to ask how it stacked up on the food crisis and improving food security. The party’s Lerato Ngobeni says: “Food security is a priority. In this cycle, we are dealing with local government and service delivery issues. We are a political party that’s one year old and at the moment prioritising local government-related issues. Having said that, food security belongs equally in our stance on climate change: though important, not necessarily in the local government domain.”

From a national food security perspective, local governments do not have a clearly defined policy mandate to address the issue. This limits what they can do.

Although some municipalities take up or contribute to food security through initiatives considered special projects or community-based empowerment, rather than a systematic attempt by local governments to integrate themselves into the broader frameworks governing food security.

The depth of human poverty and hunger is dire, as reported by Daily Maverick here. A failure to push the agenda of food security to be mandated at local government level is a failure to realise the right to food and human security. DM