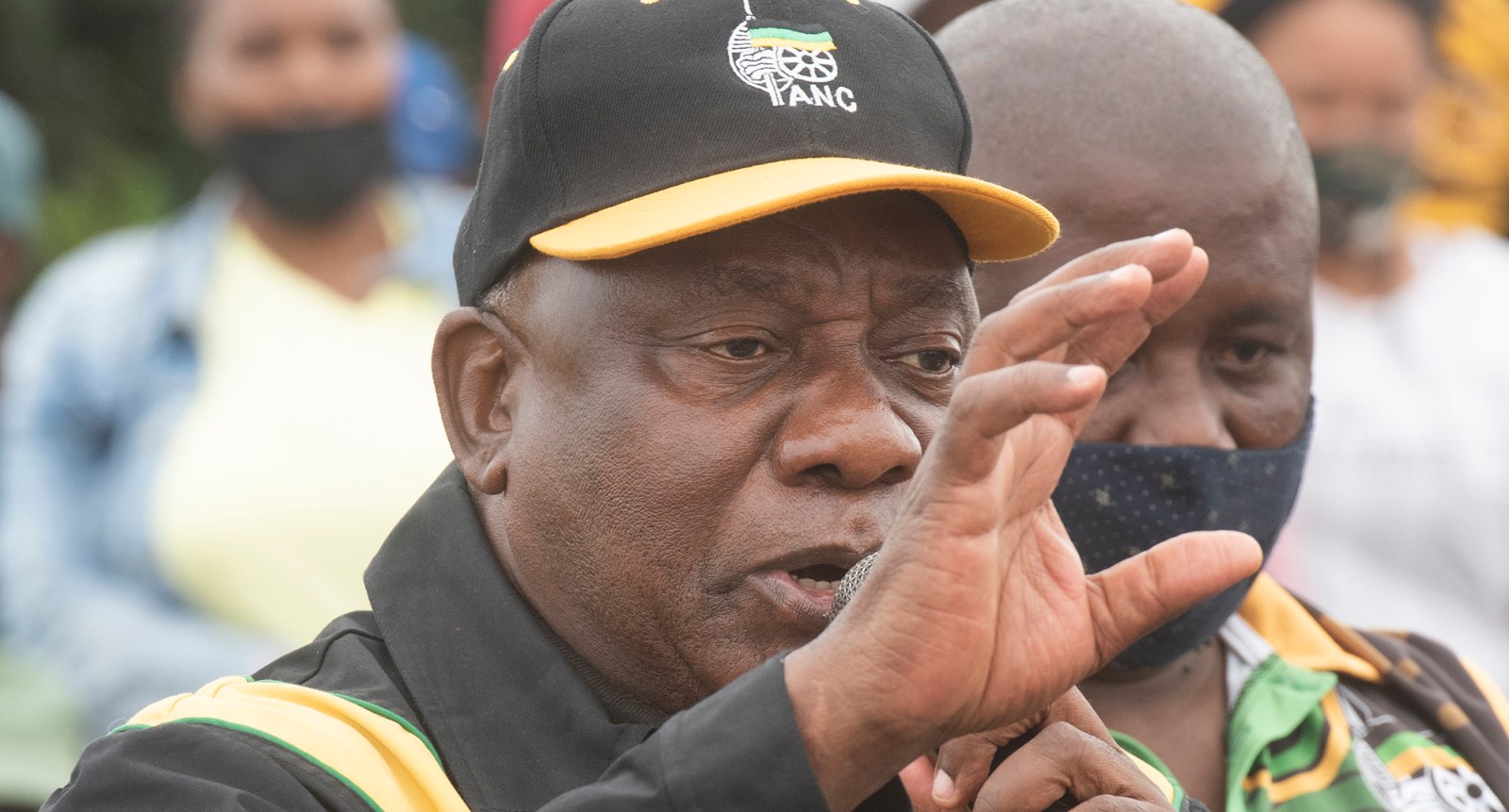 Overflowing sewage and a lack of job opportunities were some of the biggest issues raised by communities in Cape Town during an electioneering visit by ANC President Cyril Ramaphosa.

On Thursday at a field in Mfuleni, Cape Town, Princess Matiso was waiting for ANC President Cyril Ramaphosa, who was on the campaign trail in the city.

Standing with a group of friends, Matiso said, “We have come to see the president.” The president visited several areas in the city, which has not been governed by the party since 2006.

Matiso lives in Ward 114, in Mfuleni. Her friend Khanyiso Sinose told Daily Maverick some of the biggest problems in their ward included electrical outages caused by illegal connections, potholes and “we don’t have jobs”. Describing her ward, Matiso said, “It’s a mess here.”

Matiso pointed out other issues within the ward and the greater Mfuleni area: no services such as Home Affairs or offices of the South African Social Security Agency and no fixed police station. If residents need police services, they have to go to the Blue Downs Police Station, which costs about R30 in a taxi.

During the 2016 municipal elections the ANC won 78% of the votes in the ward. This year’s ANC candidate, Mongezi Madikane, told Daily Maverick if he is elected as councillor he will focus on getting a fixed police station for the area. He said despite promises made by Police Minister Bheki Cele and former police minister Fikile Mbalula, the area did not have a permanent station.

Other problems in the ward include large potholes, the taxi rank needs to be redeveloped and sewerage drains are overflowing. Another big challenge was land – the land invasions by people from other areas prevented housing development for Mfuleni residents who are on waiting lists. “We can’t make use of the land for our own people,” said Madikane.

At a community meeting, Ramaphosa told the crowd to vote for Madikane.

“What I’d love is that you guys vote for him because you chose him as a councillor to ensure we win this ward… come out in your numbers to vote,” said Ramaphosa.

He said the problems the community were complaining about could be fixed by the ANC.

“You should leave the DA behind because they’ll leave you in your current state, with the sewage running through the streets. They don’t build you houses. All the things you’re complaining about, the DA just wants your vote, but they won’t improve your conditions, you know that, right?”

Ramaphosa told the crowd that councillors such as Madikane were told to not get into office to hire friends and families. “We want ethical councillors. We’ll remove them if they’re corrupt because the ANC has embarked on a journey of renewal.”

Ramaphosa said the ANC had a new game, one of renewal and rebuilding – “a game of repositioning the ANC and a game of making sure the ANC recommits itself to serving the people”.

At a field in Ward 99, Khayelitsha, residents waited for the president to arrive. Jackie Solizwe, who has lived in Khayelitsha for just over two decades, said the biggest problems in the area were crime, gangsterism, poor service delivery and joblessness. “The faeces is running in the street,” he said.

Earlier this week Daily Maverick reported on Ward 18 in Khayelitsha, where residents also pointed out sewage in the streets as one of the area’s biggest problems.

Read in Daily Maverick: Ground Level Report: Where the stench of sewage could lead to victory for a Khayelitsha independent candidate

Solizwe told Daily Maverick he was there to see the president because “the ANC bought us this democracy we have today”. He wanted scrapyards to be investigated, as boys were “taking TVs out of houses” and selling them at dealers.

After the elections, Solizwe hoped, “things will be better than the state we are in”.

When Ramaphosa arrived he introduced several candidates for the area. He told the crowd that issues in the area would be attended to if residents voted for the ANC.

“We’re going to ensure the local government is going to be well run. You want a well-run municipality, not one where funds return, like the one in Cape Town, under the DA, because they’re not doing anything for you. You want houses… there are no houses. You want to live in a community with water, that hasn’t happened,” he said.

“You want a place where sewage isn’t all over the streets; even electricity you don’t get, hence, we as the ANC want you to come in your numbers to vote, because if you don’t this municipality will remain in place.”

During the community meeting the education lobby group Equal Education protested, holding up placards about unemployment, schooling and Covid-19. According to TimesLIVE, Ramaphosa allegedly asked people to put the posters aside and said: “Are these people even sober? They look a lot drunk?”

On his last stop of the day the president visited Rylands. The area has been controlled by the DA since 2011. Former ANC MP Connie September led the events.

“Our mantra is that this ward must come to the ANC,” said September. She said the ward had deteriorated, that there was “sewage in the street” and “the parks were the only thing that was delivered in five years”.

Ward 46 covers Belgravia, Rylands, Gatesville, Hatton Estate, Surrey Estate, Greenhaven and Manenberg. September said the ward was the home of people like anti-apartheid activists Dullar Omar, Anton Fransch, Coline Williams, Robbie Waterwitch and Ashley Kriel. September said if the ANC would win the ward, “we will do it for all of them”.

The ANC provincial head of elections, Cameron Dugmore, said there was a “new energy” in the ANC over the last few weeks. “The last 10 days are about knocking down doors.”

Ramaphosa again gave a message of the ANC’s renewal. He said it was an exciting time, as not only would the party gain many votes, “it’s also a moment of consolidating our own renewal process.

“We will not be able to get our people to vote for us if we have dirty hands.”

EFF leader Julius Malema was campaigning in Kayamandi in Stellenbosch at the same time. He will continue to campaign in the city until Saturday. DM