Ground Level Report: Where the stench of sewage could lead to victory for a Khayelitsha independent candidate 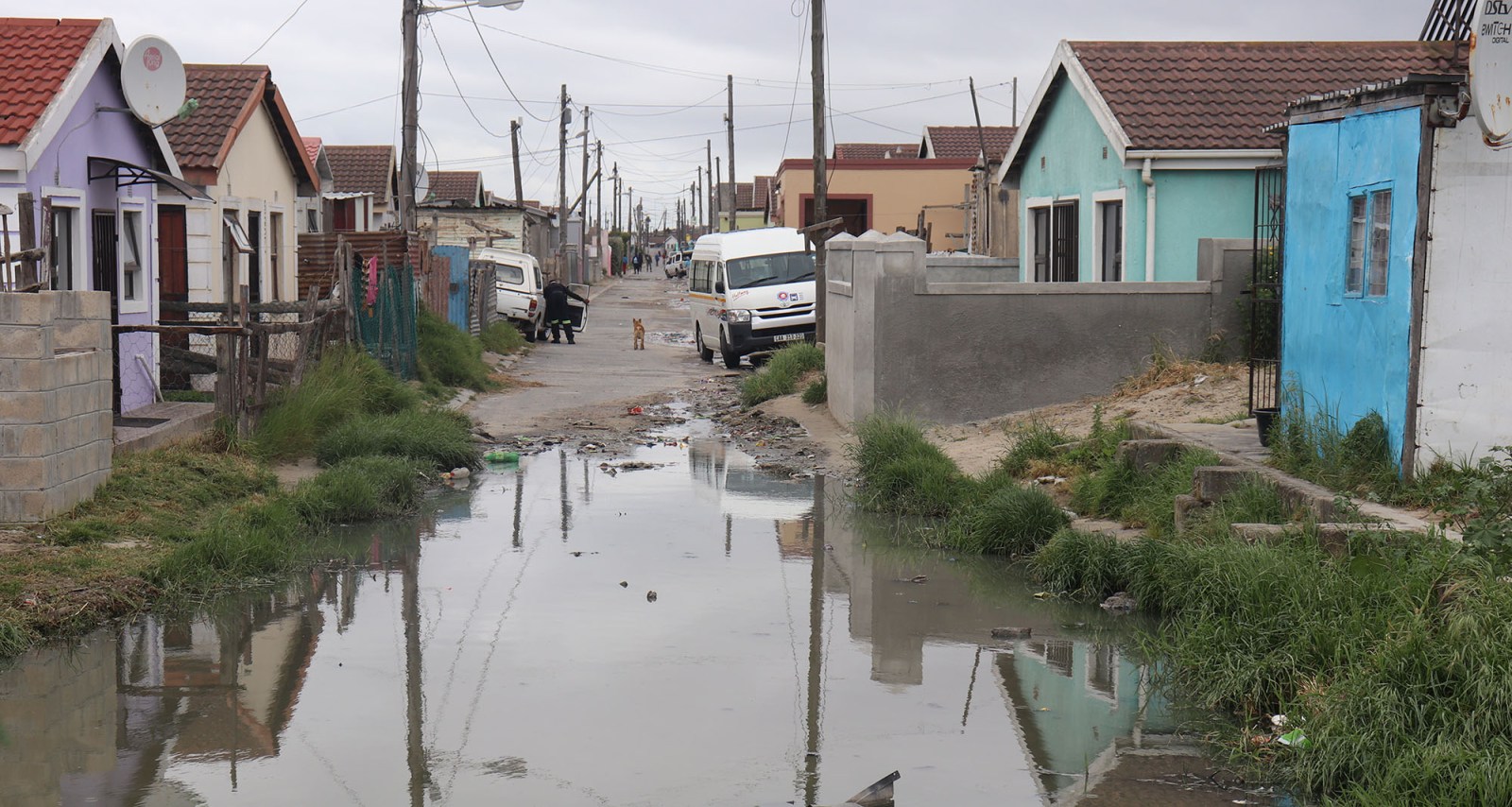 For some Khayelitsha residents in Ward 18, the upcoming local elections represent a chance to elect an independent candidate whom they can hold accountable instead of being let down by party loyalty and deployment.

Besides the stench of sewage, Ward 18 in Khayelitsha is riddled with potholes, the community’s most easily accessible clinic has been closed and there are far too few job opportunities.

“The smell of the sewage isn’t that bad,” said Luvuyo Maqula, who lives in Ward 18.

Ward 18 covers Site C in Khayelitsha, the largest township in the Western Cape. It often grabs headlines for service delivery protests, land occupations and high levels of crime and has a mix of formal and informal housing.

Nokuthula Mkuyana, who lives in a formal house in Ward 18, said refuse collection was a problem. “We have water and electricity, but the streets are just filled with sewage. If it’s not the sewage, it’s the potholes in the streets.”

A month ago, residents from Khayelitsha protested over blocked drains and sewage running down their streets and into their homes. According to GroundUp, this was the third protest over the same issue this year.

Maqula says it’s “not that the [sewage] smell is better, we’re just so used to it that it doesn’t bother us as much as it initially did”. 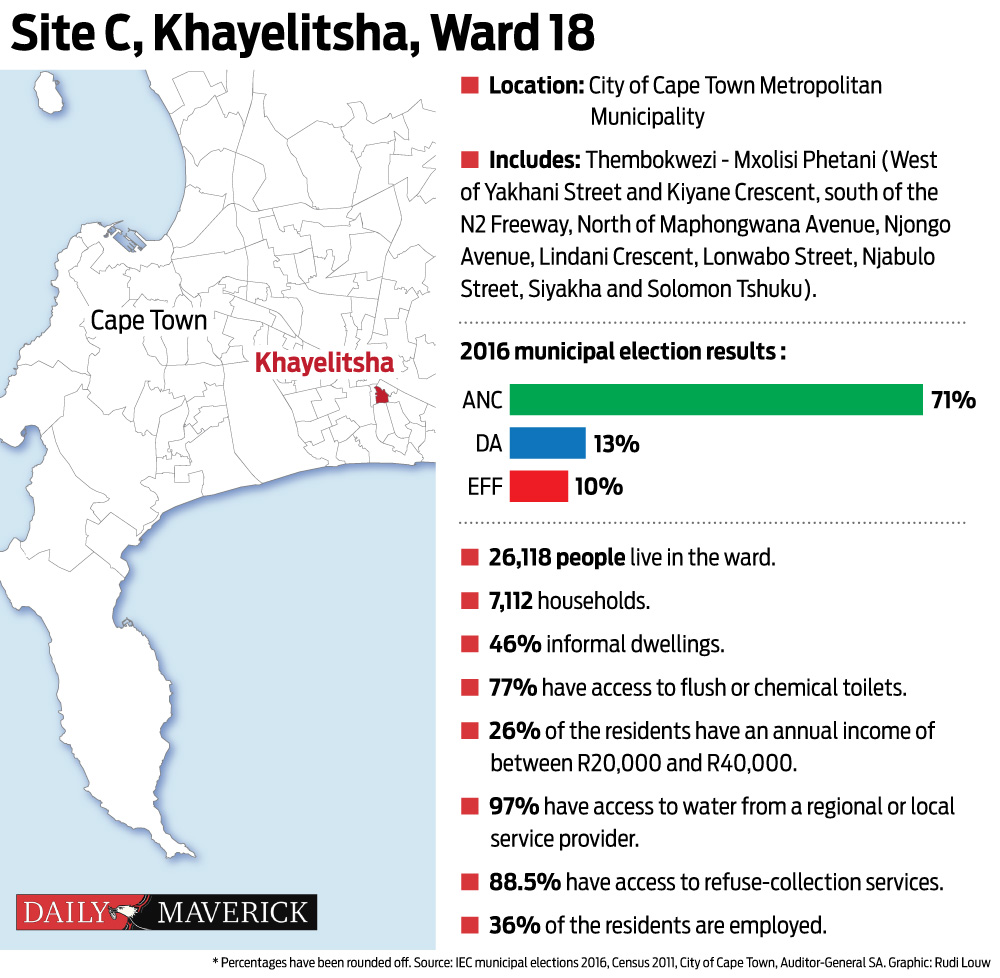 However, Mkuyana said: “In summer, it’s terrible because there are flies everywhere and we need to close our windows, otherwise the smell which comes inside our homes is unbearable. We also need to warn the children not to play around there. It’s bad.”

“Even a simple thing such as knowing you’ll take your child to the nearby clinic doesn’t exist for us any more, because we have to travel even further for healthcare,” said resident Babalwa Maqokolo.

In the space where the clinic used to be is a community hall and a small white container stall where fruit and vegetables were sold. “That person had to close their business because of the sewage that runs in front of the container,” said Bathandwa Gali, a community leader

When residents are asked how the current councillor, Ntomboxolo Kopman, responded to their grievances, they say “she doesn’t care”.

Kopman, an ANC councillor, is running again in Ward 18. But the handful of residents that Daily Maverick spoke to said they do not want her back in office.

“This ward councillor that we’ve had for the past five years has been useless, so it doesn’t make sense to vote for her again, so she can do what?” said Gali.

When Daily Maverick contacted Kopman to ask about residents’ grievances and the closure of the clinic, Kopman asked for the queries to be sent via text message. These and further calls were not responded to.

When the ANC came to campaign in the area, urging residents to vote for Kopman, many residents told the campaigners they wouldn’t be voting for Kopman, said resident Thobeka Nokhwe.

“Then they said, ‘You’re not voting for Kopman, you’re voting for the ANC.’  How does that work? We can’t do that, it’s not about the ANC, it’s about the kind of leaders we want — and we don’t want her,” said Gali.

“We know that the ANC took us out of apartheid, but when someone isn’t doing a good job, you need to let go of them. Even when you watch football, if your team keeps losing, then change the team,” said Gali.

Gali and other residents have often had to volunteer to fix potholes or pay someone to, but the community can only do so much.

Disappointment with service delivery has led to them saying that come 1 November, they will be voting out Kopman and voting in Nolubabalo Mtshalala, an independent candidate.

Mtshalala is a community leader who works with domestic abuse survivors. In 2016, she was among the 15 women honoured by the City of Cape Town’s Social Development and Early Childhood Development Department for their work.

“The ANC has failed us dismally; that’s why the community, which has seen me demand better service delivery, wanted me to stand as an independent candidate,” said Mtshalala.

Mtshalala is one of 1,718 independent candidates contesting the upcoming elections.

On why some residents were pinning their hopes on Mtshalala, Maqokolo said: “She’s close to us and she knows our issues. Our current councillor has never come to us and asked us what we need; with [Mtshalala] she already knows the issues we are faced with.”

Mtshalala has lived in Ward 18 for 30 years. “It’s bad living here. There’s lots of crime, there aren’t any jobs for our kids and there’s barely any service delivery,” said Mtshalala.

She has vowed to prioritise the community’s grievances, which are mainly about the sewage, the lack of a clinic and ensuring that young people get access to job opportunities.

Other candidates contesting the ward are Nondumiso Mvinjelwa from the DA and Mbulelo Dwane from the EFF.

On whether Mtshalala’s run will make a dent in the votes for the ANC in the ward, elections analyst Wayne Sussman said: “Every time there are elections, you’ll hear of people leaving the ANC for the DA or going independent, and that rarely affects the parties.

“But if someone who is in good standing in the community goes independent, then that could have an impact on how the community votes.”  DM