Randjesfontein farm: A reminder of government’s inconsistency on evictions 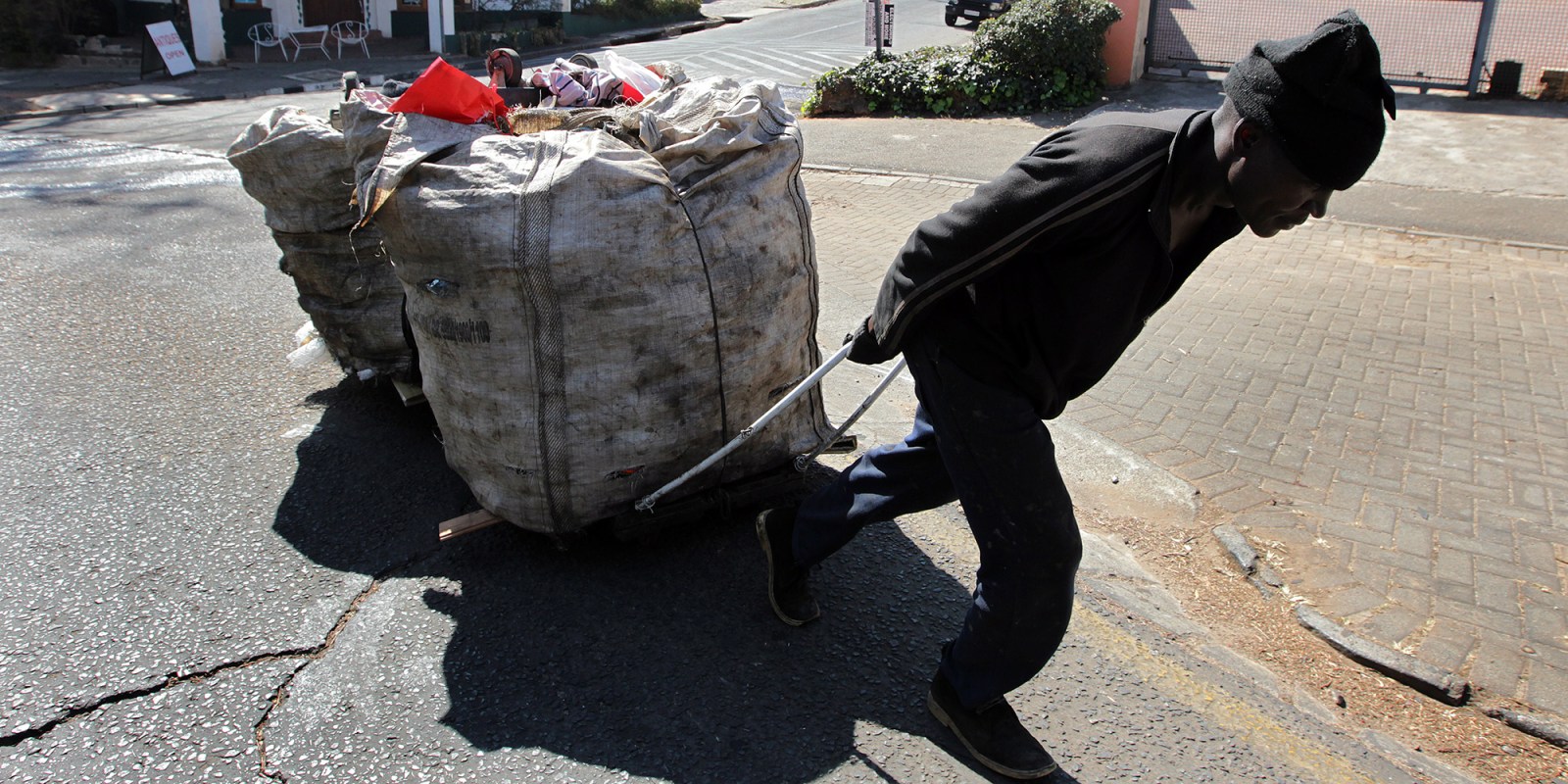 A man working as an informal recycler in Johannesburg pulls a cart loaded with recyclable materials. (Photo: EPA / Jon Hrusa)

The right to work is protected under Articles 6-8 of the International Covenant on Economic, Social and Cultural Rights, which requires South Africa to recognise the right to work, including the chance to gain a living out of work people have ‘freely chosen’ or ‘accepted’. States carry an obligation to take steps and ensure that this right is respected, protected and fulfilled.

Waste reclamation involves the collection, sorting and selling of recyclable waste. In South Africa, waste reclamation is run on a largely informal basis, and, with official unemployment rates as high as 34.4%, the sector provides a crucial source of income for at least 90,000 people who may not be able to find other forms of work. In addition to the economic benefits to reclaimers themselves and the environmental benefits, it is estimated that reclaimers also save struggling local governments up to R750-million a year in landfill space.

Over the years, more than 100 informal reclaimers have taken settlement on the Randjesfontein farm property, found in Midrand, Johannesburg.

In 2020, Ryckloff-Beleggings, the owner of the property, approached the High Court for an order to evict the reclaimers, many of whom had lived on and worked from the property for years. According to South African law, where an eviction threatens to render occupiers homeless, an order of eviction cannot be granted by a court unless temporary alternative accommodation has been provided by the government. Represented by the Socio-Economic Rights Institute of South Africa, the reclaimers argued that temporary accommodation provided to them should allow them to continue plying their trade.

The International Commission of Jurists (ICJ) has intervened in the court proceedings as an amicus curiae, aiming to assist the court by presenting arguments on the relationship between the right to housing and the right to work, in international human rights law.

In our written submissions, and in oral arguments before the court on several occasions, the ICJ has argued that, at a minimum, the government is required to consider whether it can provide temporary accommodation to the reclaimers, which would allow them to continue their productive, income-generating work activities.

The right to work is protected under Articles 6-8 of the International Covenant on Economic, Social and Cultural Rights, which requires South Africa to recognise the right to work, including the chance to gain a living out of work they have “freely chosen” or “accepted”. States carry an obligation to take steps and ensure that the right is respected, protected and fulfilled. The right to work, as the ICJ has strongly argued citing international standards, applies to everyone, citizen or non-citizen, rich or poor, doing formal or informal work.

As with other economic, social and cultural rights protected in international law, South Africa has an obligation to ensure “non-retrogression” in the realisation of these rights. What this means: the government should not, without full and detailed justification in exceptional circumstances, take measures that decrease existing access to work or housing.

An eviction of reclaimers in the circumstances of this case would be “retrogressive” on two levels: the reclaimers would lose their existing housing and their means of making a living. While there could hypothetically be justification for these harms to the reclaimers’ rights, unfortunately, the government’s response shows contempt for the reclaimers and a general disregard for international human rights law and standards.

In March 2021, the court heard arguments from the parties and ordered the government to go away and consider the options for locations that the reclaimers could be relocated to, taking into consideration their ability to work at the new locations. The government was required to report to the court on its findings. In anticipation of a return to court, the government filed a paltry report with insufficient detail that failed to address the possibility of accommodation allowing the reclaimers to work at all.

Seemingly in direct defiance of this order, when the matter returned for a hearing in September 2021, the government’s lawyers explicitly told the court that they had not reported on work opportunities at possible relocation sites because they did not want to set a “bad precedent”. They said that they were not obliged to do so, spuriously characterising the work done by reclaimers as criminal activity.

Seemingly bewildered by the government’s defiance, on 23 September Judge Windell reminded the government that the reclaimers were “unique occupiers” and that the Constitution requires the consideration of “all relevant circumstances” by the judge before granting an eviction order. Referring to the arguments ICJ raised about the right to work explicitly, Judge Windell once again instructed the government to file an adequate report, considering possible relocation sites that may provide an opportunity for the reclaimers to continue their work.

Though no written judgment is available as yet, Judge Windell’s orders to the government in March and September 2021 are particularly important for a number of reasons.

First, they affirm decisions of the Supreme Court of Appeal and the Constitutional Court, asserting the inextricable link between the right to dignity and the right to work.

The SCA held that the right to work protects “the fulfilment of what it is to be human” because work is “most often bound up with being accepted as socially useful”, while the Constitutional Court has emphasised that “the ability of people to earn money and support themselves and their families is an important component of the right to human dignity”.

Second, Judge Windell has repeatedly and consistently acknowledged the importance of South Africa’s adherence to international human rights standards in terms of the right to work.

As there is no explicit right to work in the South African Constitution, this is necessary and, importantly, provides courts with a body of detailed jurisprudence to draw on in matters pertaining to work and employment. The ICJ has therefore repeatedly called on South African Courts to embrace interpretations of domestic law consistent with the right to work, a position that has been encouraged by the UN Committee on Economic, Social and Cultural Rights in its concluding observations on the initial report of South Africa.

Third, the court orders communicate to local government officials the fact that all human rights are interdependent, interrelated and interconnected. Government departments responsible for housing and human settlements cannot simply shrug and turn their backs on economic development and employment-related concerns when their actions undoubtedly impact on a range of human activities and rights.

This case also provides a stark reminder to the government of the general inconsistency of its approach to evictions and the right to housing, with the Constitution and the rule of law. While the government often claims to be undertaking evictions to prevent lawlessness, it is in fact perpetrating lawlessness itself by refusing to comply with its human rights obligations when considering and undertaking evictions.  Particularly in the context of the Covid-19 pandemic, courts have described this as “inhumane” and “heartless”.

Crucially, above and beyond the basic cruelty of evicting poor people during the pandemic and stripping them of their only income-earning activities while doing so, the trend of defying court orders and ignoring human rights presents a significant threat to the rule of law itself. As the high court has previously warned:

“A democratic state based on the rule of law cannot exist or function, if the government ignores its constitutional obligations and fails to abide by court orders. A court is the guardian of justice, the cornerstone of a democratic system based on the rule of law. If the State, an organ of State or State official does not abide by court orders, the democratic edifice will crumble stone by­ stone until it collapses and chaos ensues.”

Local governments across the country, like all other State entities, must take reasonable and effective measures to respect, protect, promote and fulfil the rights in the Bill of Rights. To do so they are duty-bound not only to consider but also to give effect to human rights within the bounds of the rule of law. Where the rule of law crumbles, stone by stone, the impact includes the risk to individuals in the position of the informal reclaimers on Randjesfontein farm being left homeless and without work. DM/MC