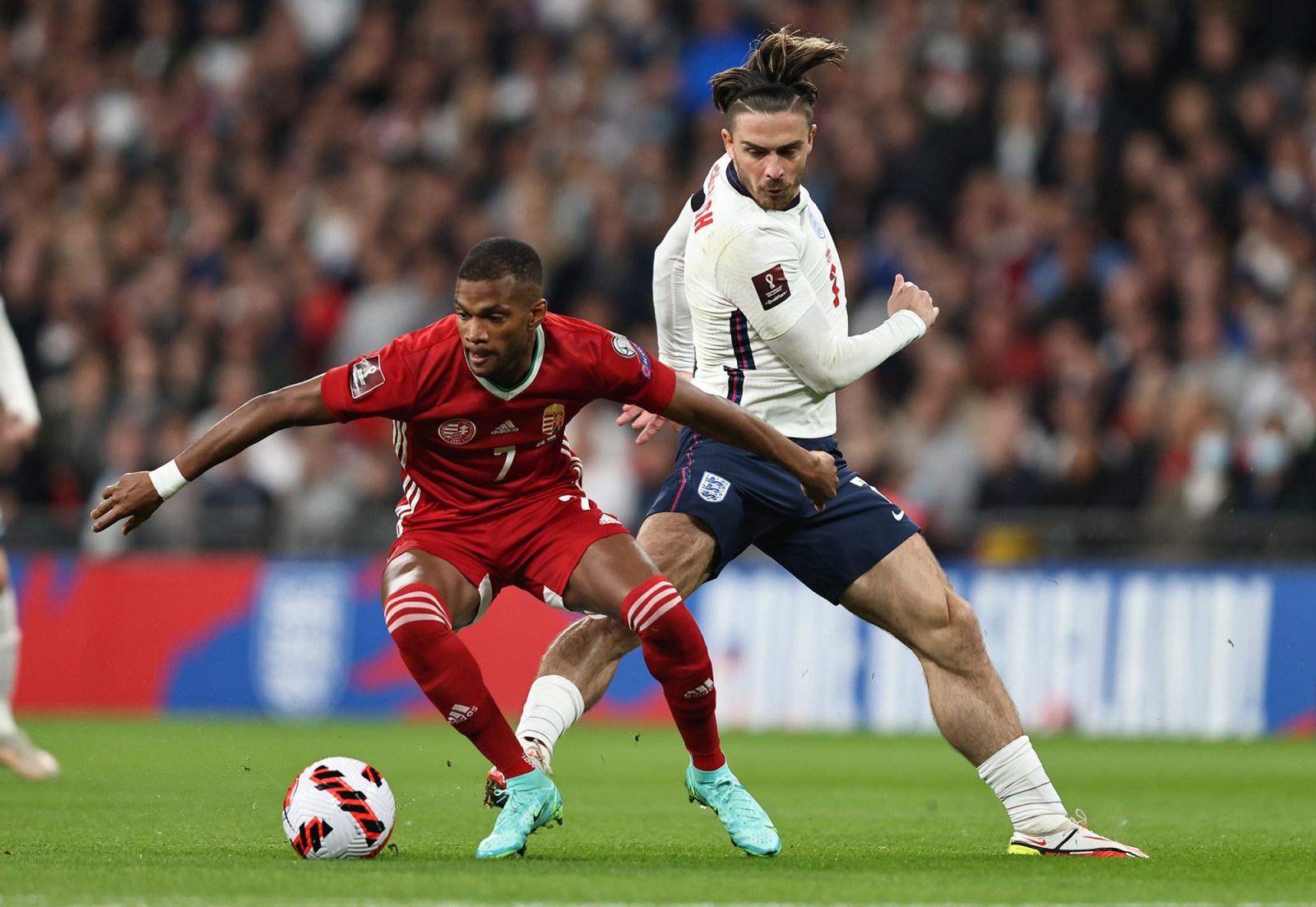 Loic Nego of Hungary in action with Jack Grealish of England during the 2022 Fifa World Cup Qualifier match at Wembley Stadium in London on 12 October 2021. (Photo: Marc Atkins / Getty Images)

The latest instalment of the international break is over, with some teams booking their tickets to Qatar 2022 and others inching ever so close.

The latest round of the Fifa World Cup qualifiers has concluded. With just under a year left until the global spectacle kicks off, two nations, Germany and Denmark, became the first to join hosts Qatar in qualifying.

Other fixtures in the European segment of qualifying saw unsavoury scenes from Hungarian and Albanian ultras.

In African qualifying, Senegal and Morocco became the first nations to move to the third and final stage of the qualification process for the continent. With two matches remaining in the group phase, the two have taken unassailable leads in their respective groups.

Roland Sallai’s 24th-minute penalty gave Hungary the lead, only for England to reply 13 minutes later when John Stones equalised from an exquisite Phil Foden cross. It remained that way for 90 minutes, with the Three Lions preserving a three-point lead over Poland at the summit of Group I.

Despite walking away with just a point, the Hungarians should’ve been celebrating holding the English on home soil, as well as scoring their first goal in five competitive matches against the 1966 World Cup winners.

Instead, hooliganism from their travelling supporters marred the occasion as they clashed with English law enforcement authorities at London’s Wembley Stadium.

The English police said they had moved into the section of the stadium where the Hungarians were to identify and remove a culprit who had allegedly racially abused a steward. They were met with resistance and subsequently had to retreat.

In another Group I encounter, between Poland and Albania, play had to be suspended temporarily after bottles were thrown at Poland forward Karol Swiderski and his teammates after he had netted for his country in the 77th minute. Poland left the field following the distasteful incident, with play resuming after a 20-minute break.

In the remaining 13 minutes, the visitors held on to earn a precious three points and solidify second spot behind England.

Football’s world governing body, Fifa, has criticised the scenes, vowing to investigate them and mete out appropriate punishment for the culprits.

“Fifa strongly condemns the incidents at the England vs Hungary and Albania vs Poland matches and would like to state that its position remains firm and resolute in rejecting any form of violence as well as any form of discrimination or abuse,” read a statement from football’s mother body. “Fifa has a very clear zero-tolerance stance against such abhorrent behaviour in football.”

Elsewhere in Europe, Denmark booked their ticket to Qatar as they maintained their perfect record in Group F. On top of winning all eight of their games to date, they are yet to concede a goal in their qualification campaign.

The Danes were dominant against a depleted Austria, but it took a piece of magic from Thomas Delaney to break the deadlock, the midfielder dancing through Austria’s back line before teeing up Joakim Maehle to convert the clinching goal.

Timo Werner’s double helped Germany secure their place in Qatar after thumping North Macedonia 4-0 to avenge a surprising defeat at the hands of the same opponents back in April.

The Germans were well on top throughout, but the closest they came in the first half was when Werner hit the post. After the break, they broke through thanks to Kai Havertz before Werner’s two well-taken goals and a first international strike for Jamal Musiala saw them cruise to victory.

Portugal legend Cristiano Ronaldo bagged his 10th international hat-trick to increase his world-record international goals tally to 115 in 182 appearances, as his home nation dismantled Luxembourg to guarantee a top-two berth in Group A. He has now scored more goals against Luxembourg (eight) than any other international player.

In African qualifying, Bafana Bafana did the double over Ethiopia, securing six crucial points to remain at the summit of Group G with 10 points — one point ahead of Ghana.

Meanwhile, Morocco guaranteed their place in the final round of qualifying, winning all their four games to clinch Group I and leave the remaining two match days as a dead rubber.

The North Africans thumped Guinea-Bissau 7-1 on aggregate over the two legs that the two nations squared off in. That single goal was the first they have conceded in four games in the qualification campaign.

Senegal also put seven past opponents in Group H, beating Namibia 4-1 at home and 3-1 away to take an unassailable lead. They are now waiting to see who they will face in the knockout round of qualification. They too have two games remaining, but the results in those will have no impact on them. DM