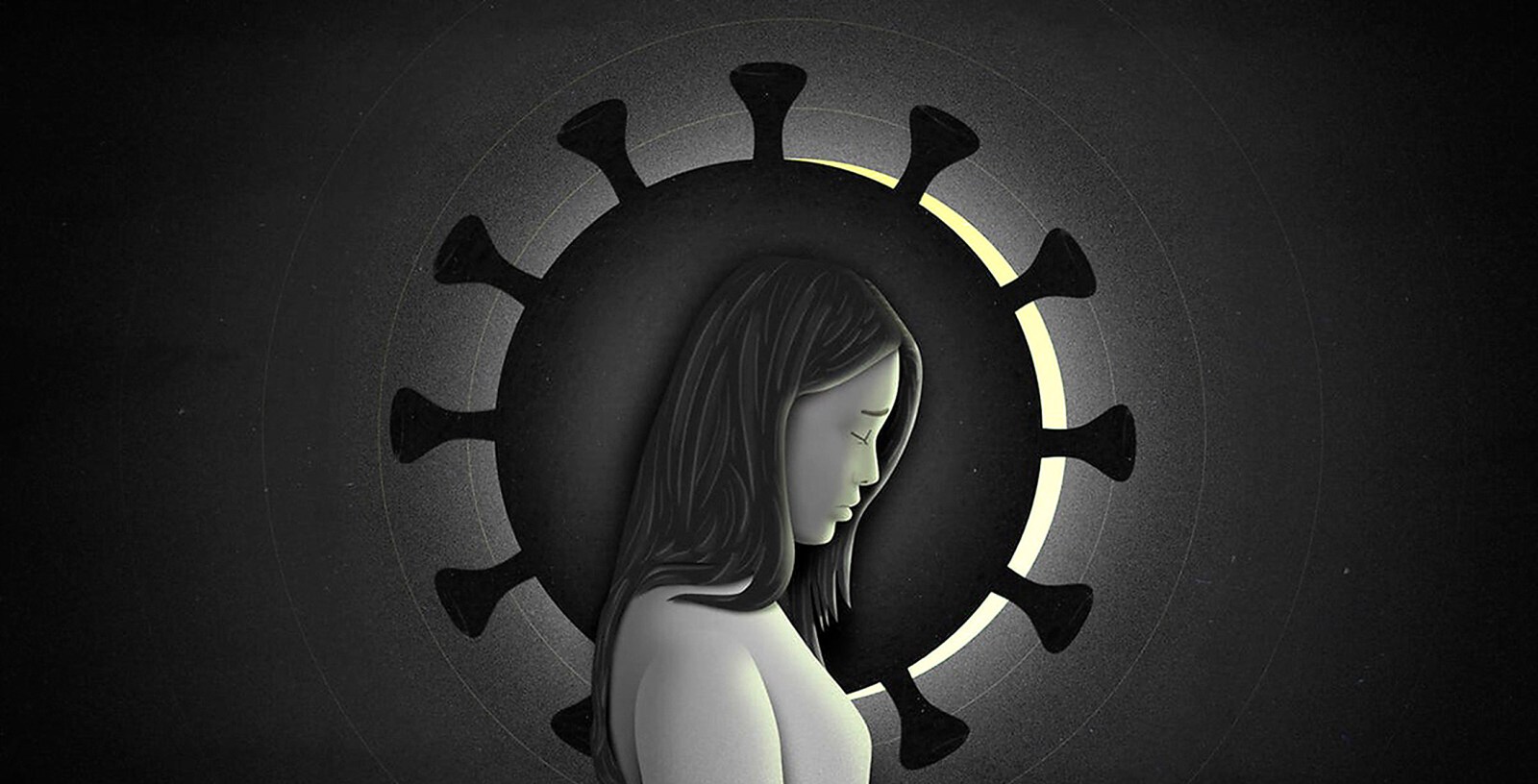 This is a scream for help that, tragically, will fall on deaf ears. People will harm themselves, harm others and some will die because the government will ignore what I am about to write.

South Africa is now facing a mental health emergency that is the culmination of the simultaneous crises that are imploding the hopes, dreams and dignity of many who live in the country: the Covid crisis, the unemployment crisis, the inequality crisis, the femicide crisis, the poverty crisis.

After someone dies by suicide friends often dissect the warning signs that they missed. A kind of post mortem of the soul takes place. At an aggregate societal level all the warning signs have been there, too, but we keep ignoring them. Our society is irrupting, but the powers that be can ignore it because the damage is (at this stage) mostly internal.

The research reports of the National Income Dynamics – Coronavirus Rapid Mobile Survey (NIDS-CRAM), for example, have documented increasing anxiety and deteriorating mental health as a result of Covid and the measures we have instituted to control it (see the Wave 5 report, The Covid-19 Pandemic, Hunger and Depressed Mood Among South Africans in particular).

The South African Depression and Anxiety Group (Sadag), a non-profit organisation that provides mental health services and offers free counselling lines and support, tells a similar story. It doesn’t get one cent from the Health Department. Yet it valiantly tries to plug the gaping hole in an area of everyone’s right of access to healthcare services that, for public health users, is almost non-existent in South Africa.

This week, to mark World Mental Health Day and month, Sadag released a set of shocking statistics that they have gathered from their own experience.

Pause for a few minutes and consider this:

These raw numbers tell of a populace that is traumatised and in pain. Most worryingly Sadag’s numbers tell of a society that is feeling trapped, doesn’t see a way out, and which leaves many people contemplating suicide.

The fact that you don’t see it, doesn’t mean it isn’t there.

Sadag’s findings coincide with a report released last week by the UN Children’s Fund, Unicef. A U-Report poll they conducted, with 5,500 responses, found that 65% of young people who responded stated that they had some form of a mental health issue but did not seek help.

More than a quarter didn’t think their mental health problem was serious enough to seek support, while 20% did not know where to get help and 18% were afraid of what people would think.

Tellingly Unicef says: “Increased poverty and a lack of hope for the future, were the top reasons given for children and young people’s anxiety, showing a shift from violence as the lead reason in a similar poll six months ago.”

How do we comprehend pain on this scale?

You can’t, unless you are living it, or have a close friend or family member who has succumbed to it.

The authors of the NIDS-CRAM report explain that: “Mental health is impacted by an array of factors. Many of these are internal to the  individual – for  instance, genetics, disposition and developmental  history.” But, they say, “a significant amount of the variation is explained by environmental factors”.

To prove their point, the researchers point out that the percentage of people who have experienced significant levels of depressive symptoms ever since the start of the pandemic is at an unprecedented and alarming 52%. The research shows “that it is not the same individuals who are experiencing depression across all time points, but rather different individuals, moving in and out of the depressed mood category.

“One possible conclusion to be drawn from this phenomenon – of a changing population of people experiencing low mood – is that while some of the risk for depressive symptomatology resides within the individual, the major drivers, perhaps particularly in the pandemic, are structural and based on changing circumstances.

“As the pandemic drags on, and people cycle in and out of employment, and between shifting states of hunger, people move in and out of a low mood state – what we would call ‘churning’. Among the environmental influences on mental health, is the ability to fulfil one’s basic needs, like having stable housing, employment and sufficient food. Hunger, in particular, is significantly associated with poor mental health, across a variety of settings.”

As we come out of the third wave of Covid-19 there are signs that for the privileged, the monied, the homed, life is returning to normal. There’s light and laughter in the pubs and restaurants. People are planning Christmas holidays. But there are millions of people for whom it is not. Truth be told, one of the major factors driving mental illness is a manufactured virus called inequality and poverty.

Yet, although, like Covid-19, the mental health crisis has huge economic and social costs, it’s not a communicable disease. Consequently the government has no strategy to manage it short of lip service and dumping it on organisations like Sadag.

Instead of increasing the per capita health budget it is cutting it. Mental health care is “not affordable”. As we have seen in media reports this week, about Durban and Coastal Mental Health, we have learnt nothing about care for the mentally ill from the Life Esidimeni crisis. Despite politicians’ crocodile tears they died for nothing.

This poses a huge danger to society. At the moment the anxiety seeps into substance use, domestic violence and quiet despair. But at some point, as we saw with the riots in July, it will snap. 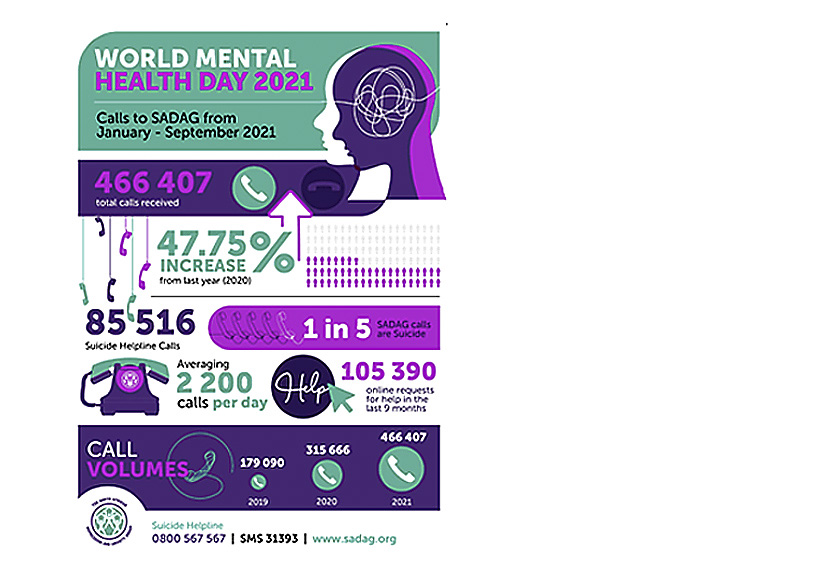 In a few weeks President Cyril Ramaphosa’s new finance minister will step up to deliver his maiden medium-term budget policy statement. He will tell us a lot about what we can’t afford, why austerity and fiscal consolidation is necessary. Among the unaffordable items will be things needed for mental health: food, a basic income grant, healthcare services – in other words, the Constitution.

The financial markets and business will applaud him. But, as he does so, he should be warned that there is a price to be paid. The harm is foreseeable. The government should act differently to prevent it. It’s unlikely it will. DM/MC

On Wednesday, 13 October at 10am, Sadag will host a panel discussion on Mental Health in an Unequal World. Expert speakers, Clinical Psychologist Professor Crick Lund, Psychiatrist Dr Kagisho Maaroganye as well as Traditional Healer Taz Sithole will share their opinions on the State of Mental Health in South Africa. Click here to register.