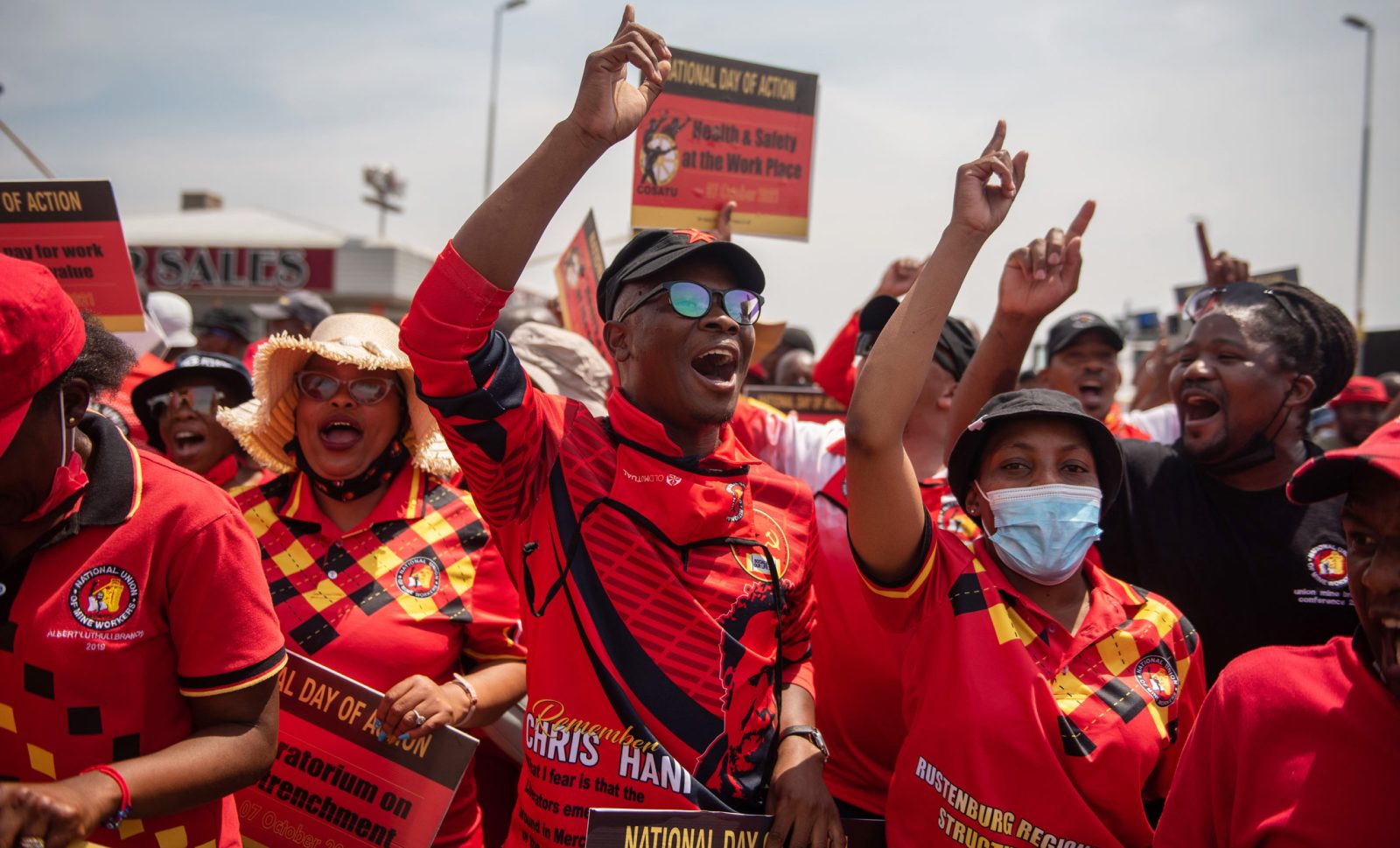 Workers affiliated to Cosatu during the Congress of South African Trade Unions National Day of Action on October 7, 2021 in Rustenburg, South Africa. The trade union, called on its members to participate in a nationwide strike against measures to freeze wages in the private and public sectors and also to draw attention to high levels of unemployment in the country. (Photo by Gallo Images/Alet Pretorius)

The union federation, Congress of South African Trade Unions (Cosatu) held a one-day stay-away, as well as smaller marches in parts of the country, calling for the government to fix the “economic mess” the nation is in.

The stay-away comes two days after workers affiliated with the National Union of Metalworkers of SA (Numsa) in the steel and engineering sectors went on strike over a long-standing dispute on salary increases for 2021.

Numsa broke away from Cosatu in 2014.

Other Cosatu affiliates, such as the Police and Prisons Civil Rights Union (Popcru), added their support for the protest action, encouraging off-duty members to join the provincial marches.

A statement released by Cosatu said, “the strike on Thursday is legally protected and is focused on pushing both government and the private sector to act to fix the economic mess that the country finds itself in, and take seriously the issues that are affecting workers and South Africans in general”.

Although it was premature to gauge how many members had participated in the stay-away by early afternoon, Sizwe Pamla — Cosatu’s national spokesperson — said the feedback they received had been positive.

“We’re getting positive feedback particularly from industrial areas where it’s easy to determine how many people stayed away,” said Pamla.

But Pamla couldn’t give exact numbers yet “as we’re still consolidating” and additional information was still coming through.

Papikie Mohale, the South African Municipal Workers’ Union’s (Samwu) national spokesperson, said that the majority of their members had participated in the stay-away. Samwu has about 160,000 members.

The stay-away was only announced on Tuesday 5 October, which Trevor Ngwane — activist and social movements and protests researcher at the University of Johannesburg — said reflected how “disorganised” Cosatu leaders were.

“Giving workers short notice for stay-aways and strikes reflects poorly on these kinds of movements because the strength of any protest action is the number of people who are able to participate,” said Ngwane.

In their demands, Cosatu called for the reversal of budget cuts “that have led to an unacceptable wage freeze in the public service, the disintegration of the CCMA, and retrenchments in state-owned companies”.

“We will also be calling on the private sector to abandon its investment strike that has seen many companies either hoarding or exporting cash out of the country, despite receiving generous incentives to invest back into the economy,” reads Cosatu’s statement.

“Government needs to move away from the current neoliberal macroeconomic policy framework and to introduce strong interventionist measures in the economy in line with our perspective of a progressive developmental state,” reads Cosatu’s statement.

The stay-away comes 25 days before the country heads to the polls for the local government elections.

Commenting on the stay-away, Ngwane said that “it is hard to decipher people’s true intentions but because it’s politics, Cosatu could be trying to draw attention to them being the legitimate leader of the working class”.

“For the leadership, it could be about politics but for the working class person, coming out on the streets, it would genuinely be about fighting for their rights,” said Ngwane. DM