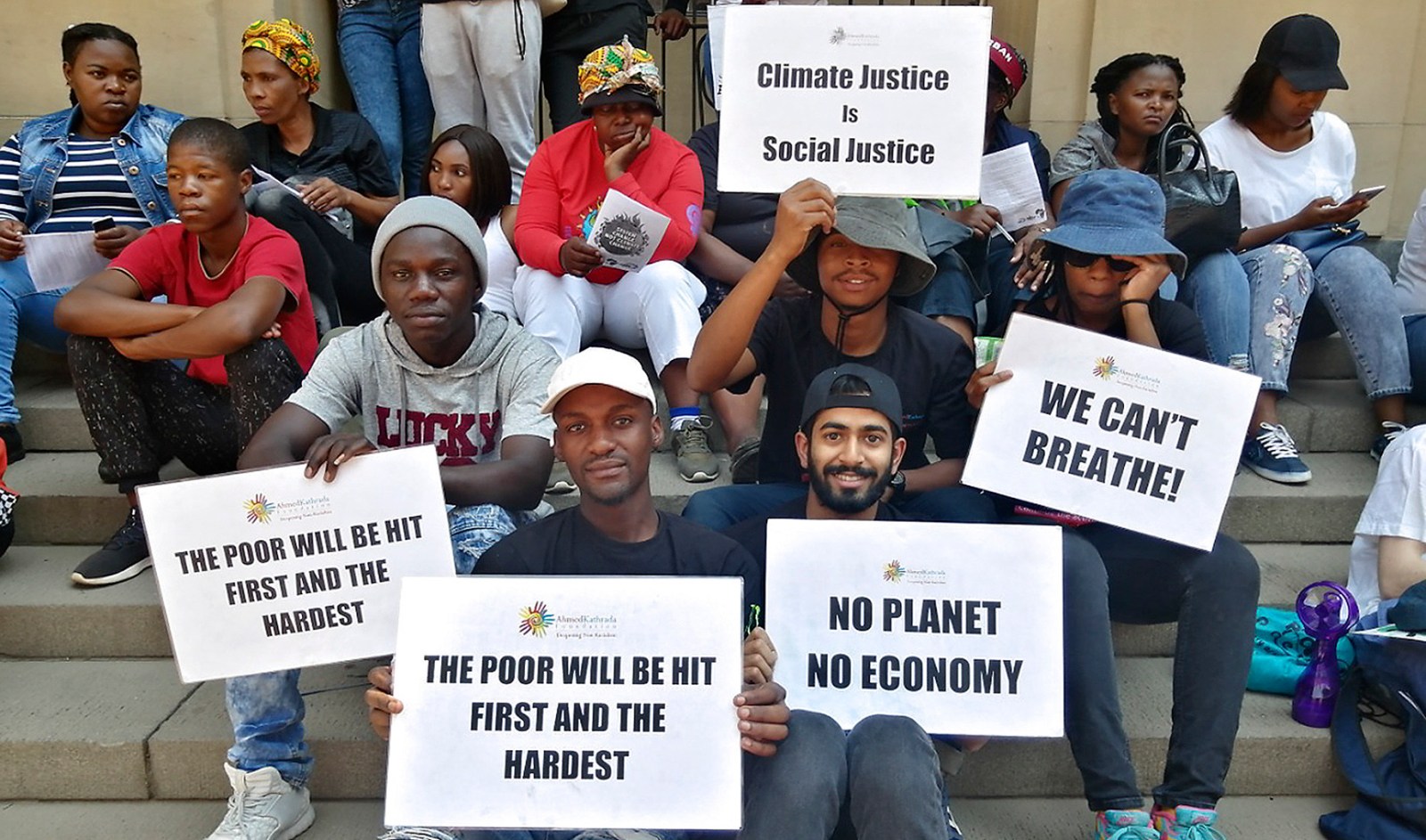 Solidarity emphasises the need to transition away from greed and overconsumption, to sustainable living and renewable energy production. To some extent, that dream has fast become less of a vision but more of an outcry.

Irfaan Mangera is the Youth Activism Programme Manager at the Ahmed Kathrada Foundation.

I once believed that South Africa was a place of hope, where we position justice as a fundamental pillar of our constitutional democracy. However, the reality is much colder and enveloped by a collective outcry for much-needed systemic change. A change that will require a monumental effort by all of us to begin the work of organising, mobilising, educating and agitating for change.

The Kathrada Youth Activism Programme was formed to do just that. To take forward the legacy of the late struggle stalwart Ahmed Kathrada, in the form of organising, training and supporting the next generation of young activists.

The programme has focused on building a base of young people across communities in Johannesburg and, in recent months, across other parts of Gauteng.

This is done through democratically elected, community-based activist clubs with members between 15 and 25 years old. The programme’s training and content focus on providing young people with a greater understanding of democracy, the processes of government, internationalism and, since 2020, a focus on climate change.

It is evident that climate justice remains at the core of our collective struggle. A burning planet means that all of humanity will face a catastrophic and cruel end should we not act now, and act decisively.

Organising across the various Kathrada Youth Clubs has allowed us to experience the triple threat of unemployment, poverty and inequality in greater depth. These issues are deeply entrenched by the failure to achieve economic, social, climate and racial justice 27 years into democracy. One cannot view the economy without consideration of racial equity. Nor can we address gender and racial justice without understanding how this intersects with climate justice.

“In any climate crisis, it is women and girls who often face the greatest impacts from environmental degradation and natural disasters – from increased poverty and escalations in gender-based violence,” Phumzile Mlambo-Ngcuka, executive director of UN Women, said on 5 June 2021.

Through our engagements we have heard statements like “climate change is a white person’s issue”, yet those who will bear the greatest brunt are poor, black vulnerable and working-class communities, forced into living conditions largely formed by apartheid segregated planning and the lack of sustainable development planning after the advent of democracy. This design further exacerbates the racial inequities that continue to exist.

It is imperative that we recognise climate justice beyond an environmental issue, but one of racial justice as well.

As a country that has yet to deal with the failure of its “rainbow nation” aspirations, we recognise the critical racial lines that run parallel to the socioeconomic and climate-change effects. The Ahmed Kathrada Foundation, through its core mandate, has sought to create a “non-racial” society, whereby it runs several anti-racism initiatives.

Rueanna Haynes, a legal adviser at Climate Analytics, argues: “In many countries, economic, environmental and health vulnerability is also tied to the question of race – communities who have less access to different sorts of resources tend to be communities who are more easily exploited.”

This has been evident across many of the communities we work in.

Lenasia, for example, has seen an increase in flooding of homes and streets adjacent to the Klip River wetlands, an inconsistent energy supply that severely affects local economies, and varying challenges to water and sanitation accessibility, particularly in townships.

These are issues that should be dealt with by both provincial and local governments, but with rampant corruption, poor administration and bad governance systems, in addition to a lack of political will, we see how failure to address climate justice is not just an issue of national importance or national policy change. It is about addressing how it affects basic service delivery challenges within local government and other grassroots problems.

When the Ahmed Kathrada Foundation signed the Climate Justice Charter, it was through recognising the need for intersectional solidarity between racial, social and climate justice.

Solidarity emphasises the need to transition away from greed and overconsumption, to sustainable living and renewable energy production. To some extent, that dream has fast become less of a vision but more of an outcry.

People like Mineral Resources Minister Gwede Mantashe continue to advocate for the Turkish Karpowerships, “clean coal”, gas and nuclear energy. These investments are harmful to the environment and have been closely linked to allegations of corruption. A pandemic that has rooted itself in all sectors of society.

Instead of working towards a just transition, we continue to rely on the same old, outdated and catastrophic means to produce energy. This reliance has made life for middle- and working-class communities increasingly difficult. Already the common household faces huge challenges posed by the economic downfall, and with the climate crisis drawing closer to home, daily life will continue to change drastically.

Fires within informal settlements like Thembelihle have destroyed entire families who rely on paraffin and other substances to keep warm, cook and do other household tasks. Families have had their entire lives burnt to ashes. This not only highlights how deep the reliance on fossil fuels extends, but also the fact that the City of Johannesburg had not been able to suitably procure enough fire engines, once again due to corruption and mismanagement, where no one is held accountable.

In communities like Kliptown, Eldorado Park, Khayelitsha and other poor and working-class communities, we have witnessed entire streets filled with raw sewage.

The limited infrastructure in these areas means that daily life is threatened, not just by violence or lack of policing, but because there is no deliberate attempt to address these challenges as a matter of public health. Municipalities are not held accountable for their failure to deliver on their commitments, and communities are left to find solutions to their problems.

The bold steps listed by the activists working on the Joburg Youth Climate Action Plan indicate the need for an urgent and immediate change on how municipalities operate. Not only to signify their verbal commitments to the international community, but to enforce strict and measurable timelines within which its public officials and various entities can begin implementing.

This kind of collaborative policy engagement is fundamental in ensuring young people’s voices and demands find expression within the systems that govern us. It highlights the need for us to work with all communities to strengthen that voice into one that is impactful, and to do that we must organise and build consciousness within our community regardless of how hard, challenging and isolating it may feel when fighting against those who are completely opposed to change and who do not believe in climate science.

Groups like the YEA (Youth Eco Activists) Network have created a space for youth groups, climate activists, farmers and community members to connect and collaborate for change. It is these small spaces of networking and movement building that will lead to greater systemic change. Raeesah Noor-Mahomed, Celiwe Shivambu, Courtney Morgan, La’eeqa Martin, Tyler Booth, Sibusiso Mazomba, Ditebogo Lebea and Ashlin Naidoo are just a few of the young activists leading the fight for climate justice.

Our role is to follow, organise and support their efforts within our spaces so that we build a progressive mass base of people who can learn, advocate and strengthen the bonds between our collective struggles in order to posit climate justice at the core of our struggle and to hold those in power to account for their actions or lack thereof. DM/MC

Irfaan Mangera is the Youth Activism Programme Manager at the Ahmed Kathrada Foundation.