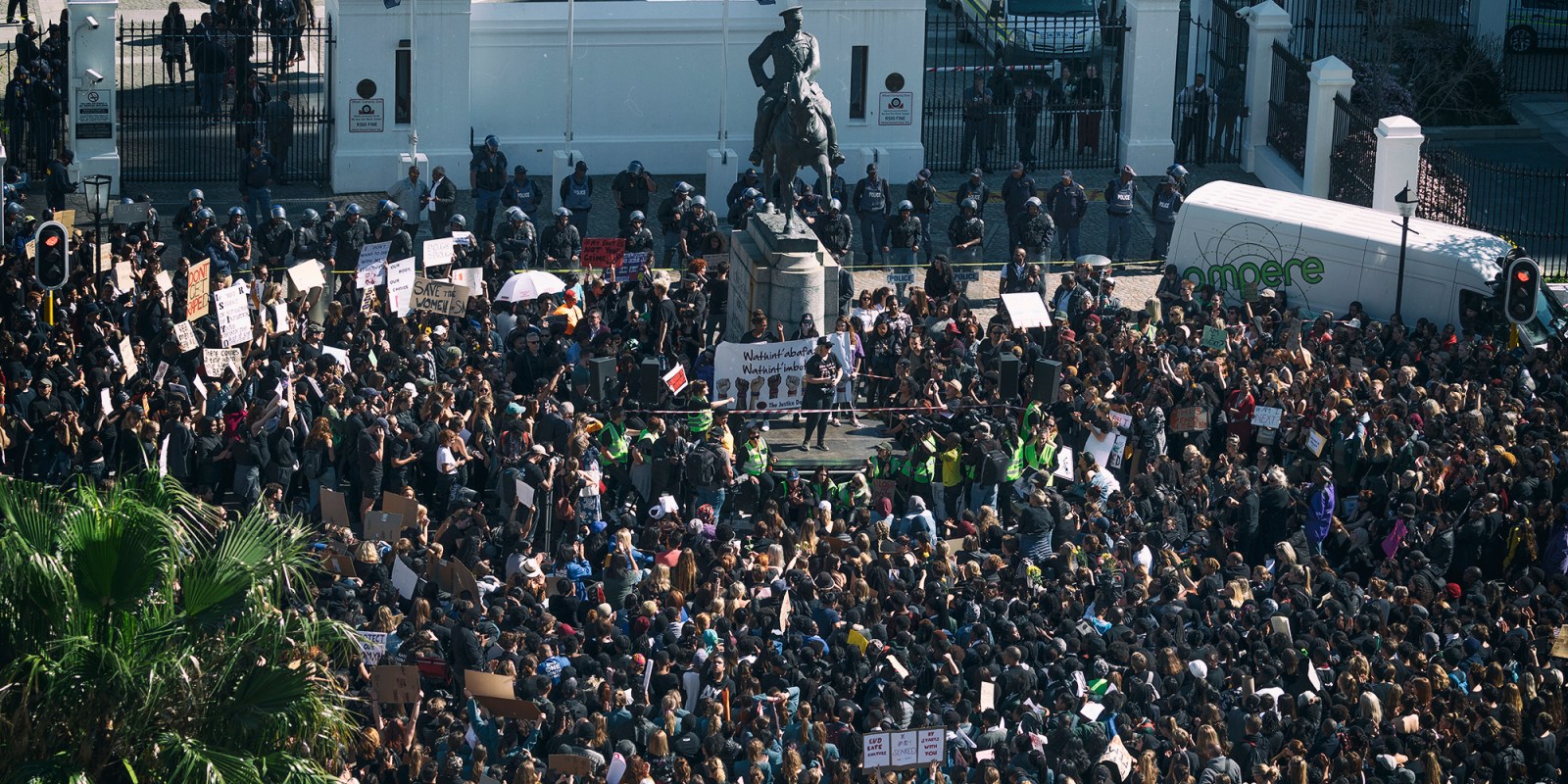 Tens of thousands protest outside Parliament in Cape Town on 5 September 2019 against gender-based violence after a week of brutal murders of young South African women. (Photo: EPA-EFE / Nic Bothma)

That we know so little about violence against women and children limits our ability to respond. Filling these data blind spots will be crucial if we are to end the harm that violence causes across the country.

Yet, for many working in the GBV sector, legislative gains are too little and too late. Frustration among activist groups and civil society culminated in the 2018 #TotalShutdown movement. This outcry for ending GBV and femicide (the killing of women by romantic partners or non-partners) led to a National Strategic Plan signed by the presidency, but the pace of implementing this plan has been slow.

Now — with better policy in place — we need a better grasp of how big the problem is. The rates of GBV in South Africa have never fully been mapped out, making it hard to target funding appropriately.

To be sure, some careful work to measure GBV exists — notably a Medical Research Council study showing South African rates of femicide are six times the global average. But unlike many other countries in the SADC region, South Africa does not systematically collect data on GBV.

Glaring blind spots in GBV data makes us reliant on sensational events, like recent Western Cape femicides, to spur the government into action. What we need is more consistent data that tracks trends over time and asks a representative group of residents to offer views on violence exposure.

New survey results launched recently by the Gauteng City-Region Observatory (GCRO) start to fill this gap in the Gauteng Province.

The survey, called Quality of Life, is done every two years and helps guide some of the most pressing problems in governance, resource allocation and city planning in Gauteng. The survey is partly funded by the provincial government and is a collaboration between the University of Johannesburg and the University of the Witwatersrand.

From October 2020 to May 2021, trained fieldworkers spoke to 13,616 participants about their experience of living in the province. All participants were then handed a tablet and asked to self-complete a section about exposure to violence — both remembering their own childhood and during the past year as adults.

The questions were about certain acts (“kicked, hit, pushed”) rather than asking “have you been abused” since many people experience these forms of violence, but do not identify as being a victim of abuse.

The acts in adulthood were about the past year, offering a useful snapshot called an “incidence rate”. Importantly, the survey is population-based, which means households were randomly sampled from each of the 529 wards in Gauteng. This gives a somewhat truer picture of violence against women and children than past research from groups attending clinics or shelters.

Of the 7,276 women approached by fieldworkers, 86% were willing to complete the self-complete section on violence. Among these women, 5% reported past-year exposure to partner violence.

This rate of partner violence is similar to the one other population-based study led by the South African Demographic and Health survey in 2016. It is lower, however, than 13% of Gauteng women reporting partner abuse in a special violence-focused survey by the non-government organisation Gender Links in 2011.

We believe it’s fair to consider 5% a floor-level estimate of women exposed to past-year partner violence, which suggests a need for care and support services for roughly a million female residents in the province.

In the past year, 1.7% of females reported rape by either a partner or a non-partner. This suggests a population-based incidence of rape of 1,700 per 100,000 population.

This is roughly twenty-fold higher than police reporting for 2020. Certainly, professionals working to help GBV victims frequently note the difficulty for rape survivors to report their trauma to police.

But without a national representative estimate of women’s exposure to rape, it is difficult to grasp the scale of the problem or mobilise sufficient resources to address it.

Any physical trauma during the past year was reported by 16% of respondents opting into this section of the survey. Young males were particularly vulnerable, with 31% of males aged 18-24 reporting physical trauma in the past year. Examples of this included being “hit”, “kicked” or “dragged” by anyone.

One in 10 respondents (10%) was threatened with or hurt by a knife or gun in the past year.

This high rate of childhood violence exposure was similar for older people and for younger age groups. These data suggest sexual abuse against children may not be improving even as important national structures like the Children’s Act have developed over time.

Childhood exposure to violence is a topic with prior population-based data from South Africa. Our findings suggest that rates of physical and sexual childhood abuse in Gauteng are more than double the rates in Mpumalanga.

Overall, these findings suggest that childhood abuse and past-year incidence of rape are much higher than reported by police statistics in Gauteng.

The next Quality of Life survey is unlikely to show a reduction in Gauteng rates of violence without the implementation of considerable financial backing for victim support and long-term prevention strategies.

South Africa has long over-emphasised extended prison sentences (shown to do very little to deter violent crime) and spent most of the national GBV budget on criminal and forensic services (despite no improvement in femicide conviction rates).

The bills passed are a start — especially due to the addition of online protection orders and a legal obligation for health workers to respond to GBV.

As Lisa Vetten, researcher at UJ and Wits explains, “for far too long health workers have simply treated injuries, passed out pain killers, and left it at that. Now they will be required to refer women to further assistance, which will communicate the important messages that: domestic violence is not to be suffered in silence; help is available, as is the opportunity to lead a life free of violence.”

As the National Strategic Plan on GBV and Femicide is fully funded over the coming months, we make an urgent plea for the government, donors, and the corporate sector to:

In a society with extraordinarily high levels of community trauma, policing our way out of the situation is unlikely to prevent future violence. Preventing violence before it starts through safe parenting and community mental health services will be paramount.

This is because childhood abuse reported by Gauteng residents is deeply linked to rape and partner violence in adulthood. When a child grows up traumatised by abuse, neglect, or watching their own parents fight, they are less able to calm themselves, have fewer coping skills, and find it difficult to form strong relationship bonds.

For example, another study from Diepsloot, a peri-urban settlement in Gauteng, found that men exposed to child abuse had five times the odds of perpetrating GBV as adults.

The Quality of Life Survey 2020/21 offers an urgently needed snapshot of current rates of rape, partner violence and childhood abuse in Gauteng. It is also the first study since 1997, to our knowledge, to estimate a population-based incidence of rape in the country.

That we know so little about violence against women and children limits our ability to respond. Filling these data blind spots will be crucial if we are to end the harm that violence causes across the country. DM