A DA ward councillor candidate in Cape Town has released a campaign video clip, with a soundtrack and storyline to boot, that portrays him as a hero clamping down on crime and ready to help frustrated residents. Here, with tongue in cheek, much like we did with political party manifesto launches, we review the ‘movie’. 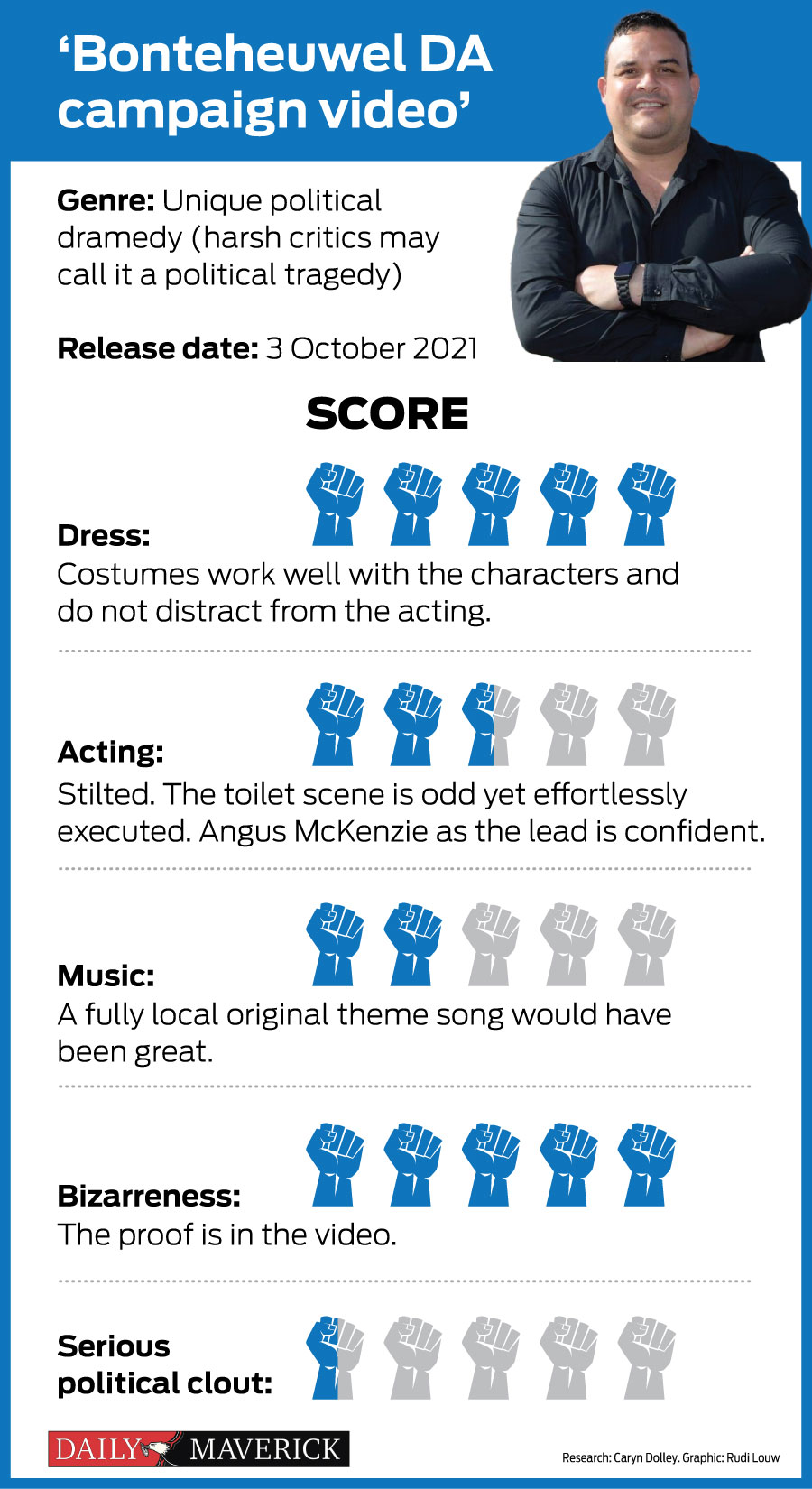 If anything, it is an unforgettable one minute and 38 seconds.

It leaves one questioning its veracity.

And this is where Angus McKenzie, DA ward councillor and 2021 candidate for the Cape Town suburb of Bonteheuwel, scores highest – hitting the incredulity factor hard on the head.

McKenzie launched a campaign video on his Facebook page, produced by one Nadeem Parker, on Sunday, 3 October.

The array of characters in his 98-second skit includes a gunman, another man sprawled on the ground, McKenzie as a punching politician to the rescue, cheering residents, and, in between the action, a scene involving an unflushing toilet.

All this is accompanied by a rather unique local remix of the Ghostbusters theme song.

“Daar’s ‘n skietery in die hele hood (there’s a shooting in the whole hood), for who you gonna vote? Vote Angus!” is one of the lines sung to the Ghostbusters tune.

Bonteheuwel, the ward McKenzie hopes to retain, is one of Cape Town’s many areas on the Flats that bear witness to gang violence.

His quest to retain his position as councillor sees him up against the likes of the Patriotic Alliance’s Moulana Ebrahim Kasper and the ANC’s Patricia Benjamin.

Unlike McKenzie, neither has released a video extravaganza.

Meanwhile, in terms of who has the most clout when it comes to tackling crime, the Western Cape is run by the DA, while national government is led by the ANC.

This has often resulted in spats about policing in Cape Town. Because the police service is a responsibility of national government, opposition politicians are quick to home in on its inability to effectively deal with crime, especially gang violence.

The McKenzie campaign video taps into this.

Without going into too much detail to avoid spoilers, it essentially shows two residents who are frustrated because they have no running water at home.

It also shows a gunman and a man lying motionless on his back on the ground – presumably a victim of the gunman.

Cue predictable plot twist, accompanied by a dramatic change in music, and enter a strutting McKenzie, resplendent as a hero who takes on the baddie.

One part pulls no punches, showing McKenzie throwing a punch at the gunman – let us assume the camera stopped rolling and he called police first, and that his intention here was to highlight that crime is bad and that he was not promoting vigilante justice. (Let us also point out here that politicians are not known for approaching, let alone punching, armed criminals. They are known for complaining that criminality isn’t being effectively dealt with and – as we know full well – in some cases being accused of wrongdoing themselves.)

Another scene shows only McKenzie’s legs as he walks past what appears to be a city law enforcement or metro police vehicle, adding an element of gritty realism to the production.

Creative camera work and editing – we even see the underside of McKenzie’s shoe at one point (it is very clean) – keep the pace brisk.

The standard of acting in some cases leaves much to be desired, with characters appearing stilted and contrived (on a par with the storyline).

McKenzie, however, comes across as confident, as a seasoned politician accustomed to putting on a show – his performance oozes “there’s only room for one sheriff” vibes.

But the video does not necessarily inspire confidence.

Initial comments posted in response to the video on McKenzie’s Facebook page were mostly positive. However, some Twitter users found it somewhat weird and baffling.

For instance, Chester Missing posted a review of the “crazy-as-hell DA elections video”.

My reaction to that crazy as hell DA elections video. pic.twitter.com/DpsE8SG2As

The video does indeed focus on serious issues, including access to running water which in turn links to service delivery and crime, especially involving residents caught up in the violence.

But McKenzie has been ward councillor in Bonteheuwel, and one might point out that the issues highlighted in the video – even though he portrays himself as dealing with them – have continued during his and his party’s watch (beneath the overarching ANC national umbrella, of course).

Indeed, part of the lyrics to the Ghostbusters tune go like this: “There’s a geblokte drain in die Bonteheuwel (There’s a blocked drain in Bonteheuwel). Who you gonna call? Call Angus!”

Given the music and overall tone and delivery, the video could come across as being in poor taste.

A politician hinting at his own purported crime-fighting prowess, even in a light-hearted manner or in keeping with political showmanship, may be too over-the-top gimmicky for those with genuine and valid concerns about crime and the dire state of policing in South Africa.

McKenzie has previously irked opposition politicians when it comes to enforcing the law in the DA-run province.

In June 2020 it was reported that he angered the ANC when accompanying city law enforcement officers during an operation in Bonteheuwel – one photograph showed McKenzie holding onto the side of a City bakkie.

A subsequent ANC statement reportedly said: “In these pictures, councillor McKenzie is clearly demonstrating interference in the work of City employees. What we’re seeing is abusive power and contravention of the Code of Conduct, which is clear on what is expected of councillors.”

Back to McKenzie’s performance in front of a camera. His campaign video might seem odd, and to some even counterproductive in terms of portraying him favourably, but this is politics and so the unexpected and strange should be expected.

It may even appeal to younger voters and those who find local politics boring (but this is South Africa and let’s be real, politics here is anything but that).

McKenzie’s campaign video is, if nothing else, different. It’s true what they say – there really is no business like show business.

The verdict will be in the eye of the beholder – in this case, those who take the trouble to find the video and watch it online.

Whether positive opinions will translate into votes, well, that might even produce enough material for a sequel. DM

Send us your pothole pictures. Thank-you! We have all the councillor ratings you submitted to us and will present them to you this week. From the first set of questions to our readers, you said that road conditions have deteriorated substantially or that roads are, in fact, non-existent. Now we want to see for ourselves what your road conditions are like. Send us images of the road conditions and of potholes so we can show and tell the authorities where the problems are. Send to: [email protected]