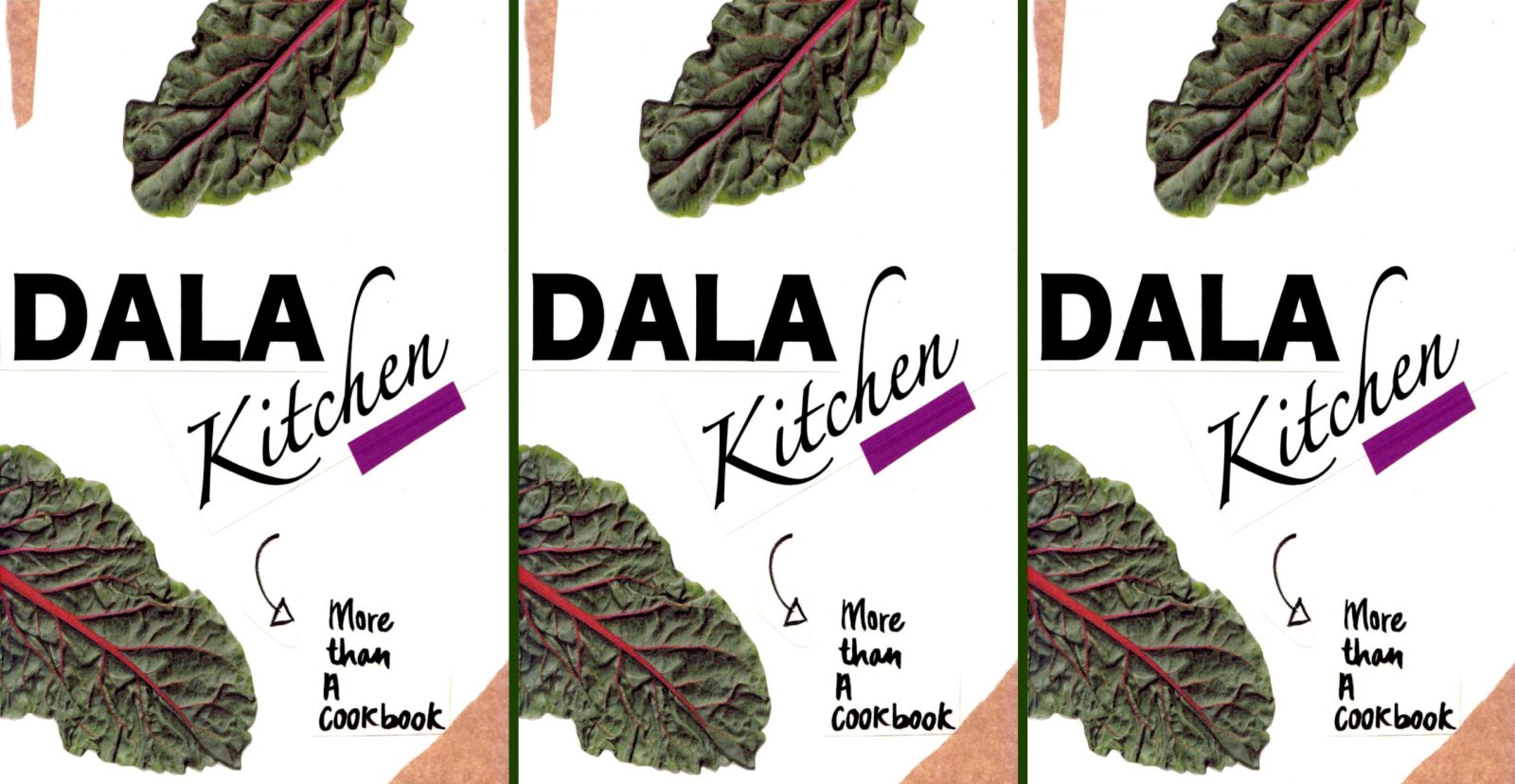 Whether it’s in a community kitchen cooking for large groups of people or for a household, in ‘DALA Kitchen’ you can gather inspiration for tasty, nutritious and inexpensive meals. You can also learn about self-organising from the bottom up — the messy, non-linear process of building relationships that is necessary for working together.

Shirley Walters and Astrid Von Kotze are educational activists and part of the Newlands (Cape Town) CAN.

Would you like to help make people from West Africa feel at home? Cook a pot of Nigerian jollof rice! As Nana Odumuko of Ekuphumleni Community Action Network (CAN) says: “Jollof rice is a cure for xenophobia!”

Or invite them to enjoy your local Umngqusho, cooked here in Mama Lulu’s kitchen in Langa. There is also fish breyani from Wesbank, chicken akni from Bonteheuwel, bean soup from Kenilworth, potato koesisters from Ocean View and much more to realise that “local is lekker”! 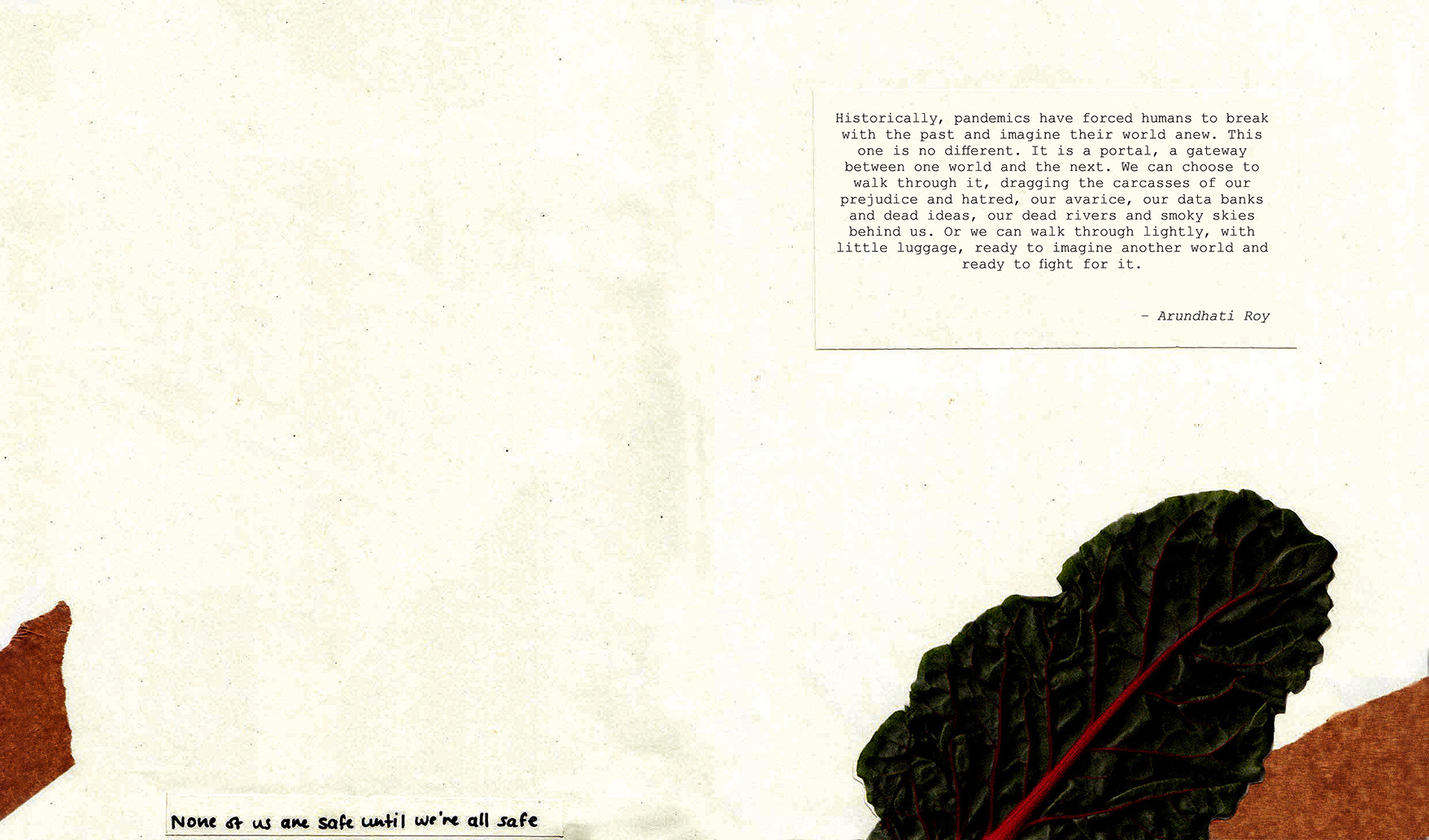 Whether it’s in a community kitchen cooking for large groups of people or for a household, in DALA Kitchen you can gather inspiration for tasty, nutritious and inexpensive meals. You can also learn about self-organising from the bottom-up — the messy, non-linear process of building relationships that is necessary for working together. You can wonder at the determination of inspired people who work against the odds, caring for others. And you can gather stories about how community initiatives are shaped and maintained.

It is a beautiful book — hand-made, sturdy, illustrated with humble spinach leaves and herbs, cut-outs, pictures and maps, all in a collective process of creating something “more than a cookbook”.

The creation of DALA Kitchen was a participatory process. Its purpose was to facilitate a space of reflecting and sense-making of the “magical chaos” since the beginning of Cape Town Together amongst the Connecting CAN and the wider network.  This happened through invitations to identify recipes, stories and images; to bring them to face-to-face workshops at Gogo’s Kitchen in Gugulethu, all Covid protocols observed. 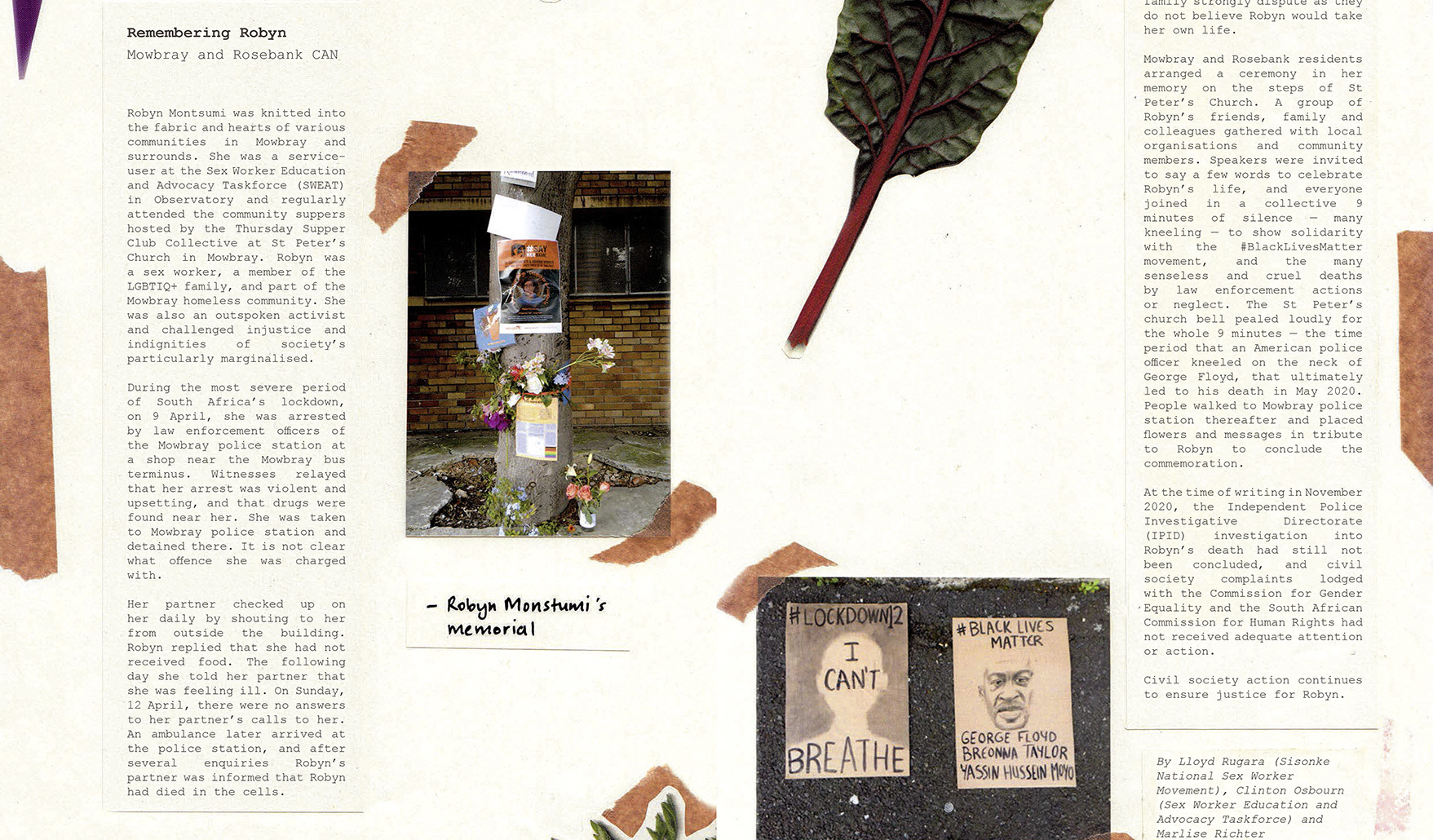 Working around tables with newsprint and spinach leaves, parsley and pressed flowers, we played and co-created.

The stories, images and recipes paint a picture of both the magic and the joy, as well as the hardship and heartache that is Cape Town Together in the midst of Covid.

The recipes for making a delicious dish are very similar to those for creating a productive learning event. Learning has been an integral part of the CANs. You start by defining the purpose. For example, “how to organise a community kitchen” — once this is agreed, you gather the ingredients, including the participation of multiple different voices; the session must be accessible, and those who need it, are offered data to participate. Once the purpose is clear, “pick a chef” ie a facilitator, set ground rules, and run the session “gently”, with the right spices, so that all can feel included to speak up and out.

As Pamela Silwana of Gugulethu CAN says, “I realised that if I had kept quiet, something valuable would not have been said.” 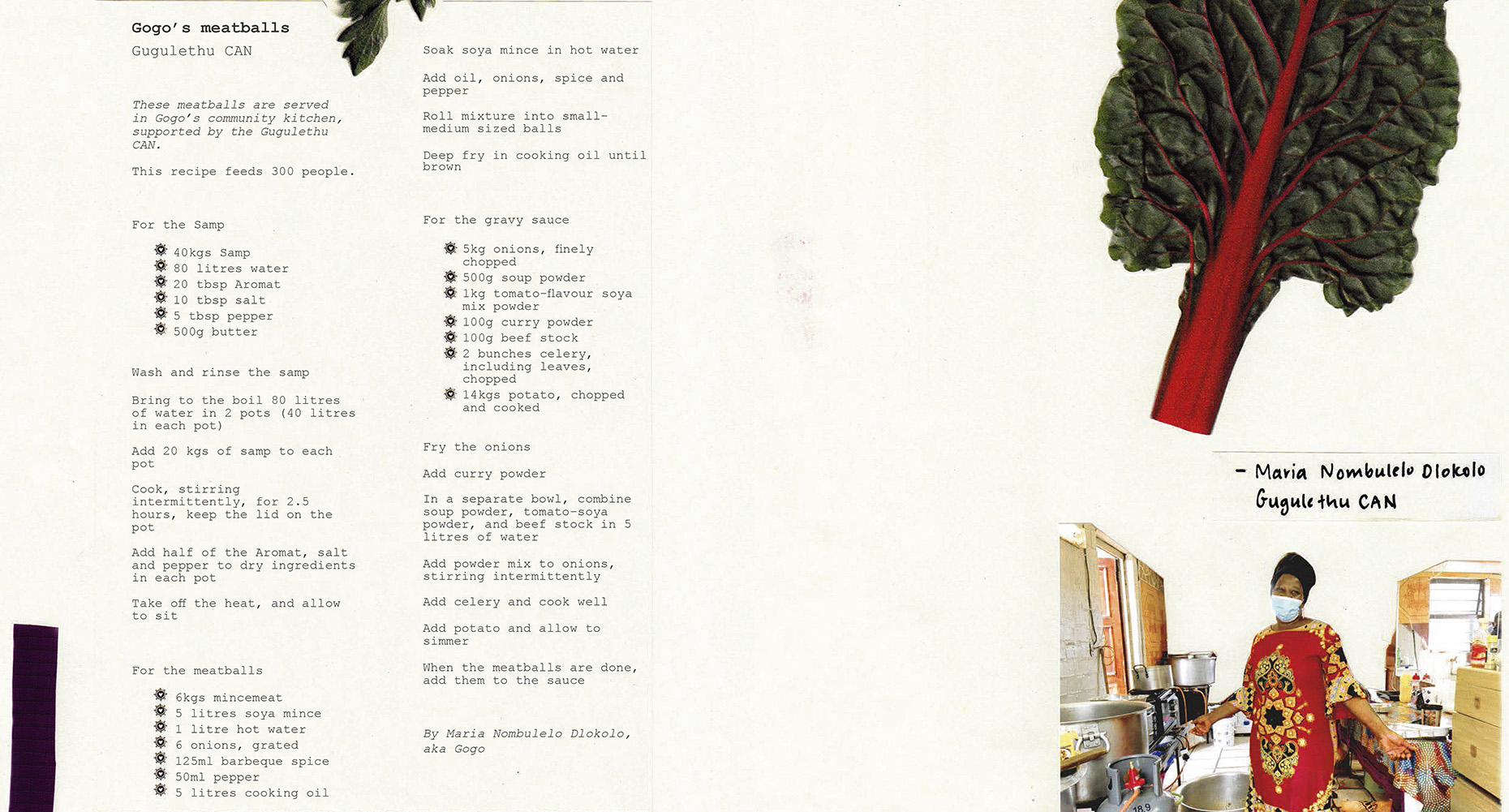 DALA Kitchen demonstrates how the most important ingredients in any recipe are the relationships: working together as equals and having fun with a strong sense of common purpose for a common good. Different CANs had diverging views on making and building connections across apartheid spatial planning. Trust is earned; it cannot be taken for granted.

Some lesser-resourced CANS paired with more-resourced CANs and this demanded discussions around power and the question of purpose: The ethos of networks was solidarity, not charity, and respectful listening to “community intelligence” was key to decision-making.

Others paired up/supported existing community structures and forged new relations around the urgent need to strengthen local capabilities and livelihoods.

Whatever the connections made, all worked along the same principle of “calling in”, not “calling out”, working at the speed of trust, listening and being open, tolerating ambiguity and tensions, taking time and considering that all of us have multiple responsibilities as well as being, as activists, short of energy and patience at times.

Care means allowing things to emerge and then negotiating towards a collective decision. Care also means having fun: enjoying meeting new people and hearing other viewpoints, and taking calculated risks when exploring new ways of fundraising or cooking.

Relationships have not always been easy, particularly with political parties or local councillors. CANs have chosen to be non-aligned politically in order to get on with serving the needs in their neighbourhoods. 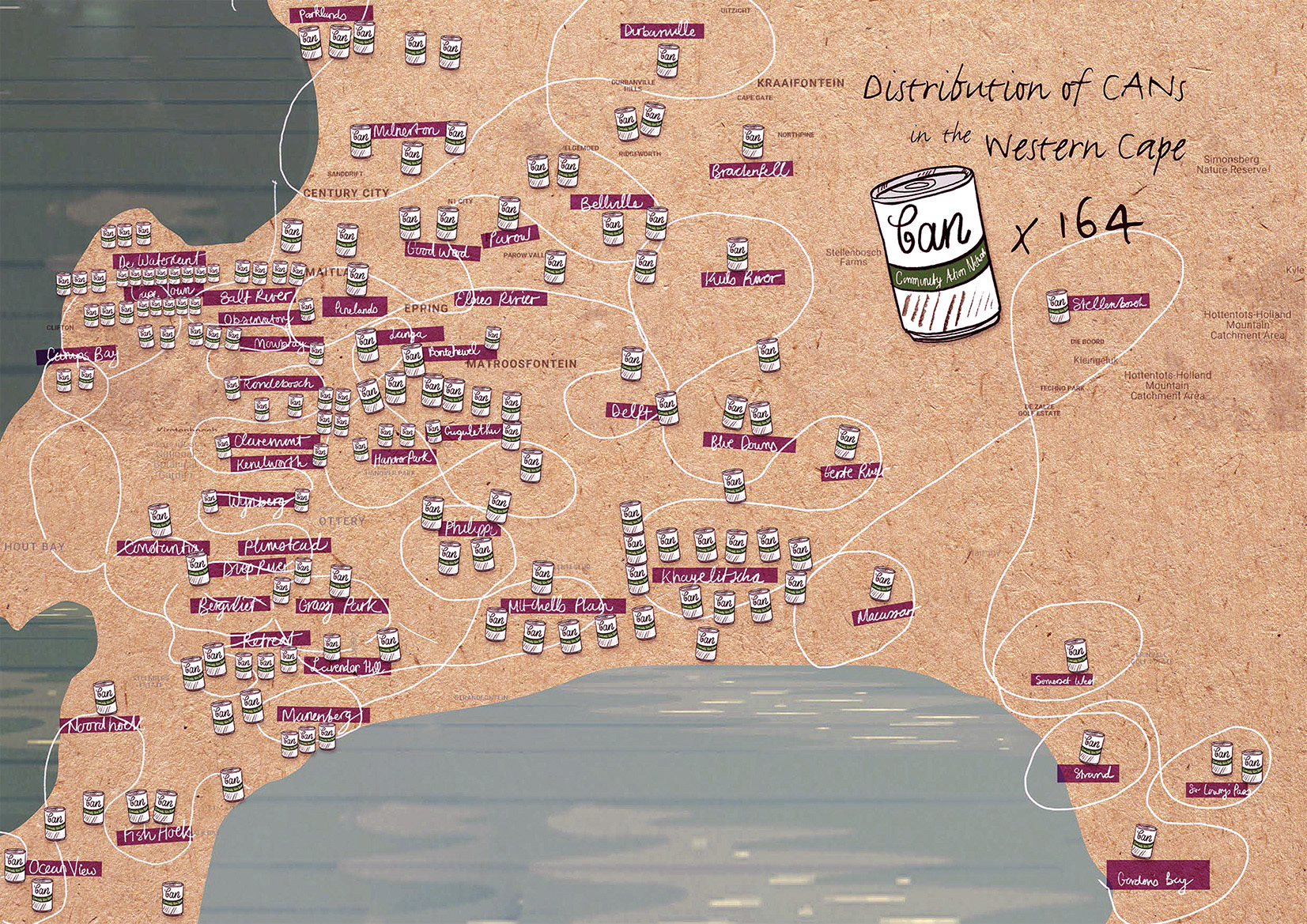 This self-reliance can be seen as a threat. Tafelsig CAN describes how the community power they built is not always recognised or accepted by people in authority. In Bonteheuwel there was a public spat at one stage between the CAN and the local councillor.

The big G and the little g

The importance of knowing the difference between working with big “G” and little “g” is described in another story. Big “G” is “the government” and little “g” represents those public servants who are working hard to share resources and create new possibilities for collaboration, despite systemic constraints. While it’s easy to feel anger, disappointment and rage against  “the government” for lack of services, CANs have found that it’s in the interactions with individuals (the little g’s) where opportunities to build trust with the state can lie.

The success of the CANs highlights the shortcomings of the big G response and can be seen as a political threat by those in authority. The danger of community organising becoming political point-scoring rather than problem-solving is well-recognised.

At this time of local government elections, we need councillors in place who are encouraging of community initiatives and are willing to work together in the interests of the common good. The “little gs” who are doing the work of caring for those around them need support and encouragement to build strong supportive relationships between government and civil society organisations. (Before we cast our vote, let’s ask those standing what their position is on these issues!) 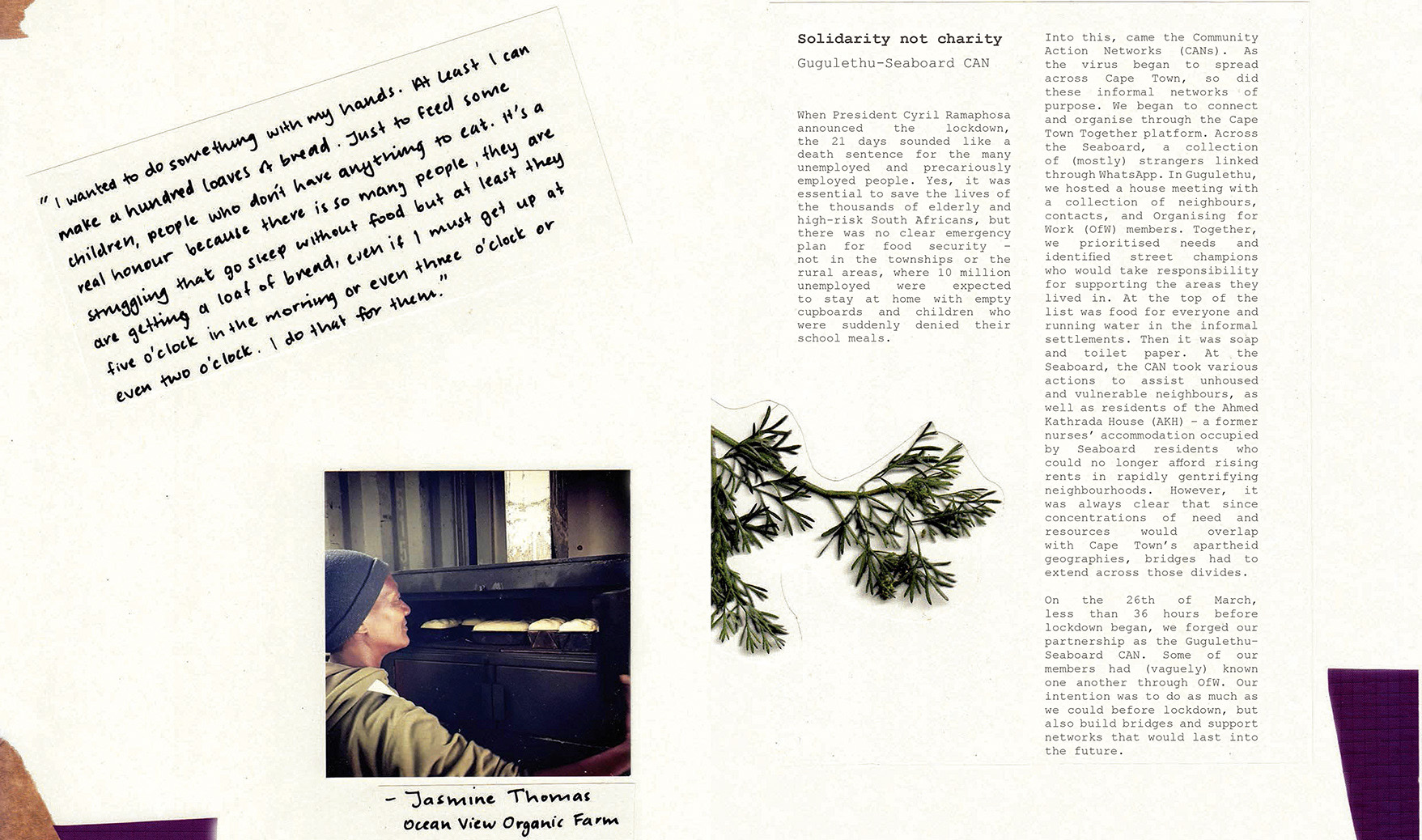 The collective power of CANs has a particular strength that translates into an upbeat energy. The “light touch” that comes from compassion and empathy, a sense of political outrage and belief in agency, is inspired by the joyfulness of “dala” — making things happen, together.

For example, in October 2020, the CANs of Langa, Bonteheuwel and Pinelands organised a bike ride across the apartheid spatial planning that has kept them apart. Gathering crowds of supporters along the way, they navigated the physical obstacles of freeways and railway lines on their bikes. In Langa they learnt that bicycles had been key to delivering food and medication during lockdown. Girls and women on bikes challenged gender stereotypes, and the women loved it.

Bikes have been connecting people street by street, subverting the anonymity and individualism of city structures. Bikes have helped place power into the hands of local women and male self-organisers. There is enormous power in combining serious action with playfulness.

Co-producing a cookbook with recipes for cooking and organising has brought to the fore many different forms of knowledge. Trust, solidarity, interpersonal relationships and horizontal, post-heroic leadership have been prioritised as a “politics of care” — all contributions are valued and recognised. This investment in care stands in stark contrast to the dominant aspects of the state’s response to the Covid crisis, which was largely top-down, hospi-centric and out of step with the lived realities of the majority of people. 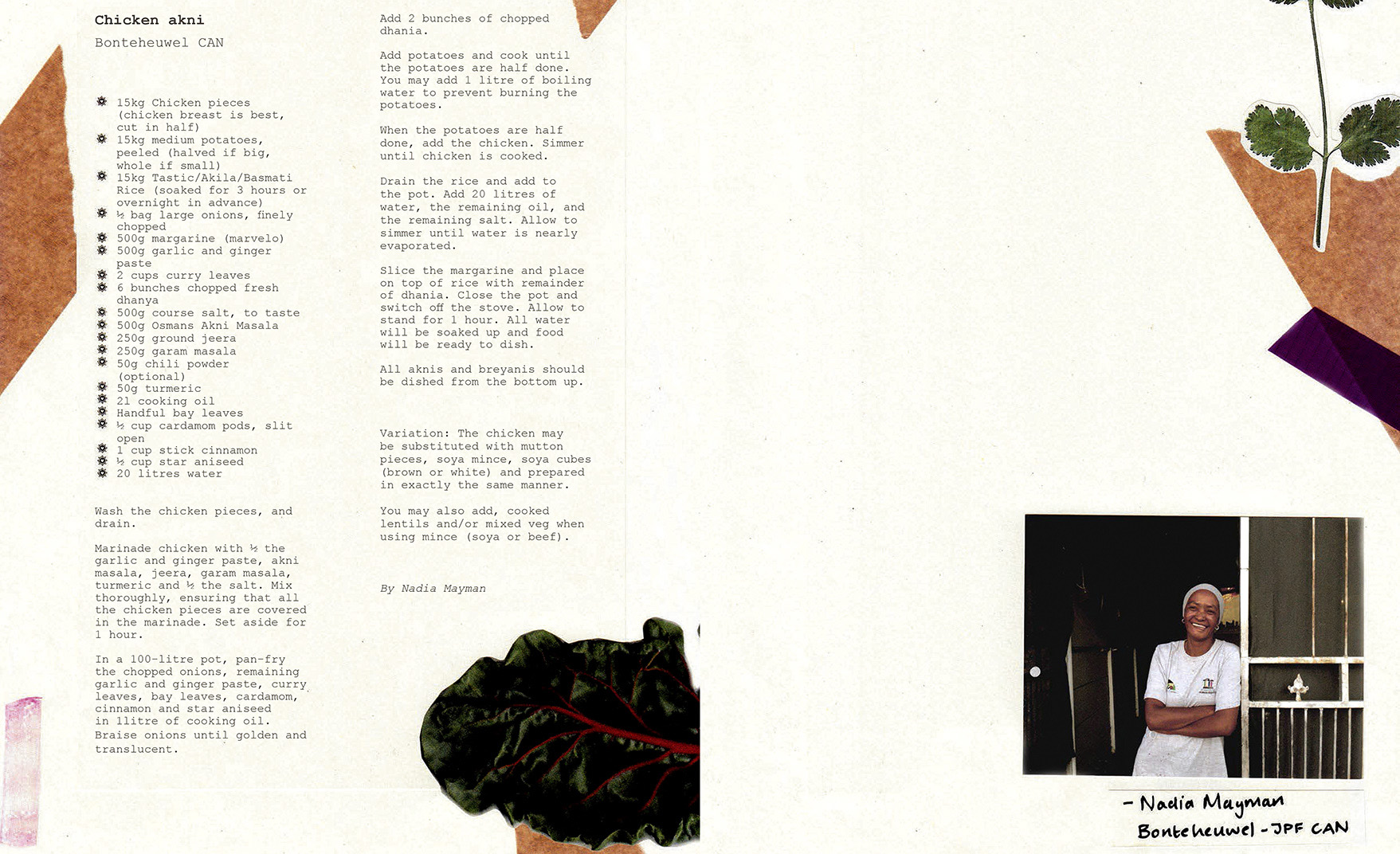 DALA Kitchen is a hopeful manifestation of the power of people caring for each other through self-organised responses. The CANs are, of course, not completely new modes of organising — they build on community-led organising of the past — however, the awe-inspiring impact of the CANs constitutes a powerful argument for a new way of thinking about how we respond to crises in the future.

CANs are not “plugging holes” in the social safety net — they are examples of the power of care-work and “active citizenship”, both critical to a functioning democratic and just order.