Update and Apology: No friend of the homeless – The FF Plus candidate accused of online bullying and harassment 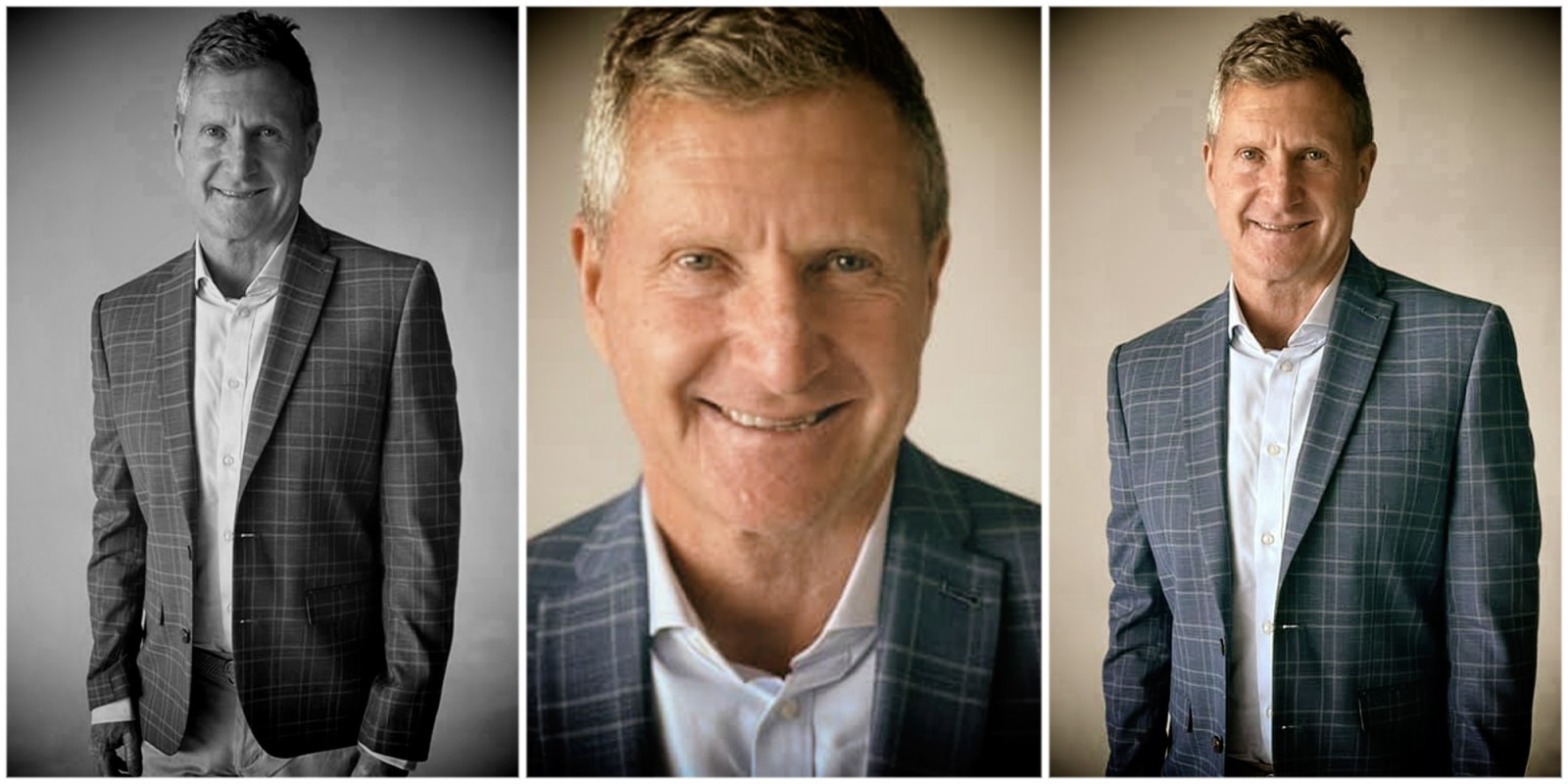 When the Freedom Front Plus announced its top 10 candidates seeking election in the Cape Town Metro last week, one name raised eyebrows. Paul Jacobson, who is running as the party’s candidate in Sea Point, has been embroiled in countless disputes stemming from his stance on homelessness. We have updated this article and apologised to Mr Paul Jacobson for an error in misinterpreting a High Court judgment. Read the revised version here.

With the Covid-19 lockdown causing hunger on the scale of a national crisis in 2020, one Sea Point resident decided to do something about it. Peter Wagenaar began waking at 4am to cook food for distribution to homeless people from his car.

Wagenaar had been giving breakfasts and dinners to about 100 people a day for more than a month when he awoke in the early hours of 6 May 2020 to find that his Mini had been set alight and burnt down.

The incident, which was well publicised at the time, caused outrage. It seemed clear that the arson attack on Wagenaar’s car was linked to his philanthropy, because a fierce debate about his feeding scheme had been raging online in the days leading up to the attack.

One of Wagenaar’s primary critics was a Sea Point businessman named Paul Jacobson, who was so angered by Wagenaar’s charity that he “doxxed” (posted personal details about) Wagenaar online. 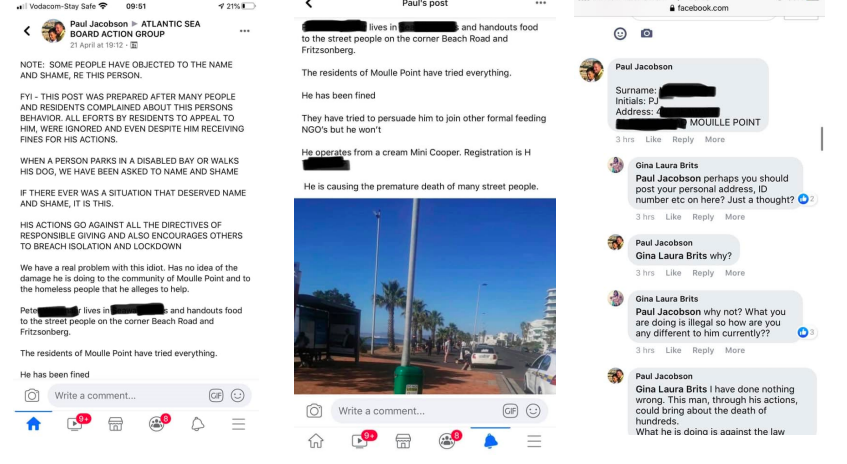 On Facebook, Jacobson later defended his decision to doxx Wagenaar on the grounds that he was “naming and shaming” him for actions that Jacobson felt would contribute to keeping people living on the streets. He has always denied direct involvement in the arson attack.

Jacobson, who owns a pet-food store, is well known to Sea Point residents for his outspoken views on issues like homelessness. He has now been announced by the Freedom Front Plus as the party’s candidate for Ward 54 in Cape Town — which includes Sea Point — and has also been named as one of the FF+’s “top 10” candidates for the Cape Metro.

The FF+ failed to respond to Daily Maverick’s requests for comment on Jacobson’s controversial history.

Jacobson told Daily Maverick that any implication linking him to the arson attack on Peter Wagenaar’s car was part of a “campaign” to “tarnish my good name”.

He said: “I have never been a suspect nor have I ever been investigated for this incident.”

Jacobson hinted to Daily Maverick that he might sue for defamation if “any person… publishes a link between myself and the burning of the car”. He said that the high court “has already found that those allegations were, in fact, defamatory”.

He was referring to a Cape Town in September 2021 where it was found that Jacobson had been defamed online by a critic calling him “misogynistic” and a “nob”.  Judge R Allie also found: “There is no objective proof adduced in evidence… that… the publication of Mr W’s contact and vehicle details were the direct cause of his vehicle having been torched” and that the statements made by the critic on Facebook were defamatory.

Jacobson told Daily Maverick that standing for election was a decision he took after being involved in “community matters” for the past six years. He claimed that the DA is failing “many communities” in the Western Cape, “specifically” the Atlantic Seaboard.

“Our ocean is polluted with sewage, litter is sprawled all over our sidewalks and on our beaches, our women and children are not being protected, our visitors and tourists are being harassed and mugged, our destitute are left to die on the street in the most undignified way, taxi drivers wreak havoc on our main roads, and our rate payments for our properties are highly inflated and not in line with the true valuations,” Jacobson said.

It is Jacobson’s objection to homeless people on the streets of Sea Point, and his manner of campaigning against them that has seen him attract the most controversy. Jacobson has repeatedly argued against giving any support to the homeless beyond directing them to city-established shelters.

One of Jacobson’s previous activities saw him distribute a pamphlet — described by activists as “demeaning and vile” — featuring pictures of naked or partially dressed homeless people, which questioned: “Why are vagrants still in occupation of the Atlantic Seaboard?” One answer suggested by Jacobson was that “leftist organisations and their funders with nefarious political motives want them on the streets to further their sinister political agendas”.

The issue of homelessness in Cape Town looks likely to become a hot-button issue in the remaining weeks till the November local government elections. The Good party and the DA are already embroiled in a battle over the hypothetical release of land for housing, while the Covid-19 lockdown looks to have exacerbated Cape Town’s homelessness crisis. While the City of Cape Town claims there are sufficient shelters to house all of Cape Town’s homeless, NGOs say there are as many as 14,000 homeless people and just 1,233 bed spaces available.

Activists have also pointed out that there are multiple reasons why homeless people may be reluctant to go to shelters, including the fact that most shelters charge a fee, and specific support for residents battling mental health problems or addiction is rarely available.

In Sea Point, the question of how best to manage the problem of homelessness has been fiercely debated.

Jacobson is part of a small group of men who have been accused of online intimidation and bullying by women living on the Atlantic Seaboard, and who have responded by repeatedly approaching the courts against their female critics. Daily Maverick has spoken to three women who detailed their experiences, but declined to go on record due to the litigious nature of the men in question.

In the course of one argument about homelessness, Jacobson posted on Facebook in regard to a female critic: “Does anyone know where this [name redacted] lives. You see, having grown up in Sea Point, and having gone to a hard school like Sea Point High, we often solve these matters the streetwise way. Does someone know where she lives?” 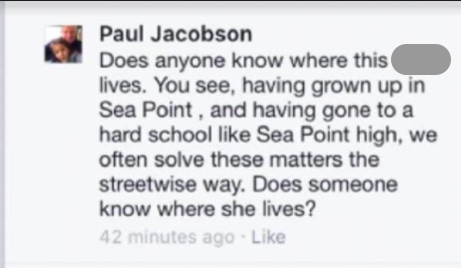 Another figure accused of online harassment related to homelessness in Sea Point is Rob Hersov, a businessman who refers to himself as “the unelected mayor of Africa”.

Hersov, the son of Anglovaal chairperson Basil Hersov, runs a members-only WhatsApp group that subscribers pay to join, on which he regularly rails against “leftists” supporting the homeless on the Atlantic Seaboard.

Hersov referred to one such woman as an “evil bitch” and a “monster”, saying he “[wanted] to find” her. A message was subsequently sent from Hersov’s phone to the woman in question — seen by Daily Maverick — saying: “I know who you are. And a lot more.”

When an article was published in the Weekend Argus detailing various allegations against Hersov, he proceeded to threaten editorial staff until the article was removed — although it has since been reposted online. Hersov did not respond to Daily Maverick’s request for comment.

Current DA ward councillor Nicola Jowell has referred to Jacobson, Hersov and a few others as using “schoolyard bullying tactics” in an attempt to “undermine and paralyse women in the community in particular, who have been brave enough to speak out”.

In response to the allegations, Jacobson told Daily Maverick: “I have never been accused of harassing women, except for the few that oppose my political stance and values.”

Even beyond his personal controversy, Jacobson has his work cut out for him politically. The ward he is contesting went to the DA in a 94% landslide in the 2016 municipal polls. DM

This story has been updated on 22 October 2021. In the earlier version, Daily Maverick stated that ‘the judge did not make any findings on allegations linking Jacobson’s doxxing of Wagenaar to the arson attack’. Judge Allie in fact said: “There is no objective proof adduced in evidence… that… the publication of Mr W’s contact and vehicle details were the direct cause of his vehicle having been torched”. (see full judgment below). Daily Maverick regrets its incorrect interpretation of this portion of Judge Allie’s ruling and apologises to Mr Jacobson.