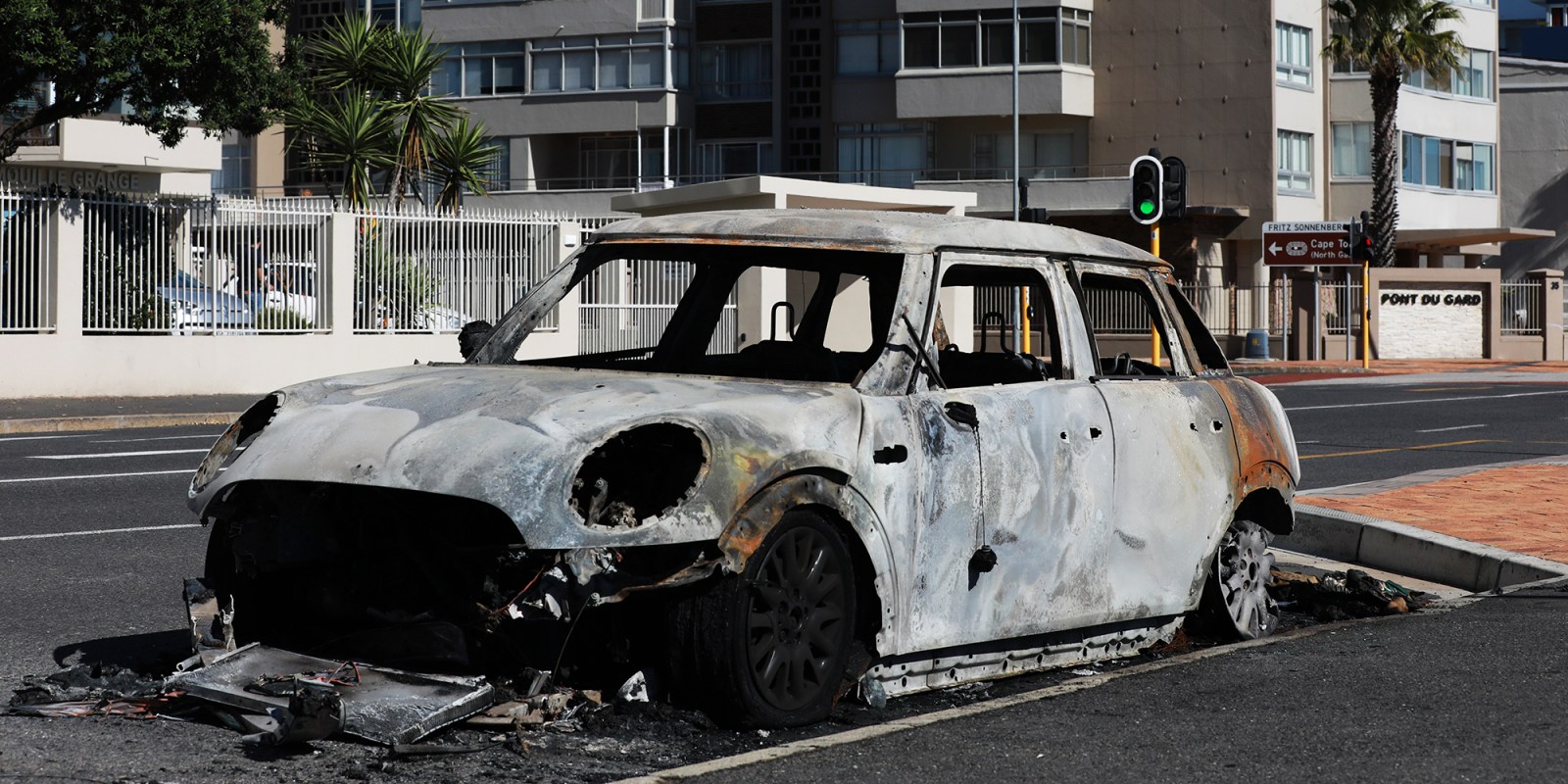 In the early hours of Wednesday morning, Peter Wagenaar woke up to the sounds of his car burning. Wagenaar had been using his car to distribute food to homeless people in Sea Point, which generated ill-feeling among some residents.

One man’s charitable decision to feed the homeless in Sea Point has sparked contentious debates on Sea Point Facebook groups. Now, 41 days since Wagenaar started feeding the homeless from his car, his car has gone up in flames.

“This morning, at 3.40am, I was sleeping and I heard the [car] alarm. I looked out through the window and I said to my wife, ‘Don’t get a fright, our car’s alight. Call the fire department and I’ll go outside.’ Then I carried on with the day. We chatted to the SAPS guys and the fire department [when they arrived]. We came back [inside the house], I had a nice cup of coffee, fired up the gas stove and started cooking,” said Wagenaar.

Wagenaar, a real estate agent, and his wife decided to cook for the homeless people in Sea Point during the lockdown. This has sparked tension in the Cape Town suburb.

“It’s like a mini-war. There are those of us who think that Sea Point is for all and the homeless [people] are part of our community and we must realise that that’s a fact of life and we must learn to live alongside them. Then there are those who are trying very hard to get them removed,” said Shelley Finch, a Sea Point resident.

“This is not allowed. You cannot do what you’re doing here,” the police officer tells Wagenaar while his wife films the incident.

Although many people have applauded Wagenaar for his good deeds, not everyone finds what he is doing commendable.

On Wednesday, 6 May, just over a week after the incident took place, the Western Cape police commissioner, Yolisa Matakata, told the provincial legislature that it was unfortunate that their members don’t understand the regulations.

“We will have to investigate our member; I must say it’s unacceptable,” said Matakata.

Since then, Wagenaar says, “I’ve spoken to the captain at the Sea Point police station, who was a breath of fresh air, who realised that food distribution is important at this time. We’ve put that to bed, and I said that I believe in second chances.”

Wagenaar wakes up every day at 4am to start cooking. Breakfast is given to the homeless people from 7am to 9am on Beach Road and Fritz Sonnenberg Road.

“This morning it was cinnamon and apple-infused oats, then they got a fresh fruit with that.”

Wagenaar says that around 80 to 100 homeless people get breakfast and dinner from him which he buys from his own pocket.

Although many people have applauded Wagenaar for his good deeds, not everyone finds what he is doing commendable.

On one of the Sea Point Facebook community groups, one such person is Paul Jacobson.

“[Wagenaar] is causing the premature death of many street people,” Jacobson posted in the Atlantic Sea Board Action Group.

“When a person parks in a disabled bay or walks his dog, we have been asked to name and shame. If there was ever a situation that deserved name and shame, this is it,” added Jacobson.

Wagenaar, who’s never met Jacobson, says that he has decided to not give Jacobson and those who are against him feeding the poor any attention.

“I chatted with my wife and said that it’s pointless to give someone like that oxygen, they don’t deserve it.  They’re spitting vitriol about me and putting my personal information [on Facebook] and saying that I’m going to cause the premature death of homeless people,” said Wagenaar.

Finch, who was removed from the Sea Point Facebook group for butting heads with Jacobson and others about what should be done about the homeless people in the area, says:

“This is an ongoing issue of a small group of Sea Point residents who are bullying those of us who are trying to support the local community during the crisis.

“It’s this battle that’s been waged across social media because it’s the only place where we can actually talk to each other at the moment.”

So far, the only politician that’s come out condemning the burning of Wagenaar’s car is GOOD’s secretary-general, Brett Herron.

“This is nothing less than an act of vigilantism by a group of residents who do not accept that feeding hungry people who have no shelter and no food is not only lawful but is also an act of ordinary humanity,” said Herron.

Despite all of the cyber-harassment, threats of arrest and the loss of his car, Wagenaar says that they won’t stop feeding the homeless.

“We won’t be deterred. We’ve undertaken to do it for the period of the lockdown, and once Level 4 is lifted and we move to other levels where there is more activity and more people moving around then they can go back to their normal ways… whatever that is,” said Wagenaar. DM