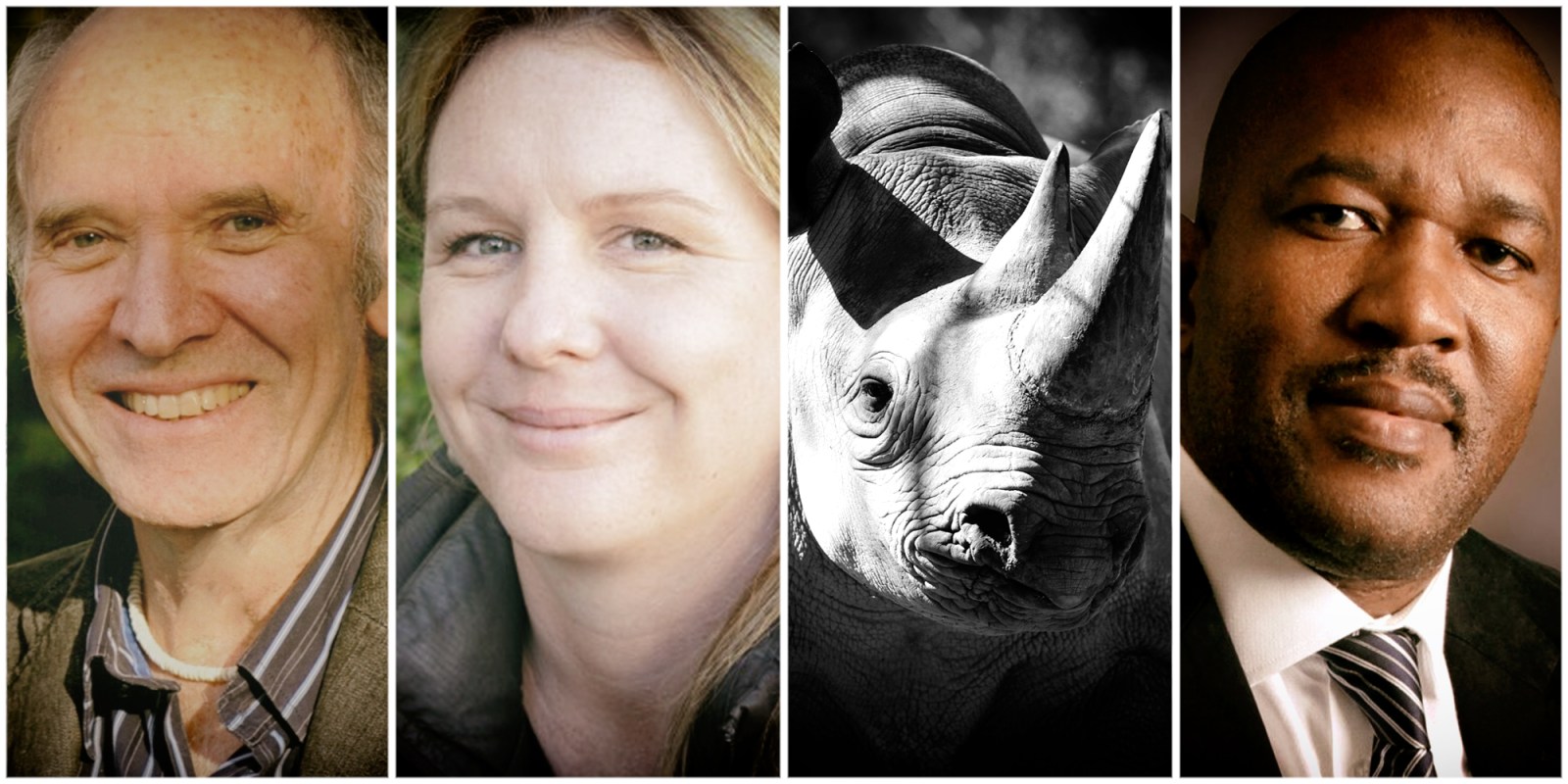 In a Daily Maverick webinar on Wednesday, Dr Luthando Dziba, the acting CEO of South African National Parks, said there may be fewer than 3,000 rhinos in the Kruger Park for the first time – despite the park authority spending millions on rhino protection.

On Wednesday, in conversation with investigative journalist Dr Don Pinnock, Dr Luthando Dziba – the acting CEO of South African National Parks (SANParks) – not only confirmed that the country’s rhino population has declined by nearly two-thirds over the past decade but said that there may now be fewer than 3,000 in the Kruger National Park for the first time.

What, then, is the state of the poaching criminal underworld? Are bent park officials implicated? Can poaching be stopped? Are rhinos on the road to extinction in the wild? What are the solutions? These and other questions were put to Dziba as well as Dr Jo Shaw, the Africa Rhino Lead at WWF South Africa by Pinnock in the webinar hosted by Daily Maverick.

Save The Rhino says the current rhino poaching crisis began in 2008, with increasing numbers of rhino killed for their horn throughout Africa until 2015… “[Poaching] numbers have decreased across the continent since the peak of 1,349 in 2015.”

The organisation says that “South Africa holds the majority of the world’s rhinos and has been the country hit hardest by poaching criminals, with more than 1,000 rhinos killed each year between 2013 and 2017.”

Referring to a graph of rhino poaching in South Africa and Zimbabwe since 1984, Pinnock showed poaching averaged below 200 dead rhinos annually from 1984 to 1994 in Zimbabwe. In South Africa, there were few reports of rhinos being poached from 1994 to 2007, after which poaching exploded to a peak of 1,349 rhinos killed in 2015.

But why were the nineties marked by such low rates of poaching? It was argued that Section 8 of the Fishermen’s Protective Act in the US – also known as the Pelly Amendment – was the cause of the relative dip in poaching numbers observed in the nineties. This authorised the US president to limit the importation of any products from a country whose nationals were engaging in trade that diminishes the effectiveness of international conservation of endangered or threatened species.

It resulted in a universal ban on trade in rhino horn – even in China. With trade loopholes firmly shut and little or no demand for rhino horn, rhino numbers in Africa began increasing.

Then around 2003, mainly Vietnamese cartels found a loophole through legitimate hunting. South Africa was selling over 1,000 legal rhino hunts directly to Vietnamese criminals and East European intermediaries, even using local Asian prostitutes as “hunters”. Crime syndicates now had in their possession around 1,000 legal CITES rhino horn permits which they used to launder poached rhino horn into Asian markets. It kicked off demand in Asia and poaching went through the roof.

Poaching & habitat loss are driving these distinctive creatures to the brink of extinction.

Assam govt burns 2,479 rhino horns in the presence of CM @himantabiswa to bust myths about the usefulness of the horns & prevent poaching.#WorldRhinoDay pic.twitter.com/4dqrTQMnCS

Pinnock said South Africa created loopholes that were exploited by criminal syndicates through licensing of hunting and legalising internal trade, but only shutting down of all rhino horn trade, removing loopholes and stopping mixed messaging – backed up by initiatives like the Pelly Amendment – would bring down poaching.

Dziba said, “I think another way of looking at the alarming stats… is the fact that it is possible to actually do something to basically restore the species but I think it is important to know what needs to be done to basically protect rhino in the wild.”

“We might have created loopholes… in basically legalising hunting and giving permits to international hunters and it is possible, but I think right now within the context of national parks, for instance, there has never been hunting in national parks. We are experiencing the brunt of the scourge of poaching and if you look at Kruger for instance, where our largest white rhino population is at, we experience some of the most severe poaching.”

Asked what the rhino numbers in the Kruger were, Dziba said the rhino population has declined by almost 70% over the past 10 years. “This is … because of relentless poaching. We have officially released the numbers up until the 2019/2020 reporting period where basically we had 3,500 rhino.”

Pressed on what the latest estimate for the total rhino population is, Dziba said they suspect that, possibly for the first time, there were fewer than 3,000 rhino in the Kruger National Park, which was a huge concern.

On a typical day, Dziba explained, there might be three to six incursions into the Kruger National Park detected by their rangers. “Basically every day, rangers are encountering poachers in the bush,” he said.

“If you look just at the quantum of funding we are spending in a place like Kruger National Park, which is well in excess of R200-million on basically ranger services and anti-poaching, one sees that there is a lot of investment that we are making in anti-poaching but it’s still not enough if you look at the number of animals that are poached every year. I mean right now, we are around 200-plus animals as of last year.”

Shaw, who co-authored an article published by Daily Maverick on Wednesday, argued that saving rhinos is a litmus test for tackling organised crime and corruption in South Africa. That article notes that since 2010, 9,885 rhinos have been killed across Africa.

It says poaching in South Africa peaked in 2014 – the worst year on record – at 1,215 incidents. “Last year, 394 rhinos were killed by poachers in South Africa, the lowest figure since 2010, attributed in a large part to Covid-19 lockdowns and travel restrictions. But as restrictions ease, poaching incidents are on the rise and in the first six months of this year, 294 rhinos were poached.”

In the webinar, Shaw said, “Corruption is the oil that smoothes the organised crime networks at every level from inside the park to moving the horn to the airport to exporting the horn at the airport level. There are people on the inside and what is concerning is the level of sophistication at which the people are being entrapped or threatened or pulled into some of these networks. The networks reach all the way across from the park to the export point to the consumer country.”

Asked what is wrong with the justice system in failing to jail an infamous alleged poacher, Shaw said part of the problem is that people still see rhino poaching as the death of a rhino and not as a form of organised syndicated crime. “The fact that the commodity being traded comes from wildlife doesn’t really matter.”

“This needs to be addressed across borders, across agencies as syndicated organised crime and I think that if we were working on it at that level and bringing all the tools to bear so if we start hitting these guys where it hurts using… tracking the financial flows, using asset forfeiture. Perhaps if we recognised the crime as working at that level of severity we might have more impact.” OBP/DM