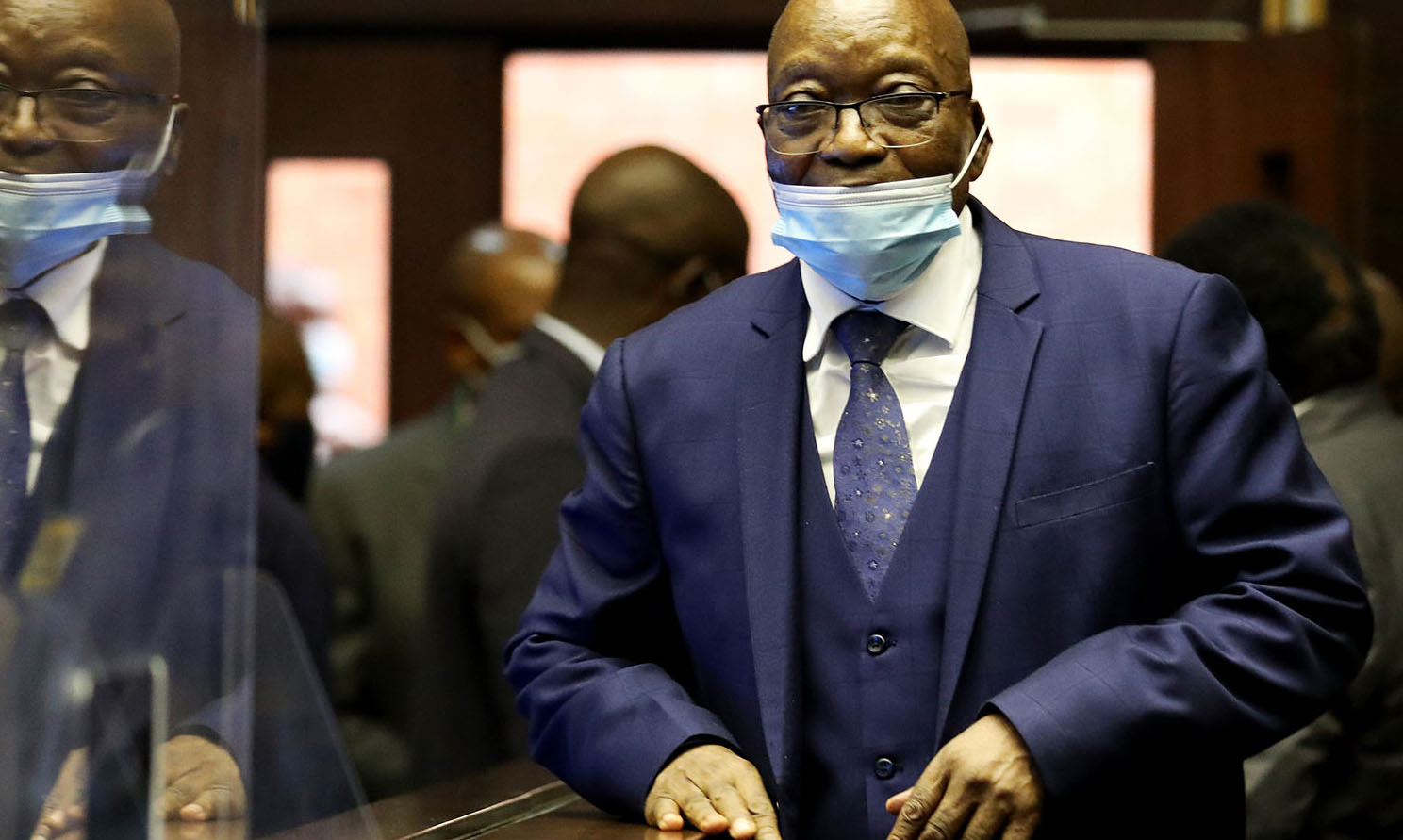 The former president's lawyers claim the release of a medical note from his doctors is an example of prosecutors’ lack of impartiality and grounds for his ultimate acquittal. The NPA says the note was a public document.

The “leaking” by the National Prosecuting Authority (NPA) of a confidential medical note to a journalist, written by Jacob Zuma’s senior team doctor, was “one of the most concerning issues” for the former president, the Pietermaritzburg High Court heard on Wednesday.

According to advocate Dali Mpofu, SC, the embattled former president – who is still serving a prison sentence albeit under the ambit of medical parole – repeatedly raised this point with Mpofu after Tuesday’s court session.

“This was one of the most concerning issues for Mr Zuma. Every time I spoke to him after the case yesterday, he kept on [returning] to this issue, saying on what basis it had been said that his private documents were not confidential,” Mpofu told the court on Wednesday, the final day for Zuma’s application for a special plea to be heard.

Zuma is seeking to have the state’s senior prosecutor, advocate Billy Downer, removed from his arms deal corruption trial (which is technically yet to begin while the special plea continues) in terms of Section 106 (1)(h) of the Criminal Procedure Act, and contends that should he be successful, he will be entitled to an immediate acquittal in terms of Section 106(4).

Or, as Mpofu rather confusingly put it on Wednesday: “If anything, we want this court to remove, rather than Mr Downer per se, his title to prosecute in this matter, or to declare that he lacks the title to prosecute.”

The NPA, represented by advocate Wim Trengove, SC, wants the court to dismiss the special plea.

Zuma has accused Downer of lacking “independence and impartiality” and is therefore unable to conduct a “lawful prosecution” that will uphold his constitutional rights to a fair trial.

The former president did not attend proceedings on Tuesday or Wednesday, with the court being told that his doctors preferred that he stay in Gauteng to be near them.

The 79-year-old’s undisclosed “medical condition” has become a central point in public discourse and the courts, much to Zuma’s chagrin, according to his legal team and eponymous foundation.

Zuma was granted medical parole in early September, having served just two months of a 15-month sentence after being found in contempt by the Constitutional Court.

He had defied that court’s order that he appear before the Zondo Commission, and was serving his time at the Estcourt Correctional Centre in KwaZulu-Natal before reportedly taking ill and being admitted to a Pretoria hospital.

The Democratic Alliance and civil society groups are challenging the medical parole decision in court. The decision to release Zuma was taken by Correctional Services commissioner Arthur Fraser, who overruled the Parole Board’s decision that medical parole was not warranted.

The former president is also involved in a tussle with the NPA, which wants its own doctors to examine him. Zuma says they should take the word of his military medical team. This is to determine if Zuma is fit to attend court proceedings and stand trial in the arms deal matter.

While the state-appointed specialists have not yet examined Zuma, as he has refused to consent to it, they have declared, on the basis of medical reports received from Zuma’s doctors, that he is fit to stand trial.

Trengove, in court on Tuesday, addressed the issue of the medical note that was attached to Downer’s unsigned affidavit, which Zuma’s legal team says was “leaked” by the NPA’s Andrew Breitenbach to a News24 journalist on 9 August.

Trengove said that once the documents were lodged with the court, they became public records. In his supplementary affidavit, Downer had stated that the documents were given to the reporter with an embargo, which she had respected.

Trengove had further told the court on Tuesday that Breitenbach’s conduct was lawful, proper and that he had not “leaked” anything.

“Media were entitled to it, and [Breitenbach] merely facilitated access to it. The criticism of Mr Breitenbach, as if he has now somehow done anything wrong, is quite unfounded,” Trengove had said.

The medical note did not name any specific illness Zuma was suffering from.

The “thrust” of Trengove’s position was that the medical note was not confidential, Mpofu told Judge Piet Koen, adding that that was “just preposterous”.

“The document comes from a medical practitioner, and twice in the document itself it says it is confidential,” Mpofu continued. He said it might also have been that the doctor who had penned the note did not want his name released. There was “criminal intent” in the leaking of the note, he said, and Zuma might decide to lay a charge in this regard.

On 10 August, the court heard that Zuma had suffered an injury late last year that was left untreated due to court appearances and his jailing, which had since become life-threatening and was a medical emergency.

According to the Department of Correctional Services, Zuma underwent “a surgical procedure” on 14 August, with other procedures set to follow.

Nevertheless, without directly saying so, Mpofu intimated on Wednesday that the sharing of the legal note for public consumption was callous and impudent.

“One of the big issues of our Constitution is the values of Ubuntu, or respect… being able to put yourself into somebody else’s shoes. How would you feel if your family members find out from a newspaper report about a condition that poses a significant threat to your life? Really, my lord, some of these things are just too difficult to swallow,” he said to Koen.

The NPA’s attitude, said Mpofu, was one of: “Why is [Zuma] complaining?”

“Mr Zuma takes the strongest exception to what was done with his medical information and how it was treated in this court. But no, we owe Mr Downer an apology, not Mr Zuma.”

With that last sentence, Mpofu was referring to Trengove saying on Tuesday that Downer was owed an apology for the way Mpofu and advocate Thabani Masuku had ripped into him to try to prove that he was unfit to prosecute the former president.

Mpofu also laid into Trengove, denying on Tuesday that a state-appointed medical doctor and the investigating officer in the case had tried to gain access to Zuma to physically examine him, without his consent.

Koen had previously ordered that an examination of Zuma by a state-appointed doctor could take place.

Mpofu told the court on Tuesday that the NPA had misread Koen’s order, and that the examination could only take place once a thorough report had been received from Zuma’s medical team.

Trengove had said there was no suggestion in Koen’s order that the NPA’s doctors should first wait for the medical report.

He further said it was “completely false” that the NPA’s doctor and the investigating officer tried to force Zuma into a physical examination without his consent.

“The state made it clear throughout that despite its interpretation of the court order, that it wouldn’t examine Mr Zuma without his consent, and the state asked for his consent, and Mr Zuma has declined to give consent,” Trengove had said.

Mpofu on Wednesday declared this a “feeble excuse”.

Trengove was involved in obfuscation, he said, adding that the NPA had “insisted” that Zuma be examined “and even threatened us with contempt of court if we didn’t allow the physical examination”.

Mpofu said it was only once Zuma’s legal team had said that Downer and the NPA should “go ahead” with contempt charges, that they “wrote a letter saying they won’t insist [on the examination] without Zuma’s permission”.

“Now that is presented here as if that was the primary position. Now all of these threats of contempt are washed away. They can’t do that.”

Judgment was reserved and the matter postponed to 26 October. DM