Waste not, want not: Western Cape to ban organic waste from landfills, starting with 50% reduction in 2022 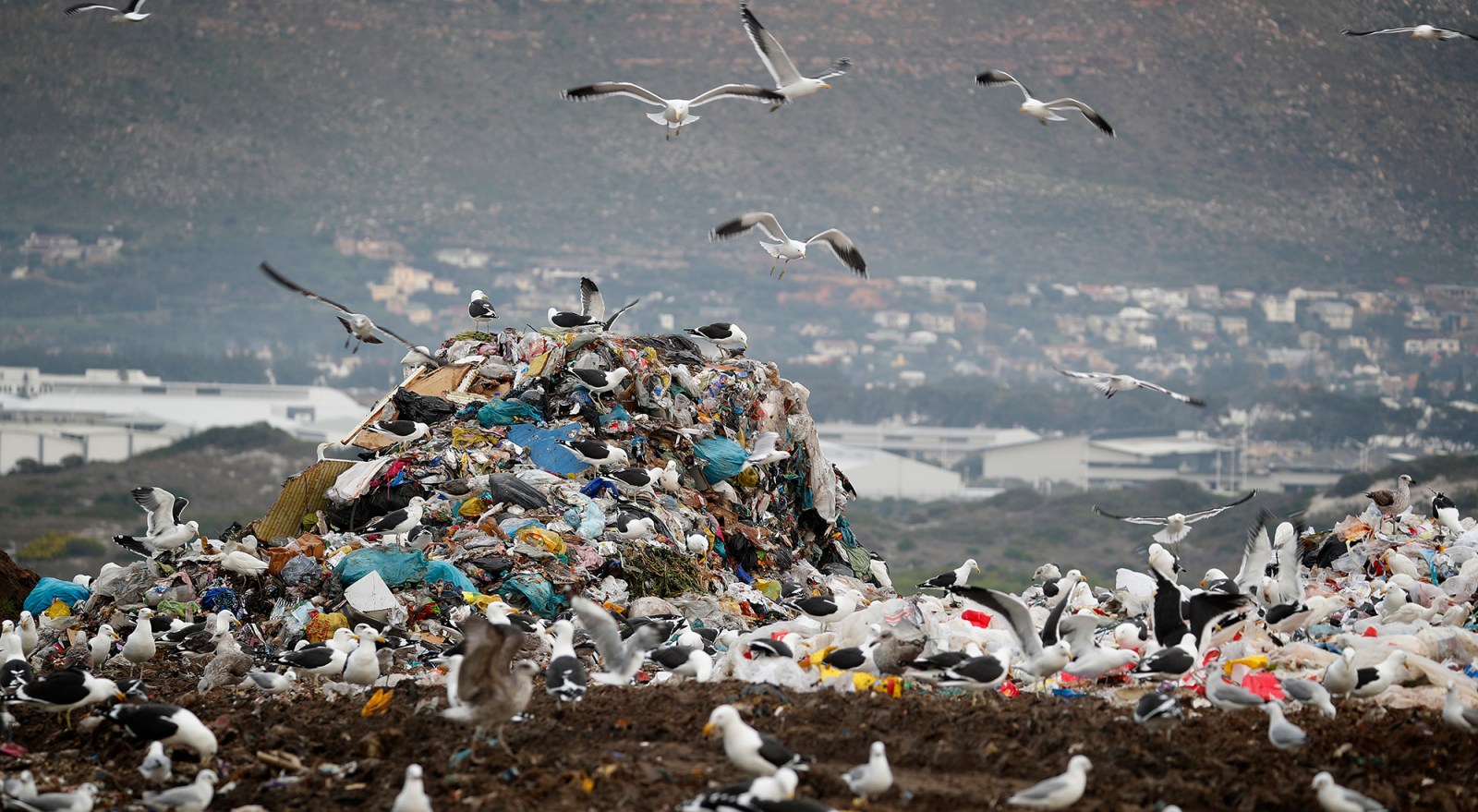 Gulls fly around plastic waste at a landfill site in Cape Town on 30 May 2018. Every year, roughly three million tonnes of organic waste are produced annually in the Western Cape. (Photo: EPA-EFE/Nic Bothma)

Starting next year, the Western Cape Organics Landfill Ban will come into effect, requiring a 50% reduction in the roughly three million tonnes of annual organic waste dumped in the province’s landfills.

Every year, roughly three million tonnes of organic waste are produced annually in the Western Cape. This inevitably ends up in the increasingly full landfills across the province. This waste then lies, compressed under the weight of yet more waste, slowly decomposing and producing methane – a greenhouse gas many times more potent than carbon dioxide.

Organic waste also creates leachate, a pollutant that can run off into local water sources at landfills if not managed properly. The waste includes crop waste, food production waste, and retail, hospitality and wholesale wastes. In the main, anything that is naturally biodegradable is considered organic waste.

According to GreenCape’s 2016 Market Intelligence Report, out of the 7.7 million tonnes of waste produced annually in the Western Cape, 2.9 million tonnes are organic waste.

Enter the Western Cape government and its bold plan to eliminate organic waste from the province’s landfills by 2027. Starting with a 50% reduction next year, the plan was adopted partly in response to the ever-decreasing availability of landfill space.

GroundUp previously reported that the province’s minister of environmental affairs, Anton Bredell, warned in a press release that, “We have a serious waste problem in the Western Cape. We are running out of landfill space.”

Melanie Ludwig, chairperson of the Organics Recycling Association of South Africa (Orasa), told Daily Maverick why she believed that the city’s plans are significant:

“This is a very important development as it will require waste generators to source-separate their organic waste and find other solutions to process it, which will create huge opportunities for business and job creation.

“Organic waste in landfills breaks down anaerobically, producing methane, which is a harmful greenhouse gas and contributes to climate change and also contaminates groundwater.

“By processing organic waste into valuable products, for example, compost and biogas, the nutrients and energy from the waste can be recovered and not lost forever in the landfill. By putting organic material back into the soil plants can actually pull carbon from the atmosphere, capturing it in the soil and reversing climate change.”

The ban is perhaps particularly relevant to those who call the Western Cape home and who feel disempowered and want to do their part in tackling the looming spectre of dangerous climate change.

Ludwig explained that, “In order to be able to effectively recycle organic waste it needs to be source-separated. At a household level this means that food waste, garden waste, some paper products and compostable packaging will need to be separated in the kitchen so that it can be collected separately from general waste and dry recycling (plastic, paper, glass and metals). Offices and factories will also need to separate organic waste, so food waste will need to go in a separate bin.

“A big behaviour change will be required to ensure that the organic waste is uncontaminated so that it can be processed into a valuable product. There may be additional costs for effective source-separated waste collection.

“Our landfills are quickly filling up; we will all care a lot when there is just nowhere for our waste to go and it starts piling up on the streets. Some landfills have only a few years left – Stellenbosch’s landfill is already closed,” she said.

Ludwig says the move is a step in the right direction and that the ban “will have a positive effect on the organics recycling industry in the Western Cape – increasing the demand for the collection and processing of organic waste and producing valuable compost for sustainable agriculture and biogas for sustainable energy.”

Daily Maverick reached out to Eddie Hanekom, the director of Waste Management in the Department of Environmental Affairs and Development Planning in the Western Cape to better understand the plan and raise Orasa’s concerns. He directed questions to Rudolf van Jaarsveldt, head of Communication Services in the same department.

Van Jaarsveldt explained that the plan for the ban was initiated “in an effort to protect limited available landfill airspace in the Western Cape and it will also move towards achieving global climate targets.

“The ban will help to reduce the environmental impacts of this waste type, including reducing greenhouse gases. [It will] encourage the beneficiation of organic waste as a resource, which will promote the waste economy, stimulate job creation and ensure the improved uptake of waste management beneficiation technology.”

Ludwig cautioned, however, that Orasa is “concerned that municipalities that manage our waste have not engaged with industry to assist them with putting systems in place to access this waste or process it in a cost-effective manner.

“No specific organic waste diversion plans have been made public; other types of waste minimisation plans done by high level consultants lack the practical details to assist municipal waste managers to implement on the ground.”

Van Jaarsveldt explained that, “Targets are always set to be aspirational; we are currently at 34% diversion of this waste type and several turnkey activities took place such as the formulation of Orasa, which now has a national footprint, [and] publishing of national norms and standards to fast-track the beneficiation of this waste type.

“The department also ensured that the diversion of this waste type was put on the national agenda.” DM/OBP

Waste not, want not: Western Cape to ban organic waste from landfills, starting with 50% reduction in 2022