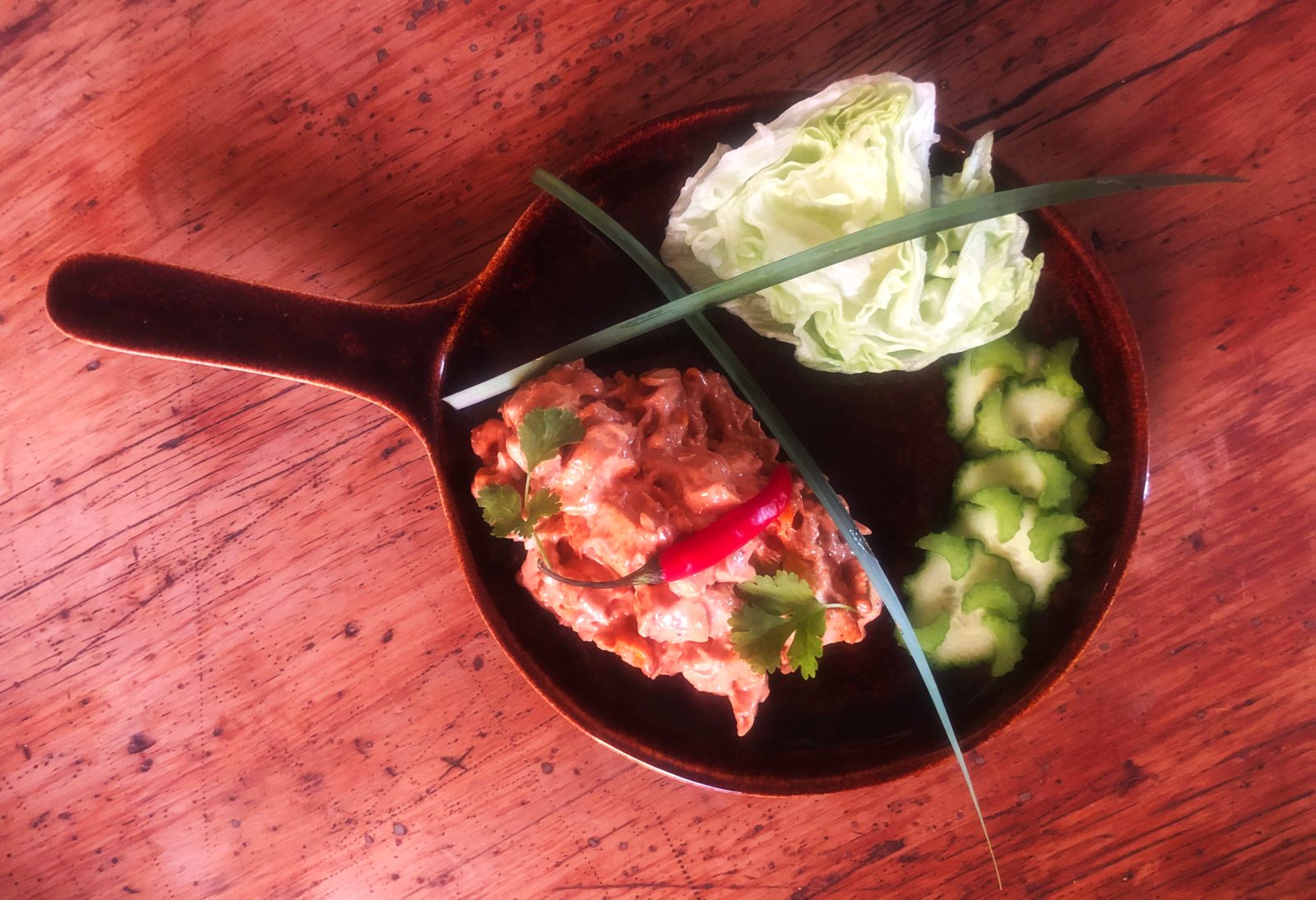 When you cook for Queen Elizabeth II, you go lightly on the spices, as she is famously timid of palate. Surprising, then, that the dish most famously associated with her majesty is a curried salad.

The spicing of the original dish for Queen Elizabeth’s coronation luncheon in London’s Guildhall on the 12th of June 1953 must have been very light. When cooking one meal for many guests the wise host caters for the broader palate, but when cooking for the queen you are really cooking for her palate alone. It is well known that if you’re dining in her company, you eat what she eats and the way she likes it. There is no tradition of “this one’s for Her Majesty, the others all have garlic and more spice”. In fact, there will be no garlic in anything at all. It is ingredient-non-grata in her palace kitchens.

If you want to please the queen, you might cook her a nice lunch of grilled chicken with a simple salad, or a piece of Dover sole grilled and served with plain wilted spinach or courgettes. Darren McGrady, who worked for years in the royal households, wrote in his book Eating Royally: Recipes and Remembrances from a Palace Kitchen that Her Majesty loved potted Morecambe Bay shrimp on hot buttered toast, and fish and chips on a Friday. Her idea of extravagance was more in the vein of roast partridge, pheasant or grouse for Sunday lunch, and she loves venison, but never rare, and fancies a mushroom, whiskey and cream sauce with her well-done meat. So it would be unkind to presume that, because her palate is not adventurous as such, she does not appreciate fine fare. Some of those are very fine indeed.

But she’s no foodie, as McGrady has said; unlike her late husband Prince Phillip, she eats to live, he lived to eat. And never, ever garlic.

So then. Her Maj and I are not quite on the same page of the recipe book regarding spices and garlic. I do admire her, however, so I hope she will forgive me if my recipe wanders away a tad from the original one that Constance Spry and Rosemary Hume created for the Guildhall lunch in June 1953, two years before yours truly arrived on the planet screaming for milk and garlic with a hint of masala.

But we’re not actually cooking our Coronation Chicken for a coronation, or for her royal highness. We’re cooking it for us commoners, out here on the wrong side of the Buckingham Palace gates, where we peer in wondering what it must be like inside, and what she’d say if you hopped over, walked up to her and yelled “Hello!” while her minders bundled you into a van and took you away. Followed, in short shrift, by the tabloids sharpening their pens and you selling your story to Hello! magazine. Sorry, I got a bit carried away there.

What else goes into it? Let’s start with Spry and Hume’s original recipe. Other than chicken and mayonnaise, it contained curry paste, tomato purée, red wine, onion, apricot halves, bay leaf, lemon juice, and cream.

I approached the recipe with a background of the cuisine and spices of the Cape, so my first thought was to use dried apricots, and the second was to add golden sultanas. This is because I think the dish benefits by having more of the sweet fruitiness that they both bring, and the texture of the sultanas in particular is pleasing. Apricots are essential, although some recipes for it leave them out, which is a shame; if you’re moving that far away from the original it ceases to be Coronation Chicken at all. We can add to it rather than subtract from it; that’s the key. For the spicing, I went straight to my Durban Curry masala mix, because it would seem curlish to leave the old Natal colony out.

Another change in my recipe is the addition of chutney. It seems obvious to me that chutney is the perfect way to complete the flavour profile of Coronation Chicken. It underscores the sweetness by balancing it with sour, and enhances the spices just as it does when served with a hot curry.

But there’s one element of the original that I left out: cream. I chose instead to go heavier on the mayonnaise, so it doesn’t really become a lighter dish as such, but I can’t say cream does anything more than increase the richness of a dish that is already rich enough. Add cream by all means, but I liked the flavour and texture of the dish as written here; let me know what you think.

Finally, the meat needs simply to be cooked chicken, so leftover breast meat from a roast is perfect. I planned it this way: I bought a really plump chicken and roasted it, then served us the thighs, drumsticks and wings for supper and kept the two breasts in the fridge overnight. That was the perfect quantity for Coronation Chicken.

The recipe is made in two stages. First, onion is simmered in oil until softened, then spices, bay leaf, tomato purée and red wine are added for it to saute until the liquid has reduced. Then it is cooled before mayonnaise and other ingredients are stirred in.

Simmer chopped onion with the bay leaf in cooking oil until softened but not caramelised. Add the chilli, masala, tomato purée and red wine and simmer until much of the liquid has cooked away.

Leave it to cool, then stir in the chutney, tiny pieces of dried apricot, sultanas, and mayonnaise, and season with salt and pepper to taste. Finally, add the chicken and fold in with a wooden spoon until everything is coated in the sauce. Serve with a simple green salad, and no garlic please. Let’s give Her Majesty that much. DM/TGIFood