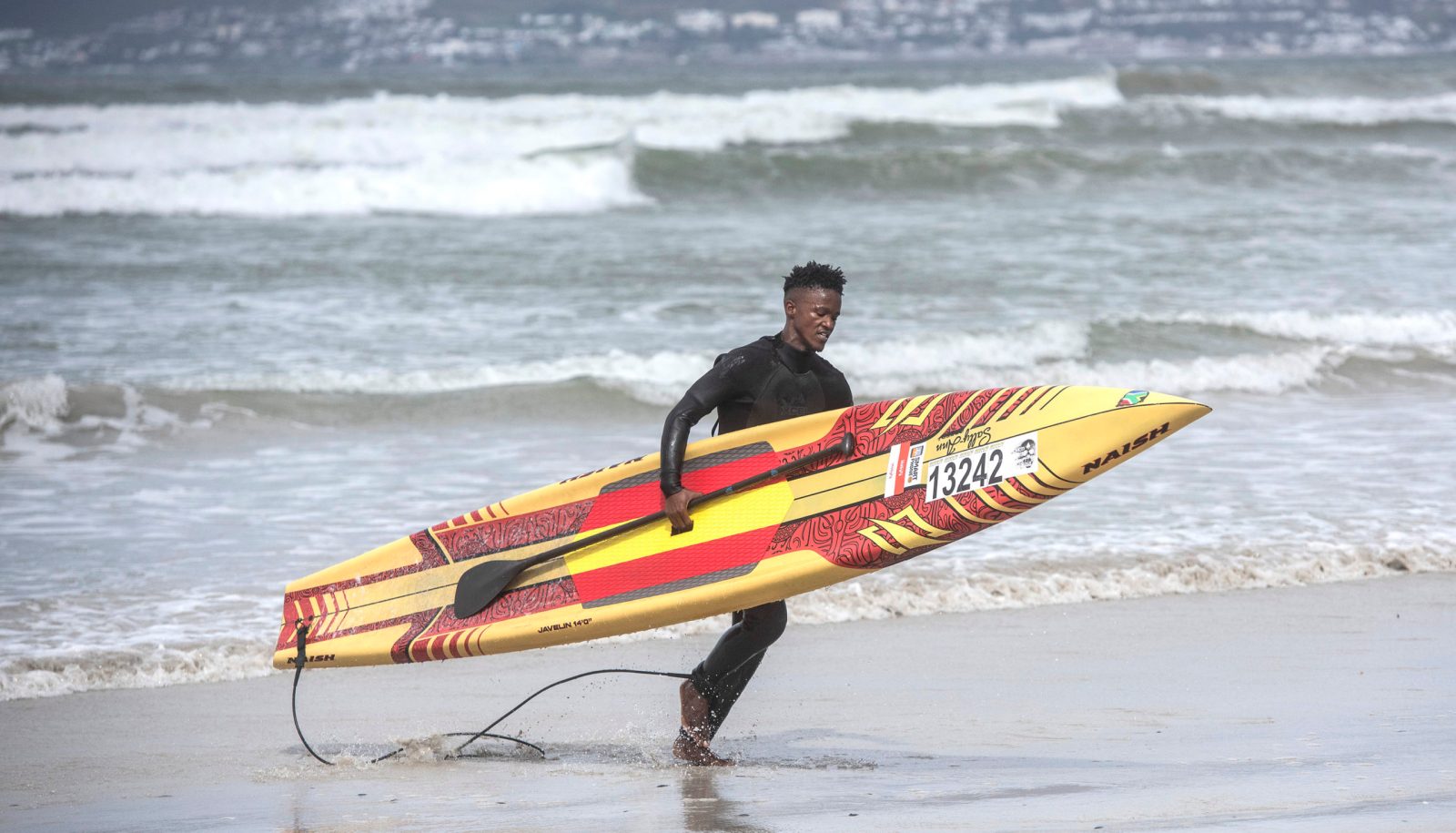 Sinda training hard running out of the sea with his 14 ft paddle board during his lunch break at Muizenberg corner . picture Brenton Geach

Ten years ago, a 15-year-old black boy from Khayelitsha stood at the shores of Monwabisi beach, reluctant to learn how to surf.

Now 25, Sinda Thakathani will take to the water in Hungary at the International Canoe Federation Stand Up Paddling World Championships. By so doing, he will be the first black South African to represent the country in the competition, which runs between 9 and 12 September.

“To be quite honest, if it wasn’t for my friends pressuring me to stay, I would’ve left and never bothered to learn. I was terrified of the ocean and you know in the townships, we always think, ‘What if there’s a shark in there?’” said Thakathani.

Waves For Change, which introduces surf therapy to underprivileged children, had come to Khayelitsha to speak to school kids about turning away from violence and drugs, and surfing instead.

At the time, like his peers, Thakathani was often “hanging around at the corner” and fighting, “because there was nothing else to do”.

Apish Tshetsha from Waves For Change told Daily Maverick that seeing Thakathani compete in an international competition “will be a huge inspiration for any young kid from the township.

“You know how difficult it is for townships kids; there’s lots of drugs and violence, but Thakathani showed a passion for the ocean from the get-go. He’s been committed to the sport and I feel so proud of him for getting this far,” said Tshetsha.

Thinking back to those early days of learning how to surf, Thakathani said it took him about a week to get the hang of standing while on the board.

“That feeling is absolutely amazing, it’s something else. And I thought, ‘You know what? I love this and I’m going to stick with it.’ Ever since then I’ve been surfing,” said Thakathani.

After finishing high school, Thakathani did lifeguard courses with Lifesaving South Africa and qualified as a lifeguard in 2016.

In 2017, he started working at a surfing shop in Muizenberg, where he spent most of his time teaching people how to surf, rather than surfing.

But in 2019 Thakathani decided to enter more surfing and stand-up paddling competitions. That year, Thakathani was ranked third in the country by Stand-Up Paddling South Africa (Supsa).

The following year, Covid-19 upended everything. “I lost interest in training because there weren’t any competitions to look forward to. I told myself if there are competitions in 2021, then I’ll start training,” said Thakathani.

But three months into 2021 Thakathani was hit by two cars in Khayelitsha.

“There isn’t enough space for pedestrians to walk because vendors take up space on the pavements and some houses are built quite close to the road. So you often have to look back to see if there’s a car coming.

“I didn’t see the car. When I looked back, it hit me, I flew up in the air, and then landed on the road. I fell on my right side, I saw the other car coming. The second car drove over me and stopped on top of me and then I passed out,” said Thakathani.

“The doctors said that the only reason I woke up was because the oil tank was right on top of me and as a result, I got a huge burn on my back. The oil tank was burning my back. They had to lift the car up and pull me out. After that, I remember waking up in the hospital.”

Thakathani said that he’d only suffered the burn marks and a broken wrist. The accident left him with “a huge scar” on his back and scars on the left side of his face.

But a few weeks later, Thakathani was back on his board, training for the Freedom Paddle which happens every year on 27 April, which is when South Africa celebrates Freedom Day.

Thakathani came third in the competition. “It wasn’t first place, but I was so stoked at coming in third place.”

From there he made it to South Africa’s national stand-up paddling team, which saw him headed to Hungary.

But getting to Hungary meant that Thakathani has had to overcome many obstacles.

When taxi violence disrupted his ability to get to Muizenberg, where he works, and trains for stand-up paddling, Thakathani had to stay with a friend in Simon’s Town.

“I have the kind of challenges that many stand-up paddlers don’t have. They have easy access to the beaches, they’ve had access their whole lives. They’re able to afford all the top-gear equipment and they do it full-time,” said Thakathani.

For the past few months, he has been training twice a day during the week.

“I surf and do my stand-up paddling in the morning, then I either jog or go to the gym when I get home… it’s not easy.”

Craig Wilson, a digital marketer, has been helping Thakathani with his social media. “I said to him, ‘If you want to take [stand-up paddling] professionally, you’re going to have to clean up your social media,’ ” said Wilson.

Wilson took pictures of Thakathani catching waves and teaching people how to surf. “I’ve watched him train for the World Championships and he’s worked really hard.”

Thakathani is both excited and nervous about the World Championships and is the first black person to represent Supsa.

“Being the first black person to do anything is nerve-wracking. Everyone you’re competing with is thinking, ‘Damn, then this guy must be good’, but they don’t know that I work full-time; I’m not a full-time stand-up paddler [like them],” said Thakathani.

Caroline Gill, Supsa’s secretary, confirmed to Daily Maverick that “Thakathani is currently the only black male stand-up paddler known to Supsa who is sufficiently trained to be able to compete internationally.”

“Due to the massive costs involved in international competition, we have only ever had a handful of paddlers who managed to self-fund or raise their own sponsorships to be able to travel and compete in the international arena,” said Gill.

Thakathani was able to raise R32,850 to go to Hungary. Gill said, “There is no money available to us from the Department of Sport [Arts and Culture] for international competitions.”

Daily Maverick asked the Department of Sport, Arts and Culture whether it had funded any stand-up paddlers and for how much. The department’s spokesperson, Masechaba Khumalo, did not respond to the questions.

Although Thakathani feels pressure to do well because he’s the first black stand-up paddler to represent Supsa, he’s pleased that his love for the water is taking him abroad.

“I never would’ve thought being in the ocean would take me this far. All I know is that the ocean is a form of therapy for me. When I’m on that board, I’m thinking about which wave I’m going to catch and which trick I’m going to do next,” he said. DM