More than 1,300 healthcare workers in South Africa have died of Covid-19 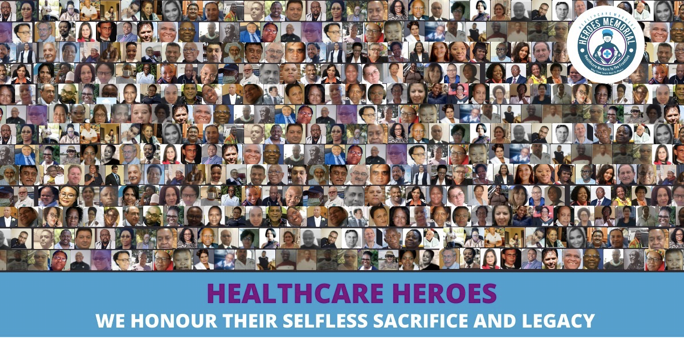 Apart from the painful personal tragedy represented by each death, the loss of at least 1,300 health workers to Covid-19 is a serious blow to SA’s health system. Vaccinations are proving a huge benefit, but a plan to fill the gaps left by the deaths is nowhere to be found.

In August 2020, Maverick Citizen reported that 181 healthcare workers (HCWs) had died because of Covid-19. We called on society to recognise their sacrifice and emulate their values. By last week, according to the Department of Health Deputy Director-General, Anban Pillay, that number had risen to 1,297. Further tragic losses were recorded over the weekend.

Data on HCW deaths is collated from DatCov, an advanced surveillance system created by the National Institute for Communicable Diseases (NICD) that collects Covid-related data from 668 hospitals — 441 in the public sector and 257 in the private sector.

According to Dr Waasila Jassat, from the Division of Public Health Surveillance at the NICD, the DatCov system classifies healthcare workers as “people who have an exposure in a healthcare setting” and includes porters, nurses, doctors, surgeons and specialists.

However, Jassat says, the total number of HCW deaths may be a significant underestimate because it is based on self-reporting by hospitals of deaths (often on paper-based systems) that may not always include information about a deceased person’s profession. To get complete accuracy would require linking the DatCov with systems like Persal (the Personal and Salary System used for the administration of the public sector payroll).

Professor Shabir Madhi, a leading vaccinologist, agreed, saying the actual number of health worker deaths could be twice that figure.

Dr Nicholas Crisp, the acting director of the national Department of Health, said DatCov is the only source of information used by the department, but was “difficult to work with because of extended definitions”.

But keeping these caveats in mind, the data are still shocking. Think of it this way: it’s the equivalent of half the staff of Chris Hani Baragwanath Hospital, the largest hospital in the Southern Hemisphere.

Breaking the data down

The Weekly Update on Hospitalized HCWs is a report that is based on data that has been collected by DatCov and is compiled by the National Institute for Occupational Health. By 14 August it had recorded 1,136 deaths.

The report states that by that date:

According to Dr Maggie Mojapelo, who runs the Healthcare Worker Heroes Memorial, the deaths include at least 20 professors of medicine, a huge loss to South Africa’s teaching capacity and medical memory.

The impact and meaning of these numbers also become evident when they are broken down by province.

A total of 330 healthcare workers have died in the Eastern Cape, according to the 4 September Daily Epidemiological Report of the EC health department. The province’s case fatality rate for HCWs is a high 2.6%, with Nelson Mandela Bay losing 73 of its HCWs.

In the Western Cape, Simon Kaye from the health department reported that by 3 September, “Staff deaths totalled 181, of which three were doctors, 81 nursing staff and 107 other staff categories.” Kaye pointed out these figures were only for the public sector.

According to Kwara Kekana, spokesperson for Gauteng health, 105 public sector HCWs have died, but the department does not know in what categories. Kekana said the province’s plan was to replace these losses through, “​​The normal attrition management through advertisement of the posts and following normal recruitment processes.”

Jassat’s analysis of the DatGov data points to interesting and worrying risk factors. She says: “Factors associated with in-hospital Covid-19 mortality among HCWs included age 40 years and older compared to <40 years, male sex, black and Indian race compared to white race, the presence of comorbidities, and being admitted in Eastern Cape, Limpopo and Northern Cape.” It is interesting that she also reports, “less risk of mortality among those admitted in the public sector”.

Jassat also noted that, “The number of Covid-19 admissions in HCWs compared to non-HCWs was proportionally highest in the first wave, decreased in the second wave and was lowest in the third wave. The number of Covid-19 in-hospital deaths in HCWs compared to non-HCWs was similar in the first and second waves, and lower in the third wave. In-hospital case fatality rate was higher among non-HCWs than HCWs, and increased among HCWs towards the peak of each wave, similar to non-HCWs.”

Although not expressly stated (yet), this points to the positive impact of Covid-19 vaccination in reducing both hospital admissions and deaths.

Unlike in the first and second waves of Covid-19 where healthcare workers could rely only on personal protective equipment (if they got it and if it was of decent quality) and other non-pharmaceutical interventions, between February and May this year, 477,234 HCWs were vaccinated through the Sisonke vaccination programme.

Unfortunately, the DatCov system does not yet triangulate information with the EVDS system, so it is not yet possible to show exactly what impact the vaccination programme has had on healthcare worker mortality.

However, in an update report presented by professors Glenda Gray and Linda-Gail Bekker last month, a dramatic drop in deaths of health workers who had been vaccinated was shown. Protection against death was recorded at 91-96%, with protection against both the Delta and Beta variants of Covid. Similarly, according to a 7 July report by Sisonke, “Consistently we are finding that 94% of breakthrough infections are mild, 4% are moderate and only 2% severe.”

The loss of so many health workers is a serious blow to South Africa’s health system.

Mojapelo, whose Healthcare Worker Heroes (see their website here) has set up a trust to support funding the education of children of deceased HCWs, calls it a “professorial apocalypse”, referring not only to the loss of those in teaching, but the institutional memory and lived experience shared by those who teach one another through practice on the frontlines of care. 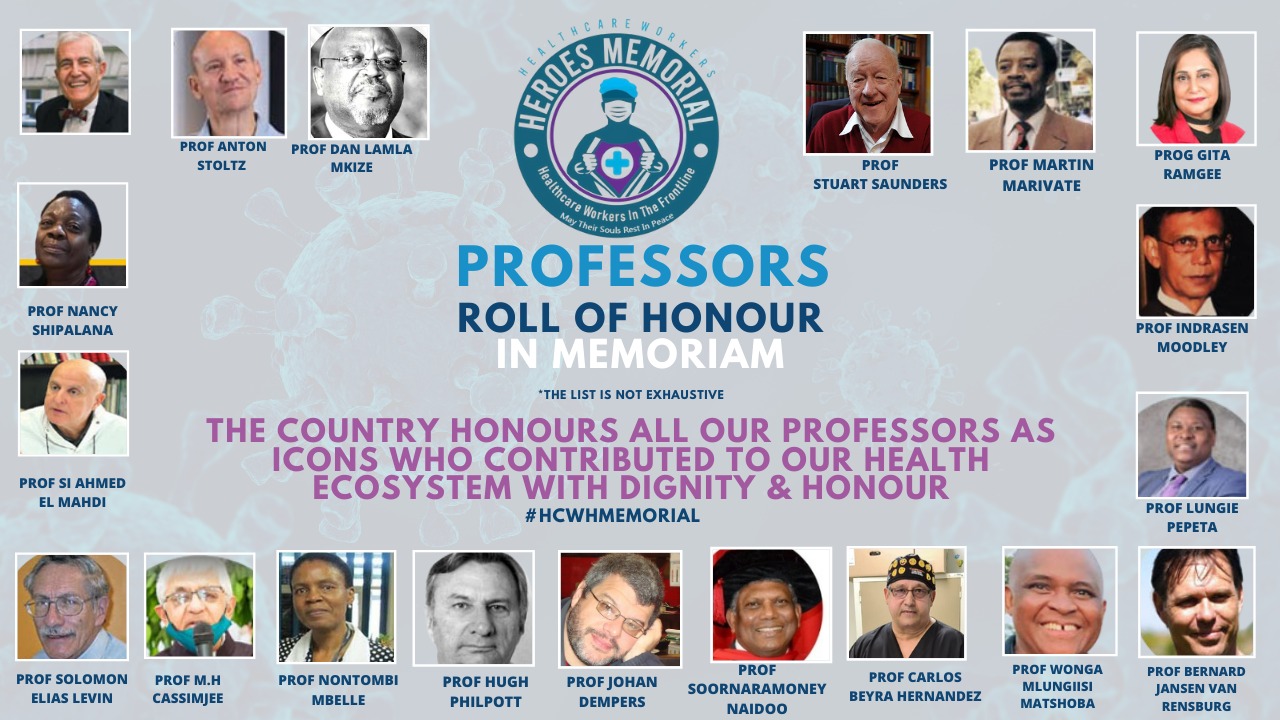 Mojapelo knows from personal experience the cost and the loss. She spent weeks in high care with Covid-19 and recently lost her younger sister, Cecilia, also a doctor. Mojapelo says of her experience:

“When I fiercely fought Covid for  36 days I saw them in action saving our lives — it was like mission impossible — HCWs from cleaners, porters, nurses, physios, doctors and you name them. I also traversed the painful journey of my colleagues who unfortunately did not make it back.”

Several thousand HCW deaths also exacerbates perilous existing health worker shortages at a time when the need for healthcare services is rising. In addition, a great deal has to be done to recover lost ground with other communicable and non-communicable diseases. For example, recent reports by TAC/Ritshidze looking at the state of provincial healthcare services have consistently pointed to shortages of healthcare workers and the impact this has on quality of care.

Finally, the South African Depression and Anxiety Group warns that Covid-19 has taken a severe toll on the mental health of healthcare workers and that without strategies to support them, for many the stress and witnessing of the Covid-19 pandemic may prove too much to stay in the system.

This haemorrhage draws attention to the importance of the government’s 2030 Human Resources for Health Strategy*, which was approved by the National Health Council in October 2020. That comprehensive and carefully researched plan noted that:

“Significant additional investments in the health workforce will be required to improve health service access, quality and equity”, and that, “Improving inter-provincial equity in the public sector by 2025 will require an additional 97,000 health workers, with community health workers (CHWs) comprising around one-third.”

Recently Minister of Health Joe Phaahla told Maverick Citizen that, “We would want to make sure that [the strategy] is implemented, but at the same time we want to be realistic about the variety of challenges around health human resources.”

However, according to one of the experts involved in drafting the strategy, there seems to be no political will to implement it. It has no budget and has not even been presented to the National Treasury. As a result, there has been next to no action on it.

The loss of so many healthcare workers to the system is a mortal blow. One of the best things the government could do to recognise their lives and legacy would be to urgently implement a plan to replace them. We live in hope. DM/MC

*Unfortunately, this plan cannot be found on the Department of Health website, but can be obtained from the Spotlight website if you look for it on Google.