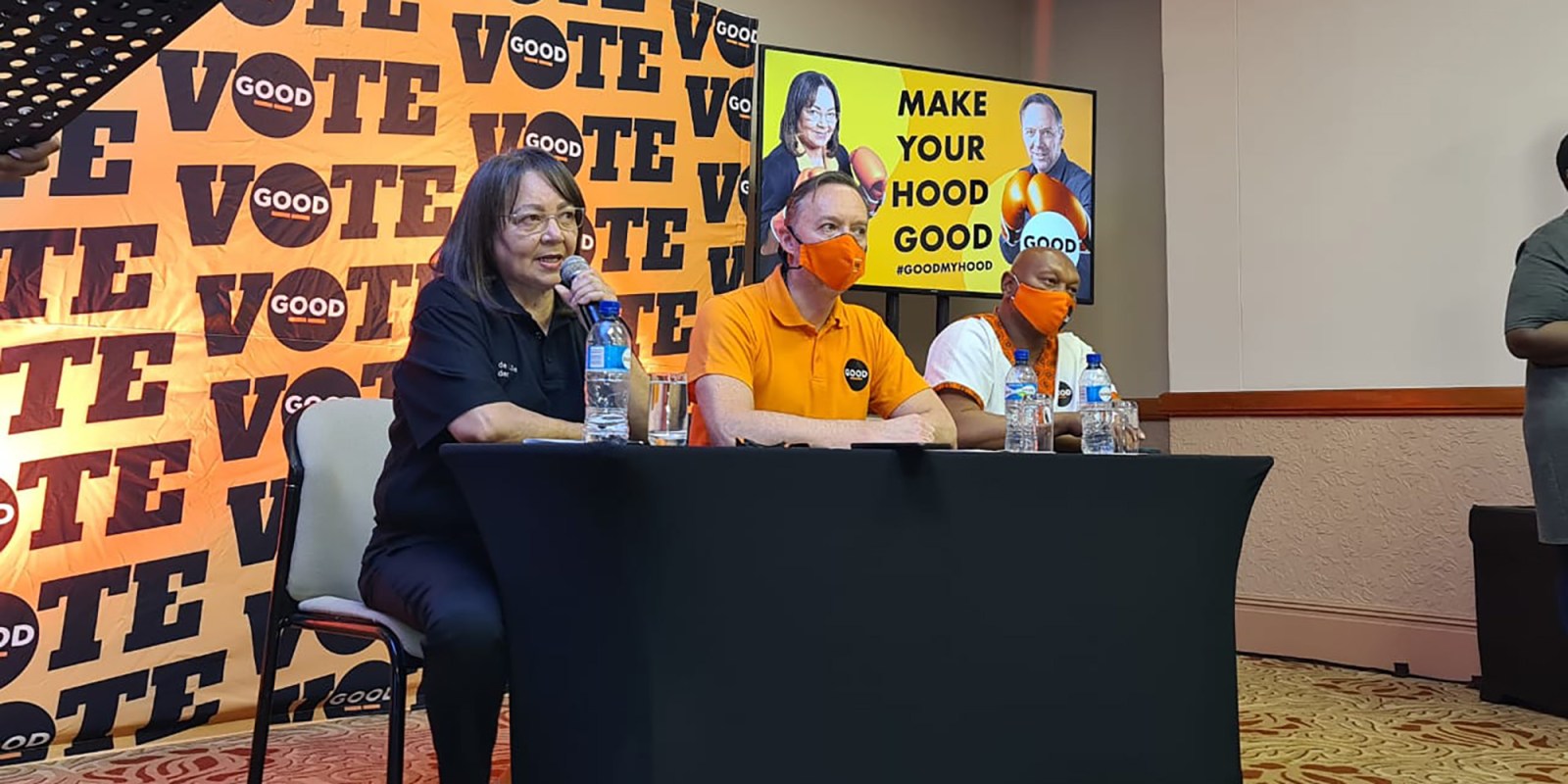 Good is a fledgling party whose mission is to convince people who have never voted, or are tired of voting, to ‘try a new party that really cares’, says party secretary-general Brett Herron.

The Good party will contest 1,000 wards in 45 municipalities across five provinces, including six metros, in the upcoming local elections, said the party’s secretary-general, Brett Herron.

Herron, speaking via Zoom from the party’s campaign office in Goodwood, Cape Town, said the party — not yet three years old — expected to make “some inroads” in these wards.

The goal was to “demonstrate that we are a growing party and that we’re a new party — and not just be labelled as a small party,” said Heron.

This is Good’s second election, but its first municipal poll. The party was formed in December 2018 with several former DA members including Herron and former Cape Town mayor Patricia de Lille in leadership roles, after a particularly nasty split from the DA.

The party has drafted its manifesto:

In February 2019, just three months before the April national and provincial elections, Good launched its election campaign. The party garnered 70,408 ( 0.40 %) votes nationally. This ensured two seats in the National Assembly, taken up by de Lille and Shaun August. De Lille was also appointed Minister of Public Works and Infrastructure, an unusual move since not many opposition politicians make it into the ANC-dominated Cabinet.

In the Western Cape, the party secured 47,283 or 2.24 % of the votes, enough to secure a seat for Herron in the provincial legislature.

Herron left the DA after the often public spats between the party and de Lille. A long-standing ally of de Lille, Herron quit as MEC for transport in the City of Cape Town and as a DA member the day after de Lille’s October 2018 resignation as Cape Town mayor and DA member.

Herron was at de Lille’s side when she launched Good.

Electioneering during a pandemic

The municipal poll is being held in less than optimum conditions.

Held every five years, the 2021 local government elections were due to take place on 27 October. Then in May, the Independent Electoral Commission (IEC) announced former Deputy Chief Justice Dikgang Moseneke would lead a panel to determine whether conditions were conducive for free and fair elections, given the Covid-19 pandemic. In July, Moseneke and his panel found it was “not reasonably possible” that the polls would be free and fair. The panel recommended the elections be postponed until the end of February 2022. The IEC then approached the Constitutional Court in the hope of getting a postponement based on the Moseneke report.

However, last Friday the apex court ruled that elections could not be postponed to 2022, and needed to be held between 27 October and 1 November this year.

At the time of the IEC’s court application, Good had been working on the assumption that elections would go ahead at the end of October.

“Obviously Covid has restricted our ability to persuade voters that Good is new and is different, and is here to do things differently,” said Herron.

Campaigning has also changed — in the previous election cycle, large groups could go canvassing and public rallies could be held. This year it’s different.

“But we still need to reach voters, so we’re still knocking on doors, working in smaller groups and pairs… we’re using the technology that we can… social media, Zoom meetings…”

The party launched Herron’s Cape Town mayoral campaign via Facebook. He said “the viewership was phenomenal”.

Good is also using social media to connect with voters, particularly young people. The party launched a Snapchat account that reached about 100,000 people who engaged with their content. “We’re happy with that.”

But with the uncertainty of when an election will take place, funding also gets affected. In an economy that is “not bountiful”, Herron said this makes it “very difficult to persuade voters, to engage with voters”.

‘We’ve put candidates who are ready to govern’

Apart from Herron announcing that he is Good’s candidate for mayor of Cape Town, the party has not yet revealed its other candidates.

“Some are known to the general public; some will be well-known to certain communities; some are household names because they are on television,” he said.

“I think that in all municipalities, we’ve put candidates who are ready to govern,” said Herron.

At the time of the interview with Daily Maverick, Herron said the party was working with the IEC to sort out a few wrinkles, such as a candidate who had appeared on both the Good and another party’s lists. He admitted the process had been “frustrating” at times, especially with the “confusion” brought on by the IEC with not only the uncertainty of the election date itself, but by technical issues surrounding candidate registration.

The party’s selection process started as far back as July 2020, said Herron. Candidates were tasked with providing a “portfolio of evidence” which showed their connections to their communities. “This would demonstrate to us that they were embedded in their communities and serving their communities.”

Herron said the party was “looking for evidence of a connection between the candidate and service… we were looking for servant leadership rather than leaders who were looking to be served.”

Good wanted a diverse group that could represent their communities: there is diversity in age, sexual and gender representation and those who are differently abled. The party did not have quotas for diversity, said Herron, but “we were sensitive to making sure that when we presented a list of both proportional representation councillors and ward councillor candidates, that our voters could see themselves reflected in those lists, either because they were young and exciting… people who are differently abled. They were people who identify as gay or lesbian or LGBTQI and that the racial diversity was there”.

“We have to get out there and convince people who’ve never gone to the polls — who are tired of voting and seeing no change — to try a new party, one that really cares,” said Herron.

“I’ve been out on the streets for years engaging with people and people are disillusioned, tired of politicians… their lives haven’t changed, whether you live in an empty municipality or this amazing city of Cape Town with the DA being in government for 15 years.

“Life for people on the Cape Flats and the townships hasn’t changed… the parks are still broken like they were 20 years ago, the streets are not really maintained… I mean, there are more potholes in the roads.”

Herron concluded: “Just give us this shot for three years. If we haven’t changed the soul of government so that it matches the soul of our city, our towns, then in 2024 you can take your vote away.” DM

This interview forms part of Daily Maverick’s Road to Local Elections coverage in the build-up to the polls.