Residency in limbo: Living in hope of the stamp of approval from South Africa’s Home Affairs 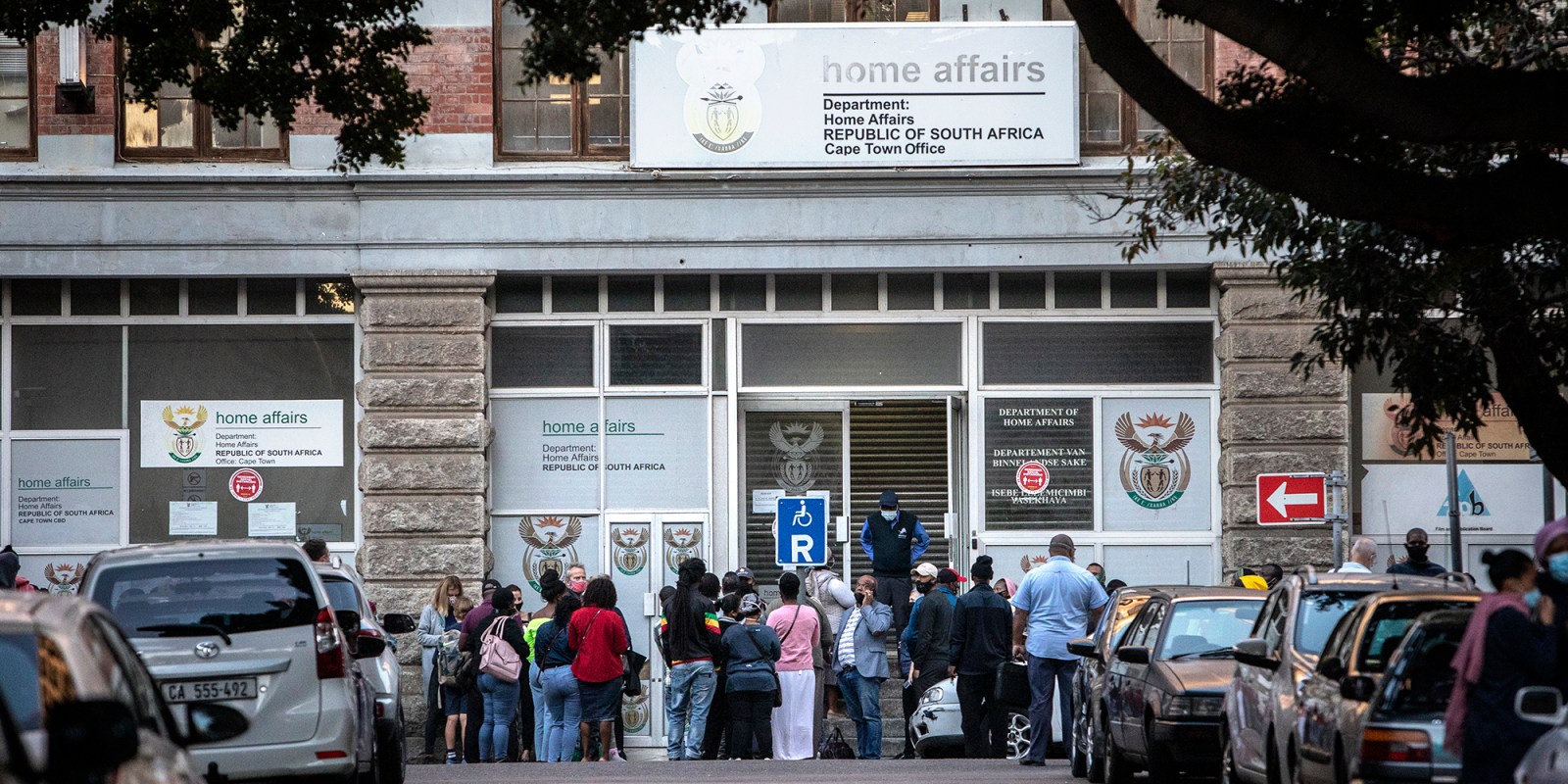 Years of waiting for permanent residence to be granted, unable to work, open a bank account or sign for a cellphone contract, exact a heavy toll on a person.

“I can’t sign contracts with industry partners. I can’t open bank accounts. I am completely dependent on my partner,” says James (not his real name), who’s been waiting for word on his permanent residence application for several years.

The two established a business that has created five permanent jobs and kept it going during Covid-19 by dipping into their savings.

“It’s grim,” says Alice (not her real name), who is considering taking the children and leaving South Africa for a country that would allow her to work and support her family.

“My cellphone is not mine… I don’t have a bank account,” says Alice, whose application for permanent residence has been in the system for years.

Jason (not his real name) says he is tired of calling the Home Affairs helpline as the years tick by and his child gets older.

Daily Maverick reported in late August (Home Affairs, where permanent residency applications go…) that a presidency briefing document to the National Economic Recovery Committee, part of the architecture to drive key structural reforms, advised Home Affairs that “the processing of applications need to resume as soon as possible”.

Home Affairs told Daily Maverick that the backlog included pre-Covid-19 permanent residence applications and that a team had been put together to deal with the 33,700 applications.

With the state of disaster declared in March 2020, Home Affairs suspended the processing of permanent residence applications. However, a June 2021 gazetted directive stated that this would resume on 1 January 2022.

*James and Alice, along with their partners, have invested in South Africa – in the case of Alice, the forex equivalent of well over R9-million over a decade or so. They have created jobs for locals. And yet they, along with tens of thousands of others who have applied for permanent residence, remain in limbo.

Without a permanent residence permit, it’s not possible to work legally, open a bank account or even renew a car licence. It’s illegal to drive an unlicensed vehicle. Some might be rich enough to hire cars, but not everyone is.

When the driver’s licence of a permanent resident applicant’s originating country expires, even renewing an AA-approved international driver’s permit is no longer an option – and with only a temporary permit it’s impossible to apply for a South African driver’s licence. The school run has just become impossible to do legally.

Day-to-day life is difficult, says Alice: “Because of the situation, I’ve never felt really part of the country. I never felt legitimate.”

Anxiety is also real for James, who says he can’t leave the country pending his still-in-progress application in case he isn’t allowed back in. Never mind having to wait for years for a decision. “All the documents, all the time, all the stress.”

At times, it seems everyone knows someone, or of someone, caught in this bureaucratic loop. And a whole industry seems to have arisen around permanent residence applications.

This includes so-called agents who charge up to R10,000 to ensure the paperwork is put together right and facilitated through VFS Global, the service provider engaged by Home Affairs.

“All permanent residence permits applications must be done online: www.vfsglobal.com/dha/southafrica. Once your application has been submitted online, you need to book an appointment at the nearest Visa Facilitation Centre in which you intend to live and work to submit supporting documents and have your biometrics taken…” according to the Home Affairs website (PRP).

Establishing a business, retiring, having critical skills or being financially independent are grounds to apply for permanent residence under the Immigration Act, according to the Home Affairs site.

“VFS Global is glad to support DHA [Department of Home Affairs] in delivering an integrated service which encourages proactive measures towards delivering a modern and seamless service.”

Pending the official determination of a permanent residence application, the applicant must have a temporary permit. These lapse every two years – and every application not only requires the payment of fees, but also X-rays to prove the absence of TB, a doctor’s report, police clearance certificates from every country lived in since the age of 18, birth certificates, marriage certificates and so on. The list is long.

And the complaints are endless, as outlined by Twitter user @tomaton following the initial Daily Maverick report:

Currently termporary residence renewals are taking around 8 months instead of 1. Plus the @VFSGlobal accepted my payment for permanent residency In Jan 2021 despite not accepting applications. No evidence of a full refund yet. But I’m trying to get one.

@BonganiMrara2 mentioned a relative’s application that has been stuck in the system for three years:

relative’s application in the system since 2018. Is the Roodepoort office where these applications are processed?

Some people have simply given up, like the Cape-based couple who, according to the grapevine, closed their business and relocated to another country after years of unsuccessful battles with Home Affairs.

James says South Africa competes globally for investment and entrepreneurs, but it’s a challenge. “The authorities are not making it easy. It’s definitely not easy due to all the administrative hurdles.”

For Alice, difficult family decisions lie ahead. For Jason, the wait continues – as it does for thousands of others hoping to live in South Africa legally.

Government’s review of the immigration regulatory framework – the presidency document described the current process as “lengthy, unnecessarily complicated” – is expected to be completed by the end of October. It’ll come with recommendations of what should be changed to support skilled immigration and investment deemed vital for economic growth.

It remains to be seen whether this is a silver lining for those who have been waiting for years to make South Africa their home and contribute to the economy and their communities. DM

*Names have been changed due to individuals’ fear of victimisation.