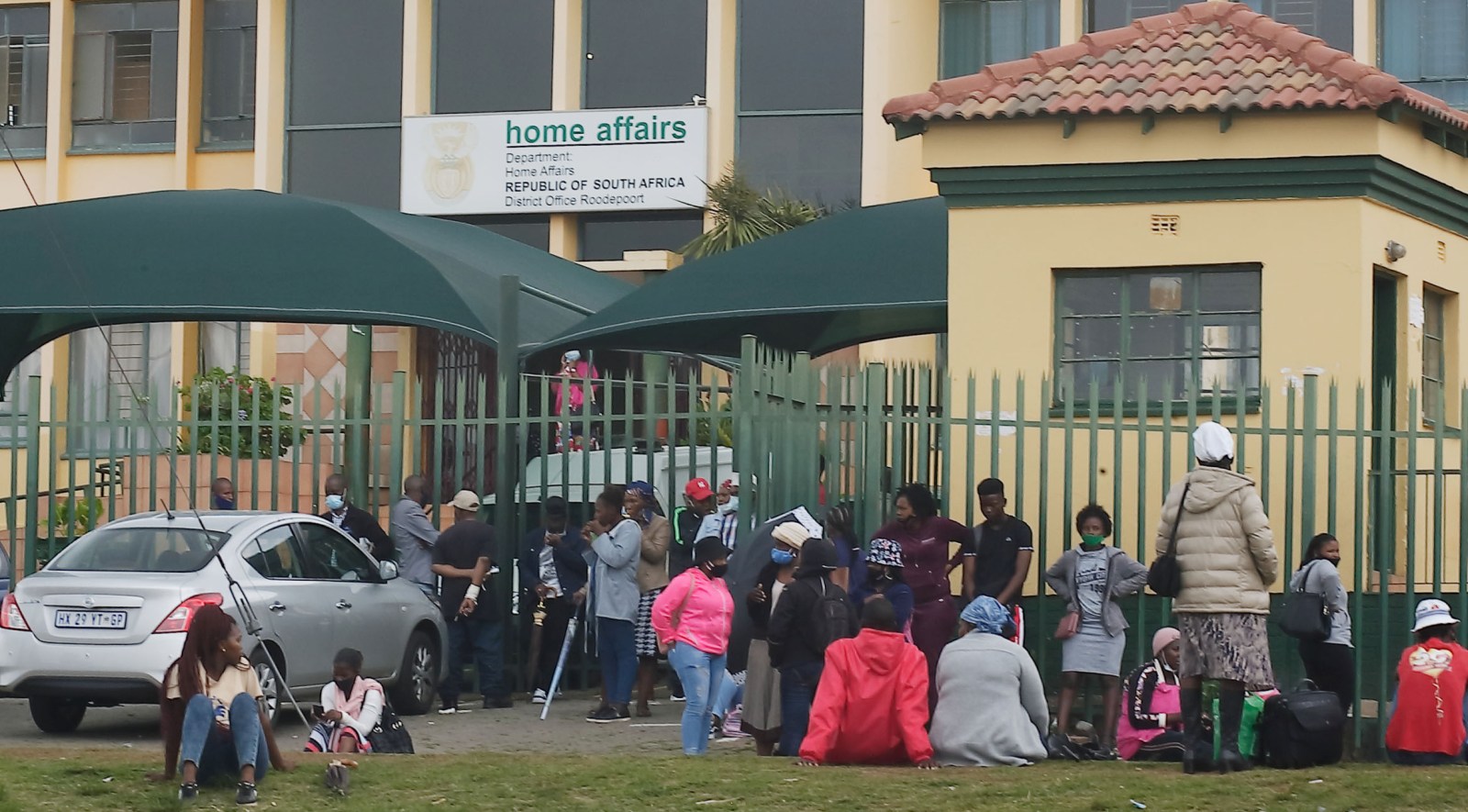 The Home Affairs Office in Roodepoort, South Africa. The Department of Home Affairs is a custodian, protector and verifier of the identity and status of citizens and other residents in South Africa. (Photo by Gallo Images/Fani Mahuntsi)

Home Affairs should resume processing permanent residency applications that have been suspended since March 2020 ‘as soon as possible, with measures to reduce this backlog’, according to a Presidency document from earlier this month.

But it’s only from 1 January 2022 the permanent residency applications would again be considered, although appeals against permit decisions restart from October 2021, according to Home Affairs Minister Aaron Motsoaledi’s State of Disaster directions in the 30 June 2021 Government Gazette.

The permanent residency application stoppage over the past 17 months has left tens of thousands of people – 33,700 by Home Affairs’ own count – in limbo.

When asked whether halting the processing of permanent residence application was not a violation of the Immigration Act – its preamble stipulates expeditious issuing of residence permits though simplified procedures based on predictable and reasonable criteria – the Home Affairs written response was it “is offering services in line with the State of National Disaster and the ministerial directions. This is within the provisions of law”.

The State of Disaster was declared on 15 March 2020, and has been renewed without fail since then. South Africa remains in Covid-19 lockdown; on Thursday, the country marked lockdown day 518.

The Presidency document, seen by Daily Maverick, was presented earlier in August to what’s called the National Economic Recovery Committee.

The committee is understood to be part of implementing the Economic Reconstruction and Recover Plan President Cyril Ramaphosa presented in Parliament in mid-October 2020, and works alongside Operation Vulindlela, the joint initiative between the Presidency and National Treasury to undo bottlenecks to key structural reforms for economic growth.

“Investors and industries find the process of obtaining a scarce or critical skills work permit to be lengthy and onerous and sometimes ineffective at solving their short-term skills shortages,” said the Operation Vulindlela presentation to MPs on Wednesday.

For immigration specialist lawyer Gary Eisenberg, the suspension of processing permanent residence applications since March 2020 “has been the undoing of the entire immigration system”.

The 60-day turnaround time regulations stipulated on paper already had “evaporated” – a four- to five-year residency application process has become routine – in a complex mix of factors, including resignation of senior Home Affairs officials.

“The lack of proper adjudication capacity has effectively transformed an architecturally simplistic process into a conflagration for many people,” Eisenberg told Daily Maverick via email.

“Foreigners, who have invested in this country in one way or another – buying a home, keeping cash in a South African bank, employing a single South African as a domestic or in any other capacity, or local business interests – can no longer rely on the visa application process to live an ordinary, secure existence in this country. Coupled to the quality of decision-making are the endemic delays in visa adjudication forcing people to wait five to eight months for decisions in the routine flow… Obtaining permanent residence status is therefore relied on as the ultimate antidote to this bureaucratic failure.”

No one yet has challenged Home Affairs’ decision to suspend processing permanent residency applications, seemingly as courts have erred on the side of caution to largely uphold Covid-19 motivated executive directives.

From individuals, who remain vulnerable pending the finalisation of permanent residency even if they invest money, conduct business and create employment, to businesses which have long complained of residence permit, visa and immigration difficulties, and immigration specialists, to now also some circles in government, dissatisfaction with Home Affairs seems widespread.

Coincidentally, the department’s immigration services have missed six out of its 10 targets, yet overspent by 101% its R1,26-billion allocation, according to Parliament’s research unit summary of performance in the final quarter of the 2020/21 financial year prepared for MPs last week. The overspend was attributed to expenditure on meals at Lindela repatriation facility, and legal fees.

On the backlog of permanent residence applications the Presidency document described as “large”, Home Affairs differed, and downplayed the numbers.

The backlog currently stands at 33,700 permanent residence applications, but this predated the Covid-19 pandemic, and a team has been put together to deal with the backlog.

“In July 2021, the department analysed the applications it received for permanent resident permits between January 2015 and December 2020. In this period 119,517 applications were received,” said the Home Affairs written response of Wednesday evening.

“The analysis of this data indicates that, contrary to popular belief, most of the applicants to whom Home Affairs issues the highest number of permanent residence, are in the category of ‘spousal and dependent’ applications. More than 68,400 applications over this period fell into this category. These applications do not require the spouse of the dependent to be economically active.”

On those numbers, it seems Home Affairs has issued just 17,417 residence permits for primary applicants, not spouses or dependents. Sections 26 and 27 of the Immigration Act allow permanent residency applications from those who for at least five years have had work permits, including corporate permits, those with special skills, or those wanting to open a business or retirees.

Home Affairs told Daily Maverick it “regularly reviews the services it is offering to take into account the threat posed by Covid-19” and thus decided to temporarily suspend processing of permanent residence applications.

“There were no applications coming in during this period,” said the department, adding other reasons included a ban on international travel, port closures and the closure of the department’s VFS service provider offices to minimise contact services.

But Home Affairs referred a question whether it is finding itself under pressure over permanent residence and other immigration measures, to the Cabinet spokesperson.

“Decisions of Cabinet are taken on the basis of what is before it,” said Government Communication and Information System [GCIS] Director-General Phumla Williams, who speaks for Cabinet, on Thursday.

New immigration documents may well eventually be found in Cabinet for consideration.

The Presidency document outlines a review of the immigration policy framework and processes for skilled immigration, led by Mavuso Msimang, a former Home Affairs director-general, to coordinate inputs from the departments of Home Affairs; Trade, Industry and Competition; Employment and Labour; and Higher Education and Training.

That four-month review is under way and is set to be completed by the end of October 2021 to “provide recommendations on the changes that are required to the policy framework for skilled immigration”.

Skilled immigration, and permanent residency, are part of this drive, mentioned as key in Ramaphosa’s February 2021 State of the Nation Address to promote economic growth and attracting skills.

And while Home Affairs did publish its draft list of scarce skills for comment within the presidential deadline, it included some odd skills like camping ground manager.

The public comments are currently being analysed, and Home Affairs’ target date for releasing a final list of scarce skills has emerged as 17 September 2021.

Whether that will happen remains to be seen. Also uncertain is the impact, if any, on an immigration regimen that has suspended processing permanent residence applications until 1 January 2022. DM