The amount of school time that South Africa’s children have missed over the past 18 months may never be recovered – and experts warn that it could mean a generation disadvantaged into adulthood. A decline in understanding and skills has already been seen.

Although the government’s focus has seemed to be on getting matric students through their final years during the Covid-19 pandemic, a serious crisis is brewing in the lower grades. After canvassing dozens of South African school principals, teachers and researchers, DM168’s investigation confirms that many young learners are in educational trouble, which is likely to worsen as they grow older.

Much of what has been written about the effects of the pandemic on South African education has been based on projections and estimates. Just two relatively small-scale studies have been carried out on the actual situation – the Early Grade Reading Study (EGRS) II and the Funda Wande Evaluation – both of which returned worrying results.

The first study showed that Grade 4s in 2020 reading in their home language learned about a quarter of what they should have learned in that time, and learned about half of what should have been covered for English as a first additional language. The second study showed that Grade 2s at no-fee schools had learned less than half of what they should – at a maximum.

Trying to assess the educational status quo through exam marks at the moment may be misleading, education experts warn, because exam papers differ drastically from school to school because of curriculum trimming. As a result, different metrics have to be sought to measure pupil performance currently.

DM168’s findings include the following indications that pupils are struggling:

Ask one of the country’s top education researchers what the loss of pandemic school time will mean for current pupils, and he says simply: “It’s very, very bad.” Nic Spaull, associate professor of economics at Stellenbosch, says that the average 10-year-old in June 2021 knows the same amount as the average nine-year-old in June 2019.

And while the Department of Basic Education has recently started paying lip service to its concerns around the losses sustained over the past 18 months, Spaull believes there is “no indication” of “any credible catch-up plans” by government. As for the long-term effects on the children involved, Spaull says: “This will be with them for life.”

There is global evidence to suggest that children who are subjected to unscheduled learning breaks may bear the negative effects well into adulthood. A May 2021 paper on Covid-19 effects on South African education, by a team of researchers led by Debra Shepherd, states that “international studies of disasters that have caused similar significant disruptions to schooling have shown lifelong negative impacts, such as lower ultimate educational outcomes and lower lifetime earnings”.

The Department of Basic Education is aware of the situation. “It is not a secret that teaching and learning is not happening effectively due to the need to adhere to the safety measures in schools,” spokesperson Elijah Mhlanga told DM168. He also acknowledged that “the majority” of South African schools were not able to implement online or remote learning during the pandemic lockdown.

But despite Mhlanga’s calm tone, those in the education sector interviewed by DM168 expressed something akin to panic about the status quo.

“The only stories I am hearing from teachers and principals are stories of despair – either rushing to cover content and knowing they are not really teaching it properly, or simply falling further and further behind the expected coverage,” said Dr Lynn Bowie of Olico Mathematics Education.

Together with colleagues, Dr Bowie warned in 2020 of the worrying educational precedent suggested by Pakistan, where four years after a three-month schooling disruption caused by earthquakes, learners were still 1.5 years behind their peers. Now, local researchers are projecting that it may take a full decade for the South African education system to return to its pre-pandemic state. Equal Education researcher Jane Borman told DM168 that it has been estimated that the skills of Grade 12 learners will be “lower than usual” over the next 10 years. 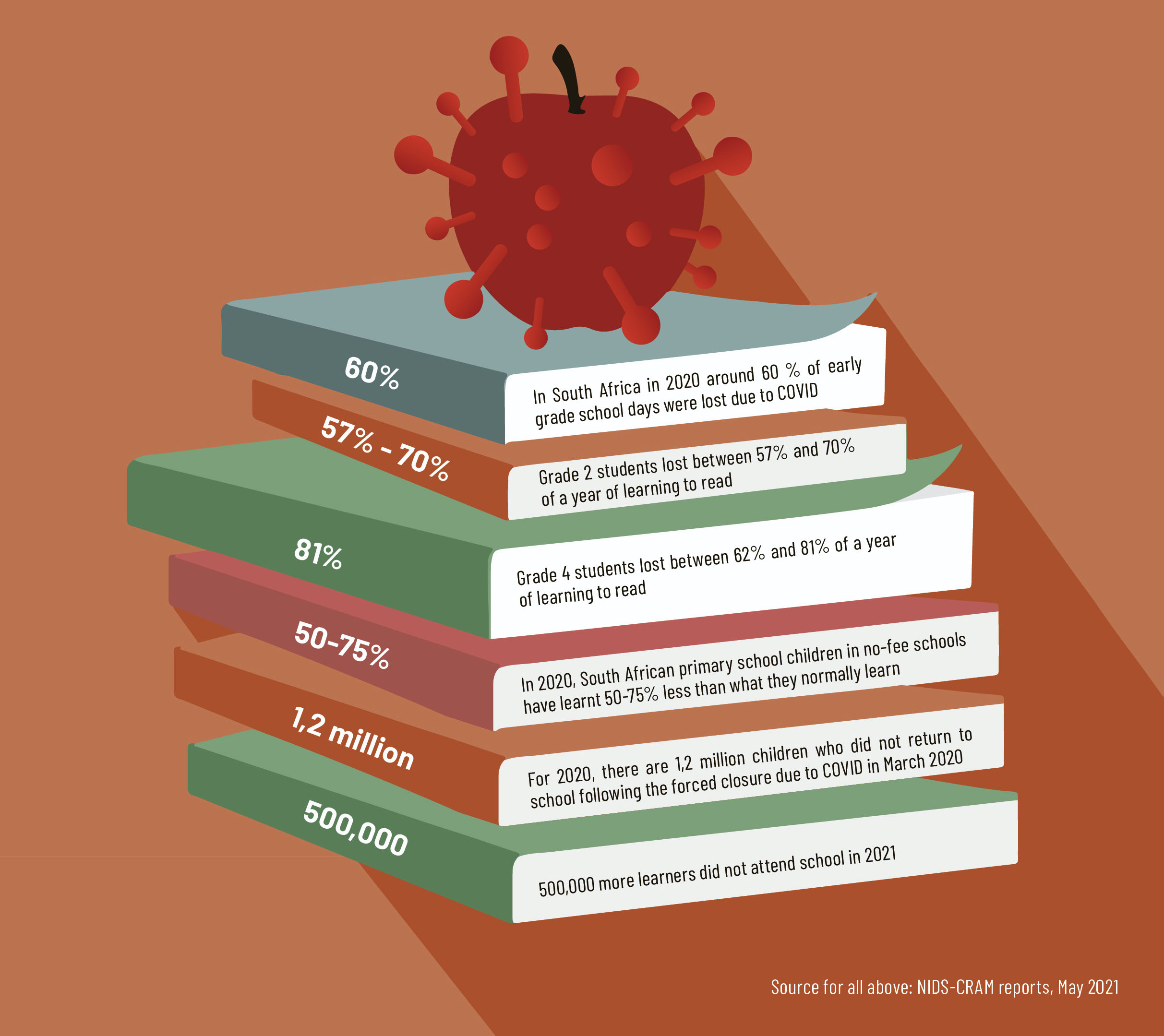 Adrie Schoeman, managing director of Master Maths, said that she was concerned about how this cohort of learners was going to fare at tertiary level. Master Maths is a chain of private tutoring centres in mathematics and physical science. Schoeman said that traditionally the demand for private tutoring is highest in grades 10 to 12, but this year an increase had been noted in enrolments of learners as young as Grade 4. Dominique Hsuan, director of BrightSparkz Tutors, told DM168 that more than a third of all enquiries from parents were now concerning grades 1 to 7.

Schoeman said that, based on feedback from her franchise owners, tutors had seen “a significant decline in understanding, reasoning and applying the required skills for all grades since March 2020”. A very similar account was given to DM168 by the head of an independent mid-range fee school in Midrand, Gauteng, who said teachers had noticed “a significant decline in work ethic, study skills, concentration and ability to work to deadlines since the pandemic started”.

The irony is that when the need for private tutoring is at its highest, more parents than ever are experiencing a financial crunch. Schoeman confirmed that although there was now increased demand for additional tuition, there was simultaneously “a severe strain on parents’ disposable income”.

All experts agree that the effects of the pandemic learning disruptions will be felt most acutely by the most under-resourced schools.

At one government primary school in KwaZulu-Natal, 28 out of every 100 children are now in the remedial stream. Before the pandemic struck, in 2019, this applied to only five out of 100.

Some say that the real impact will only be experienced a few years down the line. This is the view of Trevor Harbottle, operational head of Get Ahead College, who has almost 20 years of experience in both government and independent schools. Harbottle says he is particularly concerned about what will happen “when the current cohort of Grade R-3 starts to enter and proceed through the intermediate phase without sufficient background in phonics, blends, reading, etc – not something that can be short-cut”.

He predicts the same will apply to current grades 5 to 7 when they proceed through high school: “I believe we will find problems with essay writing, algebra application, etc, which are essential skills for high school.” Harbottle also expressed concern about potential social and behavioural problems of learners stemming from these educational disruptions.

At one rural, low-fee independent high school in the Eastern Cape, an increased need for drug-testing was reported, with increased positive results. A rise in learner drop-out numbers has also been attributed to the stresses of the pandemic, with 1.2 million South African children dropping out of school in 2020 and a further 500,000 in 2021. The Department of Basic Education says it is unclear whether this non-attendance is temporary or permanent.

Suggestions for how to remedy the crisis range from instituting summer and after-school learning programmes to dropping subjects and redesigning exams. Spaull is concerned, however, about what he calls a “business-as-usual” attitude from government when it comes to education – “despite all the learning losses and despite the loss of teaching time”.

Nkulu Madonko, CEO of the Common Good NGO, which partners with the Western Cape Education Department, told DM168 that in his view remedies were far from clear.

“If you have missed out on learning some foundational concepts, it is very difficult to catch this up,” Madonko said. “Our pupils in SA have missed a year by current estimates. When will they catch up?” DM168

See the latest update on schooling plans following a briefing by Motshekga on Sunday, 28 August, 2021: Learning losses remain a concern but children and teachers will get October break