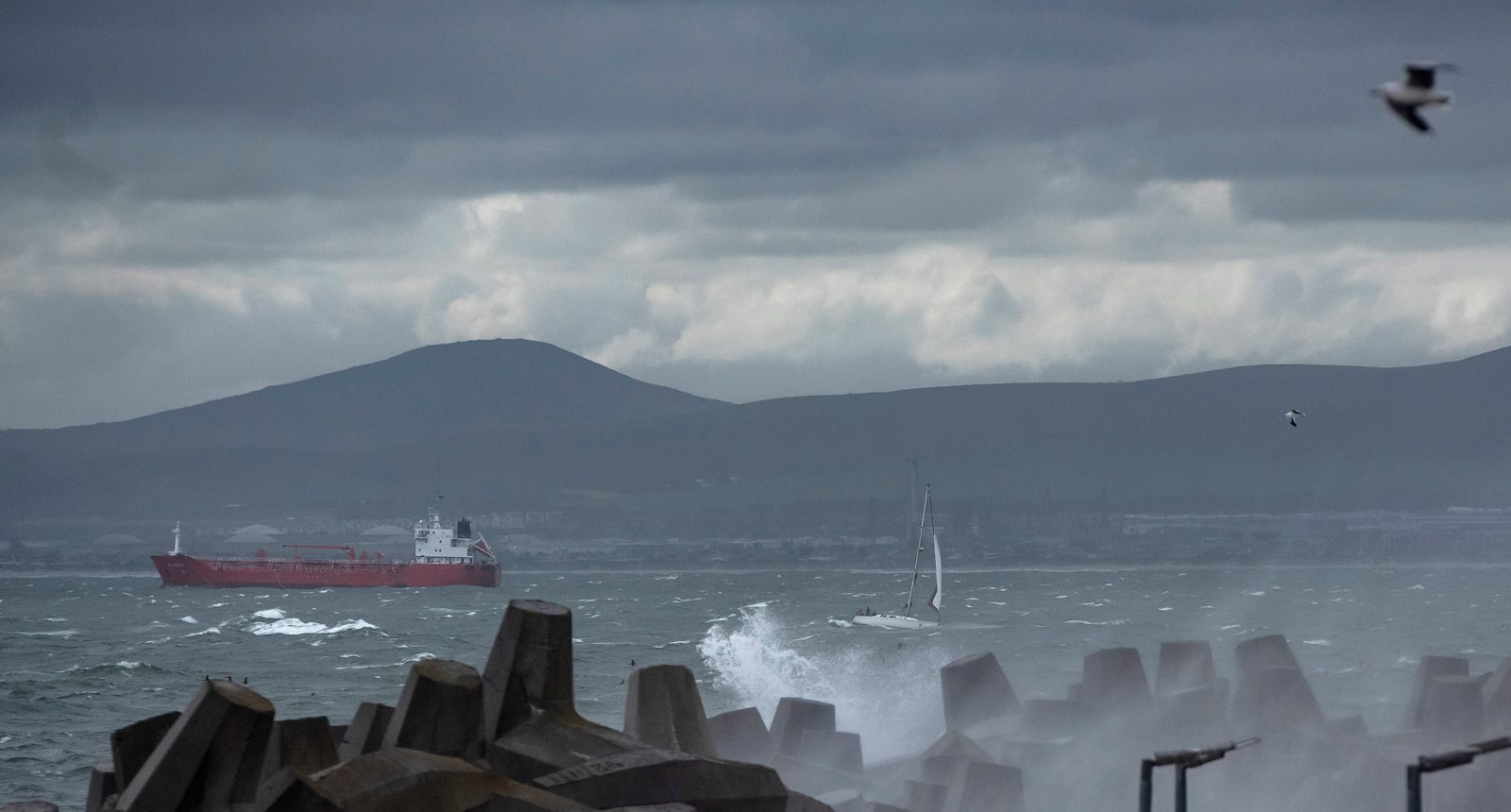 A huge swell is expected on the Atlantic coast, as seen here with a small yacht entering Table Bay harbour before it arrives, Thursday 26 August, 2021. (Photo: Brenton Geach)

On Thursday, a cold front made landfall in the Western Cape before moving to other parts of the country, bringing high winds and snowfall, said the South African Weather Service.

On Thursday, an “intense cold front associated with a steep upper-air trough” hit the western parts of the country, said the South African Weather Service.

Over the weekend the cold front will move to other parts of the country, it said.

On Thursday, strong to near gale-force northwesterly winds, from 50-60km/h gusting up to 80km/h, were reported in the province.

Rainfall accumulations of 20mm to 30mm can be expected, with heavier falls of 40mm to 50mm expected over the southwestern Cape, said the weather service.

This rainfall will lead to flooding in informal settlements and could pose a risk to motorists’ ability to drive safely.

They are advised to reduce speed and to keep safe following distances.

When a cold front hit the province in July, the City of Cape Town said that because of Covid-19 health and safety measures it was hampered from providing shelter for informal settlements affected by flooding.

At the time, to help those affected by heavy rain and high winds, the City’s transport department provided sand and milling where possible to raise ground levels in sodden townships and settlements.

The weather service also warned that on Friday and Saturday there would be “freezing levels” over the Western Cape and parts of the Northern Cape.

Snow in the Cape and KwaZulu-Natal

As a result of this, snowfall accumulation of between 5cm and 10cm is expected in the high-lying areas of the Cape Winelands, Garden Route, Central Karoo and the southern and western parts of the Namakwa District in the Northern Cape.

A statement by Charlotte Powell, the City’s disaster risk management spokesperson, said the City’s services are on standby to deal with any situation related to the predicted adverse weather, such as clearing flooded roads, blocked drains and trees.

From Friday the snowfall would spread to the high-lying areas of the Eastern Cape, and the Drakensberg region of KwaZulu-Natal during Saturday, said the weather service.

At the same time, this weather system would move into the Eastern Cape from Friday afternoon as well as the central interior of South Africa, including KwaZulu-Natal, on Saturday.

In the Eastern Cape and KwaZulu-Natal, a “significant lowering of local atmospheric freezing level is anticipated, allowing for disruptive snowfall in some places”, said the weather service.

The Gauteng Weather Service tweeted that a “strong cold front” would hit the province around midday on Saturday.

Before the cold front makes landfall, strong winds (40km/h to 60km/h) are likely to occur over parts of the country’s interior, said the weather service.

The weather service planned to issue another statement this week “to provide greater detail regarding this rapidly developing weather system”. DM