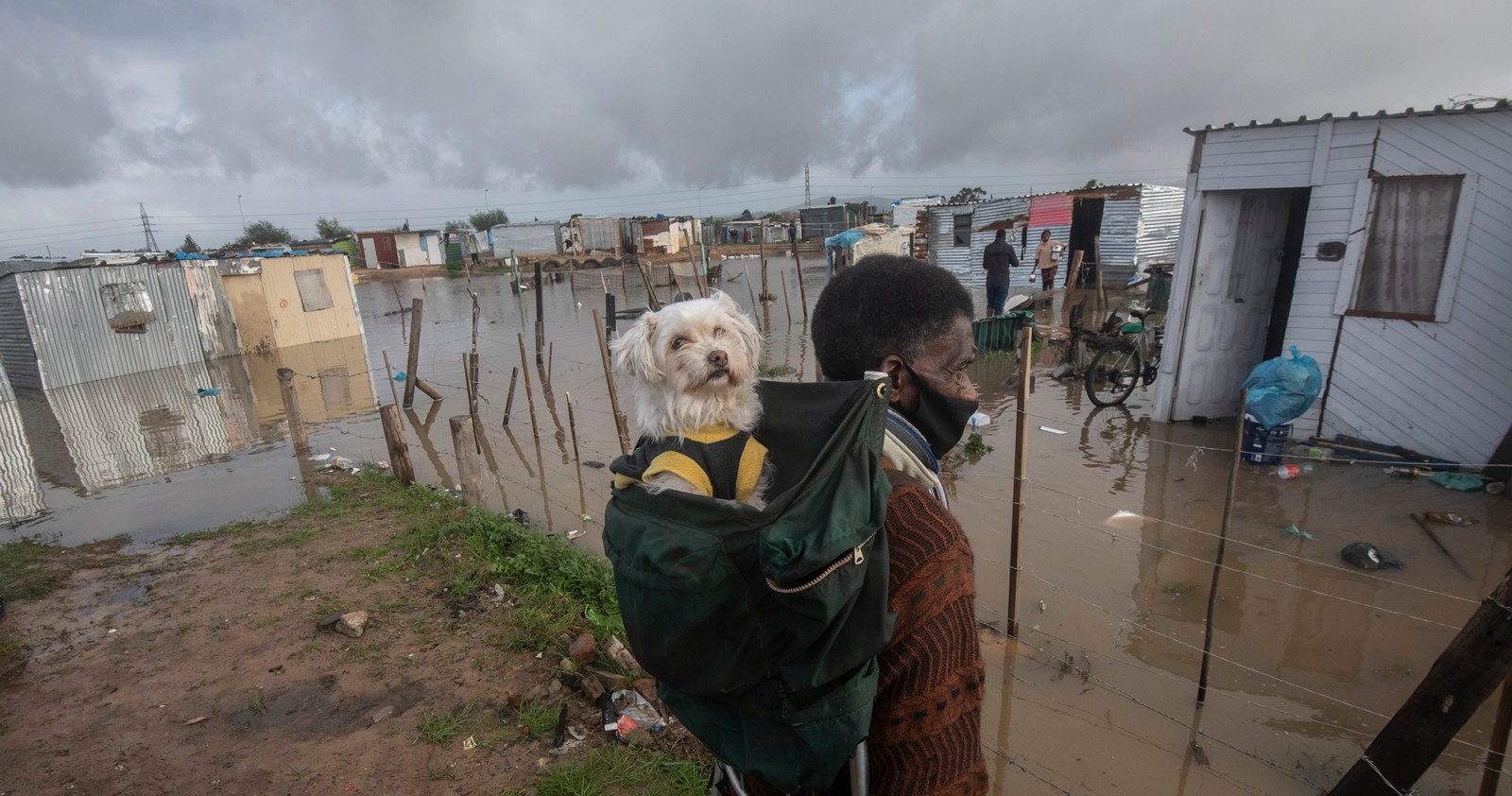 A man and his dog at Covid-19 informal settlement in Bloekombos, Kraaifontein on 1 July 2021 in Cape Town, South Africa. It is reported that heavy rains and floods have battered some parts of the Western Cape and informal settlements in the area have been adversely impacted. (Photo by Gallo Images/Brenton Geach)

The City of Cape Town has struggled to attend to affected communities in the midst of tighter lockdown measures.

Since 27 June, Cape Town has endured another severe winter cold front, coupled with flood warnings from the South African Weather Service. Informal settlements have been lashed with heavy rains, resulting in waterlogged streets and homes. The City of Cape Town has said, owing to Covid-19 health and safety measures, that it has been unable to provide shelter for affected communities.

In a statement released on 29 June, Mayoral Committee Member for Safety and Security JP Smith said that the South African Social Security Agency (Sassa) — an entity of the Department of Social Development which assists with humanitarian relief during floods — insisted that affected residents be sheltered in community facilities. Smith said the City was unable to do this “due to the Covid-19 pandemic and the health and safety precautions that apply to prevent the spread of disease”.

To assist those affected by the heavy rain and high winds, the City’s Transport Department is providing sand and milling where it is possible to do so, in order to raise ground levels in sodden townships and settlements. However, Smith noted that milling is not a feasible solution in many of the waterlogged areas.

The city is also working with Sassa to provide “soft relief” in the form of blankets and meals, said Charlotte Powell, spokesperson for the City’s Disaster Risk Management.

Smith also said that the pandemic has affected the City’s response to the impact of adverse weather conditions. Lockdown regulations mean fewer staff members are on duty at any given time, which causes delays in attending to incidents, according to Smith.

News24 also reported that in Bloekombos, near Kraaifontein, up to 80 people are homeless, with some shacks collapsing in the recent storms.

Gladys Mehlo, who lives in Bloekombos with her two grandchildren, said she was not sure where she would sleep. “My place is still flooded, last night I stayed with someone I know not too far from here… now, I don’t know what I’m going to do because my family is far, they’re in Stellenbosch,” said Mehlo.

Some formal residential areas have also been affected in Belmont Park in Kraaifontein, Goedmond in Durbanville and Sonstraal Heights in Brackenfell. The Vygieskraal canal has overflowed, resulting in flooding in the Vygieskraal and Hadijie Ebrahim informal settlements, said Powell.

This is the second winter season where the City of Cape Town has had to attend to flooding in the midst of the coronavirus pandemic.

By 2 July, Disaster Risk Management was still busy with assessments and could not accurately determine the overall impact. “While we don’t have the resources to visit every flooded household, not everyone affected reports their situation,” said Powell.

Smith said that assessments have found that the majority of the reported flooded areas “are situated on land that is not suitable for habitation, like wetlands, waterlogged areas and private land which have been unlawfully occupied,” said Smith.

Last year, City of Cape Town saw an increase in land occupations as more people were plunged into unemployment due to many industries shutting down amid lockdown restrictions.

Some of these new informal settlements were named ‘Covid-19’, ‘Lockdown’ and ‘Sanitiser’ by residents.

“The City has been communicating that it expects quite a high number of flooding incidents this year due to the spike in unlawful occupations that have occurred,” said Smith. DM