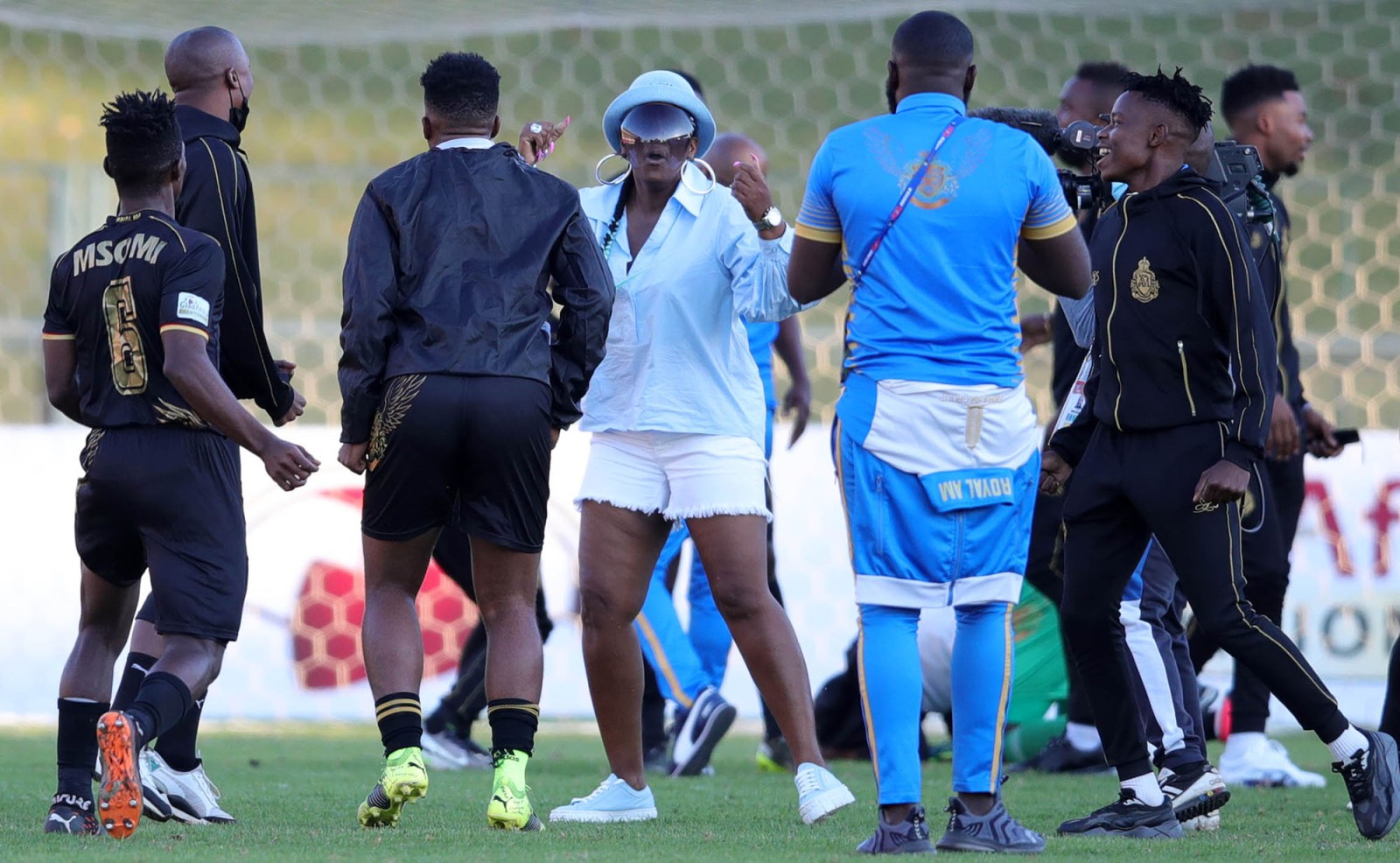 Shauwn Mkhize celebrates a victory with players during the GladAfrica Championship 2020/21 match between University of Pretoria and Royal AM at Tuks Stadium, Pretoria, on 16 May 2021. (Photo: ©Samuel Shivambu / BackpagePix)

Royal AM are in the DStv Premiership for the new season after buying the status of cash-strapped Bloemfontein Celtic. Royal had been in and out of the courts, fighting for a place in the top flight.

The Premier Soccer League (PSL) confirmed that it has vetted the sale of Bloemfontein Celtic to Royal AM, bringing to an end the existence of the much-loved Free State team.

The PSL explained that the club previously known as Bloemfontein Celtic will participate in the DStv Premiership as Royal AM in the upcoming 2021/2022 league season, with its home venue being the Chatsworth stadium.

Furthermore, the club previously known as Royal AM will participate in the GladAfrica Championship as Tshakhuma Tsha Madzivhandila (TTM), with its home venue at Thohoyandou stadium.

“We must consider two things: the issue of the insolvency of the club, the risk of insolvency. If somebody says, ‘I cannot afford’, what do you do?” PSL chairman Irvin Khoza told a media briefing, explaining how Celtic was sold.

The hierarchy of the Bloemfontein-based outfit had struggled to keep up with the financial demands of running a football club. Time and again, there were rumours that its owner for seven years, Max Tshabalala, wanted to sell the club. And there were reports that players had not been paid.

Royal, who have been in and out of the courts fighting to be promoted to the top flight, swooped in and bought the Premiership status of financially ailing Celtic.

The KZN club had taken to the courts following an arbitration ruling which handed then second-placed Sekhukhune United three points and propelled them to the summit of the GladAfrica Championship, and saw Royal lose out on automatic promotion to the top tier of SA football.

The three points granted to Sekhukhune related to a misdemeanour by Polokwane City in a match played at the halfway point of the 2020/2021 season. The Limpopo side had failed to field the prescribed number of under-23 players.

Royal, owned by businesswoman and reality TV star Shauwn Mkhize, felt the rewarding of the three points was unfair. The courts disagreed and the KZN club suffered multiple legal lickings. Now they have finally found their way into the Premiership.

The KZN-based club was also within the disciplinary processes of the PSL and was found guilty of bringing the league into disrepute just a week ago. This related to them boycotting the relegation/promotion playoffs in protest of the decision to promote Sekhukhune.

The PSL’s legal counsel, Michael Murphy, explained that the sins of Royal AM will now be inherited by TTM.

“The acquirer [TTM] will be responsible for and will deal with, and where necessary satisfy all and any claims that may exist or which have been, or which are brought by or against the club… whether before the disciplinary committee, the dispute resolution chamber or any court or tribunal,” said Murphy reading from a communique that had been shared with all the interested parties in the days leading up to the sale being approved.

TTM make a return to local football, though a division lower, after the club was sold midway through last season, and has since been renamed Marumo Gallants. TTM had gained entry into the 2020/2021 Premiership season after doing to Bidvest Wits what Royal have now done to Celtic.

End of an era

Much like Wits, who ceased to exist last season after 99 years, Celtic have played a major role in the history of South African football.

They were founded in 1969 and won the SAA Supa 8 back in 2005. Furthermore, the club has been a home for household names such as John Maduka, current Golden Arrows coach Lehlohonolo Seema and Moses Spandeel.

The club was also known for its passionate fanbase, which backed it unflinchingly through the inclines and declines over the years.

Khoza said the PSL’s hierarchy was well aware of the impact of the social loss that comes with Siwelele ceasing to exist. But, he added, the PSL had to be practical.

“We have been practising something very interesting to say, ‘offer a team to the community first.’ If there are no takers, what happens next? Because as a league we’ve got an obligation to the sponsors that when the league starts, you need to have 16 teams in the DStv Premiership and 16 in the GladAfrica Championship,” said Khoza.

“So, you’ve got to make a decision. Not because of convenience but because of the reality. Because if you are not providing that, there’s a breach – it’s got its own penalties, it affects our funding model – which is a problem that besets us every time, we don’t have too many people in our football with deep pockets.”

The president of the South African Football Players’ Union (Safpu), Thulaganyo Gaoshubelwe, told Daily Maverick that some of the players were struggling with the sudden change.

“Obviously, the players have been in Bloemfontein for a long time, they’ve built a rapport with supporters and with the environment. But the reality of the matter is that the club has been sold,” Gaoshubelwe said.

Gaoshubelwe said over the years they had fought to ensure that in such instances no players found themselves sidelined or unfairly dismissed.

“All the players who still had contracts with Bloemfontein Celtic would then go into the Royal AM family. So as things stand, all those players’ contracts are there.

“However, it could be that when they get to the other side, they are told they are surplus to requirements, then they [the team] need to do the honourable thing. Honour the player’s contract or pay the player out, and the player can go look somewhere else,” explained the Safpu president. DM