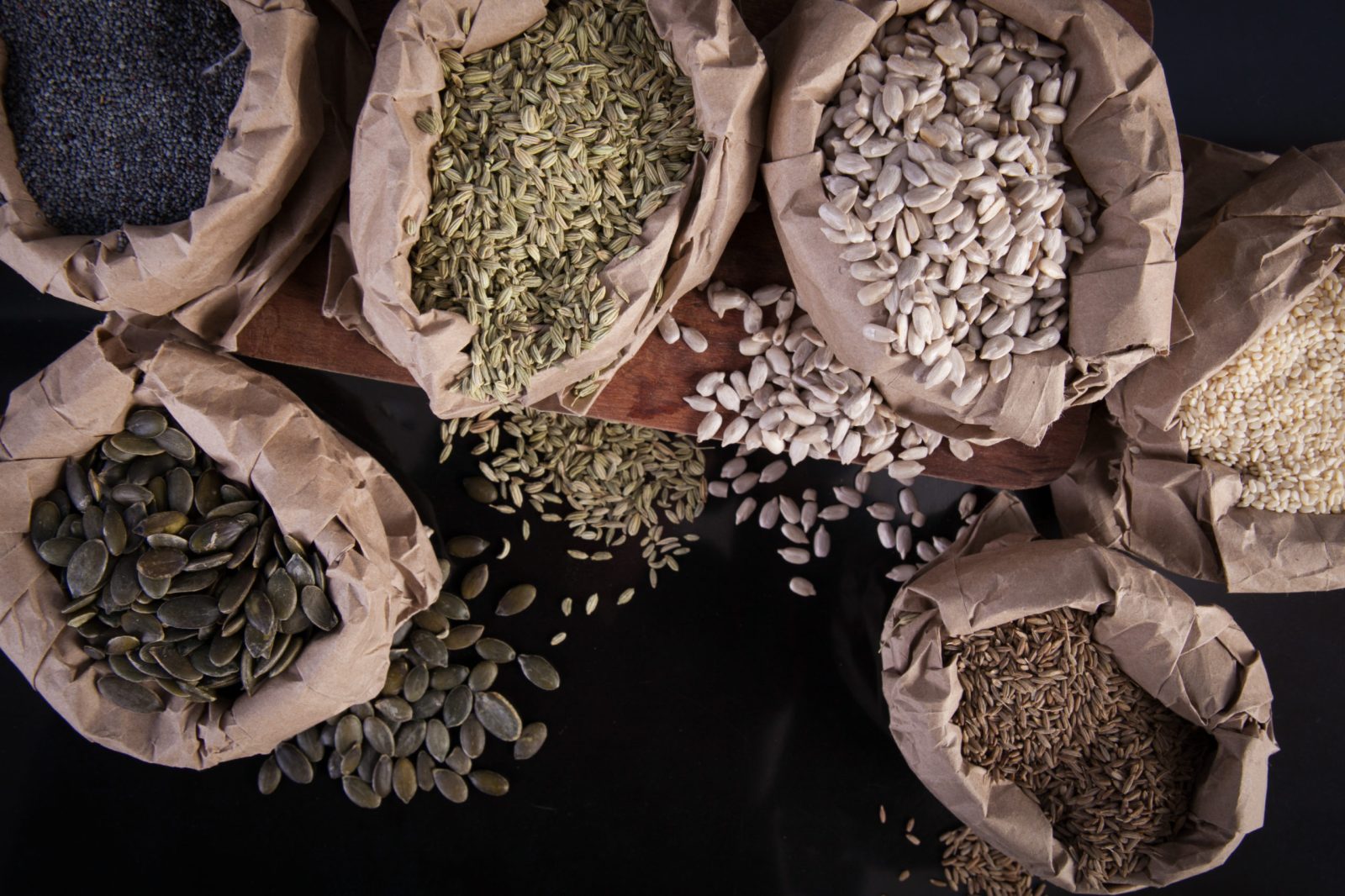 Dynamite comes in small packages, and some of the world’s most impactful tastes come from the tiniest of ingredients: seeds.

Ras-el-hanout. Panch phoran. Za’atar. Garam masala. Berbere. Fivespice. Jerk seasoning. They’re among the most impressive flavour mixes of the world’s cuisines, and there are seeds, whole or ground, in all of them.

When I think of seeds in cooking, my mind doesn’t rush to the seed bars, smoothies and granolas that come up if you do a Google search for “seeds”. My first thought is of Indian cuisine, then of Greek, Moroccan, Ethiopian; their influence in world cuisines ranges near and far. Indian cuisine, with its cumin, fennel, fenugreek, coriander, nigella, and yellow or black mustard seeds, toasted and then ground into spice mixes or included in masalas; not least cardamom, that sweetest of the spices of the East. And Greece with its fascination with sesame seeds. For those distinctive little flavour bombs, don’t only look East; Greeks use them in many dishes, while tahini (sesame paste) is a mainstay of the cuisines of the Levant. Sesame seeds are also part of the za’atar flavour profile along with sumac, oregano and thyme. Sumac, incidentally, is the thin outer covering of an inedibly hard seed, in the way that mace is the outer casing of nutmeg which, though also hard, is simply grated to become usable.

But we find seeds in cooking nearer home too; aniseed in mosbolletjies, drizzled with honey or syrup; caraway in rusks. Dill seeds are used in pickles, as are celery seeds, which make an interesting addition to a spice rub for meat or to flavour a coleslaw. Allspice: now there’s a spice that causes confusion. No, it’s not “mixed spice” with another name. Mixed spice, as in the branded little jars of it, comprises a variety of other spices such as cinnamon, nutmeg, clove and ginger and possibly also mace, coriander, caraway and, yes, allspice itself might also be in there. (Clove, by the way, might seem like an oddly-shaped seed but is actually a dried flower bud.) But allspice itself is a seed in its own right, and gets its confusing name because it has a scent redolent of cinnamon, clove and nutmeg, all at once. This means that you can, in a recipe that calls for allspice and if you don’t have any in the cupboard, concoct a quick mixture of those three in equal proportions and you should have something close enough to allspice to get away with it. In fact, allspice is the dried, unripe berry of the pimenta dioica tree and is also known as Jamaica pepper or myrtle pepper. It is also the chief ingredient of Jamaica’s jerk seasoning mix, the other main component of which is scotch bonnet chillies.

Fenugreek, interestingly, is native to the Mediterranean and southern Europe even though we associate it more with the hot cuisine of the subcontinent. It’s commonly used in garam masala and is a core ingredient of Panch phoran, the Bengali spice mix which is not ground but contains whole fenugreek, nigella, cumin, fennel and mustard seeds. Like dill and celery seeds (and other seeds such as cumin and coriander of course), fenugreek is worth adding to a ground spice rub for meat. Fenugreek and allspice are also part of the flavour profile of berbere, the Ethiopian spice blend that also includes chillies, garlic and cinnamon.

That fabulous Moroccan spice blend called ras-el-hanout does not translate as “top of the shop” for nothing. It’s the most desirable of spice blends in its home ’hood and its seeds include coriander, cumin, allspice, nigella, black peppercorns (yes, they’re seeds) and cardamom, but there’s much more in there including saffron (a stigma rather than a seed), nutmeg, turmeric (a tuber much like ginger and galangal in appearance if not colour), clove, mace and rose petals. There’s the likely champ of spice mixes, right there.

Cumin and coriander are included in chermoula, another North African marvel, which also has garlic, lemon zest and paprika. They’re also both included in Argentina’s wonderful chimichurri, along with oregano, garlic, parsley and red wine vinegar.

But wait, there’s more. A host of seeds are not associated with any of the above spice rubs, masalas or blends but play a key role in some extraordinary recipes. Breads, granolas and fruit and nut bars are a key part of many modern diets but their roots in some cases forge more broadly than that, even if some of them are more often than not simply toasted and flung over salads. Of course, peas and chickpeas are seeds too (and the latter gives us the delight that is hummus), but we’re talking about sunflower, pumpkin, poppy, chia, and other seeds which nowadays line the “healthy” shelves of our supermarkets, as if to suggest that the other seeds I’ve been exploring above are somehow not healthy. But we’ll let that go.

Pumpkin seeds need not only be used in a seed bread (such as the four-seed and dried cranberry loaf I made this week). Toast them and crush them to use instead of breadcrumbs in a coating for fish or meat and, like their sunflower seed cousins, they can be used in a pesto or a sweet brittle. Chia seeds, meanwhile, seem to find their way into puddings as well as oats mixes, but I won’t pretend to have much experience of them although some must have slipped by in a smoothie here and there without me knowing it. I might come to them when they’ve progressed beyond the fad stage.

Poppy seeds are my favourite of this batch. A lemon and poppy seed soufflé is one of the finest and most subtle desserts there is, and they make a wonderful bread or cake too, very often including lemon in the recipe. The Eastern European nations love poppy seeds and use them in savoury and sweet recipes, such as poppy seeds rolls for which a filling of ground poppy seeds is mixed with sugar, butter and lemon.

Proof that there’s a world of flavour in tiny things. DM/TGIFood