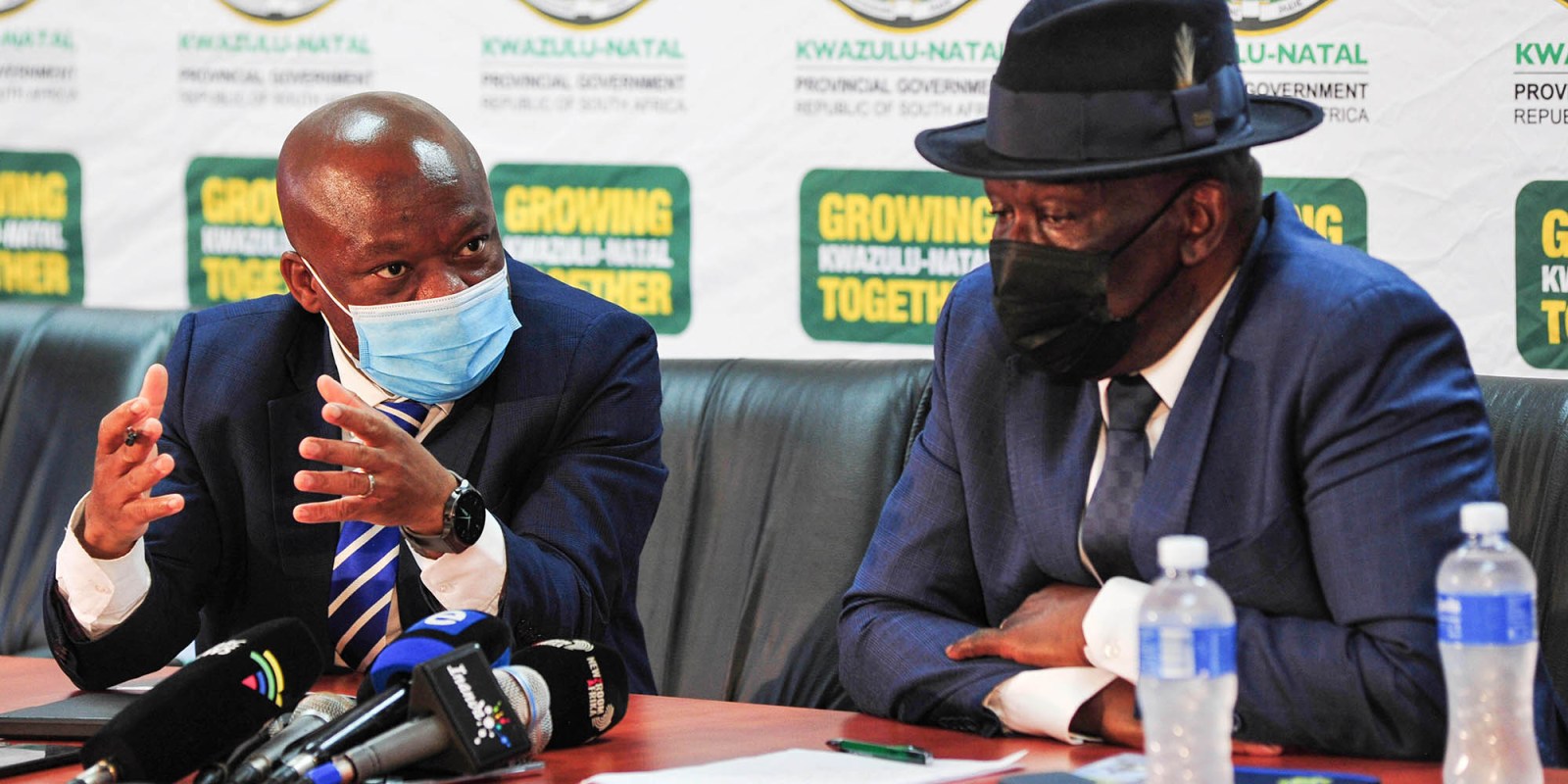 Both Cele and Zikalala stuck to their mandates on Tuesday – this was a political mop-up disguised as a report back to the nation, a near-sadistic performative bandage placed on a wound calculated and inflicted by some among their own ranks in the governing party. The ANC wounds, the ANC fixes. Viva ANC.

One would swear the violence that tore through KZN and Gauteng between 8 and 13 July resulting in more than 300 deaths and tens of billions lost to the economy in the aftermath of Jacob Zuma’s incarceration had nothing to do with the ANC or the former president.

The words “former president Jacob Zuma”, “the ANC” or “attempted insurrection” were not mentioned once during a press conference by Minister of Police Bheki Cele and KZN Premier Sihle Zikalala on Tuesday.

The slogan “radical socioeconomic transformation”, however, was slipped in for good measure for those needing to position their political antennae.

Flanked by other high-ranking officials, Cele and Zikalala reported back on the grisly details of people hacked with bush knives and set alight as well as the concentrated numbers of horrific violent deaths in Phoenix in particular.

Both Cele and Zikalala stuck to their mandates on Tuesday – this was a political mop-up disguised as a report back to the nation, a near-sadistic performative bandage placed on a wound calculated and inflicted by some among their own ranks in the ruling party.

Any honest account to the nation about the havoc that was unleashed upon us cannot ignore mention of the ANC and its members, some of whom posted “boast posts” on a WhatsApp group while the flames grew and licked about us.

Also, no mention was made that the former president’s daughter Duduzile had tweeted on 2 July: “Take the day off from being the bigger person, choose violence”, or of when any more of the instigators hiding in clear sight would be held to account.

Instead, Zikalala, who joined in calls for Zuma to be freed in the week of violence, announced that a “social cohesion and moral regeneration council” would implement a “comprehensive provincial strategy” for the benefit of citizens clearly suffering from “moral decline”.

The strategy, said the premier, would also address feelings of marginalisation based on race, perceptions that foreign African nationals “were benefiting more” from the economy, and guide “sustainable, radical socioeconomic transformation”.

The idea was born at a Social Cohesion and Moral Regeneration Summit the provincial government had hosted on 28 July, he added.

The violence and mayhem that tore through Zikalala’s province has resulted in the declaration by the province of a State of Disaster.

Finance Minister Tito Mboweni calculated that the looting and arson following Zuma’s arrest had caused an estimated R50-billion in damage.

The province, said Zikalala, was still tallying the cost and the amount sought in relief “was bound to grow” in order to mitigate the devastation caused by the attempted insurrection, planned and executed from within the ruling party itself (not that he said that).

Now members of the same party in the province are set to disperse these funds meant to “rebuild” lives and an economy almost collapsed by the insurrection which started in that very province and was cheered on by members of the ANC.

Pure doublespeak, if you understand it to mean the capacity to “hold two completely different contradictory thoughts simultaneously while believing both to be true”.

Wearing his trademark fedora hat and still ubiquitously referred to as “General”, the minister of police listed arrests made, guns confiscated, and breakthroughs achieved in the aftermath of the planned assault on the state.

The “events”, as Cele described them, had caused “horrendous damage and untold pain and trauma”. “Atrocities” had played out, particularly in Phoenix, and he was determined “to set the record straight by laying out the bare facts”.

Zikalala in turn was of the opinion that the “detailed” report by the crime, justice and security cluster “paints a picture of a government that is seized with the safety and security of the people of KZN and SA”.

Commiserating with and helping families deal with the violent deaths of loved ones as well as the loss of personal and business property, as Cele did on Tuesday, however, does not count for at least a “sorry” which the ANC owes South Africans.

In fact, it owes us more than a sorry, it owes us arrests not of the looters or the shooters only, but of the big mouths in the ANC who planned and executed the attack on a democratic state.

Cele informed the country that 36 people had died in the Phoenix violence – 30 of them shot to death, two burnt, one stabbed, one run over by a vehicle and two others after sustaining injuries during brutal assaults.

Police were investigating 52 cases of attempted murder, nine of common assault and 16 of assault with intent to cause grievous bodily harm. Four security companies in Phoenix were raided and 152 illegal firearms confiscated, while wider operations in the area had turned up a further 112 illegal firearms.

He set out how police had uncovered that on 12 July – four days into the whirlwind of violence – community members in Phoenix had set up blockades and had patrolled neighbourhood streets.

“Some set up armed checkpoints. The situation rapidly deteriorated. Phoenix became the scene of crimes. Some on the checkpoints turned to vigilantism and began racial profiling,” said Cele.

He set out how a vehicle with no number plates and four suspects “carrying looted items” had been stopped and searched at a checkpoint.

“The four suspects shot at the community. The community returned fire. They fled into the bushes. One man died on the scene and their vehicle was set alight,” said Cele.

This incident had sparked other incidents of looting, stone throwing, shootings, stabbings, road closures and the violent ejection of motorists from their cars on highways.

“Some were assaulted with baseball bats, bricks and sticks, bush knives and other sharp instruments.”

Zikalala said the crimes had been committed by “small groups of people of all races, classes and religions”.

Not a word about ANC members celebrating the mayhem though.

The worst of the “crimes”, he added, had taken place in Phoenix, Inanda, Bhambayi, Zwelitsha, KwaMashu, Amaoti and surrounding areas “in the name of protecting the community”.

The province was still in the process of compiling a report assessing the impact of the “civil unrest”, which would be forwarded to the National Disaster Management Centre.

Cele said a team of 31 experienced detectives had been deployed to arrest suspects and attend court cases.

“They have hit the ground running and one is pleased to see them working closely with communities.”

South Africans would be pleased also if the SAPS were equally enthusiastic about investigating those in their own midst who have been implicated in criminality and corruption, but alas, they remain in high office.

The role of the security industry in the “unrest” would also be investigated, said Cele.

For now, he added, “calm has returned to the province of KZN” due to the collaborative efforts of the SAPS, the SANDF and communities themselves. However, “We remain on high alert.”

He commended “those committed men and women who raised their hands to be part of the solution in the face of adversity. They stood together against divisions being sown.”

They also stood together and cleaned up the mess themselves, just in case the minister has forgotten.

The press conference on Tuesday by these government officials, while an attempt at presenting a calm face in the aftermath of a self-created storm, was about as Orwellian as you can get. DM