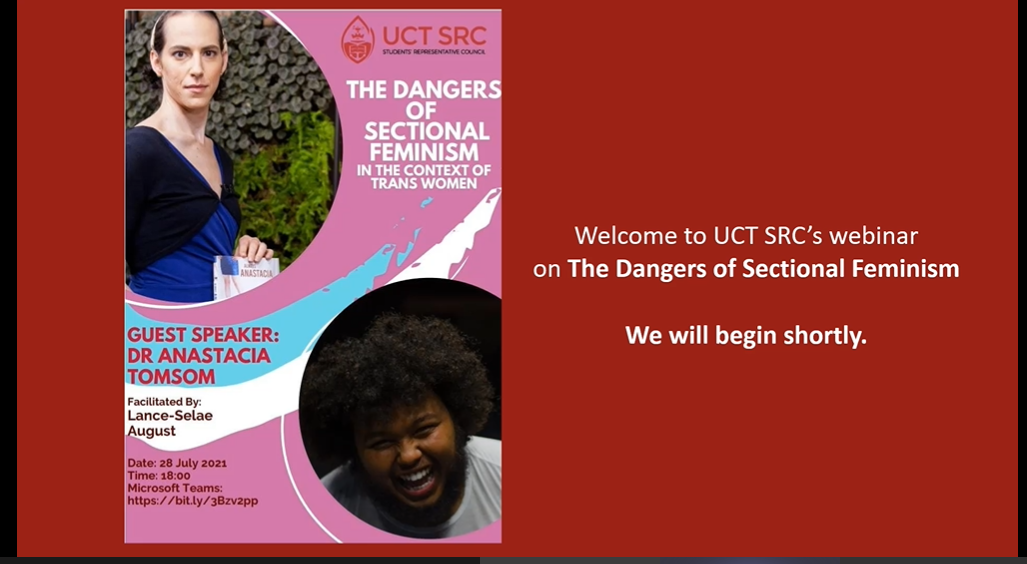 UCT’s SRC held its own webinar on ‘The Dangers of Sectional Feminism: In the Context of Trans Women’ on Wednesday, 28 July 2021.

After the University of Cape Town said it wouldn’t cancel its open lecture with acclaimed novelist Chimamanda Ngozi Adichie, who faced a backlash after being accused of transphobia, the university’s Students’ Representative Council hosted its own webinar.

“I’d like to thank everyone here who made the decision to not stand idly as people continue to propagate rhetoric that marginalises people who are already marginalised,” said Dr Anastacia Tomson at a University of Cape Town (UCT) Students’ Representative Council (SRC) webinar, The Dangers of Sectional Feminism: In the Context of Trans Women, on Wednesday.

The hour-long webinar took place as Chimamanda Ngozi Adichie spoke at UCT’s virtual Open Lecture on The Idolatry of Theory: A Defence of Storytelling.

UCT’s SRC had called for the lecture to be cancelled because of comments on transgender people Adichie has made in the past. But UCT said that cancelling the lecture would “rob us all of the opportunity to share, to express, to learn and to change our minds. The alternative of silencing, in our view, robs us all of these opportunities.”

In 2017 during an interview, the acclaimed novelist and feminist said: “When people talk about, ‘Are trans women women?’ my feeling is trans women are trans women.” Adichie received a backlash for her comments and apologised.

“She subsequently apologised… by stating that the experiences of trans women and women who are assigned female at birth have different experiences; as such, Adichie argued that trans women cannot be viewed as women,” wrote UCT’s SRC in a statement.

The SRC said that the institution was contradicting its own transformation values by hosting Adichie: “As an institution that purports to actively promote intersectional feminism through its curriculum, it is important to recognise that Adichie enhanced the divide in the feminist community with her anti-trans remarks.”

Speaking on Adichie’s comments, Tomson, who is a transgender woman,  said that what this kind of rhetoric does is reinforce narratives that transgender women are not real women.

“It plays into the idea that transgender people are inauthentic and are fooling people,” said Tomson.

“We already know that lesbian, gay, bisexual and transgender (LGBT) folk are seen as lesser and when you see someone as lesser then it becomes acceptable to be violent towards them.”

In the past few months, many have increasingly become aware of the violence inflicted on LGBT folk, said Tomson.

In April, a crowd of about 50 people marched to Parliament against the spate of murders of queer people. A joint statement by various queer rights organisations said: “Over the past two and a half months South Africa’s LGBTQI+ community has been rocked by a series of brutal hate crimes against its members. At least six lives – that we know of – have been snuffed out in cold blood.”

In discussing how harmful it is to view transgender women as anything other than women, Tomson said that it often gave rise to trans panic. This is when men kill transgender women once they find out they are transgender. They would then claim that they panicked and attacked them in self-defence, “which is a far too common occurrence”, said Tomson.

By positioning trans womanhood as inferior to cisgender womanhood and essentially making cisgender women gatekeepers of womanhood, people like Adichie are setting the feminist movement back, said Tomson.

JK Rowling is another author who has faced a backlash over what many view as transphobic tweets.

People like Rowling and Adichie will complain about cancel culture but they are the same people who still haven’t been de-platformed; instead they’ve had their voices amplified. Ask yourselves, where are the transgender people who’ve been harmed by what they say, said Tomson.

“Their harmful views don’t just affect the individuals involved in the debates, it also affects the communities at large. I know trans brothers and sisters who are still facing discrimination, who are having issues with getting new IDs and access to gender-affirming healthcare,” said Tomson.

“You don’t have to be an activist, because every breath you take as a transgender person is an act of radical resistance in a society that would much rather see you dead than succeed.” DM