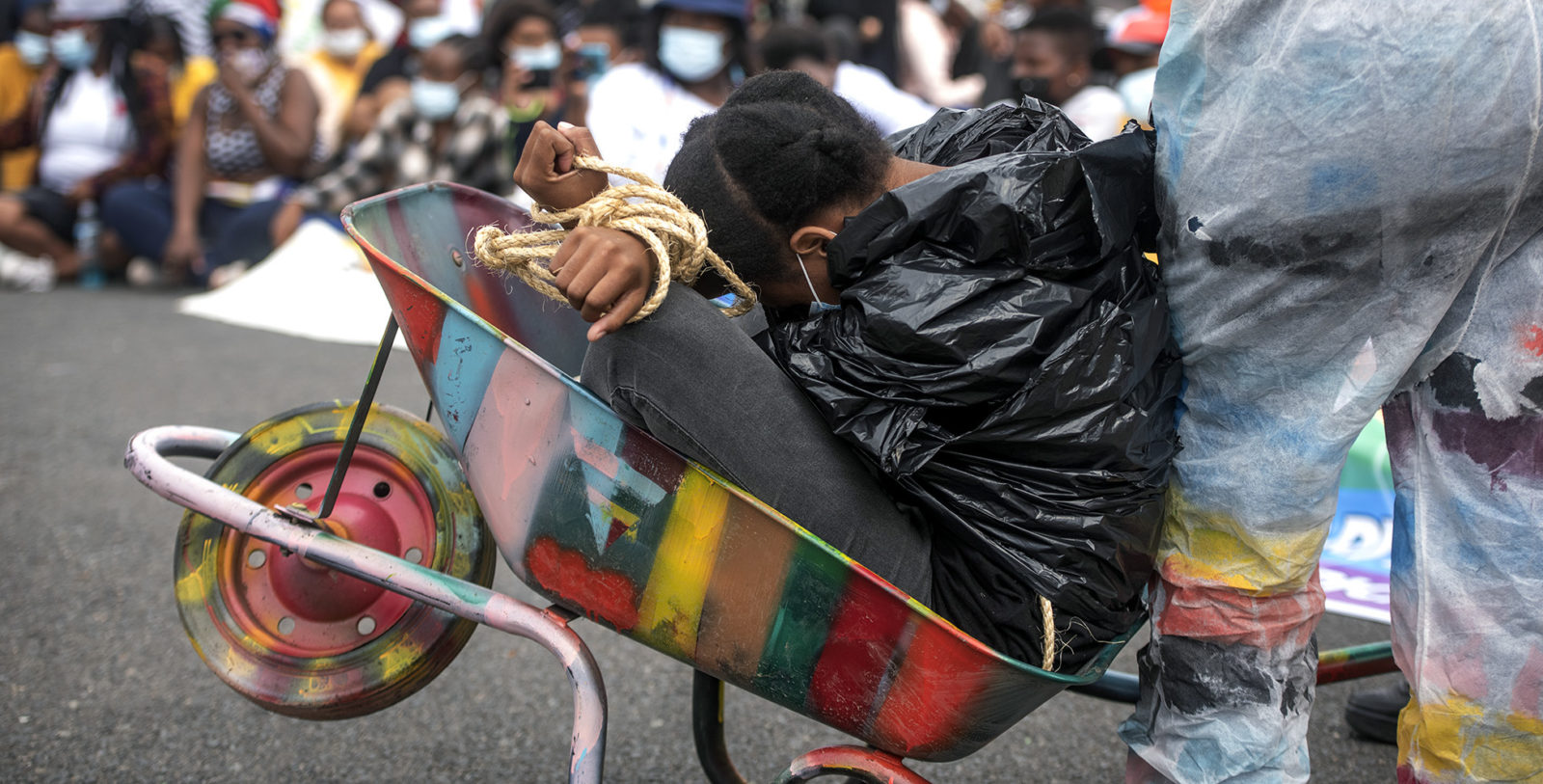 Protesters outside Parliament during the End Queer and Trans Hate Campaign. (Photo by Gallo Images/Brenton Geach)

On Monday about 50 people sat and sang outside Parliament, calling on the government to take hate crimes seriously.

Under grey Cape Town skies a crowd of about 50 people walked to Parliament with rainbow flags and posters, demanding an end to hate crimes against queer people.

Speaking to Daily Maverick, Pharie Sefale, a project manager from the Triangle Project, an NGO that advocates for queer rights, said the protest was sparked by the recent murders of Andile Lulu Ntuthela, a gay man from the Eastern Cape, this month and Lownabo Jack, a 22-year-old gay man, in Nyanga a week later.

When the group reached Parliament, the majority sat down and sang while about 15 formed a line in front and lit candles of remembrance for those who have died.

Addressing the group, Unathi Dikani, from the Triangle Project, said: “We’re not here because we have nothing better to do; we’re here because we want to be seen. We also have rights that need to be respected.”

Pumeza Runeyi from Access Chapter 2 urged the protesters to also support other cases where queer people have been murdered: “There are lots of other cases that we need to support and follow up on. We need to support each other, whether we’re gay or straight, and we also need to ensure that [these] killers are caught and sentenced.”

A joint statement by various queer rights organisations said: “Over the past two and a half months South Africa’s LGBTQI+ community has been rocked by a series of brutal hate crimes against its members… At least six lives – that we know of – have been snuffed out in cold blood.”

They included Nonhlanhla Kunene, whose body was found half-naked in Edendale, Pietermaritzburg last month, and Sphamandla Khoza, who was beaten, stabbed and had his throat slit on 29 March in KwaMashu, Durban.

Sefale told Daily Maverick the protest wasn’t only about the recent murders in South Africa, but “to also show solidarity” with queer people across the continent – including in Kenya where they are being targeted in Block 13, a refugee camp that houses 100 LGBTQI+ asylum seekers. On 15 March a petrol bomb hit Block 13 – not the first time queer people in the camp had been targeted.

And Monday’s protest, which was also held in Johannesburg, isn’t the first calling for justice for Ntuthela, Jack and other queer people. Two weeks ago the queer community was outside Parliament.

The group didn’t hand over a memorandum to parliamentary officials, but a petition demanding the government take hate crimes seriously is being circulated. Among other things, it calls on the government to “properly fund, resource and restore the functionality of failing entities such as the National and Provincial Task Teams and the Rapid Response Team that were meant to address violence against LGBTQI+ South Africans”.

By Monday morning the petition had 1,572 signatures. DM/MC