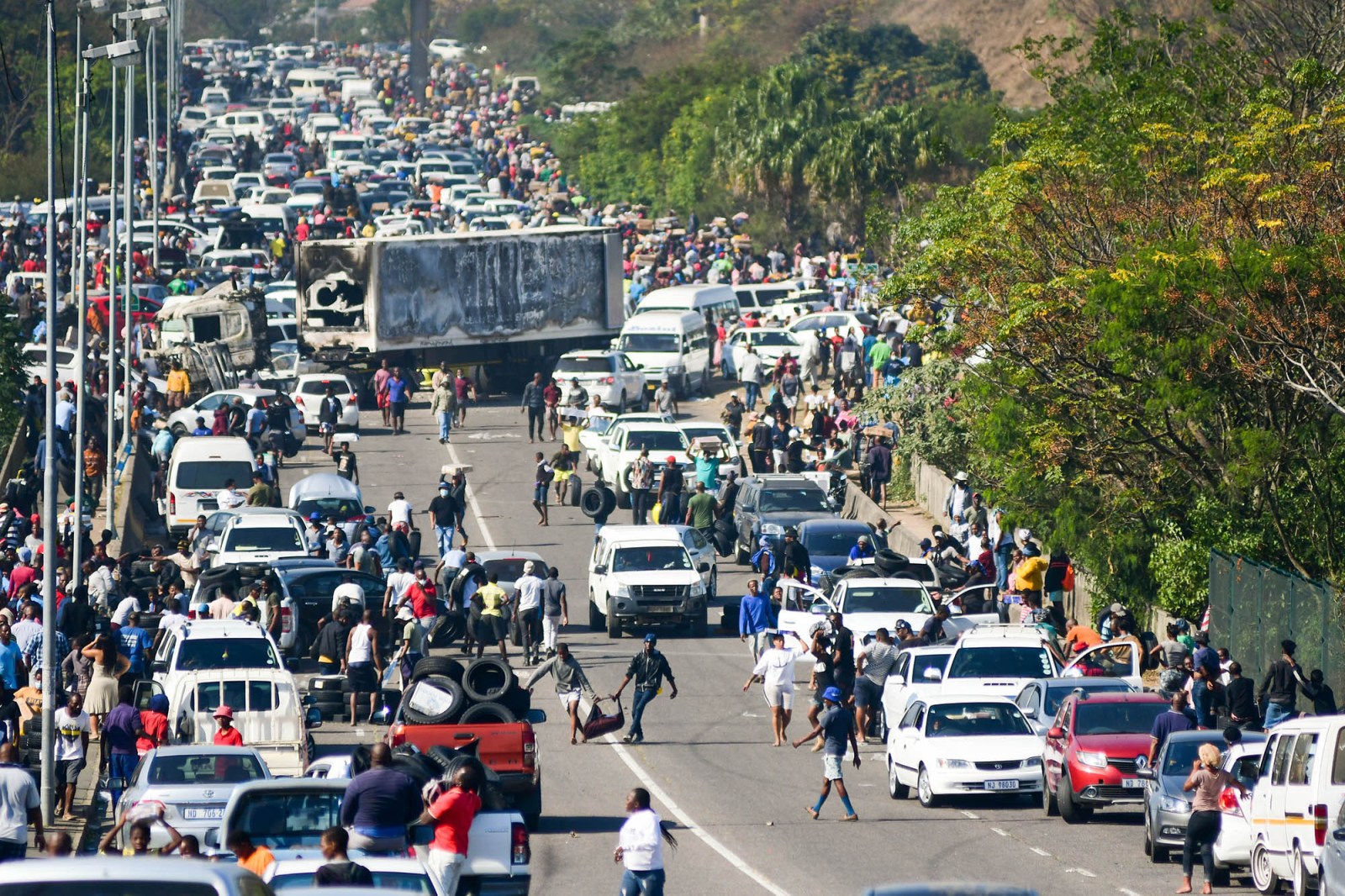 A WhatsApp group has emerged as the focal point for the eight days of riots and looting that claimed more than 300 lives and ripped R50bn out of a struggling economy.

Suspended ANC members and leading lights of the so-called RET faction, Carl Niehaus and Andile Lungisa, are the only two national figures who were part of the main WhatsApp group formed to plan protests when former president Jacob Zuma was jailed.

The protests led to the worst riots and looting democratic South Africa has seen, as organisers lost control of the campaign that claimed more than 300 lives, more than 75,000 jobs and cost more than R50-billion in economic losses.

The WhatsApp group was initially called “Free Zuma co-ordinators” but later changed its name to “Free Zuma information”. They planned numerous such groups across the country, but this is regarded as the main one by ANC activists who infiltrated some of the groups.

Parts of KwaZulu-Natal and Gauteng were hard hit by violence and looting that went on for a week. KZN was Ground Zero of the destabilisation campaigns. Activists in the ANC are compiling lists of fellow ANC members on the groups to show how a factional war in the party descended into chaos.

Niehaus and Lungisa have denied that they had a hand in fomenting the violence. Niehaus, the former spokesperson for the now-disbanded Umkhonto weSizwe Military Veterans Association (MKMVA), has threatened to sue Minister of Transport Fikile Mbalula for defamation after he named him (Niehaus) as an instigator of the violence.

But, as the graphic (below) of the group shows, both men were in the key organising group. Lungisa has confirmed this to Daily Maverick, but Niehaus did not respond to requests for comment. 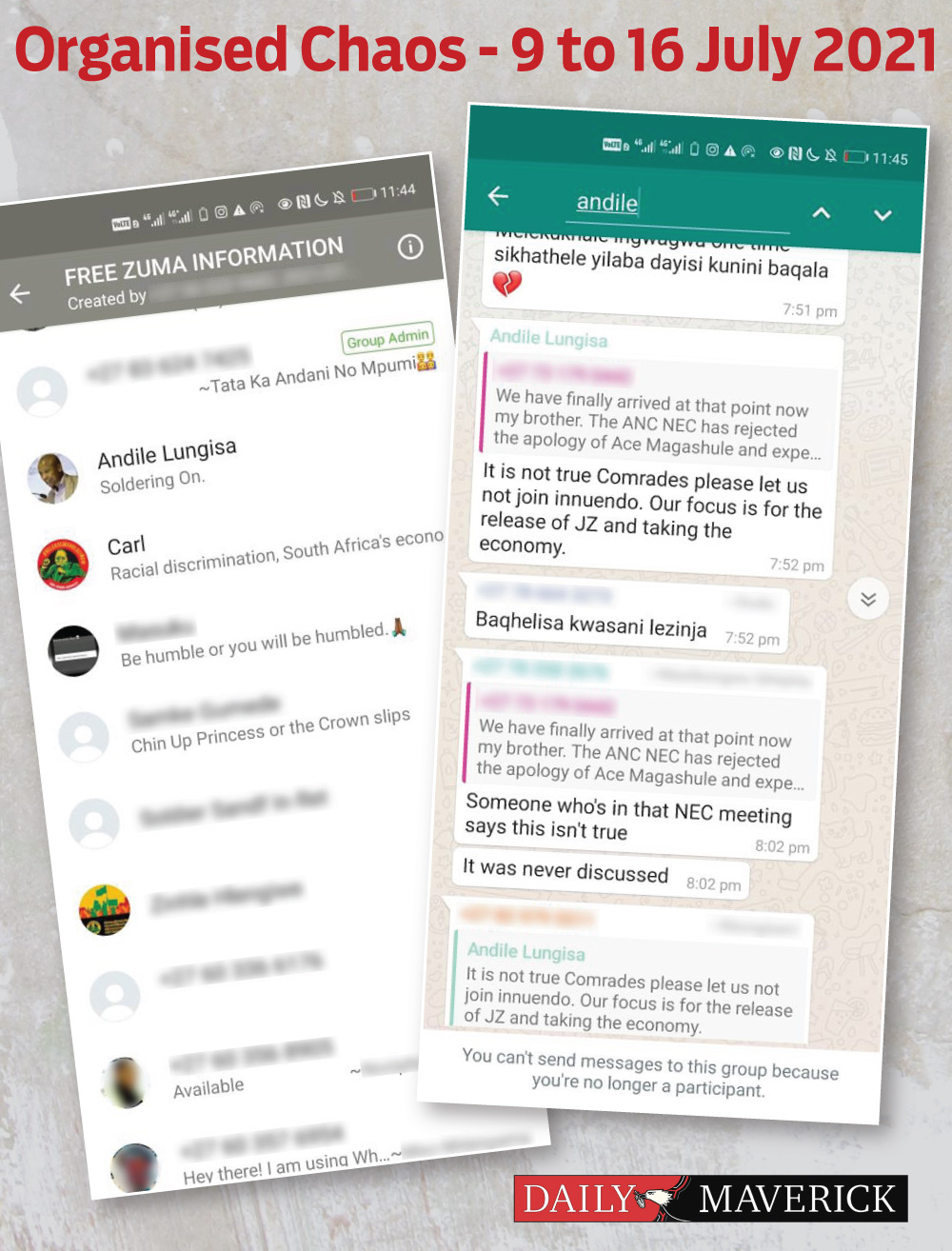 The two men did not post messages about where to go, what to loot or what to do, as other members did. Nor did they post gloating messages about “successful” freeway blockades or looting sprees, as others did.

Several individuals recorded threats of extreme violence and posted these to the group. The group was formed the day after Zuma was jailed. Lungisa’s only message on the group was to correct information about suspended ANC Secretary-General Ace Magashule.

“I am part of several ‘Free Zuma’ groups. These are groups formed by ANC and the wider national democratic movement activists who disagreed with the imprisonment of president Zuma, basing themselves on the Constitutional Court minority view.

“The Whatsup (sic) groups that you refer to were communication centers (sic) among various protests across the country. We never considered the looting and destruction of Black businesses and loss of life as ‘successes’… These riots might have been a warning shot if we as a country do not affirm the humanity of African people,” said Lungisa.

On 14 July, police minister Bheki Cele said police were investigating 12 instigators, but two weeks later there is no clarity on who these people are. On the same day, state security minister Ayanda Dlodlo said the National Security Council had received information about the specific individuals regarded as instigators.

By 20 July, authorities said that six had been arrested, but did not name them as they had not yet been charged.

On Tuesday, 20 July, President Cyril Ramaphosa said, “Special law enforcement units continue investigations into those responsible for instigating this violence with a view to speedy arrest and effective prosecution.”

On Sunday, 25 July, Ramaphosa said, “There will be further arrests of those who planned and executed these attacks.” He did not say when this might happen.

Former spymaster Thulani Dlomo handed himself over to police after being named as an instigator in news reports, but was not arrested. And former eThekwini mayor, Zandile Gumede, reported to Durban police the existence of voice-notes naming her as a ringleader.

The two known arrests are those of former Ukhozi-FM DJ Ngizwe Mchunu and Patriotic Alliance West Rand mayoral candidate Bruce Nimmerhout, who is regarded as an opportunistic political junior.

Mchunu made a fiery speech at Kwa Mai Mai market in Johannesburg on 9 July, warning of violence if Zuma was arrested. Nimmerhout made a copycat WhatsApp note (similar to those which first circulated from 9 July) calling for looting and blockades in the West Rand. He was promptly identified and arrested.

Neither is a mastermind or even what could be described as an “instigator” of the violence.

The delays in making more arrests could be explained by political considerations of an investigation that could lead police into the heart of the ANC. This could destroy the already wafer-thin unity with which the party governs South Africa.

The dynamics of the ANC in KZN is playing a role too — it is by far the party’s biggest province by membership and, therefore, its most powerful. Zuma’s jailing has had a massive impact on the party in the province and the premier, Sihle Zikalala, is under the whip. There is a confluence of political interests at play which could well explain the delayed investigation.

This report, for example, shows the 12 accounts on Twitter that amplified the message to release Zuma or face the consequences. Among them are prominent RET accounts that have previously been used to turn Ramaphosa’s presidential campaign into a scandal (the so-called #CR17 bank statements). Other accounts are usually used to build a campaign for Magashule to run for ANC president in 2022.

The WhatsApp supporters used groups to organise the riots and looting from 9-16 July, then amplified the campaign on Twitter to build popular support, as UCT’s Centre for Analytics and Behavioural Change has found.

Police crime intelligence and cyber-crimes units are reportedly studying the WhatsApp groups and the social media campaign leading up to the violence. Still, the jury is out on their ability to turn these into successful case files. This is because crime intelligence was completely hollowed out during the State Capture era, as Caryn Dolley shows here. The Cyber Crime Unit is not well equipped or resourced for new forms of incitement that technology has made possible.

These two factors, with the political considerations, means that clarity on who lit and then fanned the flames that made July 2021 a month never to be forgotten is still some way off. DM