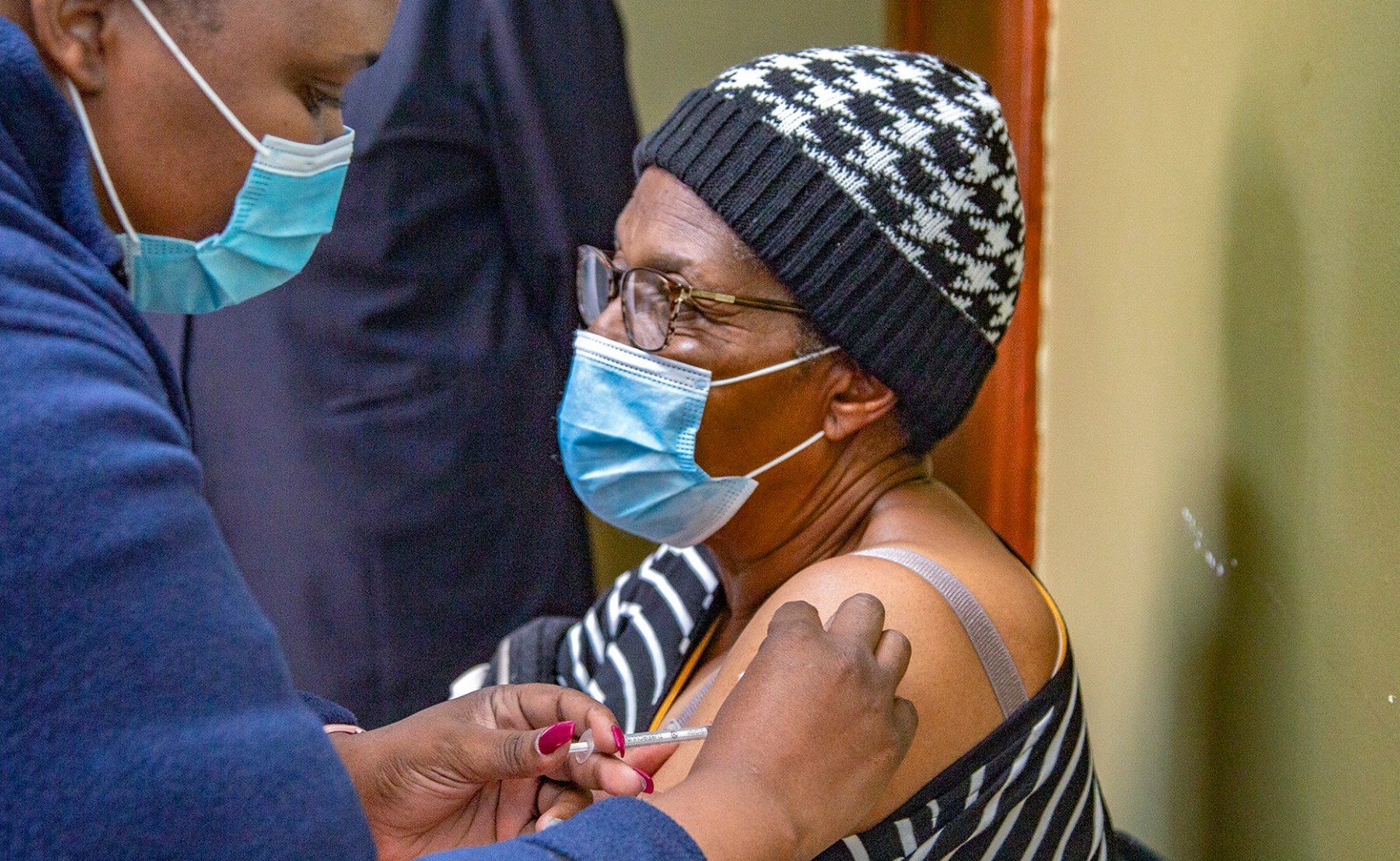 A patient receives her vaccination for Covid-19 at the Nokuthela Ngwenya Community Health Centre on 26 May 2021 in Ekurhuleni. (Photo: Gallo Images / OJ Koloti)

There is a growing narrative that blames South Africa’s slow vaccine roll-out on supply shortages, especially of the one-shot Johnson & Johnson (J&J) vaccine. It is indeed frustrating that J&J have yet to commit to specific delivery dates for the 30 million doses ordered by the South African government. This obviously makes planning difficult. A more serious problem, however, is South Africa’s continuing failure to use the vaccines it has — including the J&J vaccine doses already in the country, and available for use.

The graph shows the use of vaccines delivered to South Africa (using data from the national Department of Health). The red, dark blue and blue segments show the number of doses that have been used, on a cumulative day-by-day basis. The light grey section of each column shows estimated wastage. The orange and light blue sections show the number of doses that were available for use each day since the start of the roll-out of the government’s programme on 17 May (taking into account time for delivery to vaccination sites). The dark grey sections at the top of each column show doses in the country that are not yet available for use.

South Africa has plenty of unused vaccines. This is clear from government information about vaccine deliveries and vaccination rates. As of 20 July, just over one million people had been vaccinated with the J&J vaccine (almost half of whom had been vaccinated in the earlier Sisonke trial, that is prior to the national roll-out). This implies that there are almost one million (980,000) doses of the J&J vaccine sitting unused and available somewhere in South Africa. At the average pace of vaccination over the past two weeks, we could continue vaccinating for three months before running out of Johnson & Johnson vaccine.

We clearly should be speeding up our vaccination roll-out, and not taking refuge in the misleading “we are short of vaccine supply” argument.

The roll-out of Pfizer vaccinations is much faster than for the J&J vaccine. Elderly people are coming back for their second doses whilst vaccination is in practice now open to anyone over the age of 35. People are queuing up for vaccination. About 650,000 vaccinations are being delivered per week. We currently have 1.1 million doses available, and Pfizer is expected to deliver two million additional doses this month [i.e. in July]. Clearly, the pace of vaccination can be accelerated.

In short, South Africa’s problem right now is not supply — it is delivery. Our workplace vaccination schemes appear to have been much slower than expected, though the vaccination of prisoners with the J&J should help boost numbers. We urgently need to find additional ways to reach large numbers of people, especially in the rural areas.

How long will it take the government to reach its target?

The government is currently vaccinating fully the equivalent of fewer than half a million people per week. At this speed, it will take until early 2023 to fully vaccinate the entire adult population, as the government originally promised would be done by early 2022.

When pressed, government officials and sympathetic commentators acknowledge that the roll-out needs to accelerate. But they don’t appear to know how to achieve this.

Where are the vaccines?

One obstacle to the faster use of vaccines is that they are not where they need to be. Unfortunately, the national Department of Health (NDoH) is tight-lipped on how vaccines are allocated between the various “pipelines”: The “public sector” (meaning the provincial health departments and the sites under their direct control), the “private sector” (meaning primarily the private hospital and pharmacy chains) and “occupational groupings” (such as the South African Police Services and some private companies).

We cannot help but wonder why there is so much secrecy over this. What are they hiding?

Without good data on where vaccines are sitting unused, civil society cannot begin to hold to account either the provincial health departments or the private sector players that are underperforming. Perhaps this is why the NDoH and Nicolaou do not want to say where the unused vaccines are piling up.

Without more data we also cannot tell just how inequitable the vaccination roll-out has been. Kate Alexander and Bongani Xezwi suggest that the rollout has been inequitable, failing to reach many of the elderly people who are most vulnerable to Covid-19. But the NDoH is not making available sufficient data for civil society to assess who is and who is not being vaccinated and we doubt that the NDoH has sufficient capacity to analyse their data “in house”.

The relaxation of the government’s “prioritisation” plan is a mixed blessing. Yes, opening vaccination up to young people means that more people will be vaccinated quickly. But the risk is that the rising pace of vaccination obscures the fact that less than one half of the over-60 population has received a single dose of Pfizer and only 10% have received both doses. In our enthusiasm to vaccinate as many people as possible, we must not overlook the fact that the people who really need protection against Covid may be left behind. DM