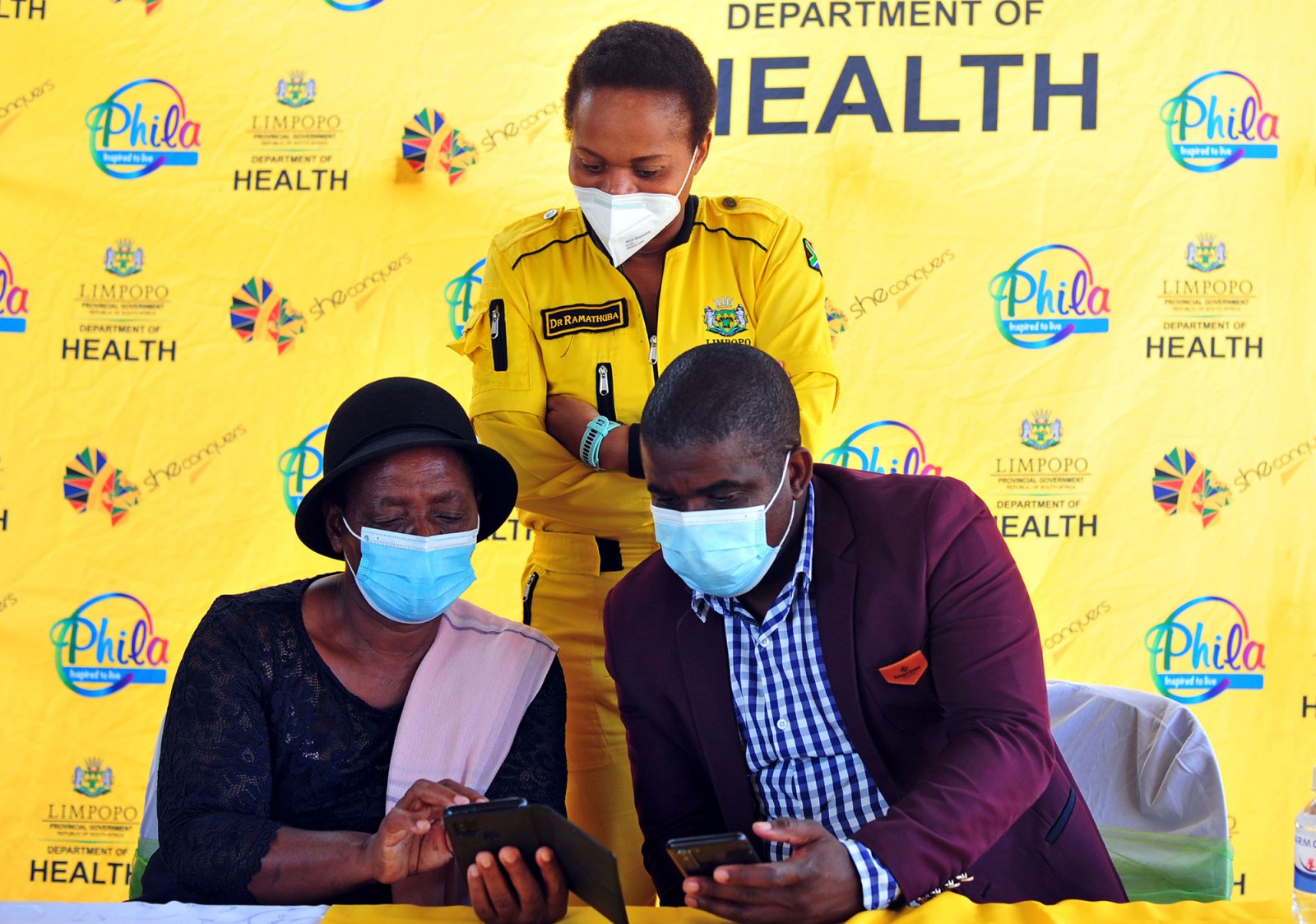 The health MEC in the province, Dr Phophi Ramathuba, says they are currently vaccinating up to 17,000 people a day but have the capacity to vaccinate almost double that number – up to 30,000.

Taking digital registration door to door, working with local leadership and a people-centred approach is driving Limpopo’s lead in the country’s vaccination roll-out amid disarray and a massive backlog in the national health department.

The province has stepped up its roll-out by prioritising the elderly and illiterate. Limpopo’s health department reports that it has registered more than 80% of people in this group, through its door-to-door Electronic Vaccination Data System and community healthcare workers.

The province’s Health MEC, Dr Phophi Ramathuba, said the breakthrough with the people and increase in vaccination numbers could be attributed to careful planning and tailor-made solutions for what is largely a rural province with strong cultural, religious and traditional beliefs.

“The big game changer for us was the intense outreach work we did after feeling the heat in the period that followed the Christmas period when the SARS-CoV-2 emerged,” said Ramathuba during an oversight visit on 30 June at the Lwamondo Clinic in the Vhembe District.

“The people [who] were among the first to be vaccinated were the bishops of all the churches, the Queen Mother of the Bapedi and other royals, traditional leaders and healers. We did this purposely so, because we understand the unique context and people of Limpopo and that when people see their local leaders being vaccinated, they would follow suit because they identify with them,” said Ramathuba.

She added that the province gave an undertaking to increase its outreach vaccination programme to villages and homes of the senior citizens “so that we [can] speed up the vaccination process”. Last year Limpopo was thrown into the international spotlight when it hosted a group of 121 South African citizens evacuated from Wuhan in China, shortly after the outbreak of Covid-19 in the country.

The pressure to increase the number of vaccinated citizens and to improve SA’s herd immunity takes place in the context of rising numbers of Covid-19 infections dominated by the more transmissible Delta variant, which resulted in a move to Adjusted Alert Level 4 lockdown for 14 days from 28 June.

Experts say the Delta variant is able to spread much faster and more easily between people than the other variants. The cumulative number of Covid-19 cases reported in South Africa as at 30 June was almost two million, with Gauteng the worst hit.

During the past few months, the national Department of Health has come under fire regarding the slow registration progress of people over the age of 60.

Ramathuba said she realised a change in strategy, particularly at the provincial level, would be required, given that the government had in the previous phase struggled with the online registration and to vaccinate healthcare workers on time.

“After Phase 1 of the roll-out, we noted that the province could not solely rely on online registration. We brought in the support of youth community healthcare workers, who were deployed to register the elderly door to door, and with this strategy we have managed to register 80% of the illiterate,” said the MEC.

Ramathuba said she had noted an overwhelming demand for the vaccine especially in rural areas and that people were coming out in their numbers to be vaccinated.

“The large majority of people over 60 in Limpopo do not know how to read and write. Our province is rural and has no network, so we had to look at a people-centred solutions approach … to make sure the vaccine gets to the people.

“We couldn’t just take the instructions as received from the national government but had to tailor-make our unique plan that responded to and suited the province’s material conditions,” said Ramathuba.

The chairperson of the South African Medical Association (Sama), Dr Angelique Coetzee, said other provinces could learn from Limpopo’s example and commended it for bringing its vaccination sites closer to the elderly and the farthest rural areas.

“Sama is very happy to see that Limpopo is leading with the vaccination roll-out for the elderly. It just shows that there’s better communication with this population group, [plus] the roll-out seems to be more efficient. The sites that have been allocated to them are also closer to these patients, so we can see that it’s all about the availability of the sites and vaccine, as well as the timeous communication with people,” said Coetzee.

During her visit to Letaba Hospital in Mopani District on 3 May, Ramathuba indicated that the department would be able to continue with Phase 2 of vaccination of senior citizens despite the backlog of healthcare workers.

The Democratic Nursing Organisation of South Africa (Denosa) said that even though Limpopo had managed to vaccinate the majority of its nurses, their worry was still the speed at which the vaccination roll-out was going.

“We know that we could be doing much better, and the control processes on the ground are an issue for us because … nurses [who] are being used at the vaccination sites are taken from healthcare facilities that are already under-resourced, that have staff shortages and are under strain. While we commend the MEC and the department for the increase in vaccination sites, we still want answers as to when the MEC will address the gross shortage of nurses and adequate healthcare infrastructure in the province,” said Denosa’s provincial chairperson, Lesiba Monyaki.

But Ramathuba said the unions were well aware of the budgetary constraints facing the department where the permanent hire of nurses was concerned, citing that more than 300 nurses had been hired specifically for Covid-19, that these were still in the employ of the department – and that the province had more specialists than it has ever had before.

“The big elephant in the room we need to address with the unions is a headache for us all, but the unions need to also understand that we don’t just need managers but also foot soldiers to do the work that needs to be done, especially in this pandemic,” said the MEC. Mukurukuru Media/DM168