Why Afghanistan is another Vietnam — and why it is different 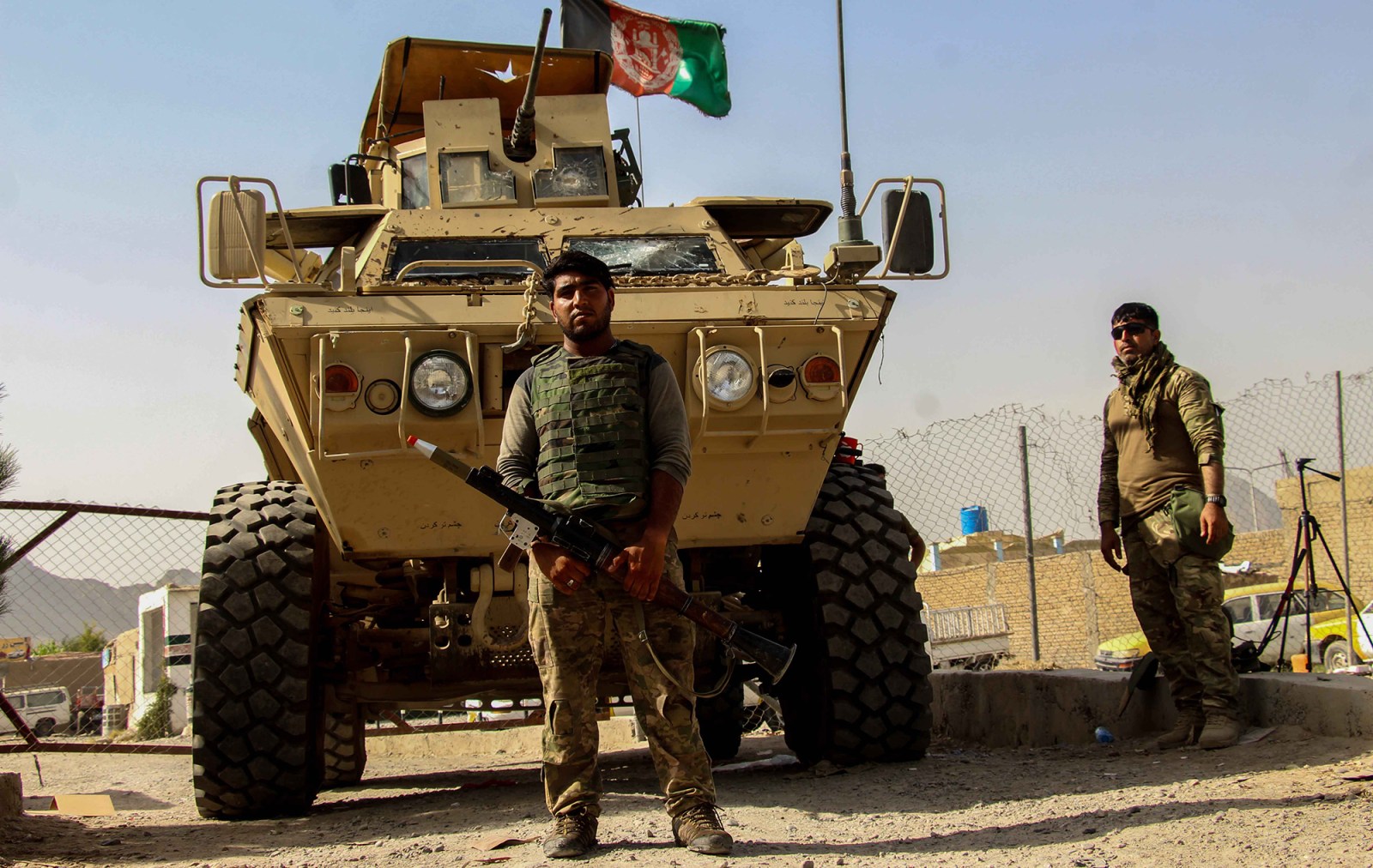 Afghan security forces at a checkpoint near the Spin Boldak border with Pakistan, on 14 July 2021 after the Taliban captured the district in Kandahar. (Photo: EPA-EFE / M Sadiq)

The rapid withdrawal of US forces from Afghanistan echoes the US military’s destructive exit strategy from Vietnam. As was the case in Vietnam, the US failed to understand their allies and enemies in Afghanistan and managed to get the politics fundamentally wrong in both wars.

Dr Mills, who served four assignments with the International Security Assistance Force in Kabul and Kandahar, has been researching in Afghanistan. His new book Expensive Poverty: Why Aid Fails and How It Can Work (Picador) is out in August.

“Politics cannot be separated from war, nor war from politics,” observes Fredrik Logevall.

His reflection on the contribution of war correspondent Bernard Fall to the conflict in Vietnam has resonance with other, so-called limited wars. “Political considerations do not cease abruptly with the onset of war,” writes Logevall, “and military considerations can never be far from the politician’s mind, even in times of peace.”

An Austrian Jew, he sought refuge from Hitler’s Germany and became a French resistance fighter, went to America, obtained a doctorate in political science, wrote six books and spent his life in the field.

He became famous for digging out facts through fieldwork rather than pontificating from the safety of his sitting-room, office or college library. Unsurprisingly, he was willing to swim against the stream of prevailing opinion, such as over the war in Vietnam where he warned that America, like France, was losing. His message, conveyed in his seminal Street Without Joy and the searing volume on the siege of Dien Bien Phu Hell in a Very Small Place, was that states lose wars because of a failure to grasp the mentality of the very people they are trying to help.

The conventional argument is that a combination of anorexic Western forces, weakened by US resolve (“We don’t do nation-building” argument and fear of being sucked in a la Vietnam) plus the distraction of Iraq, undermined the Afghan “project”.

As the Taliban makes rapid gains across Afghanistan in the wake of the American military withdrawal, amid fears of a “high-speed Saigon” evacuation, there are several key differences between Afghanistan and Vietnam.

For one, South Vietnam did not countenance democratic elections. By contrast, the Afghan government, and not the Taliban, welcomes elections, as these could assist in cementing its legitimacy. Whereas the Vietnamese nationalists were fighting to unify Vietnam, the Taliban’s purpose is essentially, points out Afghanistan Vice President Amrullah Saleh, “to divide Afghanistan. While the Viet Cong were popular, the Taliban was never popular.” And, he argues, while the North Vietnamese were left with little option but to fight for their liberation, “the Taliban are fearful that they will fade away without fighting”.

But there are similarities in the American approach to their allies in both instances. These undermine Washington’s moral authority.

In both instances, the US negotiated a separate peace with their enemy without the inclusion of their erstwhile ally. This left Saigon and, now, Kabul fighting that enemy. The timing of this peace was badly off: rather than negotiate with the Taliban when it was weak, it did so when it was resurgent.

At its core, the international community failed, until very late in the day, to understand the political character of Afghanistan’s conflict. The mood of vengeance in the United States after 9/11 meant it was in no mind to make peace with the Taliban and bring about an inclusive settlement.

Rufus Phillips, a Vietnam hand, described the difference between American views and local aspirations as a “fog of incomprehension”. The same chasm of misunderstanding applies to Afghanistan, not least in identifying a political cause other than the removal of the Taliban that the Afghans could agree on and Americans believed was worth fighting for.

There is a critical human dimension to both wars. In Afghanistan, outsiders have generally failed to grasp the Afghan ability to cut deals in ways that allow them to compete for power and cooperate to make money at the same time.

These failures reflected a lack of understanding of the Taliban and of Afghanistan per se, coupled with a tendency to caricature and a consequence of poor planning and limited patience. “I felt like we were high-school students who had wandered into a Mafia-owned bar,” said General Stanley McChrystal on his arrival in Afghanistan in 2002. It was stated in US policy that they didn’t do nation-building. It was all, initially, about bear hunting, at least until the West realised that they could not safeguard their interests without securing a friendly government in Kabul.

Just as the US failed to build a nation in South Vietnam, with a cause equal to that of the North, it has failed to do so in Afghanistan. Its solutions, strategy and tactics have not worked well enough. The Taliban calculus could have changed if the West had signalled it was there for the long haul, like Korea. They were more likely to commit to a political solution if faced with the prospect of a long-term military stalemate instead of using it as a ruse to buy time.

The West also failed to appreciate the extent to which Afghanistan’s politics were personal and tribal rather than national, and the degree to which regional influences matter. This should not downplay Afghans’ own role in their misfortune, or Washington’s preference to ignore the obvious political frailties as it sought to paper together a cohesive Afghan system without a peace settlement.

The final Vietnam echo is in the method and consequences of US withdrawal. If it wanted to leave, that choice would have had to be grudgingly accepted by the Afghan government, but not the manner of its departure. The West’s attempts to escape its moral obligation to the people of Afghanistan will have consequences, not least in the value of its promises, and certainly not least to the millions of women now at the mercy of the Taliban’s theocracy.

This impact on Western authority is compounded by the history. Islam was instrumentalised and weaponised by the United States to help to bring down the Soviet Union in Afghanistan in the 1980s.

As in Vietnam, the US negotiated to enable retreat, not victory.

In both Vietnam and Afghanistan, a failure to understand their allies and the enemy and the character of the conflict took Washington down the wrong road. In both, it fundamentally got the politics wrong.

Like South Vietnam, it’s now up to Kabul to manage the mess, pain and uncertainty of the Western withdrawal. While there was a Western-centric environment for 20 years, from the pursuit of strategic issues including diplomacy to a tactical approach that involved spreading out Western bases and a dependency on airpower, Kabul is now, quickly, going to have to make another plan.

Existentialism forces dramatic action — or, without it, dramatic failure.

Fall died on 21 February 1967, after stepping on a landmine near Hue while accompanying marines on a mission. He was just 40 years old.

Viewed with hindsight, his insights are remarkable and ring true even today. Externally directed strategies for recovery need to be consultative more than prescriptive, organic not generic, political not technical, less quantitative than qualitative, strategically intentioned rather than simply tactically focused. Steadfast honesty, studied informality, a driven sense of purpose and the willingness to make huge personal sacrifices and commit incredible energy and effort in the pursuit of these goals are all imperative for success.

There remains one big, possible difference between the two circumstances. Should Kabul now take the fight successfully to the Taliban, which will be necessary for a ceasefire and a negotiated settlement, Afghanistan will be no South Vietnam. DM