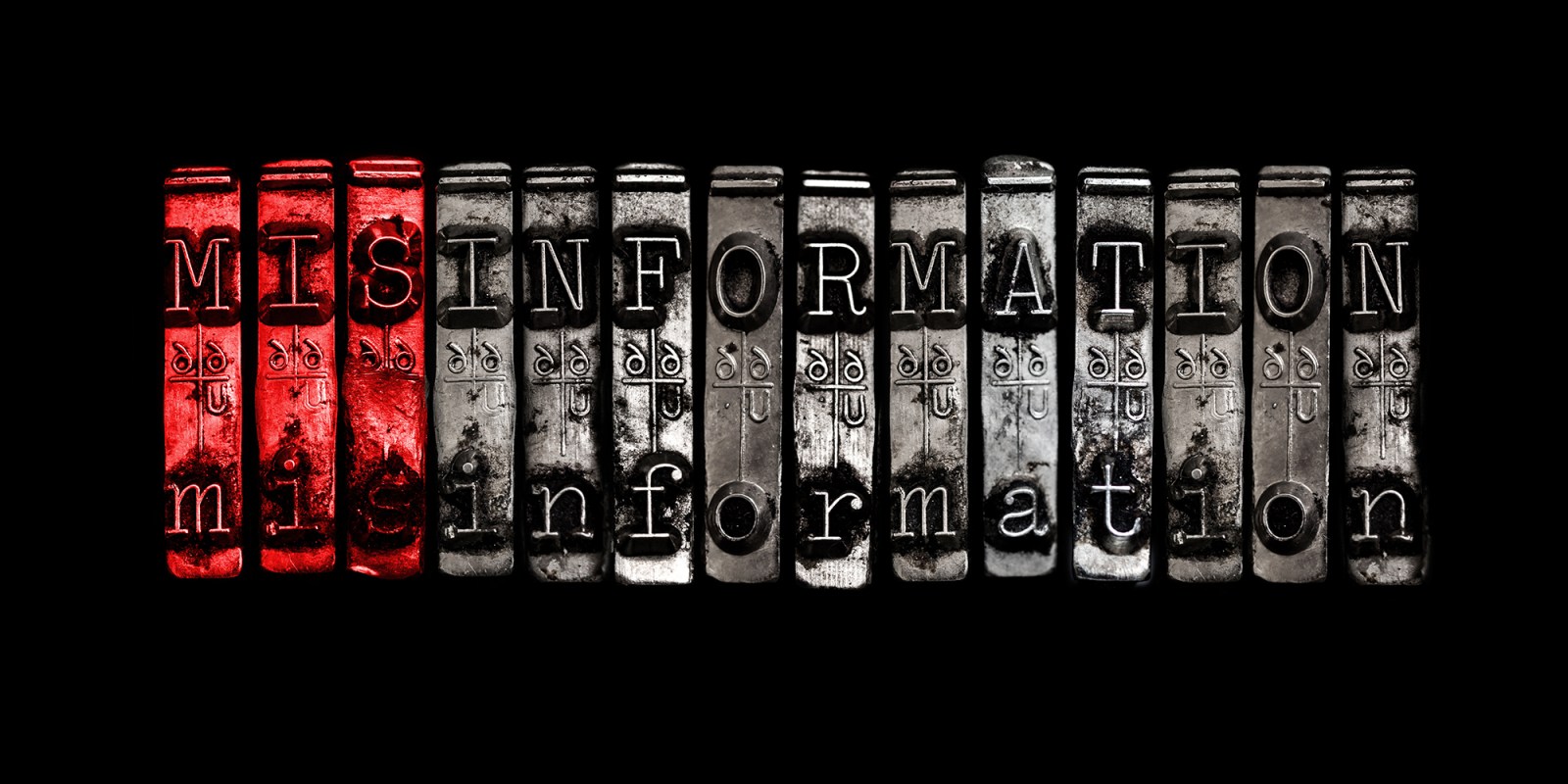 As we begin to come to terms with the horrific events of last week, one aspect highlighted by many has been the role of social media in the violence and looting. This week we look at some of the content, the difference between incitement and instigation, and what can be done.

Last week was paradise for those who like to heighten fear, generate panic, and fuel anger and hatred. Every week we have noted how misinformation and disinformation thrive in a time of heightened tensions, uncertainty, anxiety and change. It’s a core reason why disinformation has been spreading during the pandemic. While it is difficult to directly link the violence and looting to some of the disinformation, what is clear is that it certainly helped to legitimise it. Let’s look at one example. 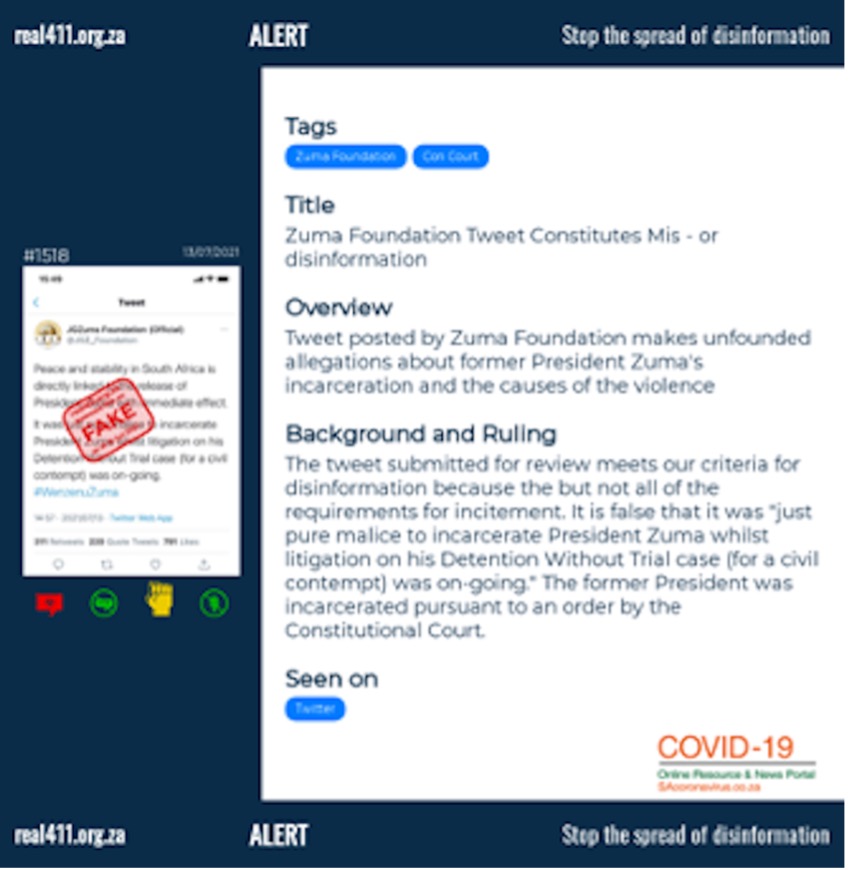 The myth, spread on twitter and that continues to be repeated, is that former president Jacob Zuma was arrested and detained without trial, and that his rights were violated. We recently showed how an aspect of the Constitutional Court ruling was also about disinformation being disseminated by Zuma. Just like vaccine denialism, it’s not hard to disprove the disinformation. Read the actual judgment, follow the process. Of course that doesn’t suit the end game of those pushing the disinformation, so they have also sought to discredit the courts.

Over the week we had many calls asking what could be done about those who were inciting the violence. There are a few answers. First, there is the legal route, which has the advantage of ensuring that perpetrators can be convicted and possibly imprisoned. It has the disadvantage of being slow and resource-intensive and doesn’t necessarily result in harms being mitigated or reduced.

Two years from now, even in a best-case scenario, few will recall the actual social media post. However, the legal response is still one of the most effective means of holding people accountable for their actions.  If indeed content does constitute indictment to violence, a person can be charged under the Riotous Assemblies Act, but, like any judicial process, the tests are rigorous and guilt needs to be proved beyond a reasonable doubt.

This piece unpacks some of the issues around incitement and the recent violence. Certainly, in those cases where people did incite violence they should be charged and brought to justice. The test for incitement in our law is, however, high – and rightly so – and the same principles are applied by the Real411 system.

In this piece we looked at some clear cases of incitement. Still following the legal possibilities, another route may be to pursue the crime of instigation:  those who were involved in supporting the violence may not have actively incited violence, but they may be found guilty of instigating others to commit violence.

What constitutes instigation?  This definition offers some guidance:

“In common language, instigation carries the negative connotation of influencing somebody to do something bad or inadvisable. And indeed, similarly, the concept of instigation has been applied in the prosecution of international crimes in order to capture the criminal responsibility of those who, even though not carrying out any elements of the crime themselves, have psychologically prompted other people to perpetrate such crimes. “ (Cambridge University Press)

One of the most shared and widely critiqued users on Twitter has been Jacob Zuma’s daughter Dudu Zuma-Sambudla. As the violence erupted she issued these tweets:

While on the surface there is no clear call to say “go burn”, or active incitement, the use of the power fist emojis, “Amandla!”, the repeated use of “we see you” and referring to the violence as “Flames of Freedom” makes it clear that the user is, at the very minimum, condoning the violence. There may well also be a case to suggest that she was also instigating, or through her seemingly delighted responses, “psychologically prompted other people to perpetrate such crimes”. That it was not just one or two posts actively condoning the violence, but a string of them, in our view makes the content all the more egregious. Another example that covers the difference between incitement and instigation can be found here.

Another possible route to stamping out inflammatory content is that followed by Real411, which is to report and raise awareness of the issues, and mitigate the harm they cause. The advantage of this approach is that it is fast, (Real411 volunteers have been acting on urgent complaints and where necessary takedown requests have been issued and acted upon by the platform in a matter of hours), empowers the public to do something about digital harms, and costs the public nothing. It also enables such content and its spread to be mitigated, thus reducing the harm caused. The disadvantages are that the system cannot hold individuals accountable, or lay criminal charges, and it can only act on content reported. It also has no authority over the platforms, so we cannot be sure that where a takedown notice is sent that it will be removed.

Over the last week we saw a spike in complaints, 15 of which were about incitement. Three accounts reported were either temporarily suspended or blocked, and one account (including six linked accounts) was permanently suspended. A system like Real411 also enables people to look at the examples and gain a better understanding of why some complaints didn’t meet all the criteria. As much as we want to act against those who incite violence, spread hate speech or disinformation, we also need to ensure that freedom of expression is protected.

A third route to action on the content is a political one. While much of the content we have seen may not be illegal, and while it may not have been removed in many instances, it is at the very least grossly irresponsible. If we look at the content of the tweets by Zuma-Sambudla listed above, even if they don’t meet the criteria for incitement, that they condone and celebrate the violence is difficult to dispute. Violence doesn’t just beget violence, violence of the kind we saw also undermines our democracy. We have seen targeted attacks on community media, where violence was used to silence voices in the community. As such, any political figure who doesn’t actively condemn the violence and work to de-escalate tensions is undermining democracy and the very institutions that give them their power.

Suggestive or inflammatory content is dangerous and there is a fine line between content being inflammatory and content being incitement, and as we have seen from the examples listed above, we cannot afford to simply sit back and allow users who post inflammatory or suggestive content, or content that instigates violence, to not be held accountable. Often this content encourages or enables disinformation to be spread with ease and to thrive during a time of heightened emotions and mistrust.

As we head towards elections, it’s one of the few times politicians will want to be seen to be listening to what we ask. We need to demand that they condemn violence and act swiftly and strongly against any member  of their party or institutions that condones, instigates or incites violence.

It is critical that we all play our part in combating and mitigating these digital offences. If you suspect that content could be disinformation, hate speech, harassment of journalists or incitement to violence, report it to Real411. To make it even more simple, download the Real411 mobile app.

Again, we remind you: We are approaching that magical period where political parties need to show us that they care, so in addition to asking about what they will do in your area, ask them to issue one public statement a month in the lead-up to elections that highlights and condemns any attacks on our journalists AND then to demonstrate what action they took to help combat that. If they are edgy or push a nonsense agenda don’t vote for them because they don’t believe in democracy. DM