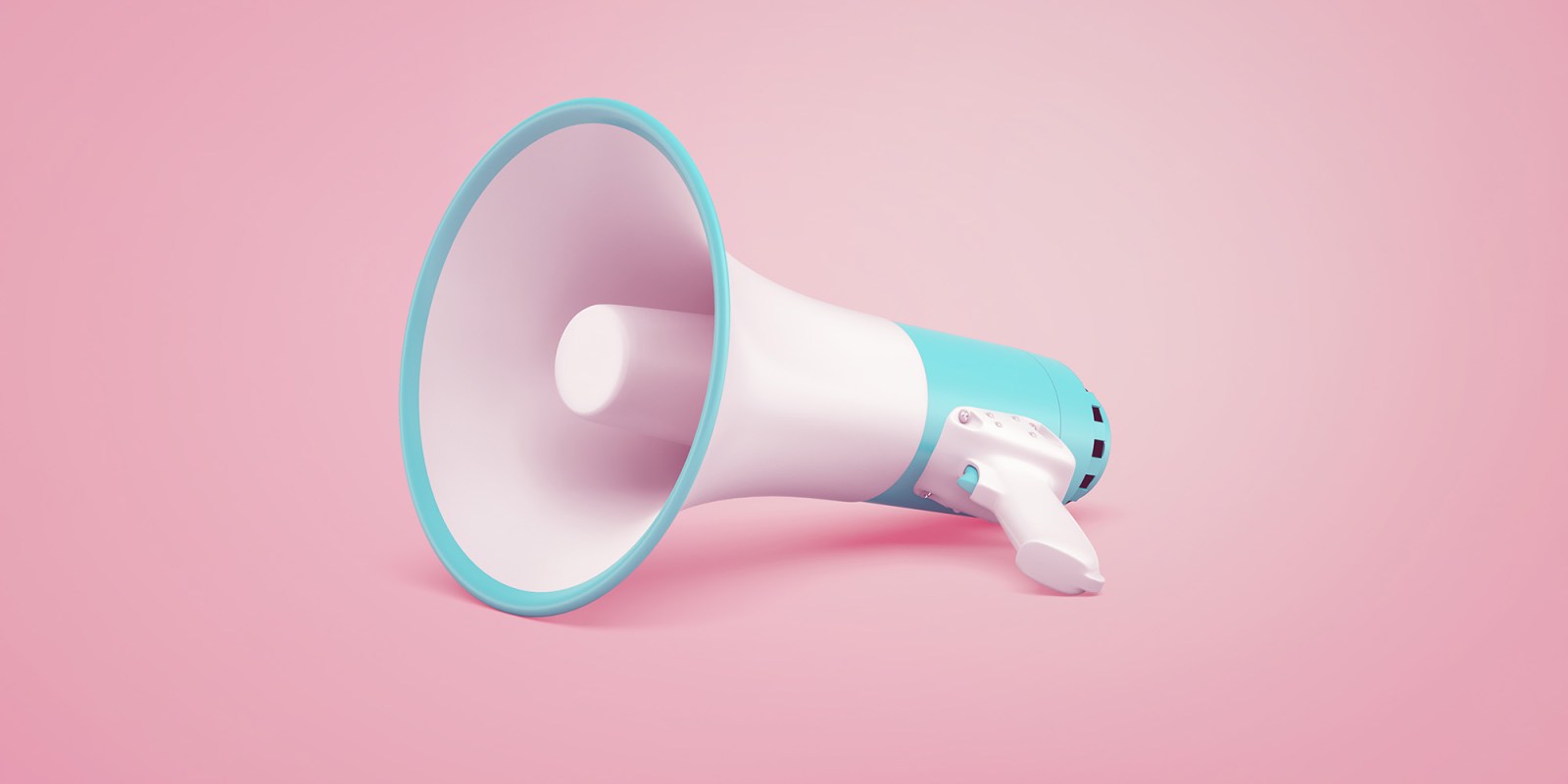 As the Covid-19 pandemic continues to wreak havoc in our country, those who seek to cause confusion, chaos and public harm have powerful tools of mis- and disinformation to do just that. This week, we look at a series of complaints that constituted digital harms, and what was done about it.

Week 18: An exercise in hate

Over the past week, as we continued dealing with largely Covid-19-related disinformation (about how those who promote vaccines are guilty of a silent holocaust and other such denialists fodder), another set of complaints highlighted an even more crass expression of hate.

#OperationDudula. In essence it was a plan to forcibly remove non-South Africans from Soweto. This plan was set to take place on Youth Day. There was some coverage of it, in New Frame and Daily Maverick. As with most protests, there were divergent views as to why it was taking place and what its main purpose was. To a large degree it appears it had some legitimacy but also used the scourge of crime and drug abuse to clothe what seemed to be naked Afrophobia. On social media the purpose was all too clear – to remove foreigners by force.

This week we look at what made these posts cross the line to digital harm, what Real411 did about it and what happened thereafter. It’s a story with some light at the end, so keep going beyond the obvious hatred.

A few weeks ago we looked at how the different platforms dealt with hate speech and incitement. Many of the posts relating to “Operation Dudula” meet the criteria. While some may arguably meet only some criteria for hate speech, most of the posts clearly met the criteria for incitement. The posts were spread across Twitter and Facebook, and appeared to be driven by the poster that made for easy sharing and xenophobic comments. 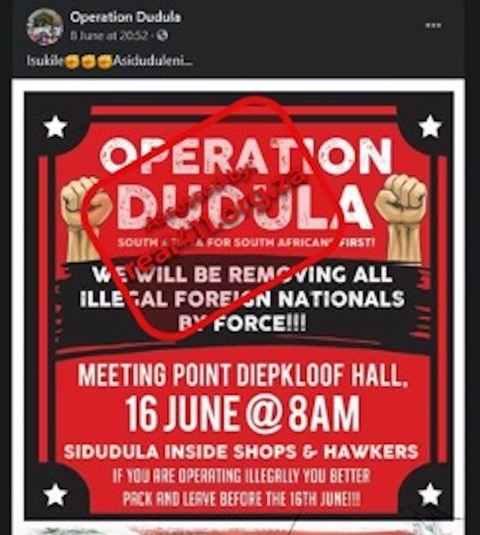 It’s helpful to compare this against some other Afrophobic content we have received to help show how one clearly constitutes incitement, but the other doesn’t.

This post (complaint #1392) was found to be disinformation, but didn’t meet the criteria for hate speech or incitement. The post is clearly Afrophobic and xenophobic. It inaccurately and falsely states that “illegal immigrants are raping, trafficking and killing South Africans daily if not hourly”. It then refers to “bloody foreigners” and for good measure, in case we weren’t sure where they stood, they use the xenophobic #putsouthafricansfirst hashtag. 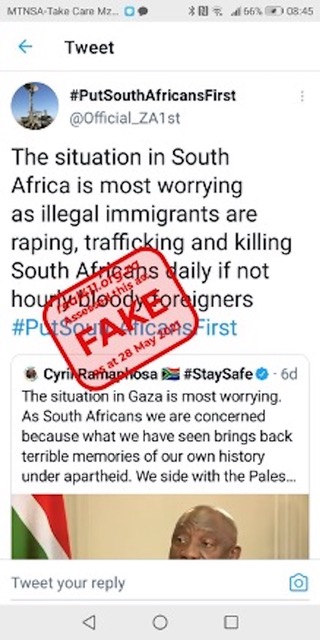 While the content may fall foul of some of the platform’s own community standards, the South African criteria have a higher threshold. For Real411, we include advocacy of hatred and incitement to cause harm, and it must be based on one of the protected characteristics. So while the advocacy of hatred might be met by suggesting illegal immigrants are all criminals, rapists and traffickers, and linking it to the openly xenophobic “PutSouthAfricansFirst” hashtag, the incitement to cause harm is not present. Returning then to the “Operation Dudula” poster.

The link and reference to PutSouthAfricansFirst, while not overtly saying we hate non-South Africans, has had enough traction on social media and is used to push an openly xenophobic discourse. Knowing that the expression has come to be openly associated with xenophobia and Afrophobia, it isn’t necessary in that case to have it openly declare “we hate foreign nationals”; it is already effectively stated with the use of the phrase.

The other content clearly links non-South Africans with criminal activity, and also links their possible undocumented status to them being criminal as well. Contrary to the views articulated in the reporting on the events, had the march just been about combating crime, there need not have been any mention of the nationality and status of those being targeted. These factors make it clear that the post is targeting non-South Africans, as a protected group, based on their nationality. Thus, while the Afrophobia may not have been as clearly expressed as it was in the other complaints referred to above, they are both clearly Afrophobic.

The key difference comes in where there is active incitement. Not only does the poster say there will be action – “We will be removing all illegal foreign nationals by force” – it also gives a date, time and place for when the action will be set to take place: “June 16th 8am, Diepkloof Hall”. It is the second element of incitement that took this post and several others reported to Real411, from the realms of repugnant xenophobia and Afrophobia to incitement and hate speech.

There were a series of complaints about similar content. It was clear that further action was necessary. Real411 can do certain things and not others. It can make outcomes, and where necessary, send takedown requests to platforms for content. Real411 also shares the outcomes with respective entities.

Real411 therefore routinely shares outcomes on Covid-19 with CovidComms for example, as well as with other key stakeholders. When it comes to hate speech and incitement, the South African Human Rights Commission (SAHRC)  is the body tasked with addressing and dealing with such complaints. As such, when the complaints were received they were marked as urgent, and within a few hours had been processed through the system. In addition to sharing with entities like Xenowatch we also shared them with the SAHRC.

In addition to sharing with the SAHRC, the posts, along with takedown requests, were sent to Facebook and Twitter. To their credit in less than 24 hours, all posts reported were removed. When Real411 alerted them to some repeated offenders the accounts in some instances were suspended and/or blocked. While clearly it cannot prevent the spread of the hatred, by acting swiftly and removing the content their further spread was limited, thus helping to de-escalate tensions.

The SAHRC was able to act swiftly as well as meet and engage with some of the leaders of the community. While there is no clear link that the intervention resulted in less violence, given the level of activity on social media and then the denials as to the core purpose of the march as stated in interviews with media who reported on the activities, it seems fair to suggest that tensions were reduced as a result of the intervention.

While there is a lot to be deeply concerned about, New Frame reported the response by “a broad coalition of organisations including grassroots groups, residents’ organisations, non-governmental organisations and the South African Federation of Trade Unions [Saftu] planned a counter march condemning xenophobic violence”. Those actions together with the swift response by the SAHRC and SAPS, meant that concerns about the threat of widespread looting and violence were able to be mitigated and limited. While, of course, the SAHRC may have already been aware of the threat, the alerts from Real411 provided them with evidence on which to go and engage.

There is a lot of content out there circulating on our social media platforms that may relate to, be deemed as, or blatantly include a number of digital harms, as we have seen from the examples above. It is critical that we all play our part in combating and mitigating these digital offences. If you suspect the content you come across could potentially be disinformation, hate speech, harassment of journalists or incitement to violence, there is something you can do about it. You can report it to Real411.

To make it even more simple, download the Real411 mobile app! Again, we take this chance to also remind you: We are approaching that magical period where political parties need to show us that they care, so in addition to asking about what they will do in your area, ask them to issue one public statement a month in the lead-up to elections that highlights and condemns any attacks on our journalists AND then to demonstrate what action they took to help combat that. If they are edgy or push some other bullshit agenda don’t vote for them because they don’t believe in democracy. DM