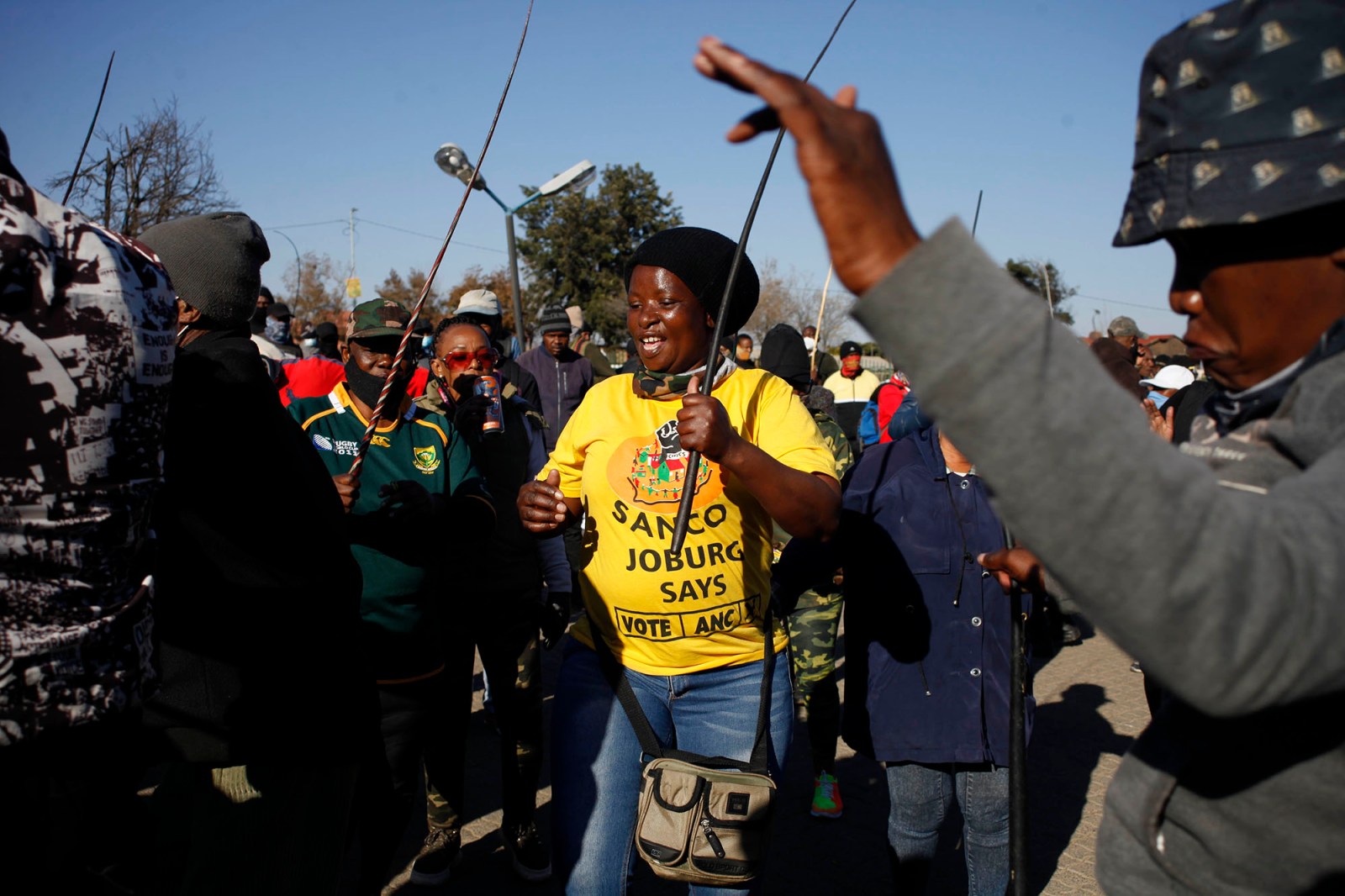 Dudula gained prominence last week when it organised an operation in Diepkloof that saw it and hundreds of Soweto residents confronting suspected drug dealers and illegal occupants of a supposed government property. The City of Johannesburg could not confirm ownership of the building from which eight families were evicted. (Photo: Oupa Nkosi)

Dudula gained prominence last week when it organised an operation that saw it and hundreds of Soweto residents confronting suspected drug dealers and illegal occupants of a supposed government property.

A group calling itself Dudula (Zulu for Bulldoze), which organised Soweto communities against foreign nationals, non-compliant businesses and drug dealers on 16 June, has gagged its members until a dedicated spokesperson is appointed.

Dudula gained prominence last week when it organised an operation that saw it and hundreds of Soweto residents confronting suspected drug dealers and illegal occupants of a supposed government property.

“Outside communication is currently strictly prohibited. They were saying, no guys, don’t entertain anyone so that should accountability issues come up, there is someone to take responsibility,” Dudula Chairperson Peter Dimba said on Monday.

Last week Dudula, buoyed by hundreds of Soweto residents who said they had had enough of their children’s drug addiction, forcefully removed illegal occupants of a building and confronted suspected drug dealers in Diepkloof. This happened in the presence of dozens of armed police officers.

The City of Johannesburg could not confirm ownership of the building from which the eight families were evicted. The families included foreign nationals and South Africans.

Zenzele Ntuli, a South African pensioner who was removed from the building by Dudula, said he had nowhere to go.

“This is a violation of our rights. Didn’t the government say that evictees must be given sufficient time to relocate?” asked Ntuli.

Business compliance was not an issue, because most foreigner-owned businesses were closed. Many had shut their doors on Tuesday afternoon after social media posts warning that they would be attacked on Wednesday, 16 June.

Only a few spaza shops were open and all of them belonged to locals. There was no effort to assess compliance in these shops.

Dudula has been accused of being xenophobic, which the leaders of the group denied.

“Since we started, we haven’t attacked any foreign nationals. In fact, the people we have confronted so far are mostly South Africans, so the media should not paint this otherwise,” said Nhlanhla Lux, one of the leaders.

However, a poster associated with the group’s 16 June operation told a different story: “We will be removing all illegal foreign nationals by force,” it read.

And Lux told the crowd on 16 June: “This war is not a war only against black foreigners; Chinese are also foreign nationals.”

Gauteng police spokesperson Kay Makhubele said, “Our role was just to monitor the situation. Remember, there was a threat where they said they will forcefully remove foreign nationals. Luckily, nothing happened.”

But Nelisiwe Manzini, accused of dealing in drugs, was attacked with a sjambok during the Dudula operation. Police officers watched as the Dudula members questioned Manzini.

Other house owners suspected of dealing in drugs were confronted and warned to refrain from selling drugs or face the wrath of the community.

Parents in Diepkloof said their children were unemployed and as a result had become slaves to drugs.

“My son has cleaned out my house. My duvets, pots and many other household items have been stolen,” said Maria Siphambo.

“He has vandalised the house to feed his addiction and I blame the drugs. The people who are killing our children should go.”

Diepkloof councillor Peter Ndou, through his chief of staff Solly Mogase, told Daily Maverick that he had not been consulted about the Dudula operation.

“No councillor was briefed on this matter. They did not contact us. We only became aware of what their intentions were through their flyer,” said Mogase.

“I don’t know what authority they had to conduct the operation. I want to believe that they are aware that conducting illegal operations infringes on the rights of the people. Nobody is allowed to go around removing people without a court order. This is breaking the law.”

However, Dimba said: “We cannot sit and watch our children’s futures go down the drain. We are not political, we just want to shine a light on the things that directly affect our communities. We are not vigilantes.”

Dimba condemned the looting that took place in parts of Soweto, including Naledi, Phiri and Diepkloof on the eve of the operation last Tuesday. He said the instigators of the looting were distorting Dudula and the community’s intentions.

The group vowed to maintain its momentum and ensure that drug dealers and non-compliant businesses were not allowed to operate.

The Institute for Security Studies’ Gareth Newham said it was very concerning when police officers fail to prevent unlawful acts from taking place, and that this undermines the rule of law and public legitimacy of the SAPS.

Newham said: “While in certain circumstances the police may not be able to act immediately because to do so may result in the escalation of violence which could lead to the unnecessary loss of life or property, they should take steps to arrest those responsible for breaking the law at a later time when it is more convenient to do so.