Violence at the end of Zuma and Malema’s failed politics 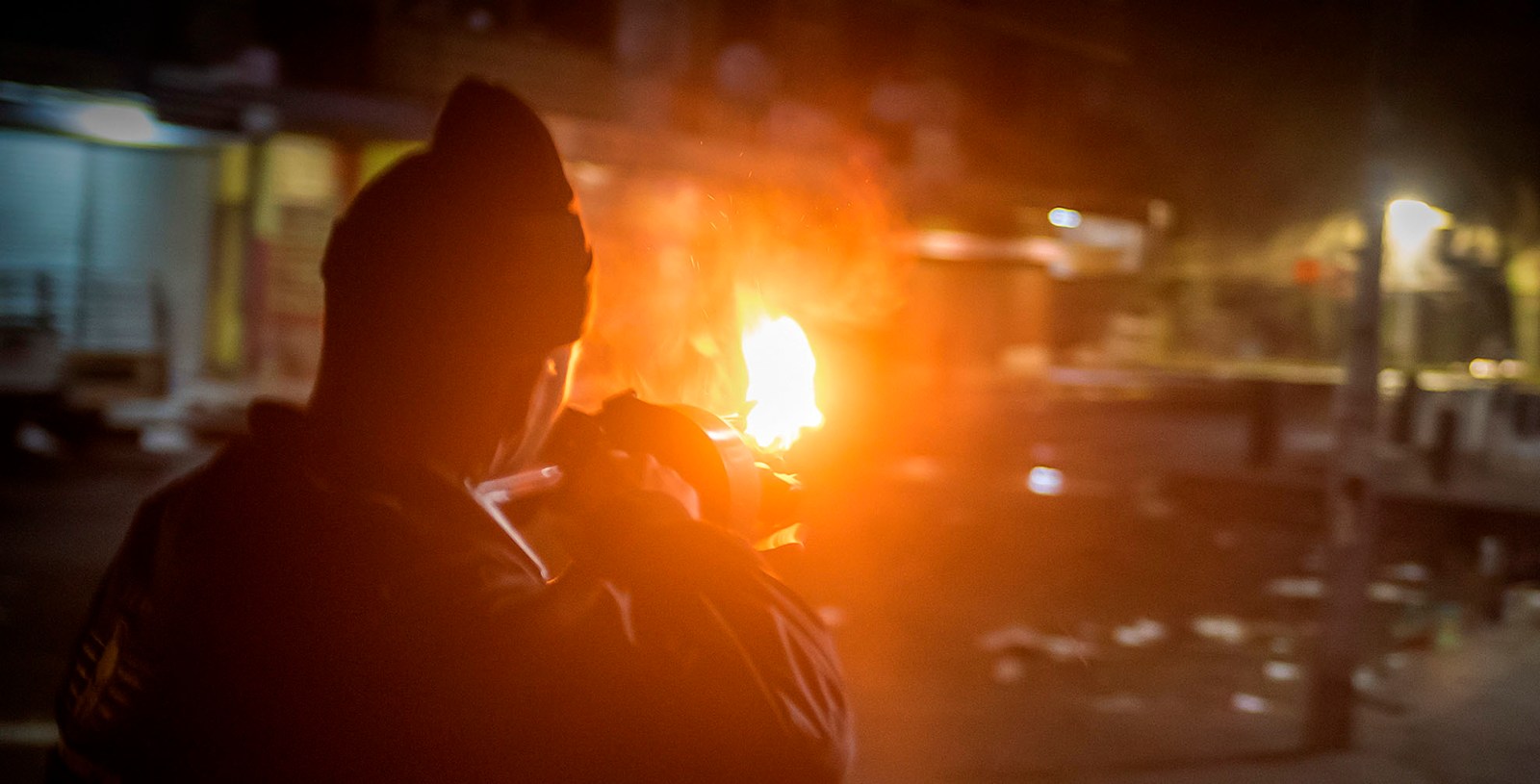 A member of private security company fires rubber bullets to disperse people in Hillbrow, Johannesburg on 11 July 2021. Security companies battled to disperse people and minimise damage in the city after several shops shops were also looted and damaged and cars were burnt as violence entered its 24th hour in Gauteng. (Photo: Shiraaz Mohamed)

It is now clear that the violence, which has included looting and political gestures, in the wake of the jailing of Jacob Zuma is an existential test for our state. It is also a test of whether violence can still work for political aims and whether it can be sustained, even if the aims are not purely political.

Many factors are responsible for this latest wave of violence, and while it does look like it was sparked by Jacob Zuma’s arrest, the big picture may be much more complicated than that. However, both Zuma’s refusal to denounce the violence (at his last public press briefing) and EFF leader Julius Malema’s encouragement suggests that these two populist politicians have run out of traditional options. They may now only have violence at their disposal because they failed to muster significant support for their agendas and themselves personally.

Amid this are questions of whether parts of the state, in particular the intelligence services, have failed, which in turn prompts a question about the degree of organisation of the events that have marred the past seven days.

Ours is a violent society and it cannot be denied that its roots run deep and far into history.

At present (informed as it is by the past), perhaps the biggest underlying problem (of many) is our racial inequality and poverty. There have been warnings for at least a decade, and probably much longer, that this was a ticking time bomb.

At Daily Maverick’s first Gathering in 2010 the then Cosatu general secretary, Zwelinzima Vavi, said the “poor who will one day march into the suburbs to demand the same living standards, and no wall will be high enough to stop them”.

Two years later Moeletsi Mbeki suggested there was a high chance that South Africa could go through a “Tunisian style revolution”.

There are millions of young people who are outside the system, know they are outside that system and know that the very same system doesn’t work for them. For them, the system is economically oppressive, it actively works against them and it has done that since they were failed by it in the foundation phase of their schooling.

Of course, a “Tunisian style revolution” has not happened, and the poor have not marched “into the suburbs to demand the same living standards”. Perhaps this is because while our youth unemployment figures are similar to countries where revolutions have occurred, we do not have repression.

People have freedom of speech that both allows them to speak out and allows political leaders to judge the temperature of the nation. This safety valve is denied to those leaders who insist on limiting freedom of speech.

However, the violence of this week suggests this safety valve has its limits.

And it should be remembered that other societies, with less inequality, have been beset by violence too. In the US, supporters of Donald Trump — people who might be considered rich compared with most in the world — stormed the Congress on 6 January. In London, there were violent scenes this past weekend sparked by the loss of a football match against Italy.

Meanwhile, other factors may also point to the timing of this violence.

In “normal times” there are several dynamics that increase the likelihood of protests. These include the failure of water and electricity services, the anticipation of elections, colder temperatures and lower incomes than a year previously.

All of those are present here. Water and power supply are so bad that some of the bigger metros are now affected. Local elections are due this year, this has been the coldest week of the year, and people have much less money than they did because of the Covid-19 lockdowns. All this led to warnings of a higher than usual number of protests.

In addition, people may feel that they have been locked up and unable to behave as normal because of the pandemic, which could add to the frustration.

This may explain why the violence has lasted so long and occurred in so many places.

But there are limits to how long it can last.

The power of the state is key here. If police officers and soldiers move in, mall by mall, and take control, looters and demonstrators would simply run away. There would be no incentive to stay. That would enable the state to take control of many areas quickly.

And if there is no real organisation to the “protests” they may be hard to sustain.

This takes us to one of the burning questions of the moment: why did our intelligence services fail to predict this and allow the state to take preventive measures? Which is really a question about if and how the “protests” and looting were organised.

If the violence, arson and looting are completely spontaneous, then it is understandable why it was not predicted, why the State Security Agency failed to foresee it.

There is some evidence of organisation. As Sbu Ngalwa writes in Daily Maverick, there are key figures who were involved in this. But these organisers were probably pushing an open door. If there was no pandemic, no failure of services, no slowing economy, no colder temperatures, along with better economic prospects, it would have been harder to start these events.

Even with a level of organisation, it may be hard to sustain this violence.

Then there is the role of political leaders.

President Cyril Ramaphosa has appealed for calm and sent in the army. He has also, twice, made the case for the rule of law and why it is important. It is in his interest to stop the violence as quickly and as completely as possible. He will be honest in his appeals. This is a situation where the person at the top matters. Here the interests of the president and the state are aligned, and that is a good thing.

This is a vital difference between our situation and that of Zimbabwe in the 1990s and early 2000s. There, the head of state actively supported people who were breaking the law during what were called “land grabs”. Here the head of state is supporting the rule of law.

The same may not necessarily be said for his predecessor. Zuma’s proxies have incited the violence and he himself made it clear during his last public press conference that he does not believe he bears any responsibility for any violence on the part of his supporters, a Trumpian statement to its core.

Meanwhile, Malema has tweeted that he opposes the deployment of the SANDF and that “all fighters must be ready… they won’t kill us all”.

He appears to be saying that his members must actively fight soldiers in the streets, an example of inferior logic.

This is an indication that both Zuma and Malema are inciting, or allowing the incitement of, this violence because they have no other options. There is no political way for them to achieve their aims.

In other words, both are unable to get mass support through democratic means, a sign of failure of both of their political projects.

The immediate question is, when will the violence end? And then, when the smoke clears, will our society have changed because of it? DM