Mantashe and Vavi, an uncomfortable marriage on show at...

Mantashe and Vavi, an uncomfortable marriage on show at The Gathering 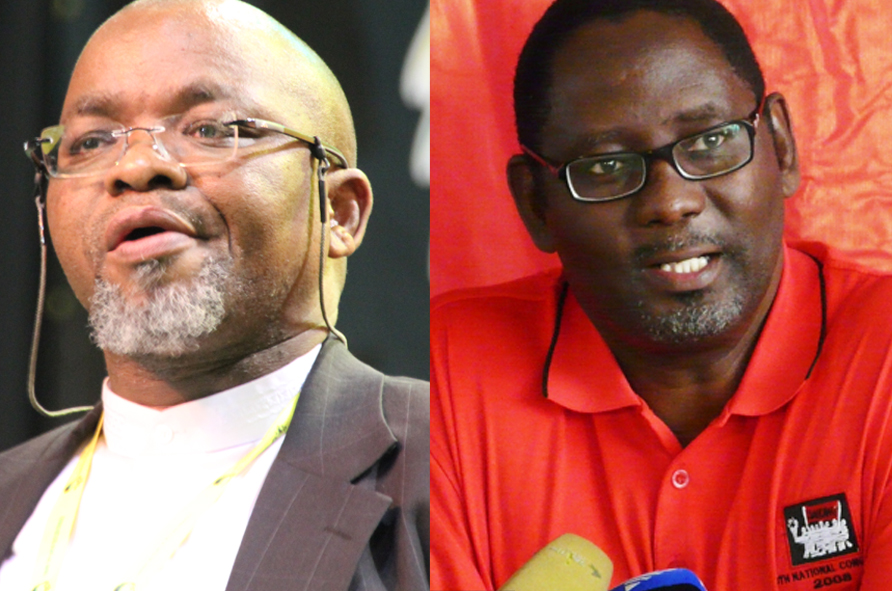 The atmosphere at The Gathering was hot and electrifying as Zwelinzima Vavi and Gwede Mantashe walked into Sandon's Theatre on the Square. There they were, two main characters in the political theatre that has had South Africa talking, ready to exchange blows. And they didn't disappoint. By STEPHEN GROOTES.

Well, we didn’t plan it like that. Really, we didn’t. But suddenly we had Zwelinzima Vavi approaching us (with two bodyguards – who were quite friendly, actually) across Sandton Square on one side, and Gwede Mantashe on the phone on the other. He had gone to the wrong place. But such is life, and a few minutes later he was striding across the square (sans guards), and ready to address everyone. There was a nervous moment when we had to explain to each that they were both here. And when Mantashe was asked where he would like to sit, it was a slightly grumpy “I’ll sit next to him”.

But there we were, at “The Gathering”, with the two biggest political newsmakers in the front. And once they were on the podium, they let rip. The soundbites went flying, and yes, the whole thing trended rather well on Twitter (we don’t like to boast, but it did trend at number four in the world at one point).

Vavi went first and launched another broadside at those “political hyenas” he so despises. He spoke about how they were “behaving with impunity like the warlords of KZN and Gauteng used to”. Then there was the attack against conspicuous consumption. Here’s the quote: “There are tenderpreneurs who think they have the right to eat off the half-naked bodies of hired black women.” That has to be one of his best. Three social comments in just one sentence.

But slightly more chillingly, he also spoke about the “poor who will one day march into the suburbs to demand the same living standards, and no wall will be high enough to stop them”. That’s the nightmare scenario, the townships, the shack-dwellers losing hope, getting so bloody angry at the Kenny Kunenes and white bankers of the world that they just say stuff it, we’ll take it from you.

It’s a stark warning, and he’s absolutely right to make it. Surely by now the poor and  forgotten of this country – and there are tens of millions of them – are on the verge of losing hope. Surely every front page picture of some rich person cavorting with sushi, with five flashy cars and political friends must be an almost-calculated insult. And yes, some middle-class people do stick out a little more as middle class than others. This message is something we should heed.

Vavi also spoke out against the Protection of Information Bill, saying it would stop the media reporting on corruption and would stop union members from blowing the whistle on corruption. It drew plenty of applause from the audience.

Gwede Mantashe was not so lucky. He’s not quite as popular with The Gathering crowd as Vavi. Speaking as the boss of the party in power that’s to be expected. But Mantashe being Mantashe, he gave it as good as he got. He really does get the point of debate, and he understands why sometimes it’s good to speak to a hostile audience.

He claimed the media was being intolerant by not even giving the arguments in favour of a media appeals tribunal a hearing. It’s an odd point to make, but deserves venting.

Mantashe also said his job as ANC secretary general was to make sure the ANC never resembled any one of the factions within it. It must be representative of all of them, he said. That’s probably what makes his job so difficult; it’s about balancing all the forces. That is also what makes him a good secretary general of a movement as fractious as the ANC.

Then a subtle statement about Sunday’s cabinet re-shuffle. He says South Africa is the only country where a president can “touch a minister who is seen as politically heavy and nothing happens”. It’s an interesting point, and yes, we do presume he’s talking about Siphiwe Nyanda.

On relations with Cosatu, the marriage metaphor came back with a vengeance. He said if you’re a married man, and you’re going to be out until 2am, you should call your wife, otherwise there will be drama if you just arrive home late. And that if you are going to flirt with dangerous people, we have a responsibility to tell you. It’s all about Cosatu’s civil society conference last week, you know, that caused all the trouble.

He also seemed to suggest that some of the civil society groups he caught Cosatu cosying up to may have motives that are against the ANC. He says they’re not being paranoid about this, but are actually worried. We think he’s trying to warn Cosatu against getting too friendly with organisations that are funded by foreign powers. Paranoid? You decide.

As this session wrapped up Vavi took the mike (to get the last word in) and said that in a marriage a partner didn’t get to ask what happened in every work meeting, because life isn’t like that and that would be too controlling. We wonder how much further they can stretch this honesty-in-marriage analogy.

A report on this would be incomplete without a mention of Twitter. It’s a hot political topic at the moment, thanks to those trendy people at the ANC Youth League. Mantashe was asked if he was on Twitter. He gave one of those wonderful Mantashe answers. He said he has two daughters. And that in his culture, “If your daughters move into a space, a father should leave that space to save himself embarrassment”. Of course, he’s quite right. But he went on to say there is a person impersonating him on Twitter. He says that person “speaks for me, he answers for me” and “I’m happy to let him continue”. Right. We’ll add that to the list of things he and Julius Malema disagree on then.

Overall, Mantashe and Vavi do seem to be a little tense with each other. They know each other very well, they come from a similar political background. But they are not getting on as well as they have in the past. But Vavi is unlikely to stop his thing, and Mantashe is unlikely to stop his. But they’re both grown-ups, and they’ll probably get over it. In the meantime though, it’s going to be great fun to watch them. As it was on Thursday at The Gathering. DM

Photo: A collage of The Daily Maverick photographs.