Liquor store owners terrified and devastated by looting, while industry calls for end to alcohol ban 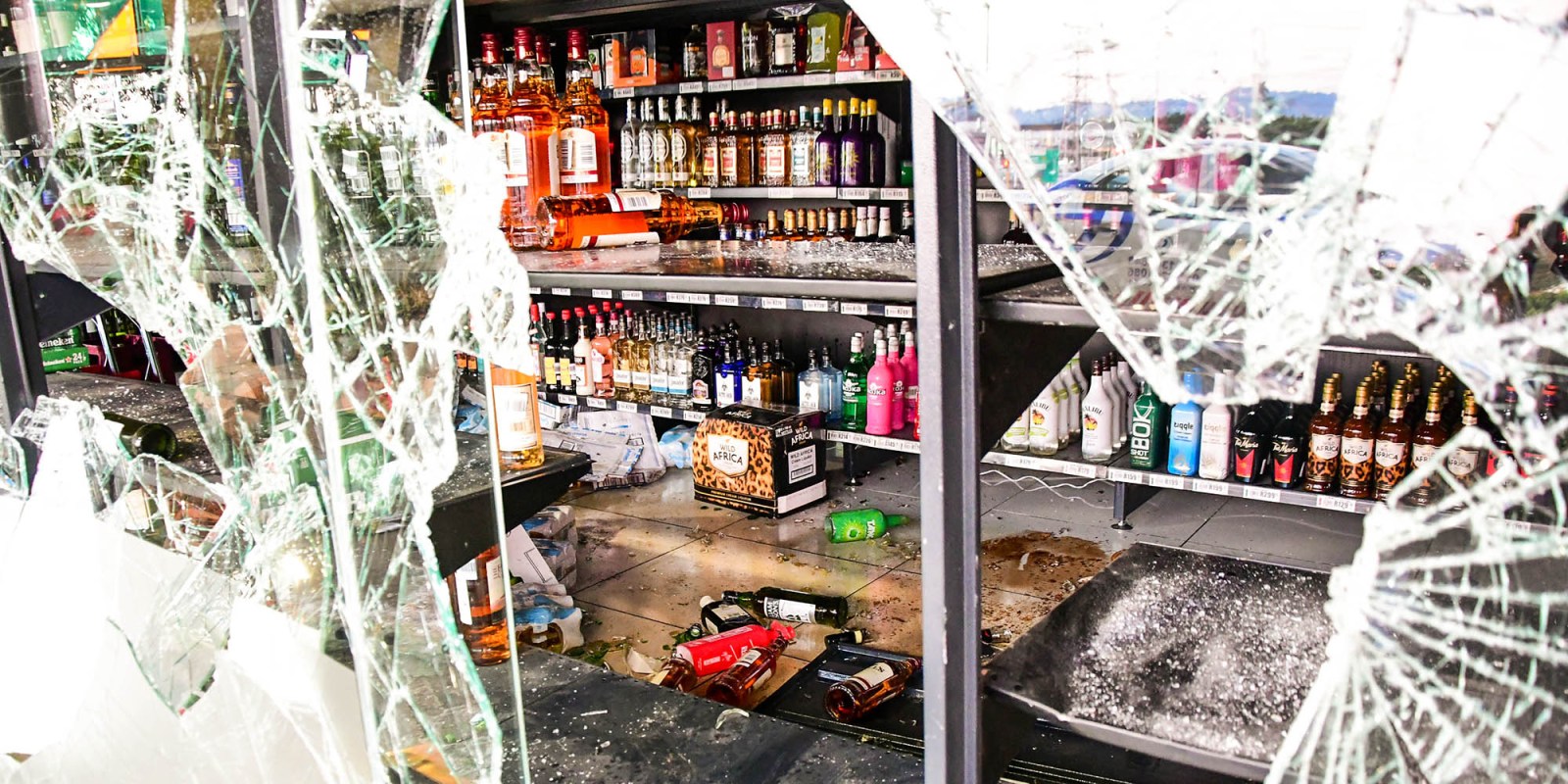 As looting in South Africa spreads, the main targets seem to be liquor stores. Rioters have emptied several retail outlets after the arrest of former president Jacob Zuma.

Sporadic looting incidents in the provinces of KwaZulu-Natal and Gauteng have taken the retail industry by storm, with alcohol a particular target after the Level 4 lockdown ban to curb the spread of Covid-19.

Several liquor stores have been looted in KZN and Gauteng, with major liquor retailers such as Ultra City being completely emptied of stock, the chain’s CEO Sean Robinson told Daily Maverick.

“Our business is obviously a little bit shaken by this,” Robinson said, adding that there was “significant anxiety, but there’s nothing we can do. Literally, we feel powerless, helpless.”

Robinson says about R12-million worth of stock has been looted, alongside computer equipment and damaged network systems.

“We’ve been locked down for two weeks so we haven’t had any sales. We’ve just been trying to protect our stock and our assets and our staff, and that’s currently almost impossible,” Robinson said.

South African Liquor Brand Owners’ Association chairperson Sibani Mngadi said in a joint industry statement calling for trade to reopen that liquor stores had been the target of organised crime.

“We had reports of thefts of stock at warehouses and retail premises in Pretoria, Boksburg, Durban and Bloemfontein. Now, with the political unrest rampant in KZN and Gauteng, this has become a firestorm,” Mngadi said.

The army has been deployed to help private security and the South African Police Service (SAPS). Business owners were advised to lock up because looters and protesters intended to cause mayhem. According to Bloomberg, 10 people have been shot. A separate death outside a liquor store was reported by the Sowetan.

Robinson suspects that alcohol has been particularly targeted during looting because of the alcohol ban under the Level 4 lockdown regulations to curb the spread of the virus and help relieve the strain on the healthcare system.

“The current liquor ban, I don’t think helps the looting because once it spreads and everybody can’t currently purchase liquor… I think it becomes, ‘well, let’s just loot the liquor stores’… it seems [the looting] is across the board. But I do think that liquor is being targeted,” the CEO said.

Vinpro MD Rico Basson said in the liquor industry statement, “Government’s failure to both adequately prepare the health facilities for possible dangerous additional waves and to administer an adequate and efficient vaccination roll-out cannot hold the alcohol industry at ransom any longer.”

The South African Liquor and Traders’ Association (Salta) spokesperson Martin Hlongwa told Daily Maverick he agreed that liquor stores had been particularly targeted because of the alcohol ban.

“The people are frustrated,” Hlongwa said. “If you close down the liquor industry, you are promoting anarchy and promoting illicit trade. People have been brewing concoctions to sell, but it’s taking a long time now. If people are frustrated and the rule of law is not recognised, they resort to looting to make a quick buck. The quickest way to get liquor is to target the liquor stores.”

Hlongwa said that Salta members were worried about looters moving into the townships and ravaging taverns’ existing stock.

“If [looters] can go to a well-secured place like a mall, what is an ordinary tavern? I think we will be the next targets, that’s what’s scaring the members,” said Hlongwa who also owns a tavern in Doornpark, Boksburg.

There hasn’t been an estimate of the damage caused by the looting, but Hlongwa said talks suggested it was “mind boggling” and in the billions, especially alongside the Level 4 restrictions on alcohol.

In the joint statement, National Liquor Traders convener Lucky Ntimane said the Level 4 ban had put more than 4,600 jobs at risk and more than 233,500 jobs on the line.

“Livelihoods [of tavern owners] are smashed — and the township economy — where much of the looting has occurred — has been shattered,” Ntimane said.

Hlongwa said tavern owners such as he were afraid to open business again because of safety issues and that their hope in the police was no longer intact because the police seemed “overwhelmed” by the looting.

“This is anarchy. They need the army. It’s like we’ve been invaded by a foreign force. They must take it as that,” Hlongwa said. DM/BM