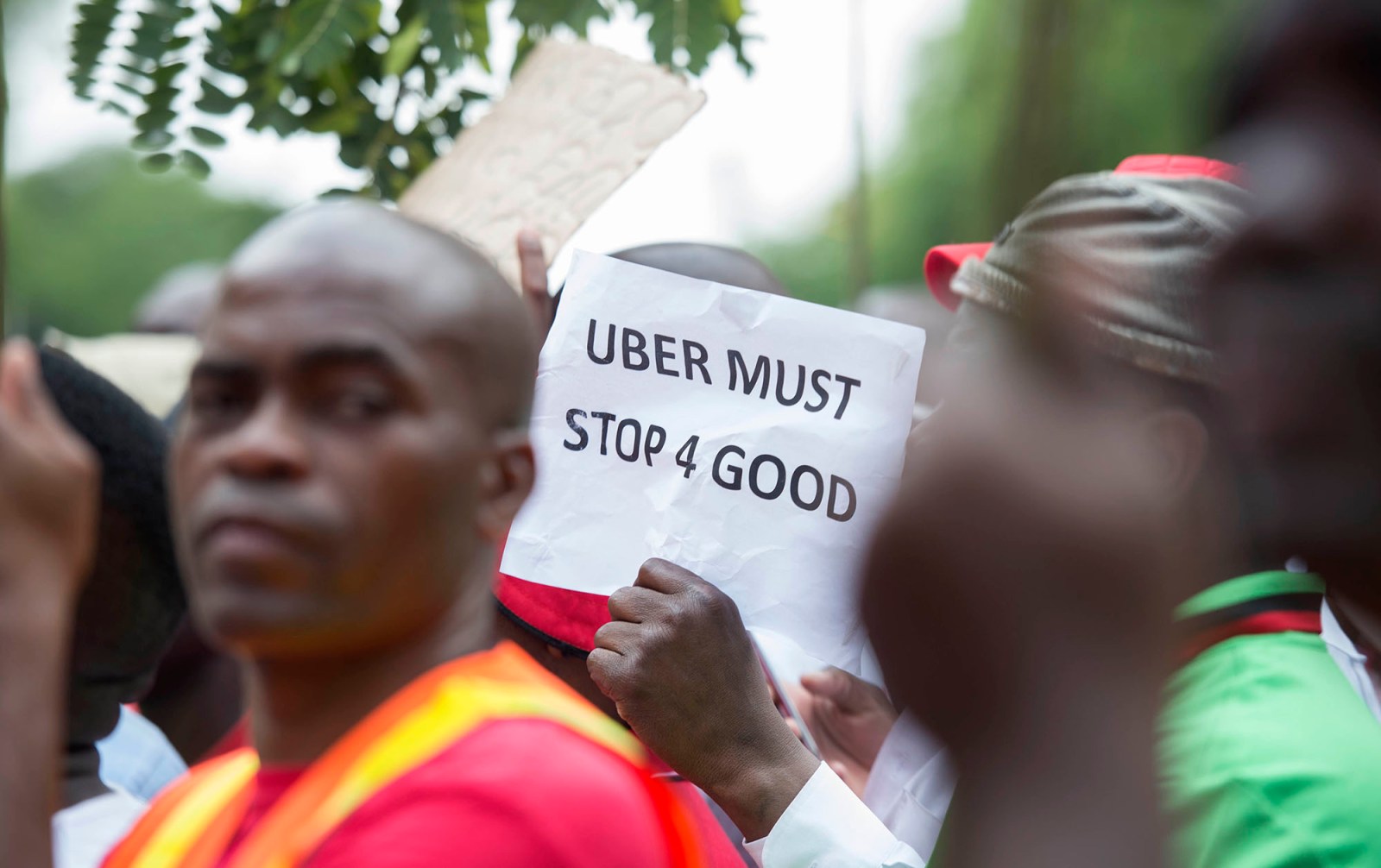 Meter taxi drivers and operators sing and chant outside the Department of Transport during a protest against Uber and Tuk-Tuk on 8 February 2017 in Pretoria. (Photo: Gallo Images / Beeld / Deaan Vivier)

Tensions are again soaring in and around the Pretoria Gautrain station between metered taxi drivers and their ride-hailing counterparts. The metered drivers have threatened ride-hailing drivers if they pick up their fares at the station.

It is not clear how long the latest flare-up has been going on, but some Uber drivers have told Daily Maverick that at the moment they dare not drive anywhere near the Pretoria Gautrain station.

“You cannot even drive to the nearby Mercedes Benz garage, Engen garage or anywhere near because they are everywhere,” said one Uber driver.

A security guard who said he worked for Uber said he was there to ensure Uber drivers’ safety and make sure they do not encroach on the routes they are prohibited from taking by metered taxi drivers.

“If you ask them to go anywhere near the Pretoria Gautrain station, you are sending them to their deaths,” he said.

At the height of the conflict between metered taxi and ride-hailing drivers in March 2018, the charred body of Siyabonga Langelihle Ngcobo, a Taxify driver (now Bolt) was discovered in the boot of his Chevrolet Aveo near the Unisa Sunnyside campus. He was only 21.

Ngcobo had a bright future ahead of him. At the time of his death, he was a sports management student at the Tshwane University of Technology. He had only been a Taxify driver for a week before the vehicle meant to help better his life ended up becoming his coffin. He was allegedly killed by metered taxi drivers.

His death sparked an outcry and other drivers went on the march, demanding justice. Tensions between metered taxi and ride-hailing drivers had been simmering since 2017 when Ngcobo was killed.

Ngcobo’s gruesome murder was not an isolated incident in an industry in which the arrival of ride-hailing services such as Uber and Taxify (Bolt) threatened the hegemony of metered taxis. In June 2017, an Uber driver died from severe burns after his car was torched, allegedly by metered taxi drivers, also in Pretoria.

Gauteng police spokesperson Captain Mavela Masondo told Daily Maverick at the time that police would intensify visibility at the hotspots. “The police will continue to monitor the groups and intensify police visibility at the hotspots to prevent crimes being committed,” he said. Masondo referred all other questions, including about the tensions in Pretoria, to the department of transport.

Hendrik Ndou, a leader of metered taxi drivers in Gauteng, admitted then that while the tensions were not limited to Pretoria, the reason the city was considered one of the hotspots was that metered taxi crews were based in the capital.

“It is worse in Pretoria because that is where we are based. When we engaged the department of transport and law enforcement, we did not get any assistance, so we decided to resolve it in our own way,” said Ndou at the time.

Approached for comment regarding the latest outbreak of hostilities, Ndou said he would welcome a meeting between metred and ride-hailing operators. He said the decision to bar Uber drivers from honouring pick-ups at the Pretoria Gautrain station was taken in consultation with Uber, which he said was represented in that meeting by Uber’s security team. However, some Uber drivers denied this was the case.

Ndou said Uber drivers were welcome to honour drop-offs at the Pretoria Gautrain station, but some Uber and Bolt drivers said this wasn’t true.

Requesting an Uber for pick-up at the Pretoria Gautrain station is not only dangerous to the drivers, but also the company’s clients. Instead of honouring the pick-ups, drivers call the customer and ask them to walk almost a kilometre to the MBT garage. This puts people’s safety at risk.

“In the beginning, we met with Uber leadership, who were represented by their security team, and agreed that they would not honour pick-ups at the Pretoria Gautrain station, but should do so at the MBT garage formerly known as Caltex garage,” Ndou said.

He said the dispute between metred and ride-hailing services arose from the latter’s continued operations without licences and non-regulation in the sector.

“It’s about the permits… Ubers do not have permits. We have been saying from 2016, let them have permits so that they can be able to operate and compete with us on an equal footing,” said Ndou.

Gareth Taylor, Bolt regional manager for southern Africa, said that “Bolt eagerly awaits the president’s assent to the National Land Transport Amendment Bill as soon as possible, to provide an enabling and predictable regulatory framework which leverages the already significant contribution of e-hailing to a safe, reliable, affordable and competitive transport eco-system in South Africa.”

In March 2020, Parliament passed the bill, which provides a dedicated regulatory dispensation for e-hailing services as a mode of public transport, and it awaits President Cyril Ramaphosa’s signature.

In early 2018, at the height of the conflict in Johannesburg and Pretoria, law enforcement officials from the Johannesburg Metro Police Department (JMPD), Ekurhuleni Metropolitan Police Department (EMPD) and officials from the Department of Community Safety briefed the Gauteng legislature’s committee on roads and transport on plans to deal with violence between the drivers. Regulating the industry, which was one of the considerations, has not been accomplished.

In 2019, Pietermaritzburg metered taxi operators warned of a brewing war with ride-hailing drivers. They claimed that Uber and Taxify had stolen almost 70% of their business and threatened their existence. They raised the same issue of unregulated ride-hailing services.

Often when clashes between the two groups break out, the immediate response from the police has been to deploy officers to the hotspots. But as soon as things seem to have calmed down, the police are recalled.

Earlier this year, metered taxi drivers met Gauteng transport MEC Jacob Mamabolo on the issue of regulation of e-hailing services. The meeting was preceded by a march by ride-hailing drivers to transport minister Fikile Mbalula to demand regulation of the sector.

Ndou acknowledged that interventions to bring peace and stability to the sector had failed.

Daily Maverick established from several Uber drivers that the conflict, especially in the area around the Pretoria Gautrain station, had been ongoing since tensions first surfaced in 2017. They said that metered taxi drivers had recently intensified their hunt for those who encroached on what they considered their turf.

“They have teams who monitor any sign of our cars in the vicinity of the Pretoria Gautrain station,” said an Uber driver.

“They don’t want us there. We do not go anywhere near the Pretoria Gautrain station. I’m sorry you had to walk all the way but we cannot risk our lives,” apologised an Uber driver who picked up this reporter on 25 June.

While it was difficult to establish the status of Ngcobo’s case, his employer, Bolt, pointed out that three years after his murder, his family had still not attained justice. Taylor said Bolt could not divulge details of the case because it was still under investigation.

Ndou said that “the government has failed to regulate ride-hailing services such as Uber and Bolt, and the department of transport could therefore not issue them permits”.

But Taylor said that “drivers operating on and using the Bolt platform comply with all necessary regulatory requirements. In this regard, operating permit and licence application processes for drivers using e-hailing services should be streamlined and standardised across all provinces to ensure regulatory certainty.” DM