Taxify Death: No arrests yet as protesters demand justice for driver who was burnt alive 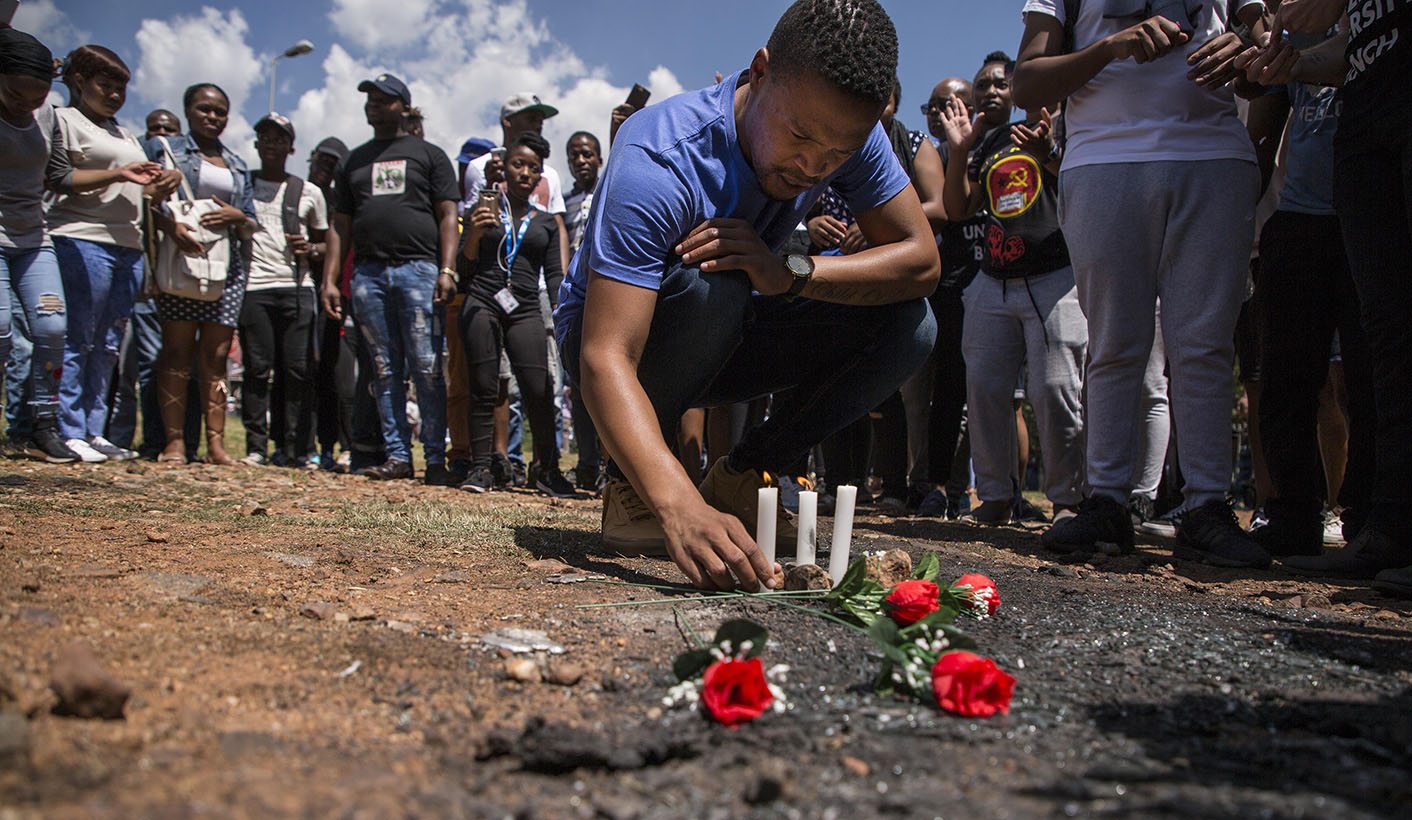 Activists from the NGO Not In My Name were joined by hundreds of drivers from e-hailing services such as Uber and Taxify as they took to the streets of Pretoria in protest on Friday. Demonstrators demanded justice and accountability for the brutal murder of 21-year-old taxify driver, Siyabonga Ngcobo. By DAILY MAVERICK STAFF REPORTER.

Over a week ago, near Unisa’s Sunnyside campus, Siyabonga Ngcobo was kidnapped and forced into the boot of the car he was driving. The vehicle was then set alight. When police arrived they found the charred remains of the young man’s body in the boot of the incinerated car. He had been burnt beyond recognition and it would be a full week before his family could claim his remains from the local mortuary.

On Friday protesters, among them Unisa students, gathered outside the Tshwane University of Technology (TUT) in Arcadia to demand justice for Ngcobo.

David Magwaza, a second-year student, said he was angered by the murder of a fellow student and is hoping that the killers will be brought to justice.

“The guy was just 21, the same age as myself. We can’t continue like this in South Africa where you are killed for trying to make a living. It’s madness,” said Magwaza.

Ngcobo was in his final year of studies at TUT and was hoping to graduate with a qualification in sports management. According to his family he began working for Taxify in order to earn money to pay for his studies and course material.

Romeo Patamphaga, a Taxify driver who was part of the protest, said drivers are operating in a climate of fear and intimidation.

“I’m fearing for my own safety. Every time when I leave the house I’m not sure if I’m going to come back alive or in ashes,” said Patamphaga.

Donald Appani, a leader from a Taxify drivers’ group in Pretoria, said he was at a loss for words with regards to the murder of Ngcobo.

“The feeling is unexplainable. We are extremely saddened, hurt and filled with pain. We are not going to fight back. We are just in need of justice from the government and need to be protected by our police,” said Appani.

Numerous other drivers gave examples of how they are intimidated daily by drivers of metered taxis. Some areas such as Gautrain stations were identified as hot spots and drivers appealed to police to show more visibility and to tackle the intimidation faced by drivers and customers of e-hailing services.

The march ended at the open piece of land near Unisa’s Sunnyside campus where Ngcobo’s torched car and burnt body was found. Some protesters laid flowers and candles on the ground, which, a week later, was still blackened from the fire.

Speakers addressed the crowd and called for newly appointed transport minister Blade Nzimande to address the matter urgently. Nzimande was scheduled to meet with Ngcobo’s family at the same time as the protest was held.

Nosipho Mathenjwa, Ngcobo’s aunt, expressed gratitude for the support the family had received. But she said the family was concerned at the slow pace of the police investigations into the case.

“It’s eight days later and we still have no idea who killed our son. I’m appealing to South Africa not to stop this movement even if we find Siyabonga’s killers. We must keep fighting for those kids who have dreams and want to do something, but then they get murdered,” said Mathenjwa.

On a visit to the Ngcobo family earlier in the week, MEC for roads and transport Ismail Vadi said those responsible for the murder of the youngster had crossed a line.

Vadi said the suspects were not known as yet but if it was found that the meter taxi industry was behind the murder, the department would consider shutting down meter taxi operations in the province.

“Should evidence point in the direction of the meter taxi industry, if we have to shut down all operations of meter taxis in this province we will do so. We can’t carry on like this,” said Vadi. DM