Peekaboo! Boks and British & Irish Lions coyly reveal parts of their strategy to each other 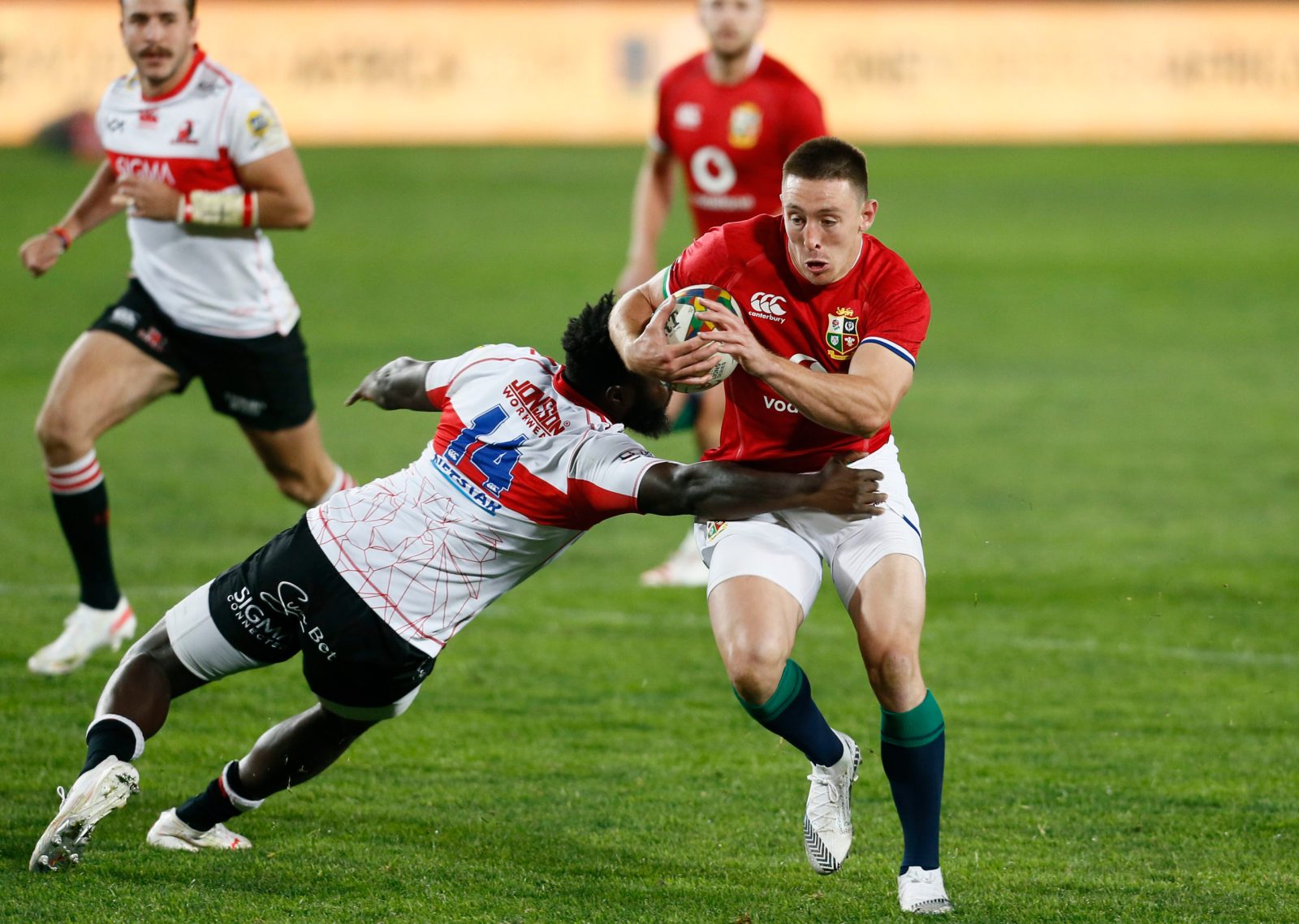 Josh Adams of the British & Irish Lions in action with Jamba Olengo of the Emirates Lions during their clash on Saturday 3 July 2021 at Emirates Airline Park in Johannesburg. (Photo: Felix Dlangamandla / Daily Maverick)

The curtains have been drawn back and both the Springboks and the British & Irish Lions have coyly revealed a little of themselves to each other after an opening tour weekend on opposite sides of the Jukskei River.

British & Irish Lions coach Warren Gatland was a keen spectator of the Springboks’ 40-9 win in the first Test against Georgia at Loftus Versfeld on Friday night.

The Lions’ mentor would have been searching for clues to something new from the Boks; something unseen from their previous outings at Rugby World Cup 2019. He might have come away slightly disappointed, but not surprised.

Similarly, Bok coach Jacques Nienaber and his staff watched the tourists’ 56-14 romp over an understrength local Lions franchise and wouldn’t have gleaned much.

The Boks revealed nothing new from their previous outing 20 months ago when they famously beat England 32-12 in Yokohama to win the Webb Ellis Cup. As then, in Pretoria on Friday the forwards dominated the set pieces, the bench came on and continued to grind Georgia down and the defence was watertight.

From an attacking perspective, the Boks were rusty and the backline largely misfired. A couple of long-range tries, though, showed that the world champions can conjure up magic by “playing the situation”. But as an exercise in learning anything new about the Boks, it was fruitless for the Lions.

One thing the tourists would have noted was that Director of Rugby Rassie Erasmus acted as “water boy” for the Boks against Georgia. When Erasmus was head coach at RWC 2019 and Nienaber was defence coach, the roles were reversed.

Nienaber was Erasmus’s voice on the field to the players during games between 2018-19 and now that he is head coach, regulations demand he occupies the coach’s box in the stands. But Erasmus has no official coaching role with the Bok team. He is deployed in any way they see fit, and he has become the coaching extension in the thick of the action.

“It was nice for me in terms of being able to chat with Rassie and him giving me feedback from the players and running water on the side,” said Nienaber after the match.

“Hats off to him for wanting to do that. Rassie and I have always worked a little bit out of the box. Obviously, I can’t be on the side of the field… so hopefully he makes himself available for the next game as well.”

Gatland said he wasn’t surprised by the Bok performance, which started slowly but built up promisingly throughout the 80 minutes.

“The Boks got some dominance and when they got ahead they looked to start and play some rugby,” Gatland said. “There is no doubt they showed what they are capable of doing with their line-out drives and strong individual runners.

“That did not surprise us. They will definitely improve next week — with combinations and being together. The South African coaches, just like us, will be looking to improve from week to week, as they have more time together training and get a couple of games under the belt.”

The British & Irish Lions were clinical in their dismantling of a very weak local Lions at Ellis Park on Saturday. The tourists’ lineout purred and they defended well the few times they were asked to repel continual attacks on their line.

Midway through the first half, the tourists had a 10-minute period where they were under pressure close to their line. They were forced to maintain structure and discipline on defence as they tackled ferociously and judiciously.

They didn’t over-commit numbers and ensured that they had enough troops on their feet to repel the next wave of white-shirted pressure.

Admittedly, the local Lions lacked nous and simply tried to bludgeon through a red wall with one-off runners, but the British & Irish Lions never lost shape or enthusiasm for the task. There will be plenty tougher defensive examinations to come on this tour, so this was a good marker.

Still, Gatland was hoping for more from the provincial games his side plays before coming up against the Boks in the first Test on 24 July.

“We went in with a bit of a game plan,” Gatland said. “They probably did not pressure us as much on defence as we had expected. We were able to change the way we played, so that was a pretty good reaction.

“I was just really pleased with the energy out there and the enthusiasm of the guys. It was a really positive start.

“In 2009 we did not come up against any of the Test players in the warm-up games and we were probably a little bit underdone.

“So, we are going to have to work really hard in training to get the sort of physicality that is required. Some of the games are going to be a little harder, hopefully, but we understand that there are players out of the [franchise] sides because they are in the Springbok camp.”

Snyman out of Lions series

Bok lock RG Snyman, one of the infamous “fire-pit four” has undergone an operation for skin grafts and is set to miss the series against the British & Irish Lions.

Bok forwards’ coach Deon Davids confirmed the news on Sunday, which could pose some second-row problems for the pack. Eben Etzebeth sustained a rib injury against Georgia, which is another concern. Rib injuries are notoriously difficult to treat and if it is serious the Boks will be very thin in that area.

Lood de Jager has not played a full match in months and is still working his way back from a horrific injury in early April. De Jager broke his tibia, damaged his ankle and tore the medial meniscus in a freak training accident with English club Sale. But he is ready to play this week against Georgia although it’s unlikely he will have a full 80 minutes.

“RG Snyman is currently out of the squad. He’s not with us, he went for a skin graft operation. Obviously, he will start the process of rehabilitation, and as he recovers and we get medical updates, he will return back into the squad,” Davids said at a media briefing on Sunday.

“At this stage, I think there’s a small chance that he will be part of the British & Irish Lions Test series. But he will definitely return to the group for the remainder of the year’s Test matches that lie ahead in the Rugby Championship and the end-of-the-year tour.”

Indefatigable Bok flank Pieter-Steph du Toit, who has played the bulk of his career at lock, could be used in the second row again if Etzebeth is also ruled out for any length of time.

Du Toit, who has been a revelation at blindside flank since a permanent switch to the position in 2018, was not opposed to a return to lock if it meant helping the team out.

“I’ll play wherever I’m needed,” was Du Toit’s succinct take on the situation. The Bok coaching staff will only move their star flank out of the back row in an emergency, though.

Davids was happy with the first outing 608 days since they last played together, but said the team would be better in the second Test against Georgia after some needed game time.

“We must understand that the Springboks have just come back, they haven’t played for a long time and we could see that at the beginning of our game,” Davids said.

“We had to get used to the level of intensity and physicality. We spoke about it at half time and the players responded tremendously.

“We saw the longer the game went on, the more into our stride we got and the more physical we were. There are obviously things we will look to apply in the second game and the players themselves have said there are definitely things they can do better.

“They certainly challenged our set-pieces, but our lineout had a 94% success rate and we scored two maul tries, while in the scrums there was only one penalty against us and four or five for us.

“It’s a process of building towards the Lions series and overall we are pleased.” DM