Arming the Philippines: It’s a Duterte job, but does Britain have to do it? 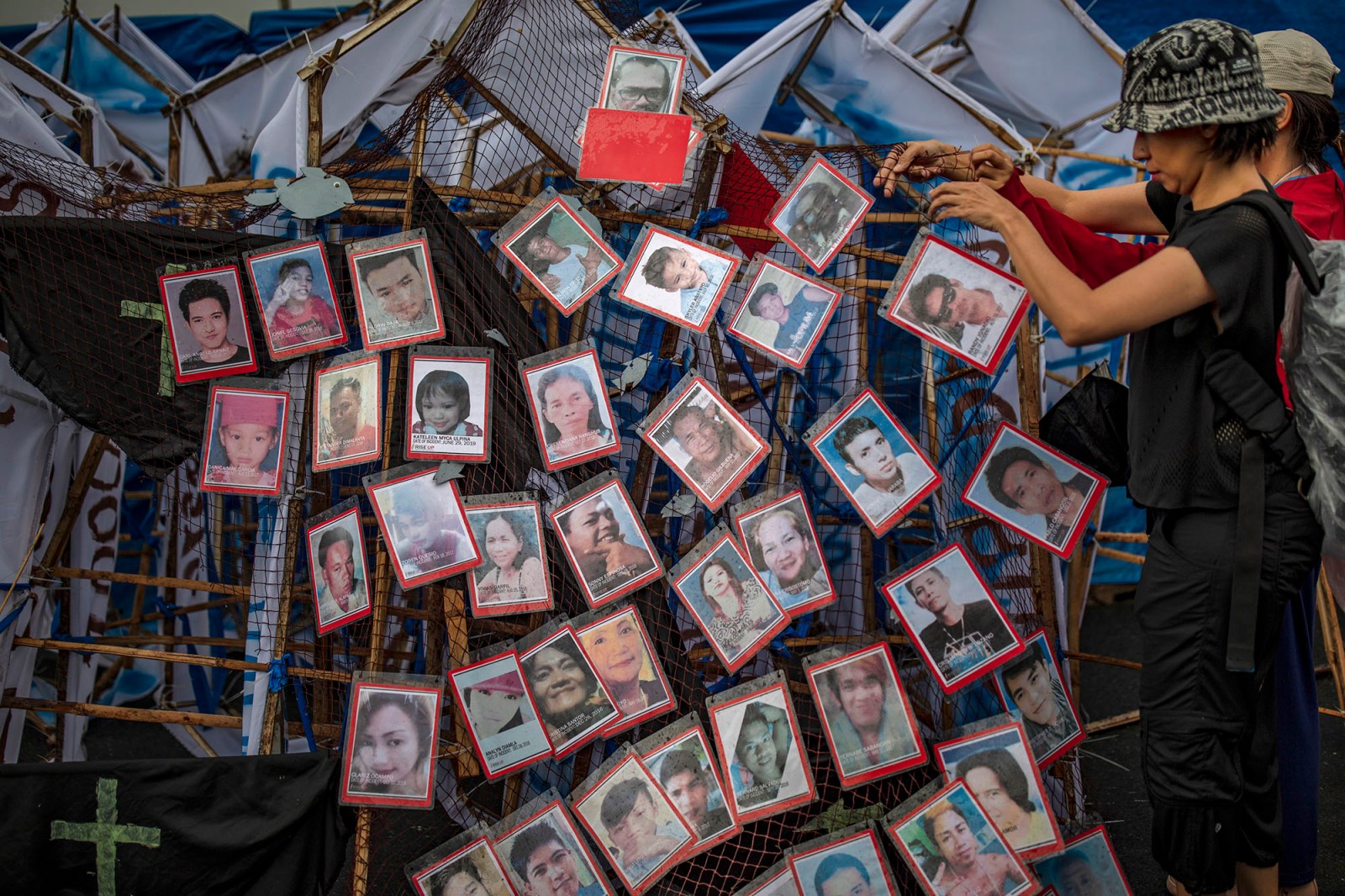 Thousands of people have been killed in the Philippines under President Rodrigo Duterte, but the UK has massively increased arms exports to his authoritarian regime and is prioritising trade and investment with the country — partly as a post-Brexit bulwark against China.

Using the tawdry alibi of anti-drugs and anti-terrorism, police and hitmen acting on the wishes of President Rodrigo Duterte of the Philippines have summarily executed 27,000-30,000 people over the last five years.

The impressive economic growth that keeps Duterte popular among voters is sustained by the Philippines’ gainful business relationships with Britain, the US and the European Union.

But this succour from the UK is driven less by ideological sympathy with homicidal autocracy than with Britain’s new economic and geopolitical ambitions as it adapts to Brexit and the rise of China.

Though the atrocities have rightly drawn opprobrium from some British journalists and MPs, Duterte’s vicious military apparatus is also directly facilitated by UK arms manufacturers.

Since Duterte took office in 2016, the British government has authorised the export of £93-million worth of military equipment to the Philippines, according to the Campaign Against Arms Trade.

This is an 878% increase on the figure (£9.5-million) for the previous five years (2011-2016) during the presidency of the late Benigno “Noynoy” Aquino, whose Liberal Party is more ideologically attuned to the West.

As well as “small arms ammunition”, “weapon sights” and other items that repress ordinary Filipinos, £56-million worth of Anglo-Italian Wildcat attack helicopters were sold to Duterte last summer.

The UK government claims that it “regularly” raises concerns about “troubling human rights issues in the Philippines”. But the UK also trains the Philippine military and says it “routinely” coaches its officer cadets in army, navy and air force academies in Britain.

The British government describes its relationship with the Philippines as “strong and wide-ranging” and involves “high-level discussions” on defence.

When UK foreign minister Nigel Adams visited the capital, Manila, last year, he wrote that “we can strengthen our links on defence, security and counter-terrorism”.

Such relations are in sharp contrast to the arms embargoes the UK has in place against states including China, Russia and Libya, purportedly due to human rights concerns.

The Philippines is also exempt from the broader trade and investment sanctions against states such as Equatorial Guinea, Myanmar, Venezuela and other developing world nations deemed oppressive and unfree.

Quite the opposite attitude to the Philippines pertains. Following the disquieting claim by the UK’s then trade secretary Liam Fox in 2017 that Britain and Duterte’s Philippines have “shared values” — a claim which outraged activists — trade between the two nations leaped by 500% in 2018-19 (£383-million to £2.3-billion).

According to Boris Johnson’s trade envoy to the Philippines, Richard Graham, who visited Manila in February last year, the UK is importing large amounts of fish, fruit and other agricultural items, and exporting tech products for the aerospace and automotive industries.

Around 200 British companies are flourishing in the Philippines, including banks such as HSBC and Standard Chartered, fossil fuel firms like Shell, plus the famous brands River Island, AstraZeneca, JCB and Marks & Spencer.

Britain is now “one of the largest foreign investors in the Philippines”, boasts the UK government’s website, and UK companies have holdings in “power, energy, agri-business, transport, water and financial services”.

Inducements include an educated, English-speaking workforce, an “expanding consumer base” and a free market economy, states Whitehall’s current guidance for exporters. There are also hopes that UK manufacturing concerns will decamp from China to the Philippines, Graham said during his trip.

There are bigger motives behind this courting of the Philippines and a harsher line towards China. In what has been termed “the new Cold War”, Washington is escalating its military presence in the Philippines, amongst other Asian nations, as a bulwark against growing Chinese economic clout.

Its martial provocations include deploying warships to the Taiwan Strait and South China Sea.

Ever the US’ foreign policy “lapdog”, the UK’s own new emphasis on the Pacific has included dispatching a naval flotilla to the South China Sea and instituting fresh economic sanctions against China.

Furthermore, Brexit has forced British capitalism to seek out new markets beyond Europe, with profit trumping ethics, as with the arms export bonanzas not only to the Philippines but other states with dubious human rights records such as Taiwan, Indonesia and South Korea, worth a total of £662-million in 2019-20.

This is presumably what, in 2018, then foreign secretary Jeremy Hunt had in mind when he vowed to “strengthen Britain’s links” with “dynamic” Asian economies.

In that same article, Hunt stated unconvincingly that Britain would operate in the new Asia according to standards of “fairness and democracy”. But he avoided the dilemma of Brexit compelling London to make friends with undemocratic states in the region.

It fell instead to Alex Salmond, the former first minister of Scotland, to suggest in a 2017 House of Commons debate that Liam Fox had embarrassed himself in Manila because “in this Brexit world, the prime minister is desperate to obtain trade deals with anybody or nobody”.

In another attempt in parliament to hold the Conservative government to account, Labour MP Helen Goodman asked Mark Field, then Minister for Asia and the Pacific, what exactly were the shared values between Britain and a draconian leader who said he would “eat the livers of terrorists with salt and vinegar”.

Field’s mealy-mouthed response was that such values referred to trade and not to the extra-judicial killings, a concern which the government was “continuing to raise” with Manila.

In the four years since he said that, though, the UK has carried on bolstering Duterte militarily and financially — and there has been no let-up in the slaughter.

Britain isn’t alone in wanting to cash in on Philippine authoritarianism. Not to be outdone by its former member state, European Union countries have sold €300-million worth of arms to Duterte over the last three years.

Different financial worries may be pushing the Union — seen naively by liberals as a bastion of humane conduct — to strike more deals with inhumane governments abroad, Duterte’s included.

While China’s economy is recovering well from Covid, the EU’s endured a record 9.5% contraction last year, prompting a re-evaluation of its foreign relations.

The European Parliament has repeatedly condemned Duterte and some of its MPs want to exclude the Philippines from the EU’s preferential trade arrangements. But overall, money has once again prevailed over morality and EU countries are the major investors in the Philippines, to the tune of €14.4-billion last year.

Despite passing legislation last January placing travel bans on certain Filipino officials, the United States is in the process of vending their country $2-billion worth of S-7oi Black Hawk assault helicopters, plus a further $126-million of military boats and associated equipment.

But the weapon most commonly used by Duterte’s death squads is the handgun, and the Philippines was the fifth-biggest purchaser of American models in 2020 — 11,110 in total.

Since 2015 — shortly before Duterte was elected — the US has given the Philippines $765-million in military aid. Late the following year, the US withdrew its funding to the “law enforcement” units guilty of the extra-legal slayings.

The US, UK and EU’s hypocritical posture of using one hand to feed Duterte, while with the other, slapping him on the wrist, is matched by a cognitive dissonance amongst the Western liberal commentariat.

Their outrage at Duterte’s human rights violations seems insincere and performative because it seldom recognises that the West is fuelling these crimes.

For these pundits the blame lies almost anywhere else: the dysfunctional internal politics of the Philippines or China’s underwriting of Duterte, which admittedly reached a record high of $830-million worth of investments in 2018 and is set to include a $500-million arms exports “wishlist”.

Tom Sykes has reported on the Philippines for Private Eye, Monocle, Red Pepper, Morning Star and Southeast Asia Globe. His new book, Imagining Manila: Literature, Empire and Orientalism is published by Bloomsbury/IB Tauris. He is Senior Lecturer in Creative Writing at the University of Portsmouth.